While many in the United States were sleeping, the Dodgers and Diamondbacks played the second game of MLB's Opening Series from Australia.

Featuring an intriguing matchup between starters Hyun-Jin Ryu and Trevor Cahill, Game 2 had everything you were looking for in a baseball game -- lots of runs, ridiculous Yasiel Puig moments and some delicious, delicious food: 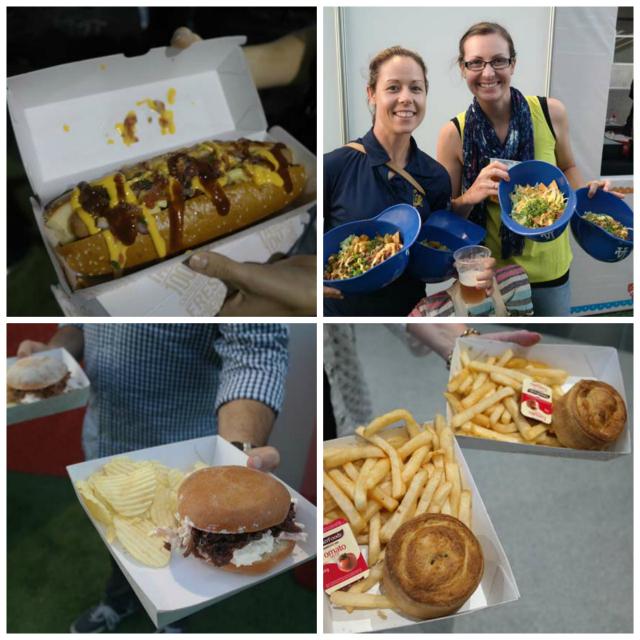 The MLB Network broadcast team brought in Australian Cricket Hall of Famer Ian Chappell to help give viewers an Aussie's perspective on the game, and Chappell came dressed to impress:

Of course, when it was time to play the game, the players came prepared too.

In the top of the first inning, the Dodgers took an early lead when Andre Ethier brought Yasiel Puig home on a line drive to center. The Dodger fans (and Yankee fans) were happy to see it: Then, in the top of the third, Puig stepped to the plate with runners on second and third. The right fielder slapped the first pitch he saw through to left field, giving Los Angeles a 2-0 lead.

The Australian fans got the full Puig experience, however, as the Cuban immediately tried to take the extra base and got caught in a pickle:

In the fourth inning, with the Dodgers leading 3-0, Puig-mania continued. The young right fielder took a Trevor Cahill offering to the arm and proceeded to take his free base. But, Puig being Puig, he added in a bat flip:

As the game continued on to the fifth frame, the Dodger offense just kept coming -- this time with Adrian Gonzalez drawing a leadoff walk. Then, despite the fact that he'd only stolen five bases in his career, Gonzalez took off for second ... and made it:

And he was pretty excited:

"Who is the @MLB all-time stolen base leader in Australia? Me." -@AdrianTitan23

The fifth wound up being a big inning for the Dodgers when Gonzalez scored on a double play, and Juan Uribe brought a runner home with a double to left field, increasing the lead to 5-0:

Dodgers starter Hyun-Jin Ryu had a strong outing, going five innings and allowing only two hits, and surely these South Korea supporters were thrilled to see it: In the bottom of the eighth inning, with the Dodgers having extended their lead to 7-0, the D-backs finally started to get their offense going. Third baseman Martin Prado drew a one-out walk, and catcher Miguel Montero followed him up with a single.

Then, offseason acquisition Mark Trumbo came to the plate and got his first hit as a member of the Diamondbacks -- an RBI single to right, shrinking the deficit to 7-1:

As the game moved to its final inning, the D-backs piled on the pressure via a two-run single from Prado. And then, Trumbo followed it up with two RBIs of his own -- but his were a bit louder:

Unfortunately, it wouldn't prove to be enough -- the Dodgers went on to win the game by a score of 7-5.

While the Dodgers will be happy to take a two-game division lead home with them, the fans in Australia were absolutely thrilled with the Opening Series, no matter the result: