Which team's postseason superfan is the most stylish?

Which MLB superfan has the most style?

At Major League Baseball stadiums across the country, there are fans and there are superfans. Because the regular season shook out the way that it did, we're lucky enough to have at least two bonafide superfans gracing us with their presence in the postseason. On the NL side is faithful Pirates fan Burgh Man:

Pittsburgh fans are the best in the world! Wait 'til we win the World Series !!! pic.twitter.com/bEFdqaxc0A

And representing the AL is loyal Tigers follower Jim Nelle. 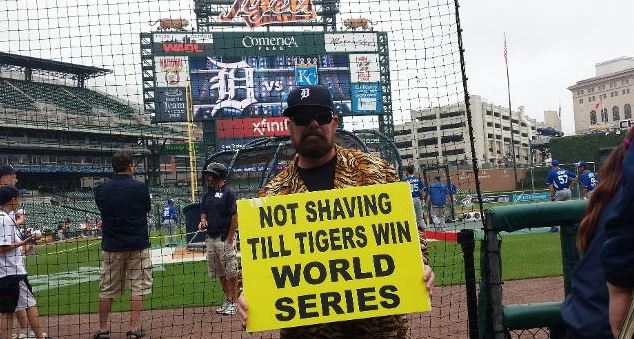 Obviously, each of these illustrious gentlemen is supporting his team to the max. But like in the games on the field, there can only be one champion. So let's break down the superfan super-fashion:

Nelle is probably the only fan who goes to Tigers games dressed as, well, a business tiger. But it's getting pretty close to Halloween and you can probably cop one of his signature suits at any costume superstore. We're pretty sure you can't go online and order a generic juggling/rollerblading/light-up super hero costume. +1 Burgh Man.

A striped tiger suit is pretty flashy, but Burgh Man actually lights up. He and his LED getup definitely take this category. +1 Burgh Man.

Nelle has vowed not to shave until the Tigers win the World Series. In most scenarios, a guy who hasn't shaved in six months is probably considered to have lesser grooming habits that a guy who shaves regularly. But, this is baseball and The Beard probably harnesses a secret power that will help propel the Tigers to success. +1 Nelle.

Unless Burgh Man has an actual utility belt, we're going to have to side with Nelle on this one. Footwear with wheels simply isn't practical for the MLB postseason (or any social situation, really). +1 Nelle.

Part of the appeal of superfandom is getting noticed by fellow fans and the baseball community at-large. Nelle has a pretty big following and has had his picture taken with a bunch of Tigers players. He says he gets spotted and takes photos with fans all the time.

Meanwhile, Burgh Man had an actual holiday declared in his honor by the City of Pittsburgh. He's also got an official website and Twitter feed. That, and he's got his own van. +1 Burgh Man.

Come on Pirates, you have to tighten up! We aren't losing this season. I am Burgh Man and I approve this message. pic.twitter.com/XaKwkhQ5ia

Pittsburgh fans are the best in the world! Wait 'til we win the World Series !!! pic.twitter.com/bEFdqaxc0A