January 15th is the new July 2nd. The date has changed, but the excitement and its significance to baseball remains the same. Because of the COVID-19 pandemic, the international signing period that was scheduled to begin on July 2, 2020, starts today and ends on Dec. 15, 2021. The future

The date has changed, but the excitement and its significance to baseball remains the same.

Because of the COVID-19 pandemic, the international signing period that was scheduled to begin on July 2, 2020, starts today and ends on Dec. 15, 2021.

The future is now. 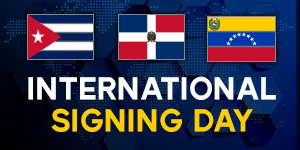 “The COVID-19 pandemic disrupted the game of baseball at all levels. The start of this signing period is an important step back toward normal life for players, trainers and all who help to grow the game of baseball around the world,” said Morgan Sword, MLB's Executive Vice President, Baseball Operations. “We congratulate all of the players who will sign professional contracts in the coming days. This contract is the culmination of a lifetime of hard work for them, their families and all who supported their development.”

Some of the biggest names in baseball -- players like , , , and many other young stars -- were picked up during the international signing period. Emerging prospects like Wander Franco (Rays), (Braves), Julio Rodríguez (Mariners), Marco Luciano (Giants) and Noelvi Marte (Mariners) were also signed during their respective international period. There are hundreds of prospects signed during the period who are developing in the Minor Leagues and others that will be packaged in trades.

And more future stars are on the way.

“This is an exciting day each year when a new class of the best players from around the world enter the professional game,” Sword said. “There are some exceptionally talented players in this class that will reach the Major Leagues very quickly, and we’re looking forward to watching them develop.”

Headlining this year’s class is Yoelqui Céspedes, the younger half-brother of free-agent outfielder Yoenis Céspedes. At age 23, Yoelqui could be the first player in the group to reach the Major Leagues. He is considered a five-tool player with above-average tools across the board. The outfield prospect defected from the Cuban National Team in June 2019 while participating in the Can-Am League in New York, and while in Cuba, he played for his country’s World Baseball Classic and Caribbean Series teams. He also starred for Granma in Cuba’s Serie Nacional from 2015-17.

Follow @JesseSanchezMLB and @MLBPipeline for all of the details.

Below is a look at which players from MLB.com’s Top 30 International Prospects lists have agreed to terms with clubs, and for how much. Unless otherwise noted, clubs have not confirmed the deals.

The market is still to be determined for prospects No. 2 Oscar Colas and shortstop Dyan Jorge (No. 20).

What are the rules?

An international player is eligible to sign with a Major League team between Jan. 15 and Dec. 15, 2021. He must turn 16 before he signs. In practical terms, that means players born after Sept. 1, 2004, are eligible to sign.

Players have to be registered with Major League Baseball in advance in order to be eligible to sign.

How much money does each team have to spend?

Teams cannot trade bonus pool money for the 2020-21 period. Signing bonuses of $10,000 or less do not count toward a club's bonus pool, and foreign professional players who are at least 25 years of age and have played in a foreign league for at least six seasons are also exempt.

Which teams will be the most active?

Every team is expected to be active as front offices across the league understand the importance of acquiring international talent. The bonus pool system has created parity on the international market.

The White Sox are among the teams making a big splash on the market, agreeing to deals with a pair of high-profile players in Céspedes and Norge Vera. The Dodgers, Nationals, Twins, Rays, Indians, Tigers and Astros are also being aggressive. Add the D-backs, Royals, Padres, Brewers and Angels to the large list of clubs that will sign players through the period.