Yankees Magazine: Ol' Blue Eyes and the song we know by heart

King of the hill. Top of the heap. A-number-one. Everything that George Steinbrenner ever wanted his Yankees to be can be found in the lyrics of a song, one that has been played after each game in the Bronx for parts of four decades.

Frank Sinatra's powerful vocals to "New York, New York" have provided a bright, celebratory anthem following the final out of each Yankees victory. And it has been the reassuring refrain that has followed the fans as they exit any defeat, confidently boasting of better days ahead.

Is it any wonder why The Boss handpicked Sinatra's "New York, New York" to blare through Yankee Stadium's speakers night after night? 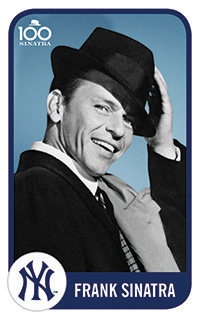 By the time Greene -- who served as the Yankees' media relations director from 1986 until 1989 -- got there, it was being played regularly, he said, adding that in those days, "in-game entertainment was whatever George wanted."

And The Boss wanted Sinatra's "New York, New York" for the Stadium from the moment he heard it played in the spring of 1980, upon its release by Reprise Records.

"It was George's idea," said Larry Wahl, Steinbrenner's media relations chief in 1980. The proof is in a collection of short notes in The New York Times dated June 30, 1980, under the subhead "Going Out in Style."

According to the Times' story, Sinatra's version of "New York, New York" was "chosen by the team's principal owner, George Steinbrenner, as an appropriate theme by which to exit Yankee Stadium."

The Boss had first heard it played at Le Club, a now-defunct nightspot in Manhattan's East 50s that catered to the rich and famous.

An article on the website NewYorkNatives.com described Le Club as "ultra-private" and once owned by fashion designer Oleg Cassini and his younger brother, Igor Cassini. It was a destination where on any given night the likes of Jackie Onassis, Al Pacino, Mike Nichols or Diana Ross could be seen -- as well as Le Club board member George M. Steinbrenner III.

Le Club was a discotheque at heart, but "New York, New York" made the playlist. The Boss asked Le Club's disc jockey, Ricardo Irvin, to tape the song for him.

"Mr. Steinbrenner really liked it," Irvin told TheTimes 35 years ago. "I noticed he was always dancing to that song."

According to the article, The Boss soon dashed off a letter to Sinatra's agent, and Ol' Blue Eyes responded. Sinatra said he'd "be very pleased to have the song played at the Stadium," said John Fugazy, a former Yankees vice president of marketing, as quoted in TheTimes' article.

"We'd just like to have [Sinatra] here to see the response," Fugazy continued. "After one game, I noticed people who were standing in the aisles or at their seats listening or singing the song. And this was after the team lost. The song makes you feel like you'll win tomorrow anyway."

Accompanying the article is a cartoon of a smiling Sinatra, holding a mic and wearing a pinstriped jersey, with a swooning Steinbrenner standing nearby.

The line was recalled by Marty Appel, a former Yankees media relations director and author of several authoritative books on the team, including 2012's Pinstripe Empire, which chronicles the Yankees from their inception.

As one of Steinbrenner's original limited partners, "Nederlander was good counsel to him," Appel said. And the Nederlander connection influenced the inner showman in Steinbrenner, who invested in six Broadway shows -- from the Tony Award-winning Applause in 1970 to the musical Legs Diamond in 1988.

"Steinbrenner had a good sense of theatrics in the ballpark," Appel said, and The Boss would bounce those ideas off Nederlander.

But Steinbrenner, who could play a piano and sang in the Williams College glee club, had his own ear for music.

Shortly after Steinbrenner's death in 2010, Playbill quoted Nederlander from a 1977 issue of Sports Illustrated, saying, "If George were in the theater exclusively, he'd be another Mike Todd or Ziegfeld."

"He had a flair for excitement," Nederlander said recently. "And that's what made the Yankees. He went out and bought stars -- Dave Winfield, Catfish Hunter -- and he stuck to that and made a success."

Although it became a Sinatra concert staple, the city's unofficial song -- and the most popularly played tune at both the remodeled and current Yankee Stadium -- "New York, New York" was not created to serve any of those entities. It was written by John Kander and Fred Ebb for Liza Minnelli. And it was composed for director Martin Scorsese's 1977 picture New York, New York, set in the postwar 1940s and co-starring Robert DeNiro as a saxophone player.

As such, it should be noted that the song's official title is "Theme from 'New York, New York,'" so as not to be confused with the tune "New York, New York" from the musical On the Town with lyrics by Adolph Green and Betty Comden and music by Leonard Bernstein.

(In the 1949 film version of On the Town, Sinatra, Gene Kelly and Jules Munshin sing "New York, New York" -- "The Bronx is up and the Battery's down, the people ride in a hole in the ground" -- in sailor suits at various city landmarks.)

Kander and Ebb's "New York, New York" was first brought to Sinatra's attention by Frank Military, a legendary and genial music publisher whose association with Sinatra would last more than 40 years.

According to Will Friedwald's well-detailed book on Sinatra's music, Sinatra! The Song is You, Sinatra began doing "New York, New York" in concert in October 1978, when the Yankees were marching to a second straight world championship.

Both World Series titles came at the expense of the Los Angeles Dodgers, where Sinatra's true rooting interest lay. He also had a long-standing friendship with Manager Tommy Lasorda.

"In those days, George controlled every ticket," said Morabito.

Steinbrenner gave his instant approval, and Sinatra came, although he sat behind the Dodgers' dugout for the first two innings. Afterward, Sinatra got up and went to his Yankees dugout seats "and Lasorda went ballistic."

"Oh, what you did to my Dodgers," Sinatra lamented from the stage of Radio City Music Hall, as recalled by Rick Cerrone, who attended Sinatra's Oct. 14-22 engagement that intersected with the '78 World Series.

Cerrone would become the Yankees' longest-tenured media relations director under Steinbrenner, serving from 1996 to 2006.

On tour with "New York, New York," Sinatra began shaping the song into its familiar version, where the dramatic pause at the crescendo sets up the theatrical finish. But in a Manhattan studio, Sinatra did not care for his first recorded go at "New York, New York" in August 1979 for Trilogy, a three-album set representing the past, present and future.

By then, Sinatra's mature baritone had taken hold at Yankee Stadium, though "New York, New York" might first have been played only after Yankees wins -- following the reading of the scoreboard totals by legendary public-address announcer Bob Sheppard -- according to Cerrone's recollection as a fan.

Prior to "New York, New York," it's assumed that organist Eddie Layton played as the fans departed. But as a first foray into recorded music at the Stadium, Cerrone recalls hearing a loopy disco version of "Yankee Doodle Dandy" when the remodeled Stadium opened in 1976.

Minnelli's version, especially, was associated with having been played after Yankees losses, though there's no evidence of it being a hard-and-fast rule. And then, it just faded away altogether.

But at least once, the Academy Award- and Tony Award-winning daughter of Judy Garland had a signature Yankees moment with the song.

To borrow a phrase from Casey Stengel, "You could look it up." There is actually video of Minnelli belting out a version of "New York, New York" on stage at Radio City in 1982, accompanied by seven members of that year's Yankees. The performance happened during the Night of 100 Stars television special and included Ron Guidry, Willie Randolph, Bucky Dent, Bob Watson, Rick Cerone, Dave Collins and Jerry Mumphrey -- in uniform -- dancing and singing along with Minnelli.

That little Broadway-style number continued to play through the lows and highs of the team's next 14 years. And on an October night in 1996 when the Stadium shook as a Joe Girardi triple helped spark a three-run inning against Atlanta Braves ace Greg Maddux on the Yankees' way to a Game 6 win, the sound above all the bedlam -- moments after the last out of the World Series was secured in Charlie Hayes' glove to end an 18-year championship drought -- was Sinatra singing.