Jose Valverde was a true shutdown closer for Detroit in 2011, leading the Majors with 49 saves and placing fifth in AL Cy Young voting. Papa Grande's 2012 was rockier, as he converted 35 of 40 regular season save chances before flaming out spectacularly to the tune of nine earned runs in 2 2/3 October innings.

After finding a slow market for his services last winter, Valverde re-signed with the Tigers on a Minor League deal in early April. Eleven weeks and 20 appearances later, he was designated to assignment on Friday.

Part I: The Rise

Unless something changes, no deal is coming from the Tigers, who have said from the start of the offseason to as recently as about a week ago that they would not be bringing back Valverde. Rookie Bruce Rondon threw his first perfect inning Thursday against the Mets in his bid to claim a share of the closer's job. Detroit could give him the job outright or use him in a closer-by-committee situation.

The Tigers bid farewell to Jose Valverde last fall to make way for rookie Bruce Rondon to compete for their closer job. While Rondon opens the year at Triple-A Toledo instead, Valverde has lingered on the free-agent market long enough to see his old team go into the season with a closer-by-committee that doesn't include a clear closer preference.

A reunion between Valverde and the Tigers is characterized as highly unlikely, despite the team's current situation. Still, some wonder whether Valverde's agent, Scott Boras, might re-engage the club and its ownership now that plans have changed.

"From my position, you don't leave any stone unturned," Dombrowski said. "You do whatever you can to make your club better. We do not have a dominant closer and most clubs that have a chance to win have a closer. That doesn't mean you can't win by mixing and matching either, but right now we're in a situation where we're mixing and matching and if the situation ends up being better with Papa Grande, with Rondon, with whomever it may during times, we're open-minded to that."

Boras said that Valverde had other offers, but that the familiarity with the Tigers and the opportunity to fill save situations on a contending team made it an obvious choice.

Boras said that he expects Valverde to report to Tigers extended spring training this weekend and pick up his throwing program. He has been throwing bullpen sessions every other day in the Dominican Republic, but he hasn't been throwing to hitters. On the day that Jose Valverde began working out for the Tigers at their Spring Training complex, manager Jim Leyland reiterated his stance on his bullpen.

"On a lot of the days, if it's doable, I think [Joaquin] Benoit is the most experienced and versatile enough against righties and lefties to pitch the ninth," Leyland said. "But it's not going to be doable every day. You're liable to see anybody at any time ... until something else happens, if it does happen."

Though the original plan called for Valverde to face more advanced hitters at Triple-A Toledo before the Tigers decided whether to sign him to a Major League deal, team president/general manager Dave Dombrowski indicated earlier this week they wouldn't necessarily need to do that. It's possible the Tigers could make a decision as soon as next week. The Tigers' bullpen by committee is over. The Grande return of the closer is here.

Six months after the Tigers bid farewell to Jose Valverde, they welcomed him back Tuesday, signing him to a one-year Major League contract. If they take a lead into the ninth inning Wednesday night, he'll try to close out a win.

April 24:  "Tigers wise to bring back Valverde as closer"

The Tigers have blown three of their six save chances, and with a team that could have the best rotation and one of the five best offenses, the lack of a closer is a glaring weakness. Leyland has already said that Valverde will go right back to closing games, thus allowing Joaquin Benoit to return to his eighth-inning role and Phil Coke, Al Alburquerque and others to have the earlier innings. 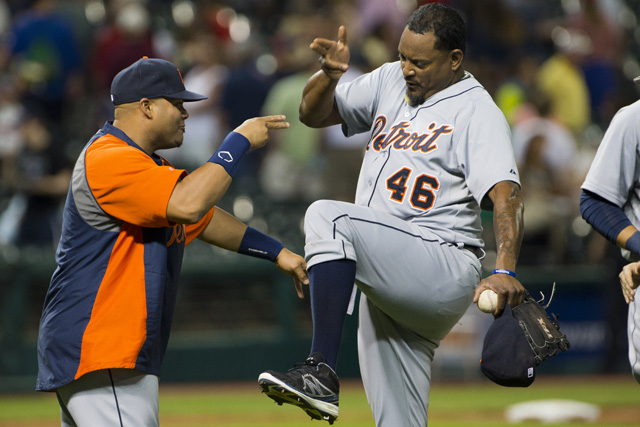 May 2:  "Valverde happy for return to closer's role"

"I enjoy my game," said Valverde, flashing that perpetual smile. "You have to enjoy every good moment. When you have a bad moment, you have to throw it away. I'll always be the same."

"We think we need to get him in better pitching shape -- not physical shape," manager Jim Leyland said. "He looks good physically. He's not too heavy or out of shape. … Valverde's in good shape, but not probably pitching shape. We felt like it's important to get him out there and pitch him a little bit, continue to build the arm strength up."

Valverde threw 10 pitches, eight for strikes, on his way to retiring the side in order in the ninth. He threw three splitters, including a called third strike on Carlos Pena to end the game.

May 16:  "Leyland 'thrilled' to have Valverde as closer"

"I don't know why I keep getting questions about Valverde," Leyland said. "I'm thrilled to have him back."

May 30:   "Valverde can't shut door for Scherzer vs. Orioles"

And just when Leyland felt like his bullpen was falling into place behind Valverde, who had seemingly settled in with some efficiency despite the drama, the Tigers lost when leading after eight innings for the third time this year.

"There's nothing you can do, just get ready for tomorrow," Valverde said. "It's over. I feel bad for us, for Max [Scherzer], because he threw a good game. He put the game in my hands."

Despite Jim Leyland expressing frustration over a game his closer let get away in the ninth inning Friday, Valverde's status moving forward was never in question.

"He's done a good job so far," manager Jim Leyland said Saturday. "He let one get away last night."

Friday's was the second blown save in seven opportunities for Valverde.

The Tigers were one strike away from shutting out the Royals and taking a road series, and Verlander was a strike away from another win in Kansas City. One swing from Lorenzo Cain on Valverde's splitter turned the questions around. It marked the second time in a week-and-a-half that a ninth-inning comeback has left a pitching gem by a Tigers starter unrewarded.
...
At some point very soon, the Tigers will have to figure out their plans for the stretch run, and decide their needs ahead of next month's Non-waiver Trade Deadline. As such, they'll have to evaluate whether Valverde is their closer from there on out, and whether closer prospect Bruce Rondon is ready for a Major League role, closer or otherwise.

After his third blown save of the season on Wednesday in Kansas City, questions have cropped up about Jose Valverde's role as the Tigers' closer.

While media and fans alike have suggested several different answers, Tigers manager Jim Leyland firmly stated he will stick with Valverde for those final outs. If the Tigers' closer situation is starting to feel like a soap opera to you, manager Jim Leyland can relate.

When Leyland was asked Monday afternoon how he would handle the ninth inning, he made the analogy.

Before Jose Valverde rejoined the Tigers at the end of April, manager Jim Leyland had a bullpen by committee, but had Joaquin Benoit as his preferred option.

Eight weeks and a Valverde comeback later, they're pretty much back to that setup. The only difference now is that they have a deposed closer in the mix.

"I'm not naming anybody closer," Leyland said Thursday. "I'm just saying that if Benoit's available right now, I would probably try to close with him, if he's fresh and available."

After manager Jim Leyland announced Thursday that Joaquin Benoit would pitch the ninth inning when "healthy and available," the Tigers designated Jose Valverde for assignment Friday.

Valverde has struggled in his last eight outings, allowing 11 earned runs in 7 1/3 innings with two blown saves. In the ninth inning Wednesday against the Orioles in a non-save situation, he gave up four earned runs on 10 pitches.

"I think the reality is that we didn't really think he would hit this point, but he did," president/general manager Dave Dombrowski said. "He's struggled, and sometimes when you get in a struggle and you get in a downward spiral, you can't get out of it. I think that's where he is right now, and we think that hopefully we can help him get out of it at the Triple-A level, but it would be difficult to do here right now."