Just as Major League teams rely on their wizened advance scouts to scope out the competition and prepare their teams, fans also need to know what they're getting into when they head to a new ballpark. And while there are plenty of places to go to find out about the players or where the bathrooms are located, we know what you really care about: the food.

So if you're planning on taking a trip to Houston any time soon to check out world's shortest second baseman, Jose Altuve or the world's sassiest mascot, Orbit, here's the best foodstuffs to stuff in your foodhole.

Note: all the grades are on the traditional 20-80 scouting scale, with 50 being Major League average, 60 being an above average Major Leaguer that would garner a few All-Star games, and 80 just absolutely outrageous. 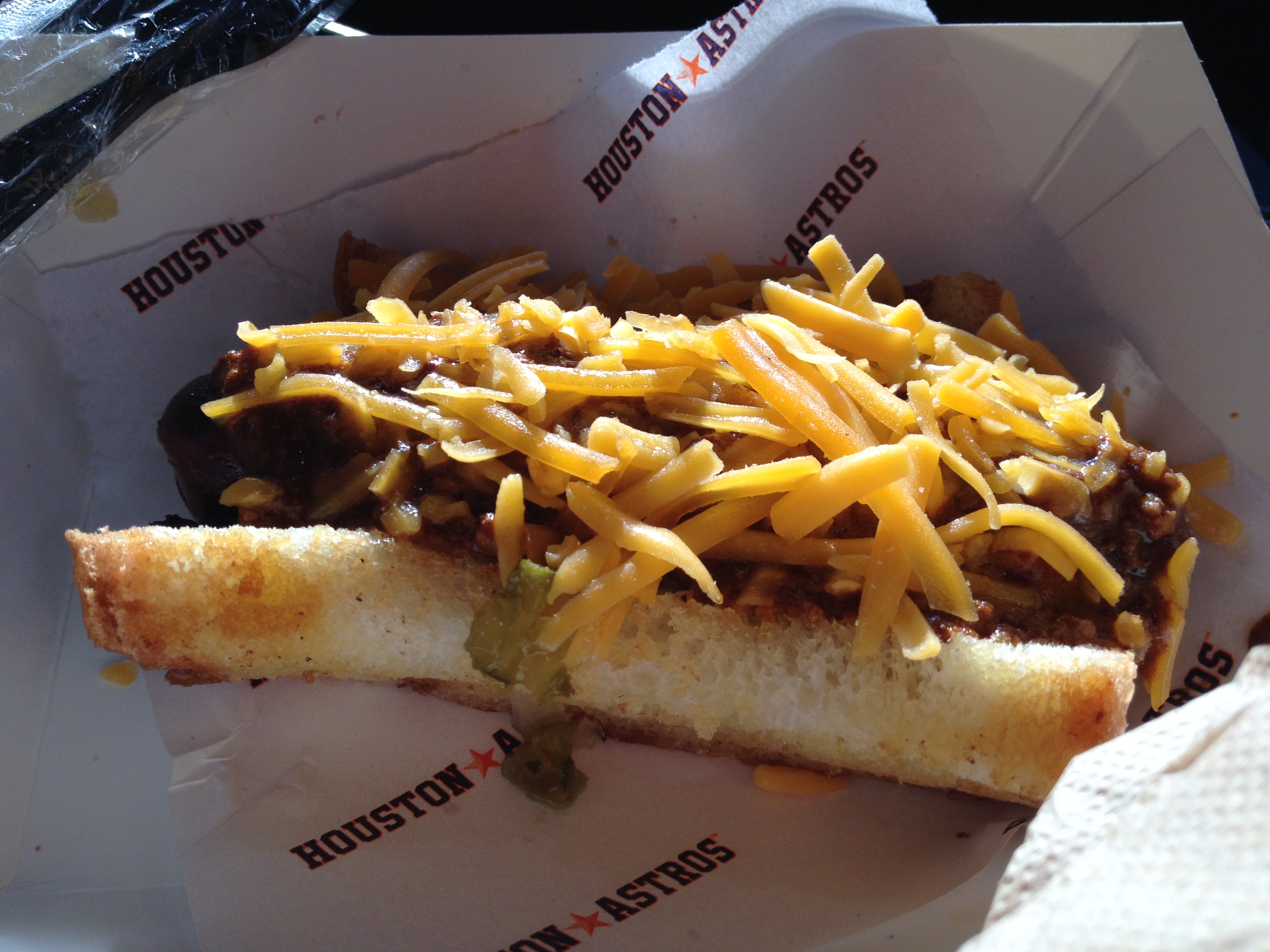 Physical Description: The standard is a thick and smoky Nolan Ryan All-Beef hot dog wrapped in bacon and placed in a Texas Toast bun with jalapeno relish. Server suggested adding chili and cheese to maximize flavor potential -- and who am I not to maximize my flavor potential?

Strength: While there are some ballpark foods that require multiple hands or a small table to consume, this one can  be consumed single-handed if you skip the employee-recommended chili and cheese. For purists who need to keep a scorecard or who need a hand for holding beer, this is a solid choice to get a taste of local flavor without requiring outside assistance. The base dog is also one of the more flavorful ones out there -- Nolan Ryan knows what he's doing.

Weakness: The addition of chili and cheese, while always a good call, overpowered the jalapeno relish. Even the bacon struggled to stand out and I pride myself on finding even the smallest scraps of bacon inside crowded nightclubs and concert venues. This one may also leave you a bit hungry around the middle of the game which could be a good or bad thing.

Recommendation: A solid member of the Astros food rotation that can eat innings. A taste of tradition with a hint of Texas heat. Many dogs around the country wish they could be as delicious as this dog. Physical Description: Follow me on this one: a thick, slightly-salty pretzel bun houses a chorizo sausage that is encased in a deep fried tortilla. That's like the Inception of ballpark food. Topped with grilled onions, pico de gallo and cotija cheese.

Strength: Imagine your standard ballpark frank or grilled sausage. Now make it better by about 100%. Spicy, salty, crunchy, sweet -- this one has it all.

Weakness: There are some issues with sandwich construction. One bite featured a dry combo of sausage, tortilla and bun followed by another bite of all toppings. With solid coaching focusing on repeating delivery, could become a consistent performer.

Recommendation: This is All-Star level ballpark food. Could front the rotation in many systems, but is happy being unheralded in deep Astros roster. A fan favorite for good reason. Fork/Knife Necessary? Yes. Unless you're a bear or something.

Food shape: Like a cartoon bomb if the bomb were made of potato and meat.

Physical Description: A baked potato covered in roughly a stick of butter, cheese, green onions, bacon and then topped with a heaping scoop of smoky, sweet BBQ brisket. It's the size of a small child's head. And it's perfect.

Strength: It's huge. It's meaty. It's salty. It's starchy. It's delicious. Any stadium would be lucky to have an item like this in their roster. Surprisingly easy to eat in your lap.

Weakness: The only weakness is the inability to take this food on the go or consume it on public transit. Almost felt like I should cover my face with a linen napkin to hide my hubris from God like it was an Ortolan.

Recommendation: Eat this. Eat this now. And then do as the stadium worker recommended to me: come back and get another one for the road.

Do you have a favorite Houston ballpark food that we missed? Let us know below.