While we've been blessed with Halloween baseball this year, as Game 4 of the World Series falls on the spookiest night of the year, there was one game played that day in 1924 that featured three Hall of Famers and a 550-foot home run. Not only was that home run surely ghost-aided in its flight, but this game still lives on in legend in the small city of Brea, Calif.

Just three weeks after Walter Johnson's Senators won the 1924 World Series against the New York Giants, Johnson faced off against Babe Ruth in the small oil town in Orange County on Oct. 31, as part of the duo's West Coast barnstorming tour. Though the evidence appears to be lost to time, there are also rumors that they even led the town's first-ever Halloween parade later that day. Hopefully they were dressed in each other's clothing. 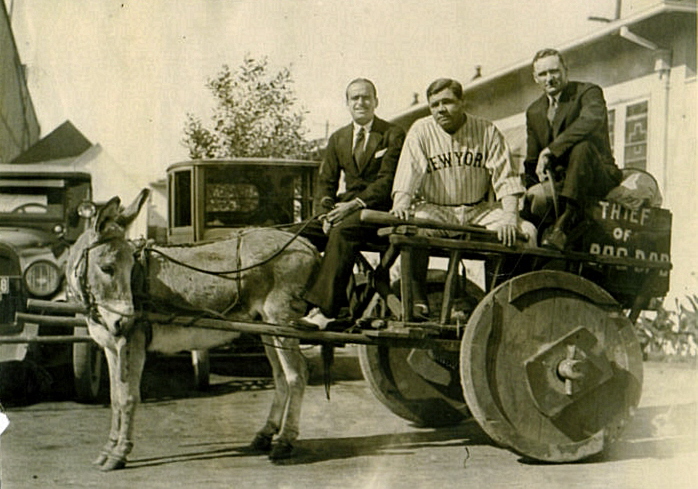 Not only was Brea's population approximately 2,000 people at the time, but the city needed to expand the Brea Bowl to accommodate the 5,000-something fans that flocked to see the Major League stars. Spectators paid $2 for a seat and $1 for a standing room only ticket (roughly $27 and $13.50 in today's dollars, respectively). Which makes sense -- with only the Pacific Coast League on the West Coast at this time, this part of the country didn't get a chance to see Hall of Fame talent like this very often.

Well, that's not exactly true. After all, part of the reason for the game being held in the town was that Johnson grew up in Olinda, just east of Brea. The Big Train played for the Fullerton high school team while also playing for the Olinda Oil Wells before heading out on his professional career.

Unfortunately for the hometown faithful, though, Ruth played the role of spoiler. With Johnson leading the nearby Anaheim Elks (whose roster was bolstered with a few of those other Major Leaguers who had come along for the day), Ruth took the mound for his All-Stars. Though he hadn't pitched in a big league game since 1921, he twirled a complete game in his team's 12-1 victory.

A complete game alone wasn't enough for Ruth, though. The slugger also swatted two massive home runs, including one that traveled an estimated 550 feet by the Anaheim Bulletin. "It was perhaps the longest hit he has ever made, according to [Ruth] himself," the article reported. Never let it be said that Ruth wasn't an excellent showman. While most were thrilled by the events, a few went home unhappy. Afterward, baseball photographer George Outland, who had traveled from nearby Whittier where he was a freshman in college (which is now home to another wonderful baseball curiosity), noted "humiliation that had befallen my hero, Walter Johnson." But perhaps that sentiment should have been tempered. Not only had Johnson secured the World Series victory with four shutout innings in Game 7 earlier in the month, but as both Henry Thomas, Johnson's biographer, and Outland's son later remarked, Johnson was likely grooving pitches to add to the celebratory environment and/or save his arm.

Given that other stops on the tour involved hanging out on Hollywood sets with Douglas Fairbanks Jr., this seems to be a logical assumption. Though the field has since been converted into a suburban subdevelopment, and the makeshift clubhouse used that day is now a discount oil and lube shop, there is still an impact on the city of Brea all these years later -- like the odd street layout just behind Brea Blvd, for example, a strange pattern cut into the city's grid leftover from when the field was razed. And many who live in the cul-de-sac know the history and claim their house stands at home plate, or second base, or some other part of the field, still wanting to take part in a barnstorming game from over 90 years ago.

Inside the Brea Museum and Heritage Center, located just down the street from where the game was held, there is one remaining "Sandlot"-like piece of evidence that this happened: A baseball filled with signatures from Babe Ruth, Walter Johnson, Sam Crawford and the rest. Later, Brea resident and BBQ master Randy Jones would get to add his name to the ball, taking his part in city lore. There may be no box score and Babe Ruth's home runs don't show up in his career record, but for one day, Brea was a big league city.

Update (9/24/18): A new piece of memorabilia from the game was just discovered. Daryl Overlock of Glendora, Calif., was recently going through his late uncle's things when he stumbled upon the game's souvenir scorecard. Unfortunately, the scorecard isn't filled out, so we still don't have a clear account of the ballgame, but it's a fascinating document from the big day. Take a look at the pictures Overlock sent below: