11 years ago, Jeter made his leap into the stands

It's not often that a regular-season game -- in any sport -- becomes a true classic, something that'll be talked about for years to come. But the showdown between the Yankees and Red Sox on July 1, 2004, managed to do just that, thanks to a rivalry at its peak, some of the game's biggest names, and a certain Captain's incredible dive into the crowd.

But the game was much more than just one iconic moment, including a triple play that wasn't (?), pitchers coming dangerously close to hitting in an American League park (?!) and Gary Sheffield throwing one to the hot dog vendor while playing third base (?!?).

So gather 'round, fire up that Terror Squad CD you definitely still have and join us for a wild and weird stroll down memory lane. 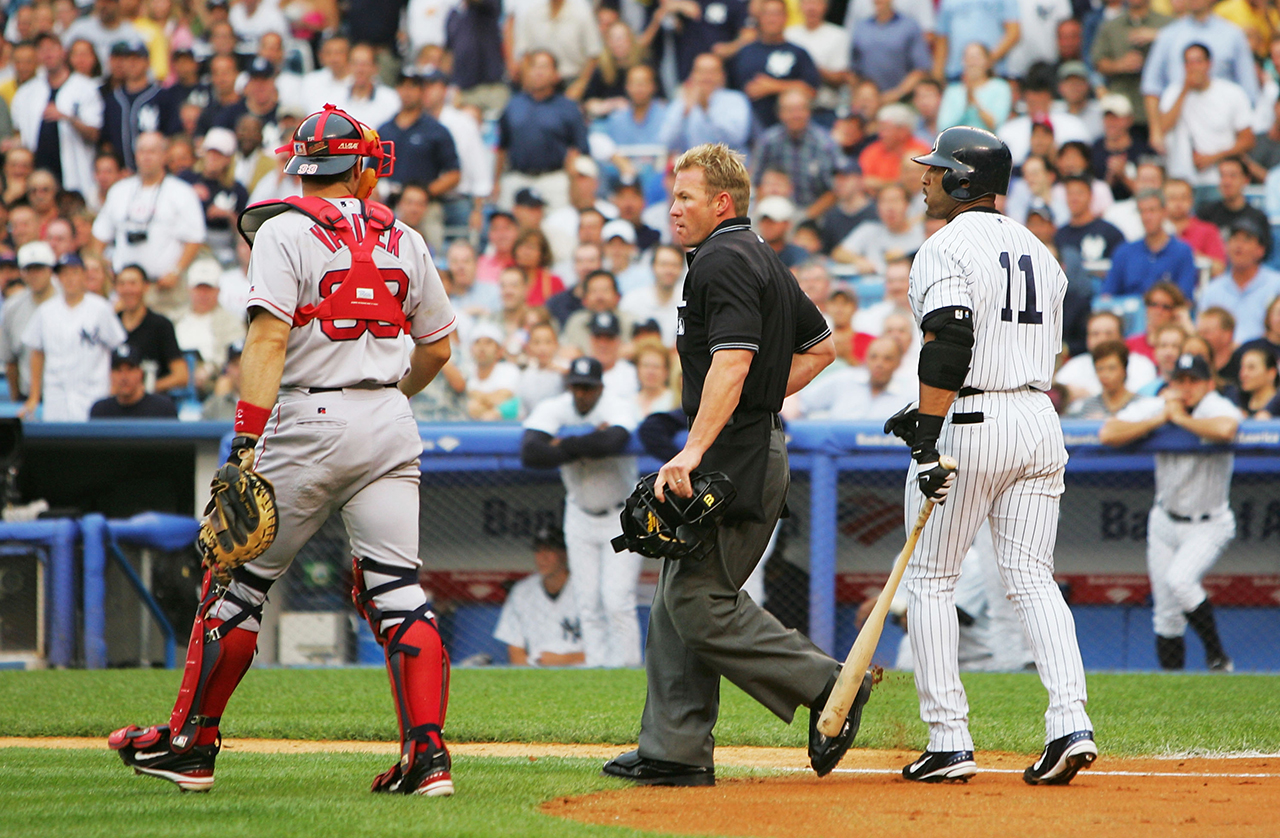 The Boston-New York rivalry had dominated the early 2000s, but in the summer of 2004, some began to wonder if the gap between the two was widening. The Yankees entered July 7 1/2 games up in the division, and the Red Sox turned to noted pinstripe nemesis Pedro Martinez to stave off a sweep and jumpstart their pennant drive.

Things didn't start out well, though. Two Yankee homers put the home team up 3-0, as little-known starter Brad Halsey stymied Boston's bats. The Red Sox would rally, though, tying things up in the seventh on Manny Ramirez's third RBI of the game. The game would head to extras, thanks to a Best of the 2000s Bullpen compilation (Alan Embree! Mike Timlin! Flash Gordon!), and from there things would get bonkers in a hurry. It's not often that "diving, game-saving double play that for a brief unhinged second everyone thought was a triple play" doesn't make it into the headline of a game, but that's where we're at. The Sox loaded the bases in the 11th with no outs, when Kevin Millar grounded one hard down the third-base line. Alex Rodriguez snared it right over the bag, tagged third for one out, then made a great throw from his knees to get Gabe Kapler at home for out No. 2. Jorge Posada then threw back to A-Rod, who tagged Ramirez running to third. The crowd lost its mind and the Yankees started running off the field ... until someone reminded them that you can't record the same out twice.

Having recovered from that awkward penguin of a moment, a flyout ended the threat, and the game continued. But just one inning later they were in almost the same spot -- reliever Tanyon Sturtze replaced Mariano Rivera for the 12th, and promptly gave up a walk and a hit sandwiched between a sac bunt. After Mark Bellhorn popped out for the second out, Trot Nixon came to the plate with two runners in scoring position. And then Derek Jeter happened:

The cherry on top: While being led back to the dugout by the trainers, Jeter briefly paused on the top step and flipped the souvenir to a kid in the first row, which is just showing off, really.

Remarkably, though, Boston wasn't done. Jeter's injury put the Yankees in scramble mode in the top of the 13th, shifting Sheffield to third for the first time in 20 years. Ramirez would render all that moot with his second home run (and fourth hit) of the game, and after Red Sox reliever Curt Leskanic retired the first two Yankee hitters in order, the game seemed over. But Ruben Sierra came up with a seeing-eye single to keep things alive, and uber-utility man Miguel Cairo drove him in with a game-tying double. The stage was set for backup catcher (and .167 hitter) John Flaherty to be a hero:

Jeter would be in the lineup the next day, because of course he was.

Fear not though, New England. You'd get yours just a few months later: