Here's the Giants' 2-1 win in less than six hours

As far as must-win games that aren't really must-win games go, this one was up there for the Nationals. A win in Game 2 of the National League Division Series on Saturday would allow them to pull even in the best-of-five with the Giants. A loss would send them to San Francisco down 0-2.

And so they turned to Jordan Zimmermann, fresh off his no-hitter in the regular-season finale on Sunday, at Nationals Park. He went up against Tim Hudson, who has regularly dominated the Nationals since they moved to Washington, mostly when he suited up for the Braves through 2013.

5:37 p.m. ET - Zimmermann threw his first pitch to Gregor Blanco. Shortly after, as if to say, "Hey, no need to worry, I'm not going for a no-no this time," Zimmermann allowed Buster Posey a single with two outs in the first. At the time, it looked like it might be a sign that Zimmermann was human. Most of the rest of the game indicated otherwise.

6:02 p.m. ET - Hunter Pence led off the second with a single, but Zimmermann and catcher Wilson Ramos teamed up for a strike-'em-out-throw-'em-out double play. Brandon Belt swung and missed at a 93-mph fastball up in the zone, and Ramos cut down Pence trying to steal second.

6:29 p.m ET - Asdrubal Cabrera led off the home half of the third with a double. Three batters later, Anthony Rendon singled him in. Little did anyone know the Nats wouldn't score for the next 15 innings.

Asdrubal Cabrera hit .200 with one extra-base hit in 12 playoff games for the Indians. Has homered and doubled already for the #Nats.

8:19 p.m. ET - In a postseason highlighted so far by aces getting lit up, Zimmermann absolutely did not. He shut the Giants out for 8 2/3 innings until manager Matt Williams pulled the plug after a walk to Joe Panik in the ninth.

#Nationals Jordan Zimmermann is the first pitcher ever to leave a postseason game with a shutout intact through exactly 8⅔ innings pitched.

8:24 p.m ET - Drew Storen promptly allowed a Posey single before Pablo Sandoval doubled to left to tie the game at one. The Giants nearly took the lead, but a pair of tidy relay throws nailed Posey at the plate. It was the last run anyone would see for another three hours and ten minutes:

Then the bullpens took over. As the game headed to the 18th, both teams' relief corps combined to allow four hits in 16 extra innings over the course of nearly three hours. San Francisco's Yusmeiro Petit alone accounted for six innings of one-hit ball.

The #Nationals and #SFGiants have played the longest game in playoff history. #Nats #MLB

11:34 p.m. ET - Brandon Belt must've wanted to go home, though, and he decided to give the Giants the lead in the top of the 18th with a solo shot to the upper deck in right field.

Of course, that meant everyone made the same pun on Twitter.

12:01 a.m. ET - Hunter Strickland got Jayson Werth to line out to Hunter Pence, closing the door on the longest game in postseason history in terms of time:

In case you weren't keeping up with the math, the contest clocked in at six hours and 23 minutes. Just think -- that's almost the entirety of True Detective. Until this game broke the record, the longest postseason match was Game 4 of the 2005 Astros-Braves NLDS. Houston won 7-6 after five hours and 50 minutes.

Belt's heroics might have never happened if not for a sparkling relief effort from Petit that could only be described as "gutsy." For six innings -- 12 through 17 -- the right-hander stifled Washington, allowing one hit and fanning seven.

Of his 12 starts this season, only two were longer than six innings.

One would be remiss to mention Zimmermann's gem or Petit's effort without a tip of the cap to Hudson. He allowed one run and struck out eight in 7 1/3 innings.

Hudson's night would have been even better if not for Rendon. The Nats third baseman singled four times, accounting for more than half of the team's hits through nine innings (plus the only RBI).

Anthony Rendon becomes the 1st player in #Nats (or Expos) history to record four hits in a playoff game.

Ian Desmond's play in the eighth was a case in which the Gameday play-by-play -- "Brandon Belt pops out to shortstop Ian Desmond" -- doesn't nearly do it justice. Desmond ranged in short left-center and made an over-the-shoulder catch to keep the bases clean for Zimmermann.

Asdrubal Cabrera was ahead in the count, 3-1, against Jeremy Affeldt in the 10th when home-plate umpire Vic Carapazza called back-to-back borderline strikes. He let his disagreement be known but Carapazza didn't appreciate the sentiment and ejected the second baseman, then booted Williams.

On the seventh day, they rest. Sort of. The Nationals and Giants get a day off Sunday to travel to San Francisco, where the series will resume at a time to be decided at AT&T Park on Monday on MLB Network.

The Nats will give the ball to Doug Fister, who had arguably the best regular season of all of their starters, with one more loss meaning the end of their season. Fister will go against Madison Bumgarner, who threw a shutout Wednesday against the Pirates in the NL Wild Card Game. 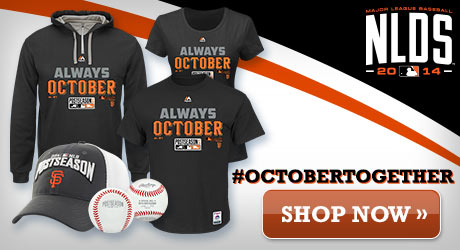