Farewell, Captain: With a walk-off win, Derek Jeter says goodbye to the Bronx

Yankee Stadium has been Derek Jeter's home for twenty seasons, and on Thursday night, he was scheduled to play his final home game against the Orioles. But there was some worry it might not happen at all. It rained almost all of Thursday in New York, until about fifteen minutes before the first pitch:

Rainbow over Yankee Stadium. Can't make this stuff up. pic.twitter.com/18kI6vOXdM

Sun shining, Jeter ran out into the infield and was greeted by a roar loud enough to drown out the sounds of the subway overhead. Loud enough, probably, to drown out the noise from the rest of New York City itself:

Fans also found visual ways to let The Captain know how much they cared: 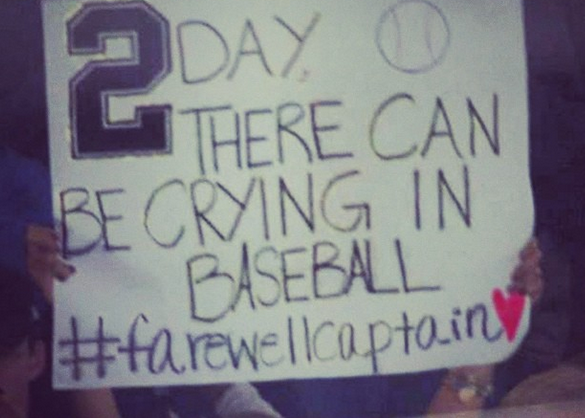 But it wasn't just the fans. Even the earth itself rose up to pay tribute to him. Okay, maybe not the whole earth. Maybe just a few pieces of it in the infield at Yankee Stadium, specifically the bases themselves, which were emblazoned with some of Jeter's career feats:

In his first at-bat, he hit his 544th career double, putting him past Tony Gwynn and at number 30 on the all-time list:

And in the seventh inning, in what could have been his last plate appearance, he knocked in the go-ahead run with a broken-bat fielder's choice, with help from an error by J.J. Hardy.Then, he tipped his cap to the crowd one last time …

No, of course that's not what happened. You think he's about to leave you like that? Steve Pearce tied up the score again in the ninth, giving Jeets one more at-bat, during which he hit a walk-off single, because of course he did. He's Derek Jeter:

Of course, a certain Twitter jinx culprit/Mets beat reporter wanted to take credit for it:

All right, I'm doing this to be nice to all the Yankee fans out there: Derek Jeter will not hit a walk-off in the ninth. #DiComoJinx

But whether it was social media mojo or not, it proved that even in a career as long as his, there is still room for the unexpected. Yes everyone, on Thursday night, Derek Jeter submitted to his first Gatorade shower:

But of course there was more celebration: With teammates from now:

Well-wishers from around the Leagues:

Shocker! #thecaptain does it like he always does!! That's what I envisioned 3000 to be like! Not 37 rows deep to left center!! #welldonejeet

Not a better place to do it and not a better person for it to happen to...Hats off to you #Captain! #RE2PECT

Couldn't have been scripted better. glad I got to compete against such a classy icon. Plus, I may have given up his last homer ever.#RE2PECT

Incredible!!! Did anyone expect anything less. #storybook #RE2PECT #FairWellCaptain

Couldn't have asked for a better role model within the game. Jeter thanks for teaching me that grinding is the way to play

Jeter always played the game in the most respectful way. Honored to have been able to watch, play and learn from one of the greatest!!

And briefly, by himself, when he bowed down to the place in the infield he'd stood for so many years:

Visibly holding in his emotions, Jeter gave his last post-game interview, thanking the fans for all of their dedication and support:

Then he saluted the crowd once more:

And walked into the clubhouse for the very last time:

Farewell, Captain. You will be missed.