Here's how your favorite team will win the 2015 World Series

How your favorite team will win the 2015 World Series

Right now, with Opening Day just a few planetary rotations away, MLB fan optimism is at an all-time high: Every team is undefeated, and every team has a chance of winning the World Series.

But how? What's each club's most likely path to victory in the Fall Classic? We plugged some variables into our high-level formulas and, using the rigorous analytics provided to us by our crack team of researchers, produced what we think is the most scientifically and mathematically accurate outcome for each team's journey to glory in the Fall Classic.

So, when your team wins the 2015 World Series, here's how we think they're gonna do it:

Angels: Mike Trout and the Halos begin the season on something of a cold streak, just scratching out a spot in the AL Wild Card game. However, after attending a quick tune-up lesson with Danny Glover, Tony Danza and Christopher Lloyd, Trout catches fire in the postseason, winning the World Series MVP in the process.

Astros: In an effort to better prank opponents, Orbit learns how to throw a baseball like Astros executive adviser Nolan Ryan. He becomes so good at it that he wins the Cy Young Award and leads Houston back to the Fall Classic. 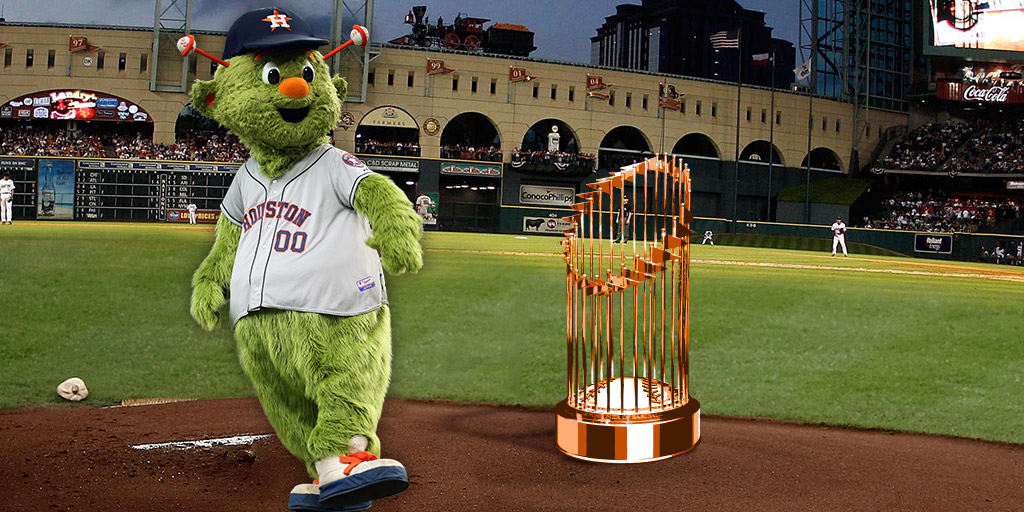 Athletics: While pitching ideas for the sequel to Moneyball, the A's decide the only way to top the first movie is to win the World Series. This time, Brad Pitt is hired to actually play on the team and it turns out that he's either really good or just startlingly handsome in a baseball uniform. (They're kind of the same thing.) After winning the Series, "Moneyball 2: 2 Money 2 Ball," wins Best Picture at the Academy Awards.

Blue Jays: Munenori Kawasaki earns a permanent role with the big league club, and his enthusiasm and love for the game inspires a sports movie-like wave of good karma. The Jays are propelled into the postseason and the Fall Classic, for the first time since 1993. With two on and two out in the deciding game, the sheer radiance of Kawasaki's smile laces a Series-winning double.

Braves: Andrelton Simmons' range begins growing uncontrollably, engulfing baseballs from MLB games in other cities. The entire season must be played out in Atlanta and home field advantage powers the Braves to a World Series title.

Brewers: Jonathan Lucroy not only frames every pitch for a strike, but it's revealed that he's also a framer of the constitution. In very tiny letters at the bottom, that no one has ever seen before it says, "The Brewers should win every World Series." Don't know how Nic Cage missed that one.

Cardinals: The calluses on Matt Carpenter's batting glove-less hands gain sentience, taking over as the team's super-utility player. In the bottom of the ninth of Game 7 of the World Series, The Callus steps to the plate and drops down a squeeze bunt to win the series.

Cubs: When the Cubs obliterate the record for most home runs in a season, with Kris Bryant, Jorge Soler and Javier Baez combining for 300 long balls, a World Series will be gifted to them as all opposing pitchers are like, "Yeah, nope, not gonna face that lineup."

Dodgers: Inspired by Will Ferrell, Yasiel Puig plays every position in every game, earning Gold Glove Awards for all of them. Reigning NL MVP Clayton Kershaw doesn't allow a single hitter to reach base all season. At the Series, the rest of the team takes the week off to sit back, relax and drink champagne while Puig and Kershaw do most of the heavy lifting. Giants: Madison Bumgarner developed an insatiable hardware thirst over the offseason and goes on to win all the awards in 2015. Buster Posey, Joe Panik and a returned Hunter Pence team up to scientifically prove the Even Year Rule is more of a guideline, really. The trio give their TED Talk during a Series-clinching Game 6 by combining for 12 hits and 10 RBI.

Indians: Corey Kluber, aka "The Klubot," is merely the first step of the robot revolution. He is quickly joined by fellow robots in the Indians rotation and lineup. Since robots can't feel emotions like World Series nerves, the All-Mech club calmly leads Cleveland to its first championship since 1948.

Mariners: It turns out that King Felix is actually a king and he rules that it's illegal for other teams to score runs. With help from Brad Miller's stirrups and Dustin Ackley's beard, the team goes 162-0. Because you can't lose if the other team doesn't score.

Marlins: In August, Giancarlo Stanton hits a literal moonshot that alters the lunar cycle, driving the other 29 teams crazy. With the rest of the league confused and disoriented, the Marlins take home their third Commissioner's Trophy in franchise history. Mets: Bartolo Colon finally matures at the plate and has the breakout offensive season that scouts have long predicted. He leads the league in batting average, RBIs and home runs, winning the Triple Crown, MVP and Cy Young awards. Colon bats behind David Wright, and the two combine for 10 home runs and 40 RBI in a World Series sweep.

Nationals: Sabermetricians discover that there IS a strong positive correlation between facial hair and WAR. Bryce Harper, Jayson Werth and Danny Espinosa finish Nos. 1, 2 and 3 in NL MVP voting and the Nats sweep the beardless Yankees in the Fall Classic.

Orioles: The Orioles' bats lead Baltimore back to the postseason, where prospect and former Notre Dame basketball player Pat Connaughton takes over and sets the league ablaze. Because they don't have to face Kentucky, they coast to the World Series win. Somehow, he also pulls down seven rebounds a game. (Yeah, we don't know either.)

Padres: Matt Kemp, Justin Upton, Wil Myers, James Shields -- all of the new faces in San Diego join forces to create a new kind of Justice League-esque super-team, winning 100 games AND defending the world from alien invaders. This comes in handy when it turns out their Series opponents were actually alien clones. The Pads beat them fair and square before turning them into the proper intergalactic authority. Phillies: The Phanatic's hilarious antics become so distracting, Chase Utley is able to fool every runner that reaches second base with the hidden-ball trick. Wearing x-ray specs, the Detroit Tigers remain un-fooled until the bottom of the ninth of Game 7 when a player's glasses fall off while sliding. He's tagged to end the series.

Pirates: Corey Hart and A.J. Burnett, arguably the biggest Batman fans in all of baseball, are given special baseball equipment by a benevolent billionaire named Bruce Wayne. After easily winning the division and reaching the Series, trouble strikes when it's revealed that a madman is on the loose during Game 3. Fortunately, thanks to their training, the Pirates subdue the criminal and return him to prison. A grateful nation happily awards the team the trophy.

Rangers: It's revealed that Adrian Beltre doesn't like his head being touched because there is an ancient god living just beneath the scalp. And this ancient god, now released, is also great at pitching. With Prince Fielder's power bat returning to the lineup, the team out bashes the other clubs to the title, while also starting a new religion devoted to bald men. (Hey, a man with early onset male pattern baldness can dream, right?)

Rays: Not only does the Rays' underrated pitching staff deal lights-out stuff throughout the year, but Rays mascot DJ Kitty performs before every game with the lights off. The resulting rave-like atmosphere disorients opponents, and the Rays go undefeated at home. The Series goes a full seven games before DJ Kitty makes a surprise 7th-inning stretch performance and the other team gives up to go dancing.

Red Sox: The Three Amigos of David Ortiz, Hanley Ramirez and Pablo Sandoval are so feared by their opponents that they are intentionally walked in every single plate appearance. Because they bat right after one another in the order, the Red Sox win every World Series game on a grand slam. Also, rentals of the classic comedy, The Three Amigos, go through the roof.

Reds: Aroldis Chapman strikes out 100% of batters, Joey Votto gets on base 100% of the time and Brandon Phillips photobombs the opposition into giving up. With an 0-2 count in the bottom of the 9th of Game 4, Phillips' photobomb is so effective, the batter swings with a pitch having not even been thrown for the last out.

Rockies: Treading water at midseason, the Rockies call up 88-year-old Lew Dunlap from Fantasy Camp to Coors Field. Dunlap's pinch-hitting and mound-charging ways give the team the boost they need. With pitchers afraid to incur Dunlap's wrath, they sweep their way to a World Series.

Royals: Every '90s film has taught us that nothing is stronger than friendship. No friendship is stronger than Salvador Perez and Lorenzo Cain's. At the World Series, the opposition tries to split them up, hoping that the rancor between the two will destroy the team. But since their bond is stronger than gravity and the rest of MLB, the team easily wins - especially as their opponents spent no time on actually preparing to play.

Tigers: Justin Verlander, Jose Iglesias and Yoenis Cespedes drive cars that were made by a Detroit wizard specifically for a Motor City victory parade. Not willing to upset the powerful wizard, the league has no choice but to let the Tigers and their incredible bats enjoy their postseason glory.

Twins: Phil Hughes, possessor of an extraordinary K:BB ratio, uses his newly-discovered Jedi mind tricks to confuse batters. Since none of the opposing rosters contain anyone with the last name "Skywalker," the Twins easily make their way to, and through, the Fall Classic.

White Sox: What's the most terrifying animal in the natural world? A shark. And what's the most terrifying weather event? A sharknado. Unfortunately for opposing teams, Jeff Samardzija scraps his fastball in place of hurling tornados filled with sharks. With teams powerless to hit the ball/shark and Jose Abreu now swinging a live-shark as a bat, the team literally devours the competition on their way to a World Series victory.

Yankees: It's tough to fill Derek Jeter's shoes, but new shortstop Sir Didi Gregorius does so admirably. So well, in fact, that he earns the nickname "Sir October" for his postseason heroics - including the diving catch into the stands for an out and that saved a poor baby dropped from the upper decks -- leading the Yankees to their first Jeter-less World Series since 1978.