I ate 18 tacos at the Fresno Grizzlies' Taco Truck Throwdown. You will probably believe what happened next

I ate 18 tacos at the Grizzlies' Taco Truck Throwdown

Located in California's Central Valley, where the summer heat regularly tops 100 degrees, the Fresno Grizzlies entice fans to come out to the ballpark with some truly inspired promotions. Earlier this year, the Grizzlies made news with their fashion forward Teenage Mutant Ninja Turtles uniforms. On Thursday night though, they may have topped even that nostalgia trip with their fourth annual Taco Truck Throwdown. And I was lucky enough to be in attendance.

Thanks to my love of tacos and stuffing my gaping maw, co-founder of the event and Big League Stew writer Mike Oz invited me up to help judge the proceedings. Sure, it would be a four-hour drive from Cut4's Los Angeles headquarters in the August heat, but when someone is asking you to be a literal tastemaker, you don't say no.

So I packed my car, loaded up on antacids and bottles of off-brand pink bismuth subsalicylate and told myself that no matter how many roadside BBQs with cartoon pig logos I passed, I wouldn't stop. Because I made a promise to myself, to Mike, to the Fresno Grizzlies, and to Cut4 to eat 18 tacos from 18 different vendors. Those who can't do, teach. Those who can't teach, eat. Or something like that. You may not realize this, but the Central Valley can actually lay claim to the first ever taco truck. According to Sam Hansen (the other co-founder of the event and the Marketing Creative Manager for the Grizzlies), Mexican migrant workers would come to Fresno during World War II to pick grapes then "they'd go up to Stockton and pick sugar beets, they'd go to Washington and pick apples. And Mexican men traditionally don't cook. So in order to get food to these guys, the restaurants here created these lunchero trucks."

And that's what this event really is. It's not just about stuffing your face, it's about honoring the local culture and cuisine. After Oz had become known as a "local taco connoisseur," having eaten at 30 taco trucks in two days while writing for the Fresno Bee, Hansen and Oz got together to start the event. What began with seven trucks in its first year has now blossomed into 18 for 2014. Yes, my task was the most difficult yet.

When we began at a little after 5 p.m. PDT, Oz laid down the ground rules. We would be scoring the tacos on a 1-10 scale and we should either stick to one type of meat or accept whatever each truck thought they did best. I decided to leave it up to the truck's discretion. After all, they know what they're doing.

Here is my official scoresheet. On paper, my task doesn't seem all that difficult. We went outside to a row of trucks located near the stadium, roughly half split outside the entrance and down the third-base-line. Few fans had arrived yet. In hopes of keeping the judges together (which included local radio and TV personalities, taco app creators, and contest winners) and knowing that our mental faculties would be impaired later, Oz collected the tacos from each truck and brought them to us. Like a mother bird returning to her brood. I just hoped he wouldn't need to premasticate the food for me toward the end.

We received our first taco. It was a delicious carne asada. The meat was smoky, the toppings crisp and cool, the salsa giving a nice bit of spice. Judging by the roughly 13 carne asada tacos I consumed, this was the dish that most trucks specialized in. I ate the whole thing in three bites. This was going to be a breeze. If anything, eating this many tacos was a dream come true.

Next up was Ortega's, a Reedley institution, roughly 30 miles away from Fresno. Again it was carne asada, though their spicings were different and they offered flavorful and large slices of grilled onion. Though we didn't know it at the time, Ortega's would lead the way in total sales, slinging 2,398 tacos before the evening was finished. 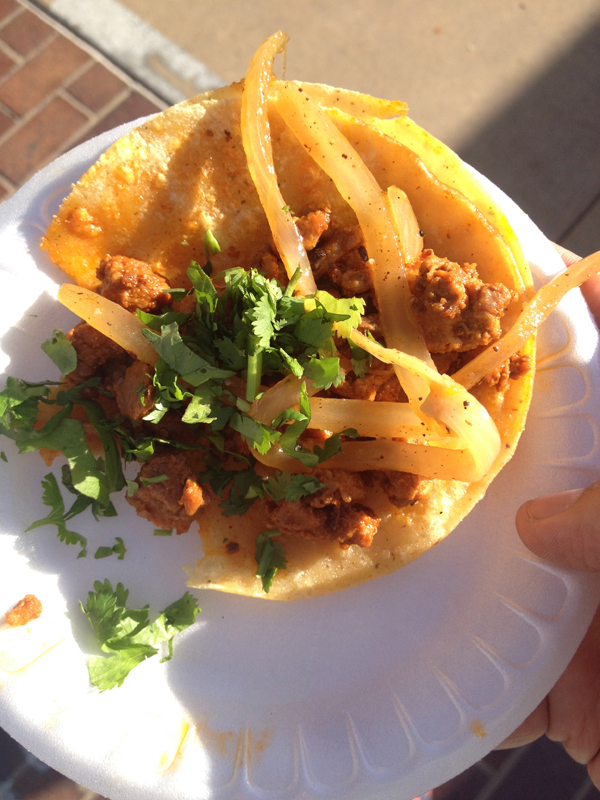 Three more bites and -- what's that? The other judges weren't finishing theirs? Sure, I had been warned to pace myself and go slow, but I thought that was just like the safety warning before a flight: A legal requirement that no one actually listens to.

We continued on. I don't know if it was the sun or the salt content, but the tacos all started to blend together. At first it was pleasurable, the gummy mixture of beef or pork all melding into one super taco. The ones that stood out were the ones that approached the food from a slightly different angle. Like the sweet and tangy curried beef from Gastro Grill. Or the gummy fried seafood that was maybe chopped shrimp, maybe something else, from Las Adas Manzanilla. At the conclusion of the 11th truck, my brain solely focused on the finish line. I was like a marathon runner. We rounded the corner and entered the concourse.

It was surreal. A row of taco trucks against a backdrop of bright green grass and the sounds of the lineup being announced over the loudspeaker. A taco was handed to me -- I couldn't see who it was (God? My mother? I don't know.) I took and chewed, swallowed, repeated. I was a mechanical man at this point.

Despite the salt content in my body giving my mouth a cottony feel and possible visual hallucinations, the spice of the salsa still managed to cut through and reach the flavor receptors on my tongue. This one was good. This one was very good.

It turned out it was La Elegante, a one-time winner. Their blue truck blending with the sky. Was this a taco truck or some sort of food-serving cloud? There was no time for questions like that. We had to fight on. I was taco drunk now. My stomach, mouth and feet were stuffed with tortilla, grilled meats, and cabbage. Had I tried to drive, I'm pretty sure someone would have taken my keys.

With three trucks left and the concourse beginning to fill as game time neared, I made a crucial mistake. Having slowed my pace from full tacos to merely two-thirds of each, we came across The Benaddiction truck. This was a paradigm shifter, one that split opinion on whether its offerings could even be considered a taco. Instead of a tortilla, the bed was a maple syrup and butter-soaked pancake. Instead of grilled meats, we had scrambled eggs and sausage.  I couldn't help myself. My addiction to breakfast led me to eat the whole thing.

Two minutes later, like there was a demon hidden within the batter, the pancake swelled within me. You know that scene in A Grinch Stole Christmas where his heart explodes outside of that little box? Well, that was the pancake in my stomach. But I was only two away from the finish. I couldn't stop now. Sure, my fellow judges had morphed into horrible, taunting taco cariactures like I was a cartoon character marooned on a deserted island. I was handed my next taco, chunks of stewed meat sitting atop the corn tortilla like grayish blobs from a lava lamp. I put it in my mouth and forced myself to open and close my jaw. Somehow, it was still delicious. How could this be? How could I taste anything when I was clearly already dead?

From there everything is a blur. The last taco came, I ate it. I remember tasting something, though I'm not sure if it was a memory of a taste I once had. Our group of judges took a picture, perhaps so we could be identified at the county morgue later that night. We handed in our ballots.

Though I was sleepy and thirsty and rudimentary arithmetic was beyond me, I knew I could accomplish anything. I had put myself through the ringer and come out the other side. Stuffed and salted, but successful.

I stumbled around for the rest of the game. The concourses were packed and taco lines looped between trucks like strands of DNA. The final attendance count for the day was 13,845, the fourth-largest crowd in Grizzlies' history. An absurd 27,000 tacos were sold. Witnessing it, I wasn't surprised. Five innings later, as my stomach went from revoltingly, disgustingly full to merely bloated and stuffed, I learned of the Grizzlies' house special: their Grizzlies Eggs. It's a dish consisting of four boiled eggs, each wrapped separately in bacon, then covered in buffalo sauce.

Despite my heart and my stomach saying no, I could hear my editor saying "Yes." So I ambled up to the counter.

"Hello. I may be making a mistake, but I must have the Grizzlies Eggs."

The woman looked at me strangely.

"The Grizzlies Egg." I repeated. Was this a dream? Had I passed out into a taco coma? "You have it on the board there."

The woman looked back and saw it. "You know, I've never sold one." She brought over a few other workers to make sure they could make the creation.

"It will take about ten minutes," one of the men said to me.

"That's fine. Time is meaningless to me now."

When I received it, I was once again disgusted with myself. Not because the food itself was foul, but because despite how much I had already consumed, my body was still reacting positively to food. Shouldn't this day have made me give up everything except for the occassional sprout or blade of wheatgrass? I took a bite. It was delicious. Of course it was. The people of Fresno have been making a terrible mistake in not ordering this object.

I returned to a seat, and lay back like a beached whale just in time to hear the results of the Taco Truck Throwdown. In a true stunning finale, not only had La Elegante won, becoming the first ever two-time winner of the event, but they also collected the fan's choice award. It was a clean sweep.

Maybe they really were serving tacos from a cloud. By that point, I really didn't know.