A visual timeline of Ramirez's journey back to Boston

Time is a flat circle. Almost exactly nine years after the Red Sox traded Hanley Ramirez to the Marlins, Ramirez is coming back to Boston.

How did we get here? What does it all mean? Is the secret fate of all life really "everyone comes back to Boston in the end?"

Well, we can answer one of those questions (the first), and we can do it in style.

Shortstop prospect Hanley Ramirez joins the Red Sox for Spring Training. He makes his MLB debut on September 20 in a 15-2 win over the Rays. 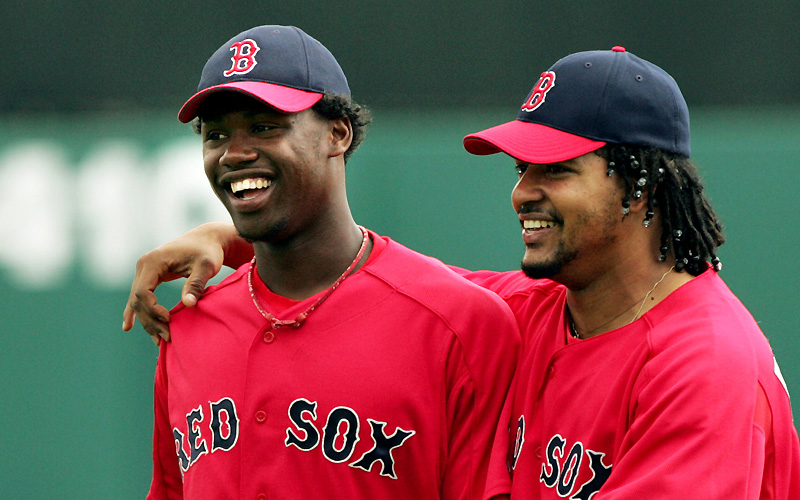 Spending most of his time in the Minors, Ramirez has all of two at-bats in 2005 for the Red Sox to go with this one fielding chance:

Hanley Ramirez wins National League Rookie of the Year Award after batting .292 with 17 home runs and 51 stolen bases in his first full year with the Marlins. Florida finishes 78-84 on the season, Boston finishes 86-76. Nearly two years after the Ramirez trade, the Red Sox sweep the Rockies to win their second World Series in four years.

Mike Lowell earns World Series MVP honors. He turns in an All-Star regular season as well, batting .324 on the year with 21 home runs and 120 RBIs, and finishing fifth in AL MVP voting.

Josh Beckett wins 20 games in 2007 with a 3.27 ERA, is selected as an All-Star, finishes second in the AL Cy Young Voting and is named ALCS MVP against the Indians.

Hanley Ramirez is selected to start his first of three consecutive All-Star Games and leads the National League in runs with 125 on the season. After finishing 95-67 on the year, the Red Sox are eliminated from the postseason in Game 7 of the ALCS against the Rays. The Angels sweep the Red Sox out of the postseason in the ALDS.

Five years after he was traded to the Red Sox, Mike Lowell retires from MLB. He played in 73 games for Boston in 2010.

Seven years later, Hanley Ramirez is traded a second time. Along with Randy Choate, Ramirez is sent to the Dodgers for pitchers Nathan Eovaldi and Scott McGough. Ramirez hits .271 with 10 home runs in 64 games for Los Angeles.

Ramirez and Beckett, teammates on the Dodgers, are eliminated from the postseason in Game 6 of the NLCS by the Cardinals. Ramirez bats .345 with 10 home runs for the Dodgers and finishes eighth in NL MVP voting.

The Red Sox go from worst to first in 2013, finishing the regular season 97-65 and winning the World Series over the Cardinals in six games.

In his 14th MLB season, Josh Beckett throws his first no-hitter against the Phillies.

The Dodgers are knocked out of the postseason by the Cardinals once again, this time in Game 4 of the NLDS. Ramirez hits .283 with 13 home runs for the Dodgers.

Time is proven immutable: Hanley Ramirez signs a contract with the Red Sox nine years after he was traded to the Marlins.