Which team will MLB superfan Manny Pacquiao fight for in his May 2 title bout?

Which MLB team will Manny Pacquiao fight for?

On Friday, boxers Manny Pacquiao and Floyd Mayweather officially announced their intent to fight on May 2 in Las Vegas. The fight is being billed as a "superfight," with two of the sport's most famous and decorated pugilists finally meeting in the ring.

But, there's a larger question in play here. Not only is Pacquiao representing his home nation of the Phillipines in the ring, a nation for which he serves as a congressman, but he'll also be repping for an MLB team.

However, we aren't quite sure which one.

You see, in August of this year, Pacman was on hand in San Francisco to toss out the ceremonial first pitch for the eventual World Series champs -- something they pointed out on Twitter just after the superfight's announcement:

But, it turns out, a few days after Pacquiao threw out that pitch, he took a trip to Chavez Ravine to also toss out a ceremonial offering for the Giants' rivals, the Dodgers:

.@SFGiants well this is awkward. pic.twitter.com/PVPYOwu4zr

Sure, he looks pretty fly in that Dodgers jersey: But, the Giants are the reigning World Series champions, and Pacquiao could use some of that championship magic when he steps into the ring with Mayweather in May: So, which is it? Which MLB team can claim Pacman as its own? It's got to be one of those two, right? So, clearly Pacquiao loves all of the Californian baseball teams, but his baseball love hasn't yet ventured over to the East Coast, right? 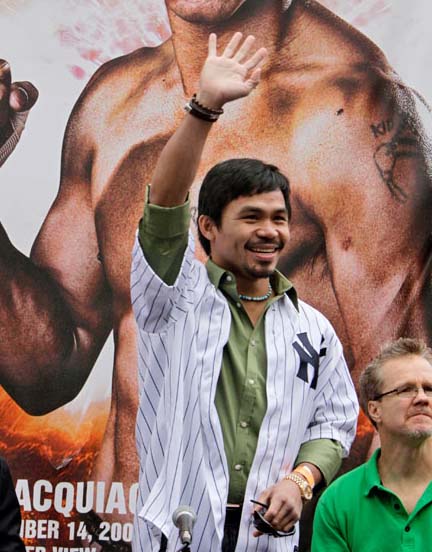 OK, but that's gotta be it. It's not like he's spent a bunch of time hanging out with Marlins superstar Giancarlo Stanton, too:

Me & PAC are ready to judge #MissUniverse tonight ! Be sure to tune in on @nbctv 8/7c

Alright, that settles it: a Pacquiao win is a win for the entirety of MLB. No pressure, though, Manny.