Wednesday night, the Boston Red Sox won their third World Series championship in the past 10 years, clinching victory in front of the fans at Fenway Park for the first time since 1918. If you want to see the key moments from the game, click here.

After the final out, however, Boston threw a party for the ages. Check it out:

In case you're wondering, this is the exact moment Boston lost its dang mind: Outside Fenway, the Boston Police were ready to make sure the city could celebrate safely: David Ortiz also made sure he could celebrate safely:

And then it was time to rush the field: Boston's unhittable closer Koji Uehara reached up toward the sky: And Red Sox cult-hero Jonny Gomes did the jet and flew into the huddle: And Gomes did a victory lap with it:

Then it was time for the ceremonies, and skipper John Farrell held the Commissioner's Trophy aloft -- capping off an eventful first year as Red Sox manager:

And Gomes was still running: Even Secretary of State John Kerry was psyched: All around the city, Red Sox fans gathered to party: It didn't matter where you were, you couldn't escape the dancing, singing and cheering: The easiest way to get around was surfing: But at the epicentre of it all, were the guys who got it done in front of their own fans: 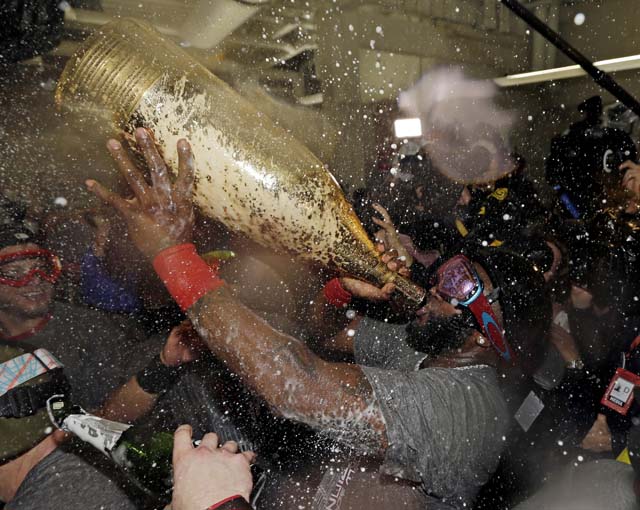