7 of the weirdest ballpark quirks in baseball history

One of the great joys of baseball is just how much the game embraces being weird as heck. The basic outline may be set in stone -- 90 feet to first, 60-feet 6-inches to home -- but in between lies all sorts of room for interpretation and flavor. Want acres of foul territory? Go for it. A giant green wall? Sure! While other sports regulate just about every aspect of the playing field, baseball is busy sticking hills in the middle of things just for fun.

But with all due respect to today's funky ballpark quirks, certain fields of yore were even more, uh, eccentric. And so, in perpetual appreciation of the wackiness of our national pastime, we present: Seven ballpark features so bizarre we definitely couldn't have made them up.

1. The University of Texas used to play with an actual cliff in center field

This is how a 1974 "Texas Monthly" article described UT-Austin's Clark Field:

Yes, seriously -- from 1928 to 1975, the Longhorns played their baseball games on a field with a cliff in the middle of it: 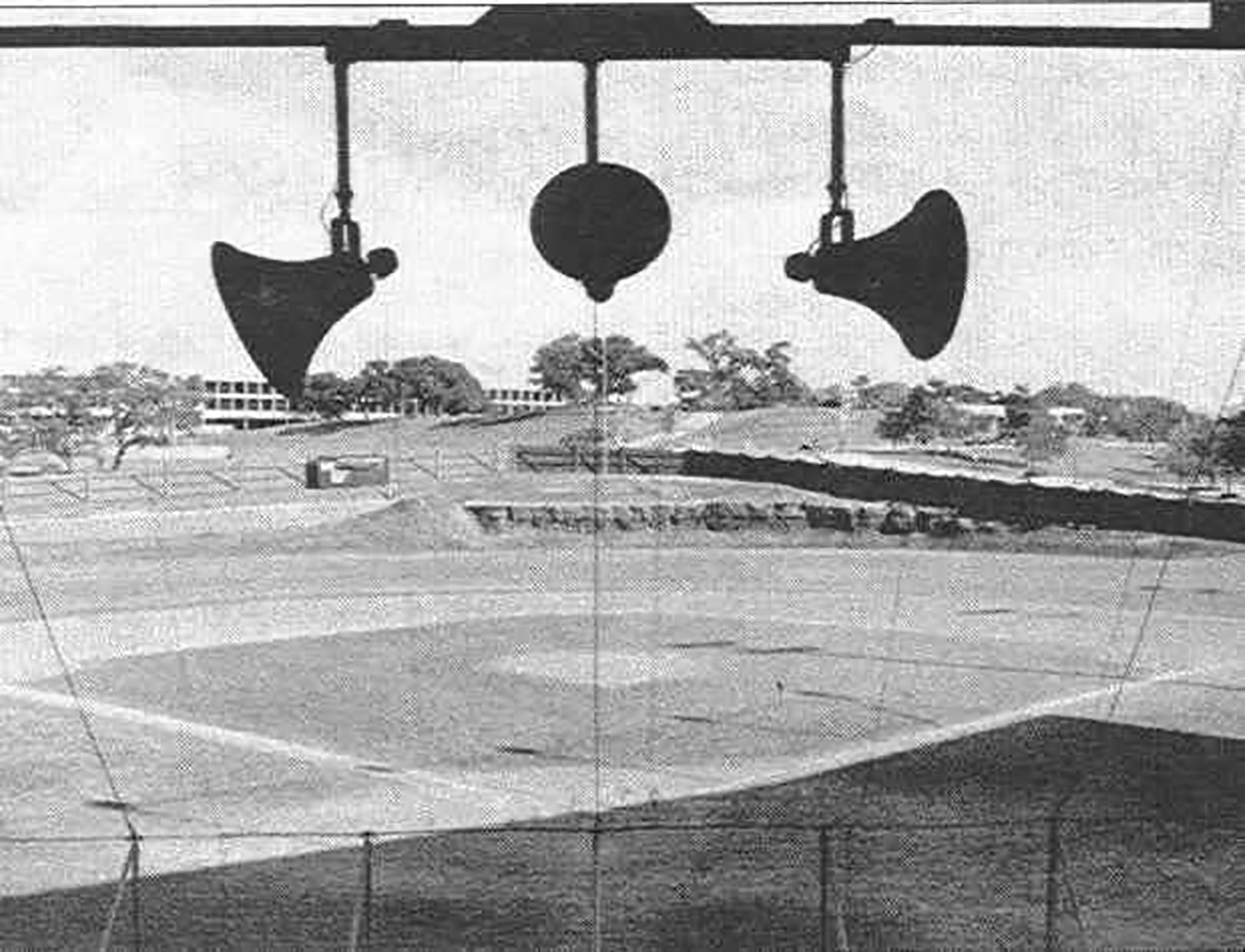 No one quite knows why the cliff was there. Part of the slope was blasted away when the park was built, but at some point -- whether costs ran too high or someone just liked the way it looked -- construction stopped.

Even more amazingly, though, the cliff was in play. The path to the left was called the "Billy Goat Trail," and left fielders would routinely scale it to retrieve fly balls. As you might imagine, this produced some pretty outstanding tales: left fielders trudging up to the plateau, only to find that the ball had ricocheted off the rock and ended up where they started; outfielders making the climb for a fly ball and promptly watching it fall below them. The NCAA even stepped in at one point, ruling during the 1970 playoffs that balls up on the cliff were ground-rule doubles.

Sadly, Clark Field was replaced for the 1976 season, depriving us of the inevitable moment some poor team gave up and decided to put an outfielder on the hill permanently.

2. Outfielders at Ponce de Leon Park had to navigate a magnolia tree

Well before the Braves came to town, Atlanta was home to one of the most majestic Minor League stadiums in the country: Ponce de Leon Park, or "Old Poncey," as the locals affectionately referred to it. Originally built in 1908 (it burned down in 1923 and was rebuilt), Poncey was a marvel. It seated 20,000, and even sat next to train tracks on which conductors would occasionally stop to take in a game.

But one of Poncey's most distinctive features was an odd one -- in deep center field, there was a giant magnolia tree. And by "giant," we do mean giant. Look at this thing: Poncey is believed to be the only professional park to ever include specific ground rules for a tree --  it remained very much in play until 1946, when the team's owner moved the fences in because we can't have nice things. The tree was only rarely a factor, though. The park played 462 feet to dead center, and legend has it that only two players ever managed to reach the tree on the fly: Eddie Mathews and Babe Ruth.

3. Wahconah Park frequently fell victim to sun delays, which we swear are real

Baseball and the sun have long waged war against one another, with victories struck by both sides. But Wahconah Park, home of the collegiate summer league Pittsfield Suns in Pittsfield, Mass., might be taking things a little too far.

The park was built in 1892, with home plate facing exactly west -- not a particularly big deal in the days before lighting introduced the possibility of night games. But when lights were installed and games moved to the evenings, a funny thing happened: During the longer days of summer, the sun just so happens to set right over the pitcher, leading to actual "sun delays" where everybody just waits around until the glare's gone. Oddly enough, that's not even the strangest baseball-related happening in Pittsfield: Official MLB historian John Thorn once uncovered a 1791 document making it illegal for anyone to play baseball within 80 yards of the town meeting house, because too many windows were being broken.

When the Dodgers relocated from Brooklyn to Los Angeles in 1958, they were temporarily homeless -- construction wouldn't wrap on Dodger Stadium until 1962. So, in a pinch, the Dodgers played their home games in the L.A. Coliseum. The Coliseum, as you may have heard, was decidedly not built with baseball in mind. Which is how you wind up with this:

No, that's not a Photoshop trick, left field really did just sort of ... end -- 250 feet (!) down the line, to be exact. Rather than leaning into the curve and just staging Home Run Derbies as home games, the Dodgers came up with a plan: A massive, 40-foot-tall screen that would hopefully keep home runs to slightly below preposterous levels.

As you might imagine, though, pitchers weren't exactly buying it. Giants starter Johnny Antonelli called it "the biggest farce I ever heard of," and Warren Spahn even lobbied for MLB to pass a rule requiring home runs to travel at least 300 feet. Some good did come of the Coliseum, though. Wally Moon, one of L.A.'s lefty sluggers, changed his swing dramatically to lift high fly balls the other way -- so much so that local journalists started calling them "Moon shots."

Home of the Twins from 1982 to 2009, the Hubert H. Humphrey Metrodome's roof was a reliable producer of all kinds of ground rules shenanigans. It once robbed Chili Davis of a home run after the ball hit a suspended speaker and was caught. Rob Deer managed to hit the thing in consecutive at-bats, both of which resulted in popups to the shortstop. It even decided to wage war on poor Matt Lawton:

But these grievances all pale in comparison to that of Dave Kingman, who on May 4, 1984, managed to hit a ball that quite literally never came down -- because it entered a drainage hole and was never seen again.

Chaos reigned. Minnesota first baseman Mickey Hatcher stole one of the umpire's balls, bounced it off the ground like it had fallen from the sky and promptly tried to tag Kingman out. The rest of the Twins infield, meanwhile, could only do this: The umpires eventually decided to award Kingman with a ground-rule double, because "fly ball lost in ceiling" isn't a ruling you come across every day.

Bill Veeck's life was seemingly a string of outrageous stories and wild ideas -- from signing 3-foot-7 Eddie Gaedel to installing a real, actual exploding scoreboard. But perhaps the most Veeck-ish story of all -- crazy, ill-fated, sure to upset the entire league and just a little bit brilliant -- was the trick he pulled in his first year as owner of the Indians. 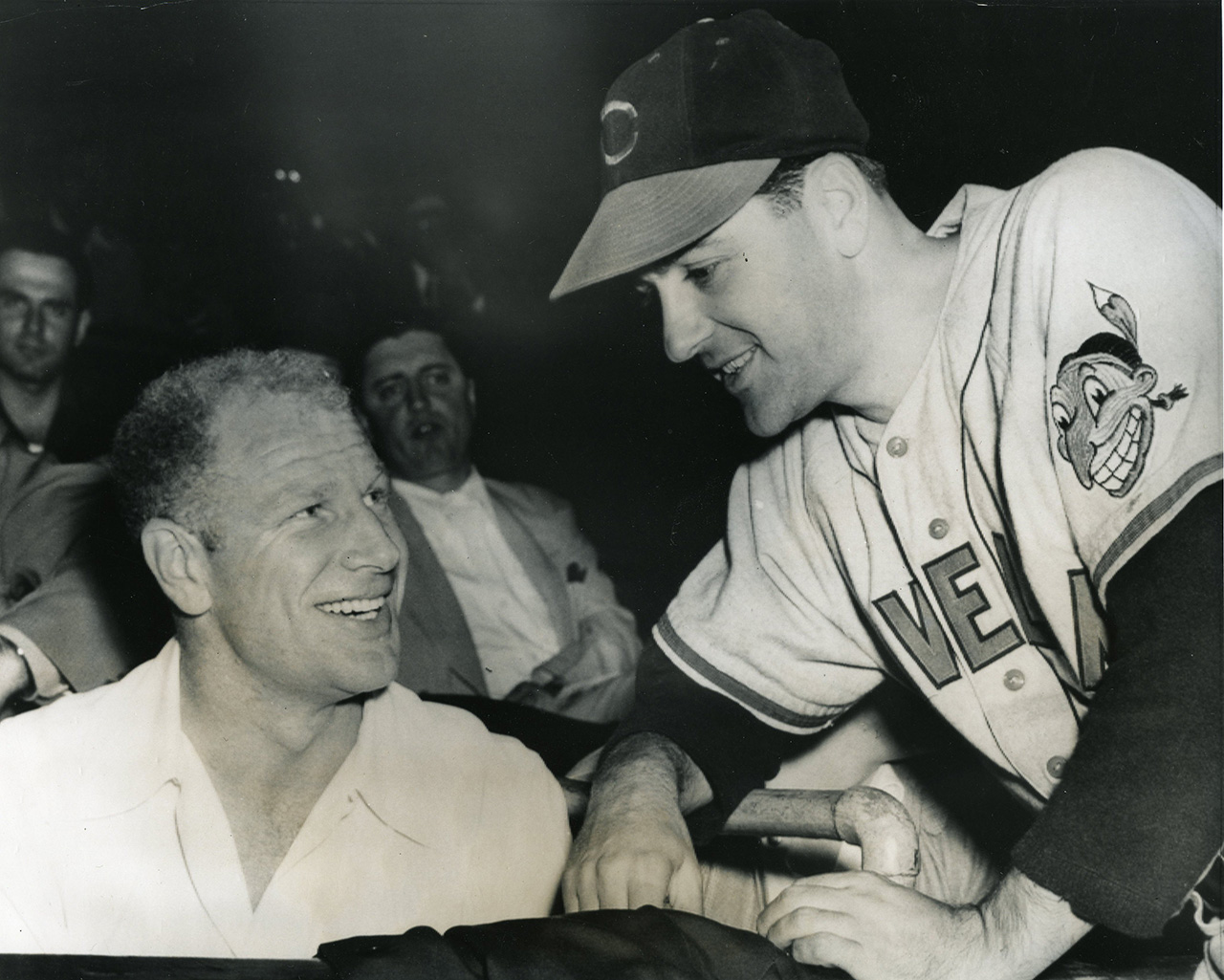 When Veeck purchased the team in 1947, the club played in the cavernous Cleveland Municipal Stadium, which measured 463 feet to dead center. So he built a fence to shrink the field, only with a little bit of a twist: The fence was portable -- the Indians could move it in and out by as much as 15 feet, depending on the opponent or anything else.

Cleveland's pitchers loved it, but alas, the rest of the American League did not. The movable fences lasted just one year, and were outlawed by the time the 1948 season rolled around.

7. The Athletics' innovative owner came up with an imaginary home run line

In the early '60s, the Kansas City A's were stuck in the cellar. The team hadn't finished with a winning record since 1952, and the team's new owner, Charlie Finley, was desperate to change that. Finley was a natural showman -- upon purchasing the A's, he quelled relocation rumors by publicly burning the stadium lease because it included an escape clause -- and he looked under just about every rock to find a way to create a winning team.

One of those rocks turned out to be in the Bronx. Finley discovered that the Yankees had been taking advantage of a short porch in right field, and he figured he might as well bring the idea west. Before the 1964 season, he knocked down the right-field seats at Kansas City Municipal Stadium, and erected a "Pennant Porch" in its place -- with a fence just 296 feet away from home, the exact same dimensions as Yankee Stadium. 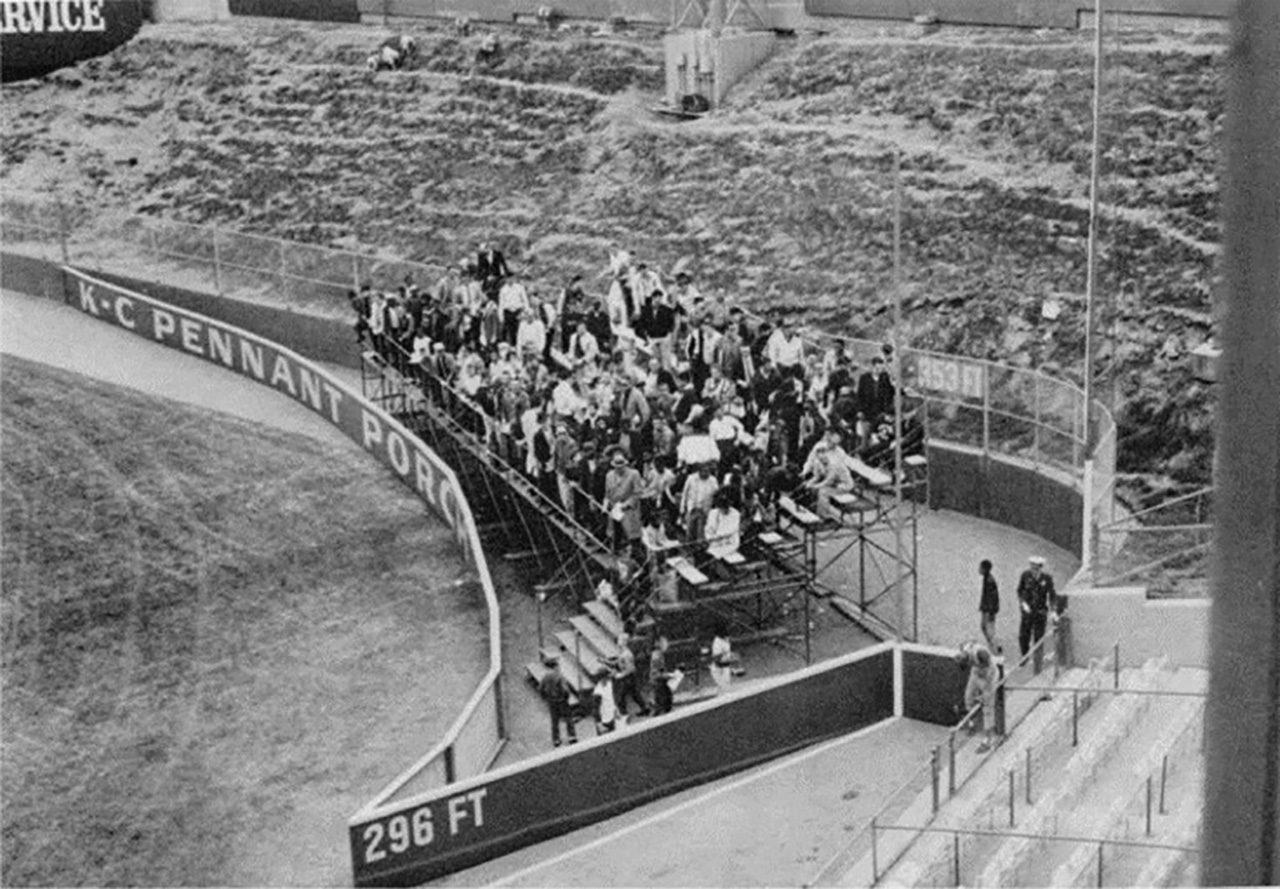 Wonderfully, though, this story was far from over: In 1958, MLB had passed a rule stipulating that no future ballpark could have a distance to the foul pole of less than 325 feet. Yankee Stadium and others had been grandfathered in, but Finley's plan was dead in the water.

His reaction was about what you'd expect from the man who once hired Miss USA as a bat girl: After moving the fences back to 325, he drew a line in right field exactly 296 feet away and instructed his PA announcer to say "That would have been a home run at Yankee Stadium" every time a fly ball crossed it. But the line didn't even make it through a full season -- Finley nixed the idea after opposing teams kept crossing it, while the A's finished in last at 57-105.