The White Sox once set off fireworks to scare gnats

Gnats: Those beady, pepper flake scourges of the skies. Scientists, scholars and learned men of medicine don't understand what purpose they serve*. Requiring warm-blooded food sources, they even have the audacity to interrupt baseball games. Unlike the bees that deliver honey and sustain our ecosystem in between interrupting games, the gnats exist simply to drive human beings mad.

*This is blatantly untrue. I think. I'm not a scientist.

On June 2, 1959, as the Orioles took on the White Sox in Chicago's Comiskey Park, we finally fought back. It was kind of like "Battle for Los Angeles" and "Skyline," except, you know, worth watching.

In the first inning, Baltimore's knuckleballer, Hoyt Wilhelm, took the field. After walking Nellie Fox in the first inning and starting Earl Torgeson with two balls through the cloud of bugs, the 35-year-old Wilhelm couldn't take it anymore. As the AP reported, the game was stopped for 16 minutes as the two teams joined together in an attempt to clear the field.

Orioles coach Al Vincent raced onto the field and, like a jock in the locker room, began snapping and waving a towel at the bugs.

The umpires and White Sox batboy Johnny Rosich ran around the field with "bug bombs."

The grounds crew even ran around the field with lit pieces of paper -- presumably looking like they were an angry mob of villagers ready to attack Dr. Frankenstein and his hideous creation.

Nothing worked until White Sox President Bill Veeck, the man behind some of the most memorable promotions in baseball history like the 3-foot-7 Eddie Gaedel, ordered fireworks to be set off (which is arguably the most American way to deal with an insect infestation). Thanks to the combination of smoke, noise and patriotism, the gnats zoomed off and play resumed. 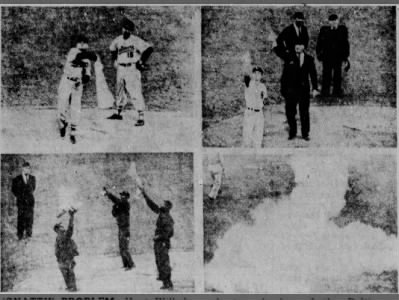 "It was the strangest thing that ever happened to me in a game. There was a cloud of gnats over the mound so thick that they were flying in my mouth. I never should have pitched a ball until they cleared away."

Though Wilhelm's scoreless streak was snapped, the Orioles and Wilhelm still emerged victorious, winning 3-2. Even if Veeck would take credit for the event at the end of the night:

"Since I probably will be accused of having something to do with those bugs, I might as well say now I have them in a bottle and have been training them for several years for just such an occassion."