In the top of Saturday's second inning, Pablo Sandoval somehow lifted a low Adam Wainwright curveball deep into right field. At first, it looked like Randal Grichuk was going to make the catch -- that is, until he hit the wall. Grichuk lost the ball on impact and watched helplessly as it popped out of his glove and rolled away.

While this appears to be a common play, there may be a more powerful force at work. Namely, was the wall interfering with the catch? Instead of being an inanimate onlooker, is the right-field fence secretly a Giants fan?

There are three reasons this may be true.

1. Look at the way Grichuk falls away from the wall. It looks less like he's bouncing off the fence and more like something has pushed him. 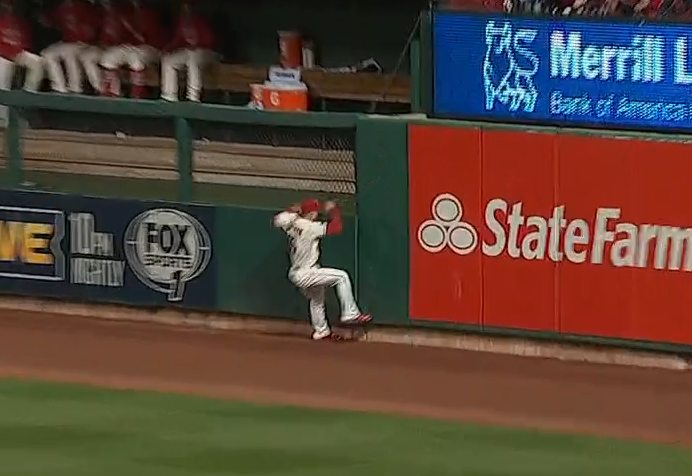 2. Is the fence smiling when Grichuk hits it? I've highlighted it in case you need any help. The wall even has expressive eyebrows. And finally, 3. The real shocker. If you heavily edit the photo, the wall not only looks orange and black, which are the Giants colors, but it appears to display a subliminal message for the San Francisco Nine: While these are only theories, you have to admit that the evidence is kind of damning. If the wall didn't impede Grichuk, Sandoval would have been out. But Panda's drive went for a double and he came around to score four batters later, giving the Giants a 1-0 lead they would never relinquish.

And if you want to read more of these kind of conspiracies, please subscribe to my newsletter where I investigate such buried truths as TED WILLIAMS: WAS HE A ROBOT (PROBABLY) and KEN GRIFFEY JR: DOES THE JR STAND FOR 'WHO SHOT JR?'