102 years ago today, the Dodgers played their first ever game at Ebbets Field

On April 5, 1913, Ebbets Field opened its doors for the very first time as the Brooklyn Dodgers took on the New York Yankees for a 3:30 p.m. exhibition showdown.

With 25,000 in attendance and 7,000 others watching "the game from the bluffs that loom above the field," Charles Ebbets had to turn away an additional 10,000 fans who wanted to catch the game. Though fans may have wished the park was a little larger, at least they didn't have to put up with the smell of rotting fish.

How is that relevant, you wonder? Because the "grasslets" on the new field were fertilized with fish chum, during the offseason it gave off "one of the most aggressive odors known to science." Fortunately that had dissipated long before the stadium's opening.

Before the game began, Ebbets' sister, Genevieve, threw out the first pitch. Though we have no record, we can only assume it was better than 50 Cent's toss. 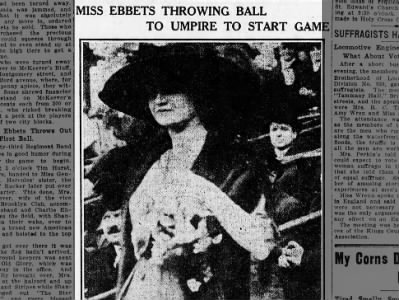 Coming off a 22-18 season in which he led the league with six shutouts, Brooklyn ace Nap Rucker had the honor of throwing the first "actual" pitch. The Yankees' Bert Daniels took Rucker's "fadeaway" for a called strike and, with that, the stadium was christened.

The Dodgers would soon take a 2-0 lead thanks to an inside-the-park home run from Casey Stengel and a deep drive from Jake Daubert. As The Brooklyn Daily Eagle put it, the homers:

"...brought in thunders of applause that rattled over the valley and dell like the roar of artillery going into action with ten-pounders."

After the Yankees tied it in the top of the ninth on a throwing error from reliever Frank Allen, Red Smith made sure the Brooklyn fans went home happy. With Zach Wheat on third base, Smith hit a line drive to center field to give the Dodgers the 3-2 victory.

However, I bet there is one question that is still burning in the back of your mind. One question that you assume will never be answered: Namely, who installed the steam heaters at the stadium? Well, wonder no more:

Though they won the exhibition, the Dodgers would go on to drop their regular-season debut,1-0, to the Philadelphia Phillies on April 9. Since videos and GIFs were still decades in the future, "Rice" from the Brooklyn Daily Eagle made sure that future generations would forever remember Benny Meyer's blooper:

"One of the sad incidents that make baseball ... and also makes for the enriching of the language in forceful expression, came to pass yesterday, when Benny Meyer, the promising young stock drover of Hematite, Mo., dropped a foul from Lobert in the first inning and wrought thereby a foul deed."

We're guessing it looked a little something like this: