Get ready for this weekend's German World Series

While MLB fans are getting ready for a late-season playoff push, German baseball fans are already preparing for their World Series: the wonderfully named "Baseballmeister."

Starting on Saturday, the two best teams in the southern division, Regensburg Legionaire and Heidenheim Heidekopfe, will square off with the title on the line.

MLB.com recently caught up with Sascha Staat (a perfect name for a baseball fan), who co-hosts the league's official podcast, Bases Loaded, with Thomas Rademacher, to talk about the league and its upcoming championship. Regensburg found its way to the finals thanks to Matthew Vance's .404 average on the season and Kai Gronauer's six home runs, while Mike Bolsenbroek led the league with a 2.23 ERA in 76 2/3 innings.

Meanwhile, Heidenheim was paced by Aaron Dunsmore's .439 average and James McOwen's seven home runs, with 11-game winner and former 25th-round pick of the Red Sox, Tyler Lockwood fronting the rotation (and no, he's not the werewolf from "Vampire Diaries.")

While the league isn't entirely professional, as Staat explained in a separate interview, some players can earn up to 500 Euros a month as "import players," or players who don't have a European Union passport. It makes them the equivalent of the designated players in Major League Soccer, with each team allowed to have up to three imports.

However, because many of the teams lack the funds, most of the players are locals from near the city, originally getting into baseball through the team's youth system at around the age of 12.

Staat explained, "For German players, most of the teams go to schools and they show the young kids, 'Oh, well, here's a cool sport you could do. It's baseball. Would you be interested to come to our teams and play in our youth system?"

Staat also points to Wilson Lee of the Bonn Capitals, a 23-year-old Australian who spent two years in Rookie-level ball with the Pirates and plays for the Adelaide Bite in the Australian Baseball League during the winter, as one of the league's stars.

Nicknamed "The Prodigy" for his hot start in the league, Lee finished the year with a .453 average and tied for the league lead with 5 HRs, while also posting a 1.44 ERA in 81 innings on the mound. The team names are quite impressive. Though there are still the Cardinals and Athletics, there are also the Paderborn Untouchables (who once won six consecutive titles), Hannover Regents and Hamburg Stealers, complete with wonderful smiling burglar logo: Although, my personal favorite belongs to the Dohren Wild Farmers in 2. Bundesliga. Sadly, their logo is not as outrageous as it could be -- an image of an unhinged farmer atop a thresher living only in my dreams. Which is another quirk to the league. Like in European soccer, the Baseball Bundesliga has promotion and relegation, too, with the worst team in the North and South getting sent to the lower league and the two best in the lower division getting what is essentially a call-up.

Though the league differs from the Majors, there are still many of the touches that you would see at an American game. Like these promotional jerseys that Regensburg wore to celebrate Oktoberfest . 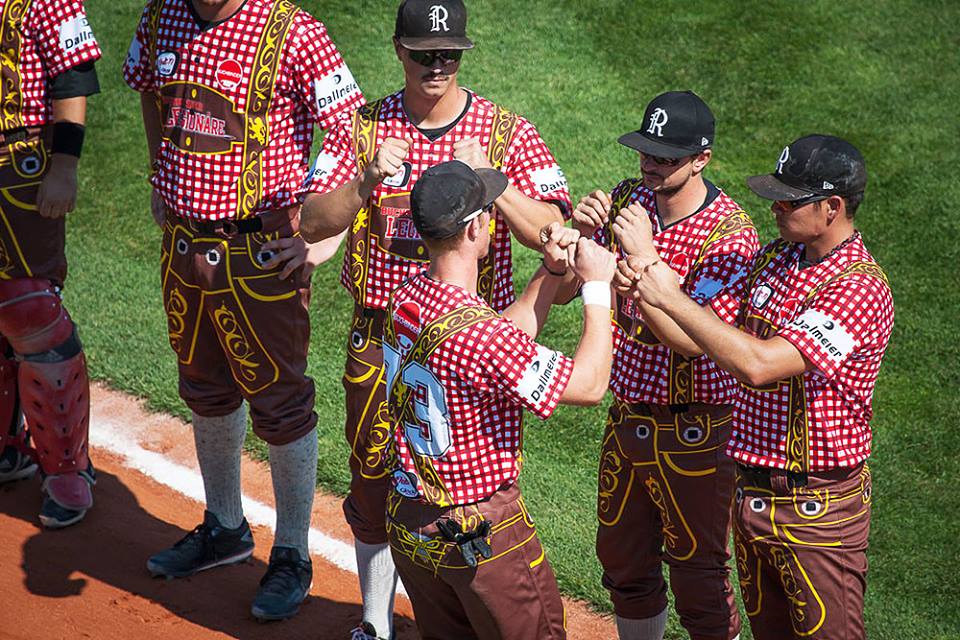 And, of course, hot dogs and hamburgers are available as the parks serve food in the  "American style." In Solingen, home of the Alligators, "There's a small booth where they sell American products which you cannot buy in Germany in the supermarket," said Staat. "The people that go to baseball games in Germany are quite connected to the States and they like that they can buy American products."

Naturally, that also means that "Fear the Beard" has spread around the globe. The Bonn Capitals had their own great facial hair-off in 2014: Staat is hopeful for the sport's growth in the country, though he knows that the country will need a big-name player to join the Major League ranks to really spark a fan movement. He and many German baseball fans are hopeful for Twins prospect, Southern League MVP and German-born Max Kepler.

For now, though, we should just look forward to the two best teams in Germany taking each other on in the Baseballmeister. Game 1 begins at 8:45 a.m. ET on Saturday.