Here are the best baseball DOS games you can play online

Being an adult is fun most of the time (really -- if you want to eat ice cream for breakfast, who's going to stop you?), but sometimes we want a break. We want to go back to long summer vacations and playing all day if, like me, you define "playing" as "sitting in front a computer for eight hours."

Fulfilling the dreams of indoor kids everywhere, The Internet Archive recently released over 2,000 browser-friendly MS-DOS games. Thankfully, we've saved you from playing President Elect 1988 until your weird third party changes history by collecting all of the best baseball games in one convenient location. Let's get started: 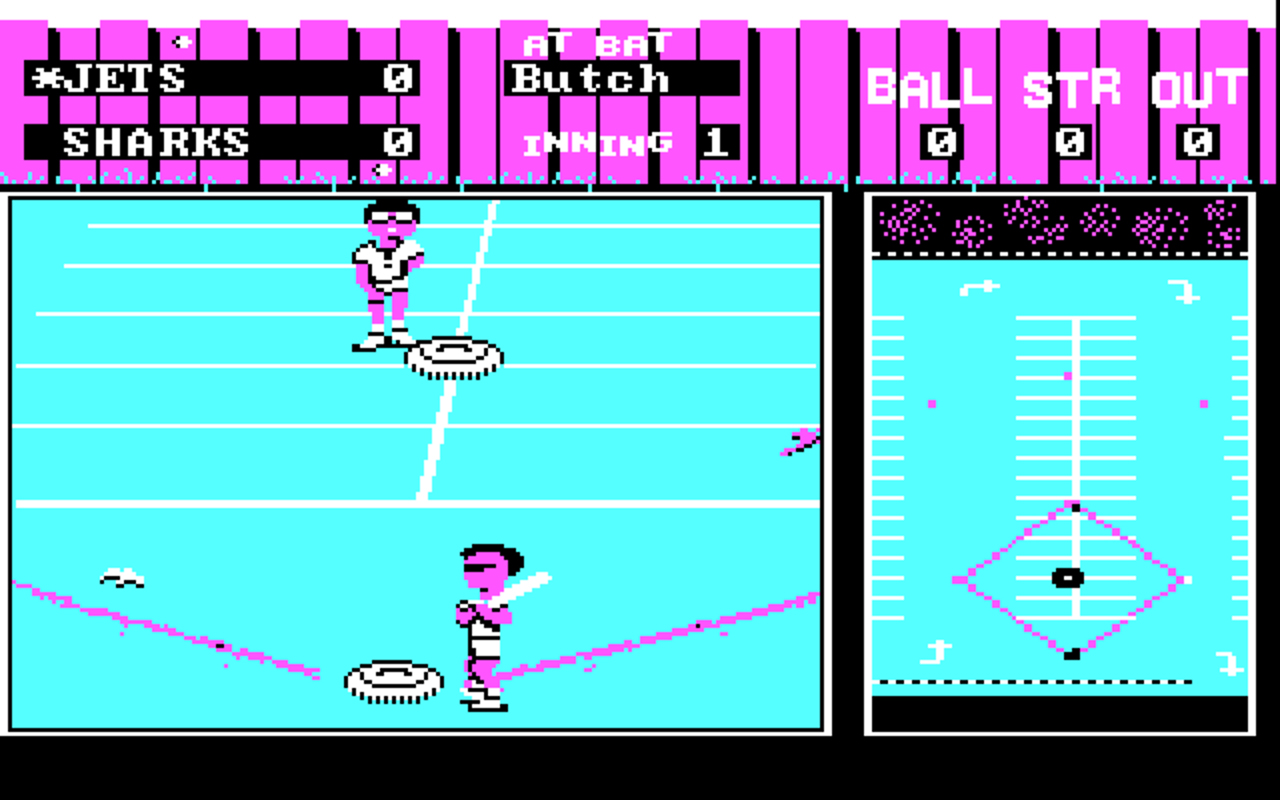 This is truly the baseball action game for all the kids who want to feel like they're playing outside but have no interest in actually touching real dirt. Your team of loveable street urchins plays ball in parking lots and backyards. In addition to standard fielding, you and your fuchsia friends also have to deal with tree stumps and discarded tires. 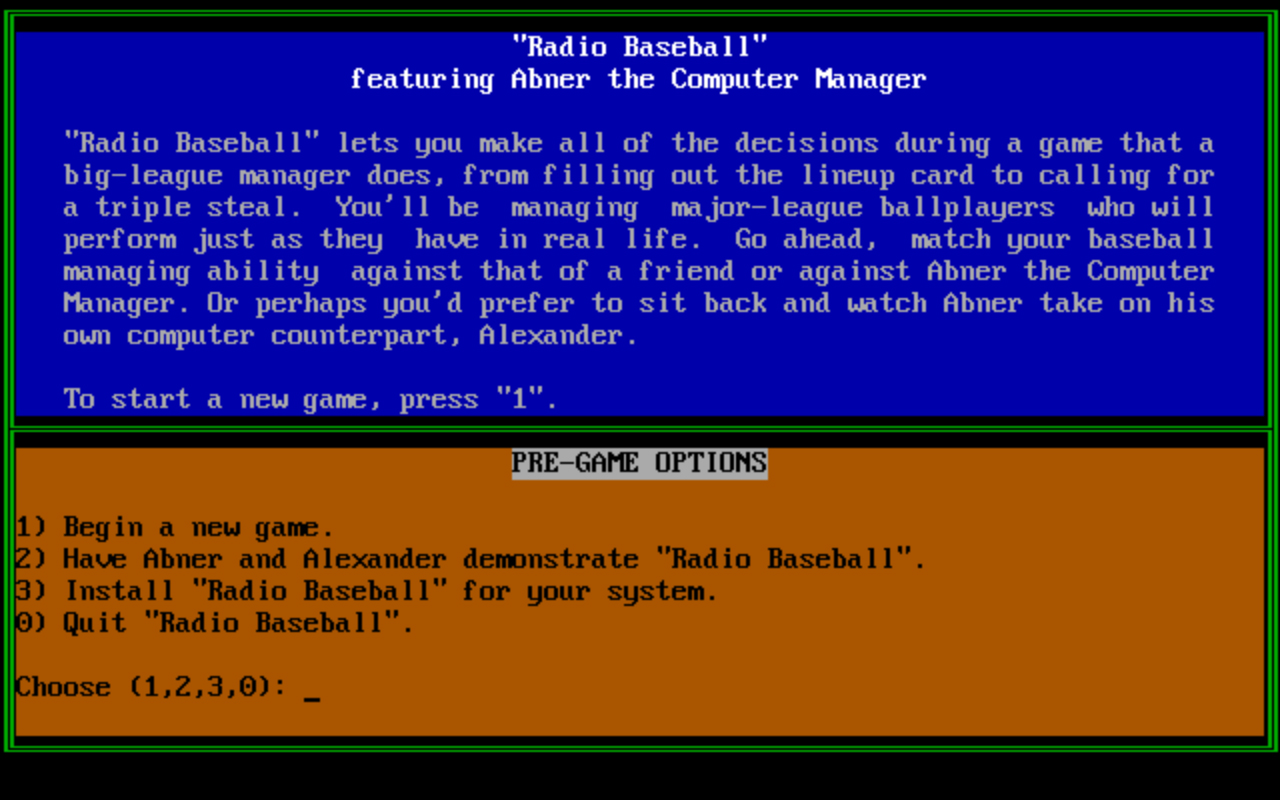 Maybe you're not really into graphics or player controls. Maybe you prefer just reading. As you may have guessed from the name, Radio Baseball is an almost entirely non-visual medium. After you choose a set of players (a historical championship team or a squad of baseball's all-time greats), gameplay involves making managerial decisions: Even though this game lacks optics, the baseball action is surprisingly good. In the MicroLeague Baseball series, you are the manager of a historical team, but unlike Radio Baseball, plays are animated. It's so dedicated to veracity that after making lineup choices, you have to listen to a short MIDI version of the national anthem before play begins. Then, indistinguishable pixels named after your favorite players will ask for your very limited input until you or the computer wins the game. Created by Ocean Software, a U.K. developer, this game reflects what presumably all Brits think baseball looks like. There's a carefully animated American flag in the corner at all times, and the giant rectangle at the top of the screen is what I assume is a massive Jumbotron. The controls are pretty faithful to my childhood memories -- like in gym class, if you don't feel like playing, you can just run around the outfield: When the first Earl Weaver Baseball came out in 1987, it boasted a feature that has since become standard in baseball video games -- park-adjusted play. That's probably why there's an option on the menu screen, along with "GM Mode" and "Adjust Roster" that simply says "Look At Park." Select one, and then gaze upon it in all of its small graphics engine glory: But it was also a hit because it featured serious baseball strategy devised by none other than the titular Orioles manager. There are two methods of play: Manager mode is for the serious strategist, and arcade mode is for people who just want to rake: 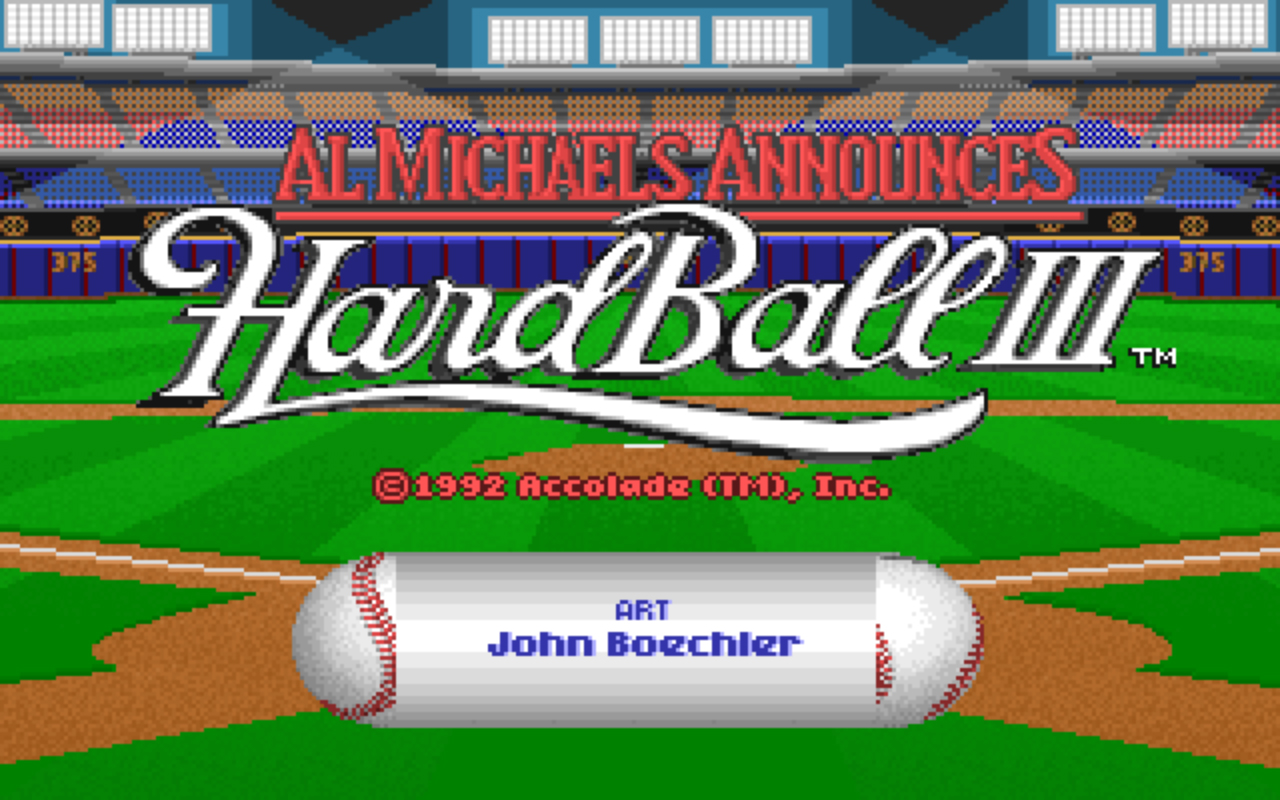 Thanks to Earl Weaver's series, baseball games were starting to take player licensing seriously. HardBall III is worth the play just to see how some of the most famous ballplayers of the time translate to 16-bit graphics. Here is a not-inaccurate representation of George Brett: 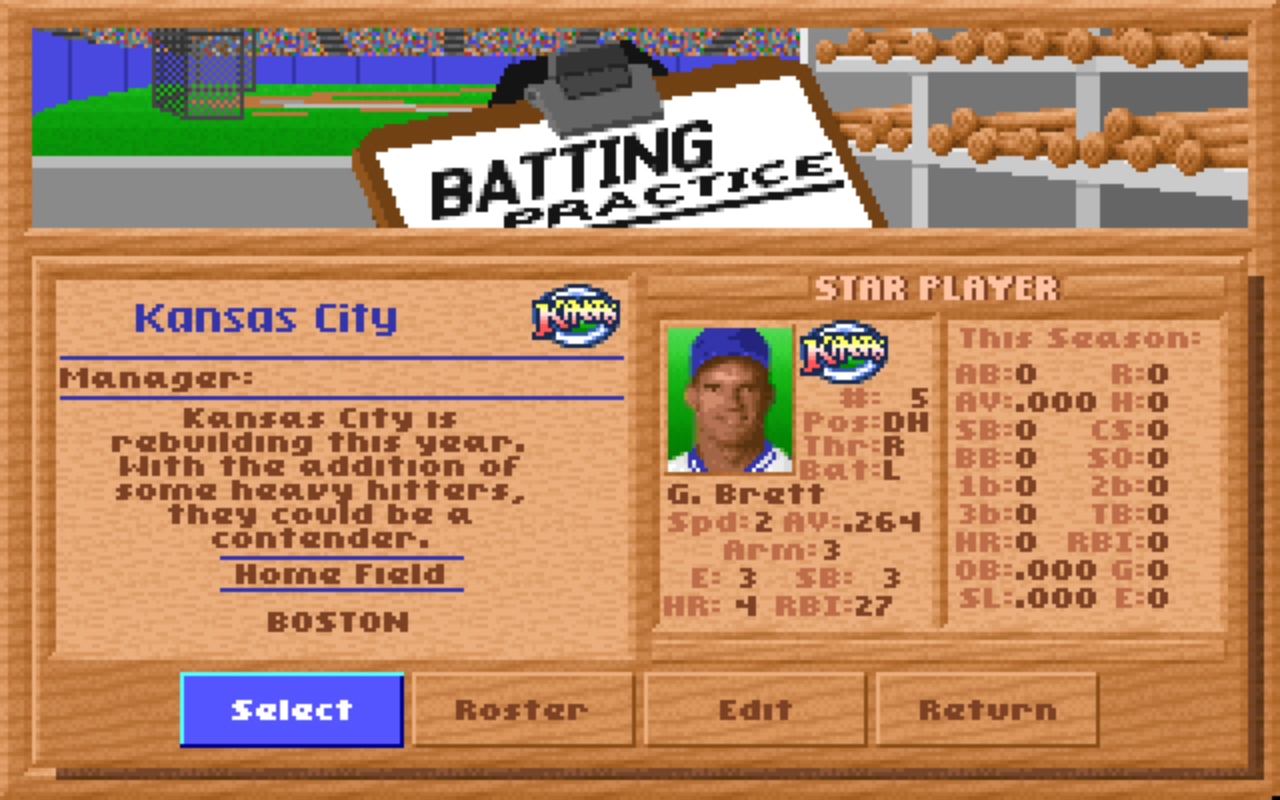 Some of the other games on this list feature voice acting (read: a game developer yelling "safe" or "out"), but this game tapped Al Michaels. Due to the pieced-together nature of the audio, you may feel like every play is happening during Game 3 of the '89 World Series. Putting more emphasis on action than strategy, HardBall III was ahead of its time. No, seriously. It was 1992 and it had instant replay: 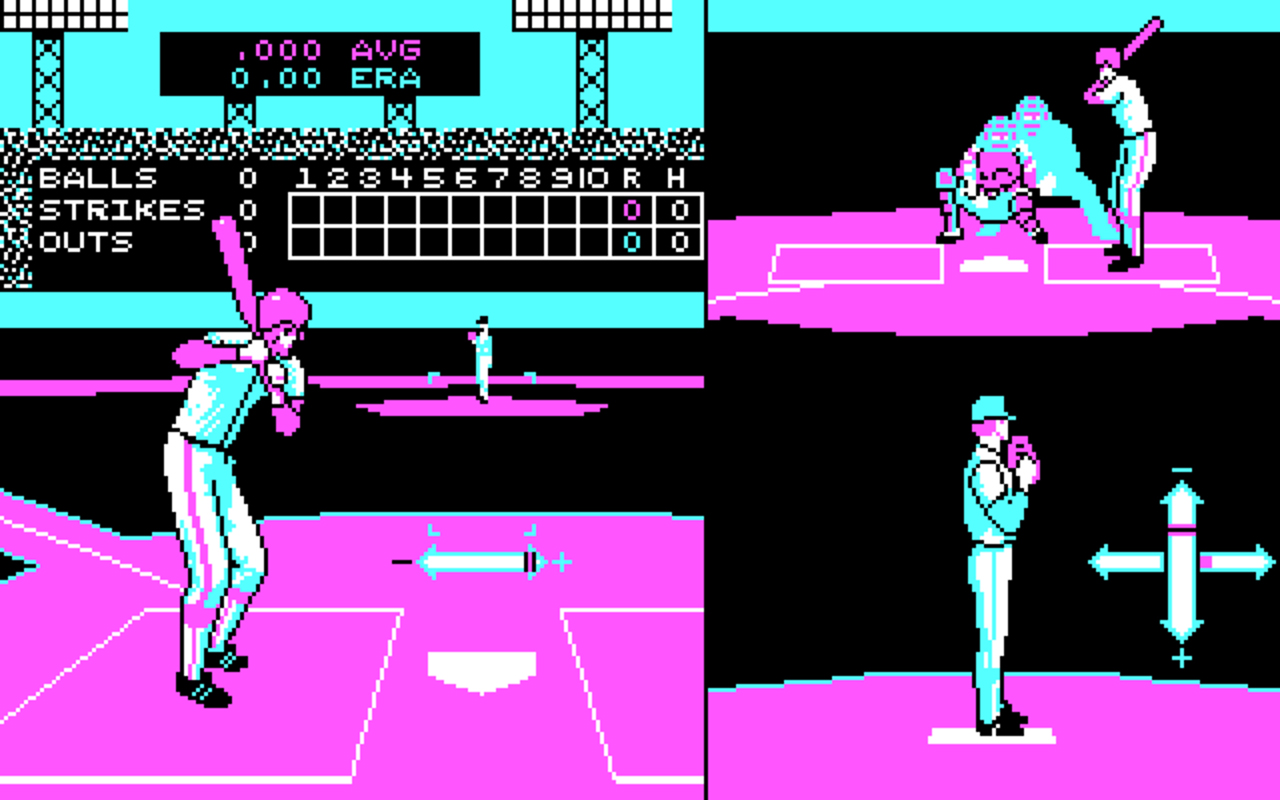 This is not a game about Orel Hershiser sneaking into a besieged village, Solid Snake style. But it is a decent baseball action game with controls more intuitive than most of the games on this list. Since this is the PC edition of the original arcade version, there is no league mode. If you want to play your friends, dig out your old joystick or get ready to share the keyboard. Because it was released as shareware, you can only play Epic Baseball in exhibition mode. But that's enough to get a sense of the game. It requires very little hand-eye coordination outside of being able to differentiate the keyboard from anything else in space. You can choose two historical teams, and after making a few managerial decisions, let the stats fight it out: Another game that combines managerial decisions and action, The Sporting News Baseball is one of the few titles from the '80s that allows you to choose your own lineup and name your own team. But it turns out that even when your pitcher is Walter Johnson, if you can't figure out the controls, you'll give up three runs before the first out: The most enjoyable part of this game is historical lineup flexibility: 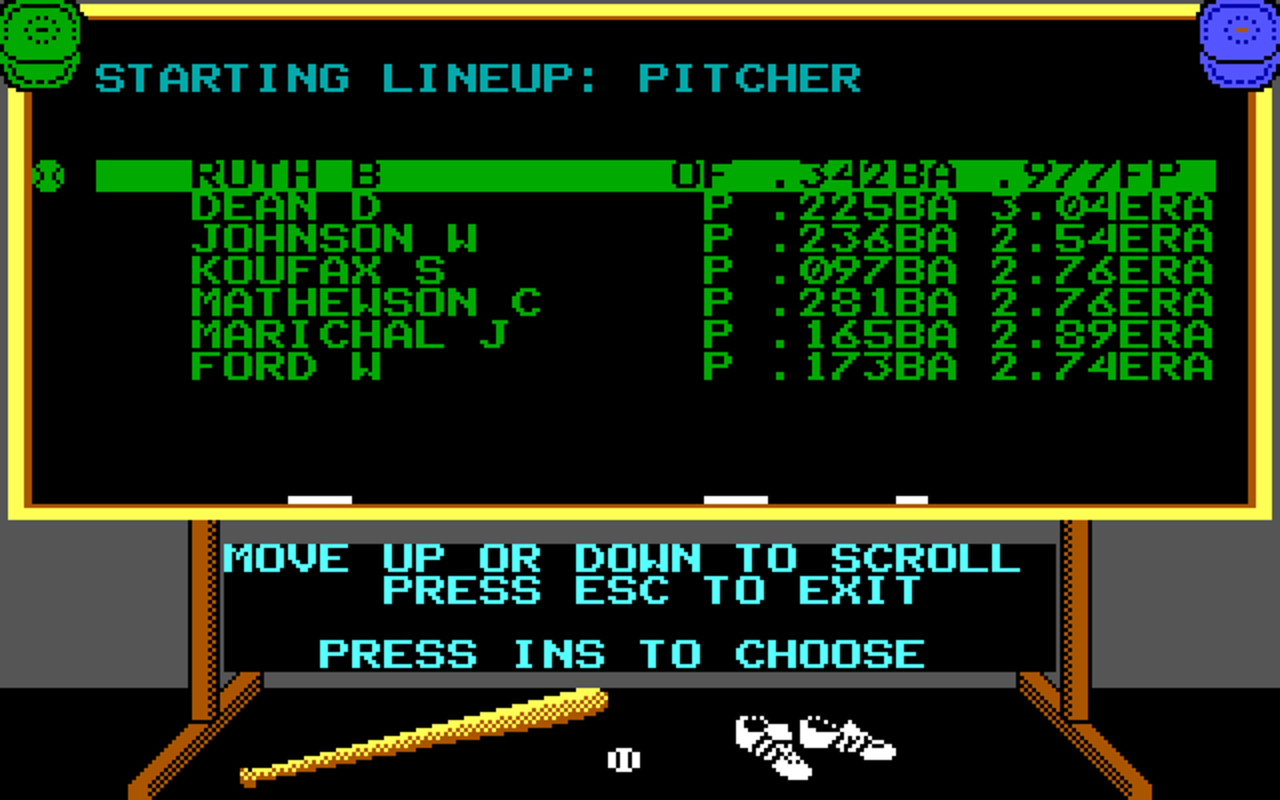 If you wish Field of Dreams was less about family and love and more about serious baseball action, then Home Run Derby is the game for you. In this title from MVP Software, the ghosts of players past emerge into an Iowa cornfield. Instead of teaching a father and his family life lessons, they make fun of current (well, mid '90s) baseball players and challenge them in a Home Run Derby.

Rather than deal with the stunning realization that ghosts exist and are apparently corporeal enough to hold a bat, in-game TV station "BSPN" affords you, a lowly rookie, the chance to compete against some of your favorite players: 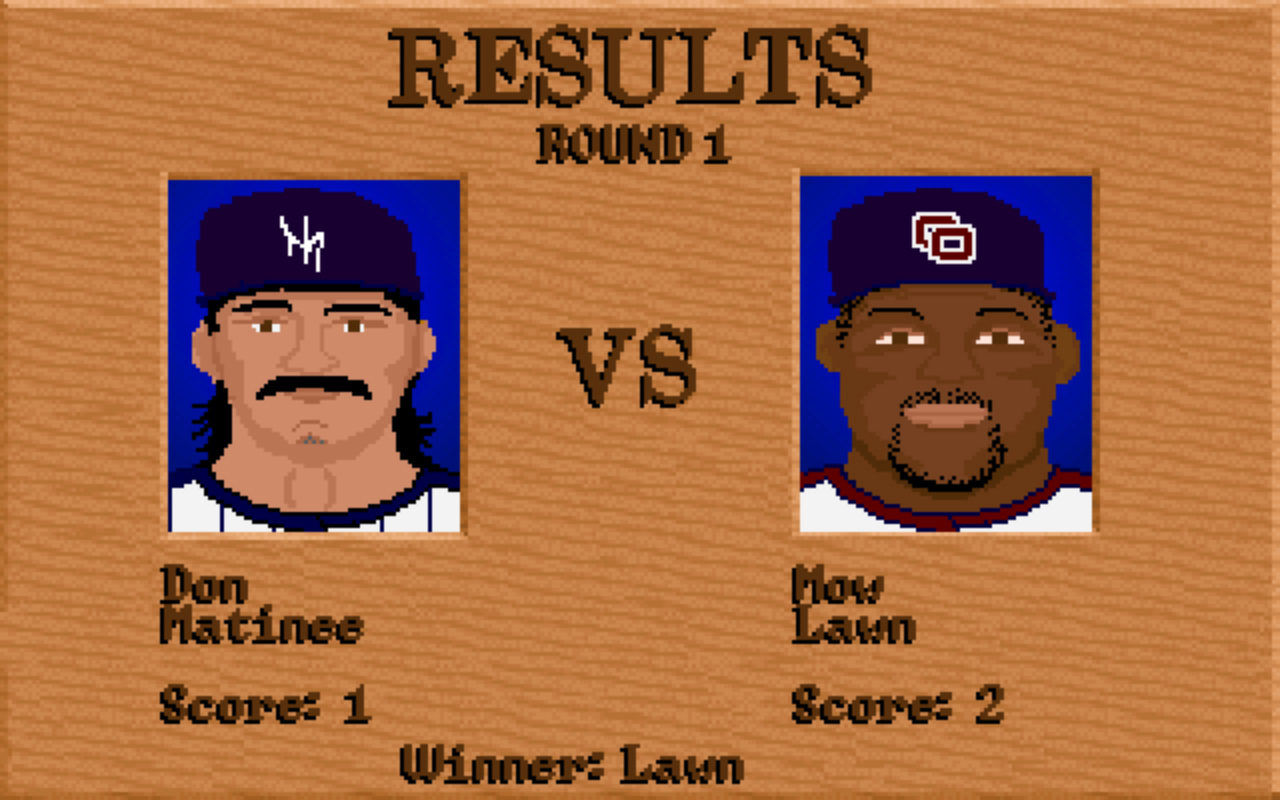 Isn't everyone a fan of Mow Lawn? But to defeat "Ruth Babes," you'll have to make it past Barty Bunds and Junior Griffin Jr.

OK, this isn't technically a baseball game, but it is if you name your entire party after baseball players: