Bryce Harper is surrounded by flies: This week in Minor League Baseball promotions

It's still July, which means that, yes, Minor League teams are still celebrating Christmas in July. This week, we turn our out-of-season holiday spotlight on the Harrisburg Senators.

On Saturday, the Senators -- Double-A affiliate of your (or at least someone's) Washington Nationals -- are giving away 1,000 Bryce Harper snow globes. This makes sense, sure: Harper played 72 games for the Senators in 2011 (when he was just 18), and a snow globe featuring this well-remembered teen phenom fits nicely within Saturday's larger "Christmas in July" theme. 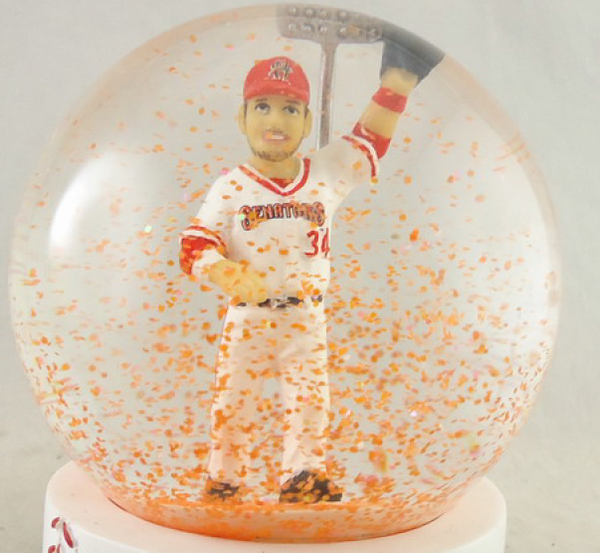 But in Minor League Baseball, things inevitably get weird. And here's where the Senators' giveaway gets weird: It's not actually a snow globe, as the frozen white stuff is nowhere to be seen. Instead, Harper is surrounded by a horde of gold-tinged mayflies.

An insectian deluge of such magnitude is actually common at the Senators' home of Metro Bank Park, which is located on Harrisburg's City Island and surrounded by the Susquehanna River. Mayflies ascend in droves toward the gleaming ballpark lights, hover above players and fans and, all too often, meet an untimely death by electrocution. Such was Harper's bizarre reality in 2011, now preserved in commemorative "snow" globe form.

This isn't the first time that the Senators have poked fun at their prodigious mayfly population. Prior to the 2014 season, the team sent out a press release claiming that they had changed their name to the "Mayflies." But, alas, said press release was sent out on April 1 and, thus, the team was just fooling. But on May 23 of this season the Senators actually did change their name to the Mayflies, even if it was only for "What If?" Night. Finally, the insects got their due.