From 30 World Series hopefuls, only a few remain. In case you haven't been following every contender, here's a catch-up on what you missed and what to expect next. In this edition: The Oakland Athletics.

Those moneyballin' mavericks are at it again, defying expectations and capturing the AL West crown for the second straight year. Oakland succeeded with superior depth, innovative platooning and defensive shifts, and terrific pitching from everyone from rookie Sonny Gray to 40-year-old All-Star Bartolo Colon.

The Athletics and their loyal fanbase have provided no shortage of memorable moments this year. Here are a few favorites:

5. On Twitter A's fan Ian Sagabaen goes by "Gr8estSignMaker" and after seeing his work and his process, it's hard to disagree: 4. Yoenis Cespedes was the breakout star of this year's Home Run Derby. The outfielder crushed the opposition and executed an epic bat flip to celebrate: 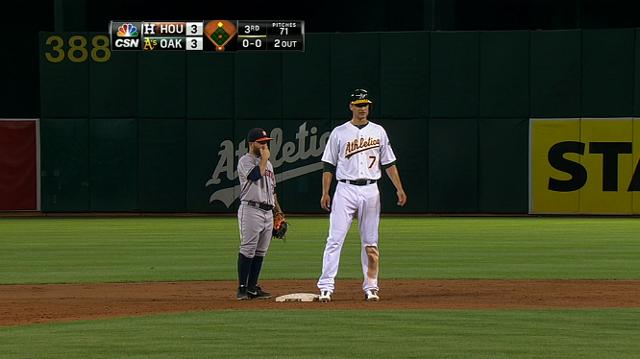 He's also proven himself adept at walk-off RBIs in the 18th inning (and all the many commensurate celebrations):

2. Josh Donaldson hit an outfield bullseye with a home run. Doesn't matter if it was in BP -- that was definitely worthy of a victory lap around the entire infield:

So, what can we expect from the Athletics in October? A few predictions:

-- Donaldson hits the bullseye during a game and the Athletics are awarded a 20-run bonus, per Coliseum ground rules.

-- An opposing player hits a ball over the fence, but Jim Harbaugh, sitting in the bleachers, directs it back onto the field of play by glaring at it.

-- They win a game on a walk-off. Because this is the postseason, Josh Reddick has prepared a delicious strawberry rhubarb blueberry pie to shove in his teammate's face rather than his customary whipped and/or shaving cream.