From 30 World Series hopefuls, only a few remain. In case you haven't been following every contender, here's a catch-up on what you missed and what to expect next. In this edition: the Pittsburgh Pirates.

Pittsburgh hadn't had a winning record (let alone a postseason appearance) since 1992 before taking the NL by storm thanks to a standout pitching staff, the raw power of Pedro Alvarez, a great rookie year from Starling Marte and the five-tool brilliance of possible MVP Andrew McCutchen.

The Pirates and their long-suffering, now-celebrating fans have provided no shortage of memorable moments this year. Here are a few favorites:

5. Let's say you're a pirate. Let's say you have a pirate girlfriend who you want to propose to. Let's say it's International Talk Like a Pirate Day. Where's the ideal place to pop the question? A Pirates game, naturally: 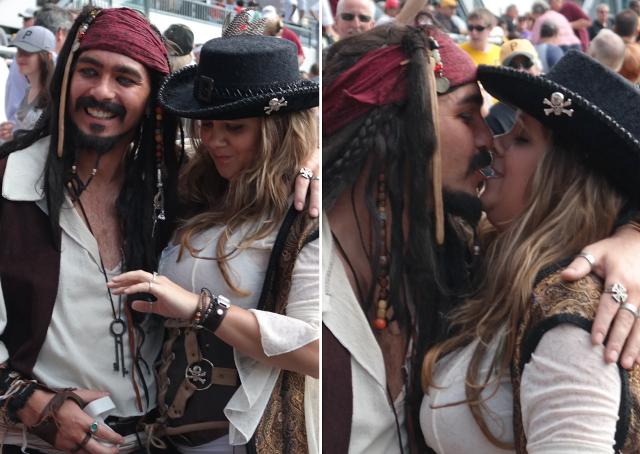 4. Did I say McCutchen is a five-tool player? Scratch that, I meant six. His sixth tool? Drawing. This is his work: 3. For the first time in 13 seasons at PNC Park, a Pirate home run hit the water beyond right field on the fly. Garrett Jones took it to the river and dropped it in the water:

2. A.J. Burnett appears to be some kind of magician, vanishing a rosin bag into a cloud of smoke not once but twice in 2013:

1. McCutchen is way too cool to simply walk back to the base after leading off. He dances back:

So, what can we expect from the Pirates in October? A few predictions:

-- Fans are confused when a Burnett pitch explodes in a majestic blast of white powder between the mound and home plate. They're even more confused when the ball is rediscovered in Russell Martin's glove for a key third strike.

-- The betrothed pirate couple return from their honeymoon ravaging the Spanish Main to host a silver pieces of eight giveaway for PNC Park fans at each postseason game.

-- McCutchen hits a series-winning walk-off home run and does Terrell Owens one better by pulling an artist's pencil from his sock, retrieving the ball and drawing a perfect likeness of himself on it.