From 30 World Series hopefuls, only a few remain. In case you haven't been following every contender, here's a catch-up on what you missed and what to expect next. In this edition: The Baltimore Orioles.

Big contributions from All-Stars Adam Jones and Nelson Cruz helped give the Orioles firepower the rest of the AL East couldn't match in 2014, and Baltimore ultimately clinched the division with 11 games remaining in the regular season. Here are a few highlights from the year that was:

The walk-off shaving cream pie is a dugout staple, but the Orioles kicked it up a notch this season by busting out the real thing: 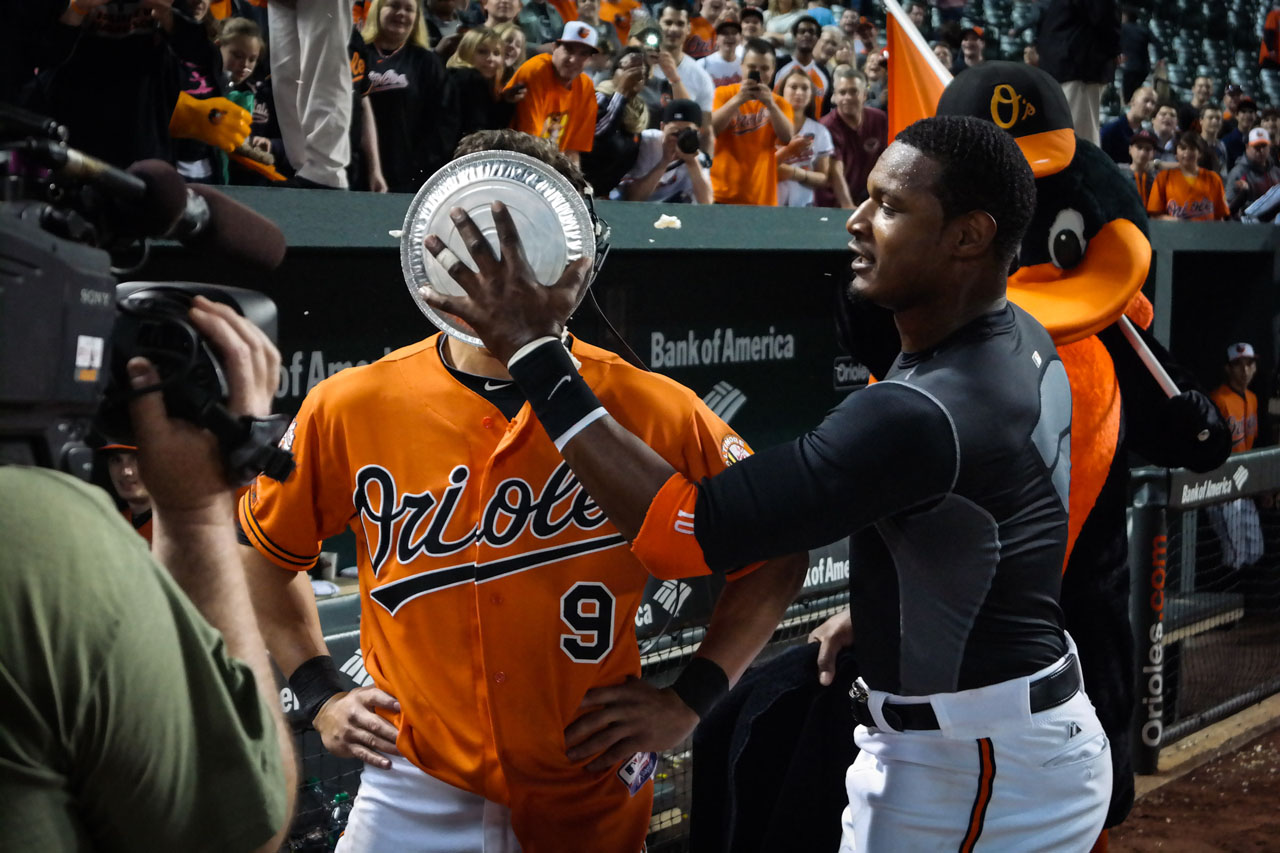 But it's not just the players getting cream pies in the face -- it's pretty much anyone in the vicinity of the Orioles dugout. Like, say, the Oriole Bird:

Or some random sound guy:

And even the fans:

But then other times, the pie got to serve out its true purpose -- being eaten:

No matter what was happening, you could rest assured that an Orioles fan would be there.

Back in March, the U.S. Mint released a limited edition baseball-themed coin -- the first curved coin ever minted. Who was the first person to pick one up? Yep, an O's fan:

And when one fan dared to venture into the throngs of the King's Court in Seattle, do you know which team was his favorite? That's right -- Baltimore:

Who's that dancing to the beat of their own drum? You know who:

And when one fan made the decision to watch the game while pumping a little iron, you'd better believe he did it watching the O's:

3. House of Cards' Frank Underwood is an Orioles fan

To be fair, it's entirely possible that House of Cards [spoiler alert!] President Frank Underwood is not actually an Orioles fan but is merely showing his support in exchange for some good PR in the Beltway.

But, we choose to think the famously devious politician long ago chose the Orioles as his favored team as part of some Machiavellian scheme to win Maryland in a landslide without antagonizing the American Southeast. 2. Adam Jones is as consistent as he is eccentric

Jones cracked his 25th homer on September 9th, making it four straight seasons with at least that many long balls -- the first such streak in Baltimore since Rafael Palmeiro did it from 1995-1998.

But that's not all:

If he can maintain [his current walk rate], he would join Garret Anderson (2000-03) as the only players in history to post four straight seasons with at least 25 homers and a walk rate below five percent. Only one other player -- Andre Dawson -- had four such seasons in his career.

Plus, he's not too fond of cameras:

1. There is an actual human being named Camden Yards

He exists, he plays baseball and he's a huge Orioles fan. Most importantly, he's real.

And Camden Yards is his legal name: It's helpful that his parents are Orioles fans and not, like, passionate Burt Reynolds fans. Camden Yards is a way cooler name than Thelongest Yards.

So, what can we expect from the Orioles in October? A few predictions:

After years of practice, catcher Caleb Joseph will finally master his slip-'n-slide technique during a prolonged ALCS rain delay.

When the Orioles season finally ends, announcer Gary Thorne releases a compilation album in which he sings all the finest jingles of the 1950s.

Should the Orioles be eliminated before the World Series, pitcher T.J. McFarland will fall back on his safety gig: announcing.

This guy will set some money aside for a (possible) new hat.