Join Cut4 on their trip south for Spring Training

Some of the Cut4 staff has traveled south for spring, taking shelter in beautiful sunny Florida to enjoy the sights, sounds, foods and fans of MLB's Spring Training. As we venture through the many stadia of the Grapefruit League, we'll keep you updated on what it's really like to check out 15 MLB teams, explore the backroads of the Sunshine State and watch a whole lot of baseball.

Fort Myers, Fla., is home to two Spring Training complexes -- those of the Red Sox and Twins, two AL teams that are based far, far north of the Sunshine State. Hammond Stadium, the Twins' home, definitely gives Minnesota fans the opportunity to see their team as they rarely can: amid 78 percent humidity.

.@Twins baseball with a lush, tropical forest in the background and 78% humidity -- just as it is meant to be. pic.twitter.com/XH6hhrEOUd

Even the street signs at Hammond Stadium are Twins fans: However, they aren't as passionate as these two, who love any and all Twins players -- present and future: Once inside the stadium, I was thrilled to find out that the Twins put a tremendous effort into finding someone great to toss out the first pitch: None other than the 26th president of the United States, Theodore Roosevelt. 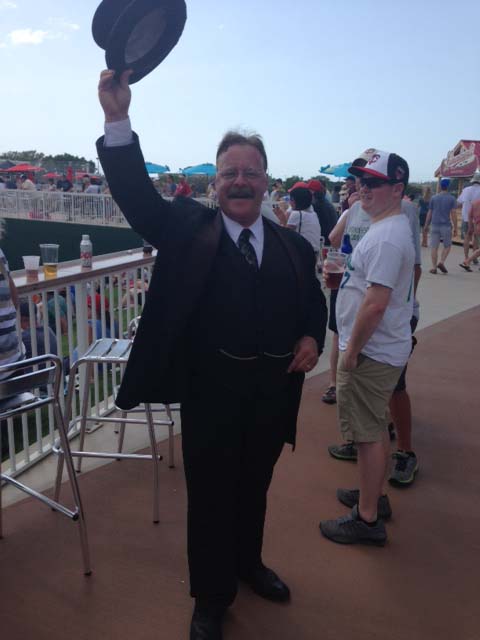 He was as jovial a man as you'll ever meet, and I cherished my moments engaged in conversation with him. It's only Day 1 of the Cut4 Road Trip, and yet I feel as though I've already peaked.

Greetings from the surface of the sun. I flew into Tampa and was visting the Yanks today, but had to make a stop at my hotel in Clearwater, so I can tell you all about the majestic scenery that parallels FL-60 ... and also baseball's biggest rivalry.

If you thought Red Sox/Yankees loyalty is thicker than blood, think again. I met a gentleman who was rocking a homemade Yankees shirt that says "Red Sox Stink!" at the bottom. He's a Sox fan, but his six-year-old niece prefers pinstripes. She made the shirt and gave it to her uncle, who was beaming walking around Steinbrenner Field's concourse wearing enemy colors. Also, I found it surprisingly endearing to be surrounded by people so devout in their fandom. There was the guy in the custom "Boston 617 Strong" Sox jersey and Jeter unis for every color of the rainbow. And an older gentleman with his own twist on The Captain's threads.

I've been on the concourse at @Yankees #SpringTraining for less than 10 minutes and already found this gem: pic.twitter.com/dKUGVg4dpL

I finally arrived in Jupiter, Fla., home to both the Marlins and Cardinals, at around noon. Before I could get my bearings straight and get adjusted to this hot yellow ball of fire shining bright in the sky, I was treated to the Dark Knight himself: And he was facing off against Giancarlo Stanton. Stanton worked the count full and lined out incredibly hard to third base. An inning later, the Marlins right fielder doubled off the wall. These signs I noticed outside Roger Dean Stadium were probably, mostly meant for him:

Kids were seriously waiting outside the stadium with their gloves, blindly hoping to catch one of his foul balls/home runs.

Speaking of kids, well, college kids, the Florida Atlantic University Honors school is located directly across the street from the Spring Training complex. Seems like a pretty cool spot to enroll. Here's a view from one of their art classrooms: With Spring Break, March Madness AND a Spring Training stadium right in your backyard, March would be a tough month for me at FAU. How about you?