From pitching to politics: Five of the most interesting post-baseball player careers

Five of the most interesting post-MLB player careers

There are people who play a single game in MLB, and there are others who play for decades. But no matter how long the MLB playing career, there is one certainty: It ends. So what do professional baseball players do upon retirement?

Some retired players take it easy, reveling in the spoils that come from years of playing professional baseball. Others stay wedded to the game: coaching, managing, or working in the front offices -- whatever they can do to be around baseball. There are a select few, however, that set out on their own.

These are a few of the most interesting ways former MLBers have chosen to spend all that post-diamond free time.

There aren't many MLB players who've gone on to public office, but there are a select few.

After a 17-year career in baseball, Jim Bunning headed for Congress, serving more than two decades split between the House of Representatives and the Senate. A nine-year MLB vet, Wilmer "Vinegar Bend" Mizell spent a few terms as a congressman from North Carolina once he was done on the mound. We can't say for sure that his nickname in Congress was "Baking Soda Straight" but we can't say that it wasn't, either.

A handful of players went into civil service at the local level, including former Royals second baseman Frank White, who was elected to the Jackson County, Mo. legislature last fall. Magglio Ordonez and Bobby Avila both went into politics in their home nations of Venezuela and Mexico, respectively, where the former All-Stars were elected mayor. And we can't forget former right fielder and current mayor Raul Mondesi, who reminds us of the best part about elections: Campaign songs.

There haven't been any former MLB players to win the presidency, but that's only a matter of time, right?

Sometimes, after entertaining thousands of baseball fans throughout an MLB career, the desire to keep performing in front of an audience is too great. Thus, acting.

John Berardino hit 36 home runs as an MLB infielder but he is perhaps best known for his 30-year run on General Hospital as Dr. Steve Hardy. In fact, Berardino is one of the most prolific MLB players-turned-actor in history -- 11 years in the Majors and 111 acting credits on IMDB.

There is one other ballplayer/actor we have to mention here. While he never made the Majors, Scott Patterson spent seven years in the '80s pitching in the Minor Leagues. Yes, that Scott Patterson -- he of Gilmore Girls fame. An average of 5.8 strikeouts per nine innings isn't too shabby for the sole proprietor of Luke's diner in Stars Hollow. And hey, if he ever feels like another career change, we bet he'd make a pretty handy carpenter:

We can barely call Derek Jeter an MLB retiree, but he wasted no time embarking on his next profession: Digital Media Mogul. Shortly after his retirement, Jeter founded The Players' Tribune, a digital enterprise dedicated to giving players across sports their own say in the media. From The Captain to The Editor, right?

One of Jeter's shortstop forefathers also struck out on his own post-MLB: Ozzie Smith. The Wizard dipped his hand into a few different ventures, including a sports bar and grill called, fittingly, Ozzie's, and an investment in a grocery store chain in the St. Louis area. Plus, if he ever wanted to pursue music as a full-time gig, he certainly has the pipes:

And there's Jackie Robinson, who after playing his final MLB game in 1956, served as a vice president for Chock full o'Nuts from 1957-1964 and was an NAACP board member until 1967.

Retiring within a year of each other, Ken Griffey Jr. and Randy Johnson both went into photography once they were out of MLB. Griffey has stuck primarily to sports, working the sidelines for ESPN while snapping photos of, among other things, his son: 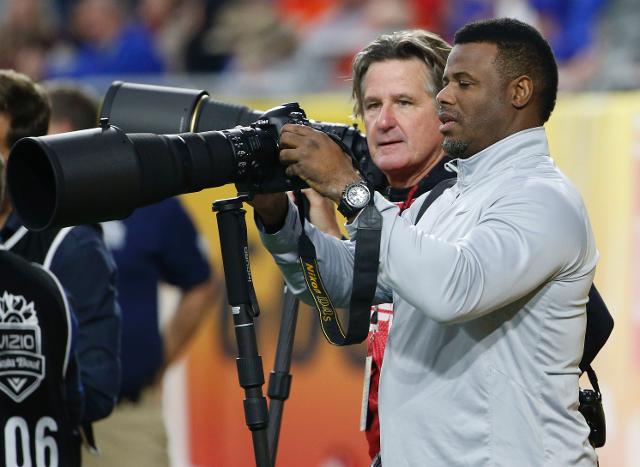 Johnson has been a bit more omnivorous in his photography, filling his portfolio with exotic animals, nu-metal music festivals and drag races.

Everyone knows how Bo Jackson and Deion Sanders played baseball alongside football, which sort of works for our purposes. But we'll definitely count Sanders on this list, since his NFL career went on a few years past his MLB career and was thus technically a post-baseball profession.

And there are a few players who spent time in the Minor Leagues before switching sports, like once-Phillies prospect Ricky Williams and the Super Bowl-bound Russell Wilson.