The Red Sox took Game 1 of the ALDS in a rout, but facing 2012 AL Cy Young Award winner David Price would be a whole 'nother matter.

Could John Lackey, the Boston starter, keep pace with Price? Would Wil Myers bounce back from a Game 1 blunder with aplomb? Was this chair successful in trying to grow a soul patch? 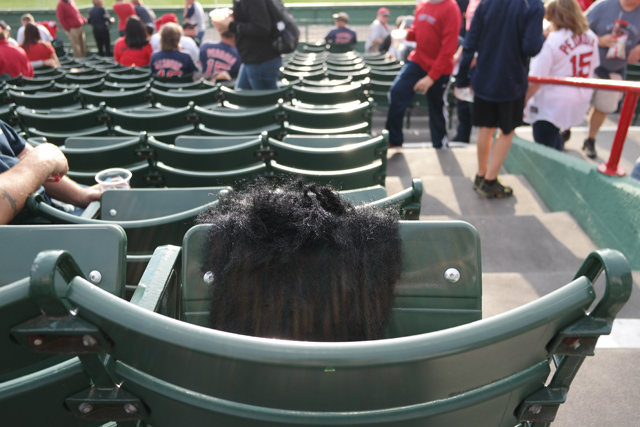 Let's go to the GIFs

In the bottom of the first, Boston second baseman Dustin Pedroia drew first blood when he brought Jacoby Ellsbury home on a sacrifice fly. Not to be outdone, David Ortiz stepped up to the plate, checked his calendar, saw it was October and made the score 2-0:

In the fourth inning, with Boston up 4-1, Red Sox shortstop Stephen Drew grounded a ball into foul territory and a fan tried to grab a souvenir. He failed, spectacularly:

In Game 1, Rays outfielder Wil Myers made an odd error to kick off a five-run fourth inning for Boston, and the Red Sox fans weren't going to let him forget it on Saturday. After a making a routine play in right field, Fenway sardonically cheered for Myers, but the talented rookie laughed it off with a wry smile:

With the score 6-4 in the top of the seventh, the Rays were itching to tie the game up. They'd been hanging with Boston and just needed one big inning to put them on top.

After getting Myers to ground into the first out, Red Sox reliever Craig Breslow plunked first baseman James Loney with a two-seamer, and followed that with a walk to Evan Longoria -- giving the Rays runners at first and second. Unfortunately for Tampa Bay, the big inning was not to be, and second baseman Ben Zobrist grounded into an inning-ending double play:

Here's a fun fact: David Ortiz has never had a multiple home run game in the postseason.

Well, David Ortiz had never had a multiple home run game in the postseason:

That 8th inning solo bomb was Ortiz's 14th postseason home run, and he was pumped:

With that blast, and a dominant 11-pitch performance from closer Koji Uehara, the Red Sox held on to their 7-4 lead and took Game 2 at Fenway. Game 3 at Tropicana Field gets under way on Monday.