What would a Mad Men office softball team look like?

Mad Men is in the midst of its seventh season, depicting the offices of Sterling Cooper & Partners in the final throes of the 1960s. As usual, Don Draper's life is a complete mess, Peggy Olson is trying to prove herself in the male-dominated industry and Roger Sterling, well, he's Roger Sterling. 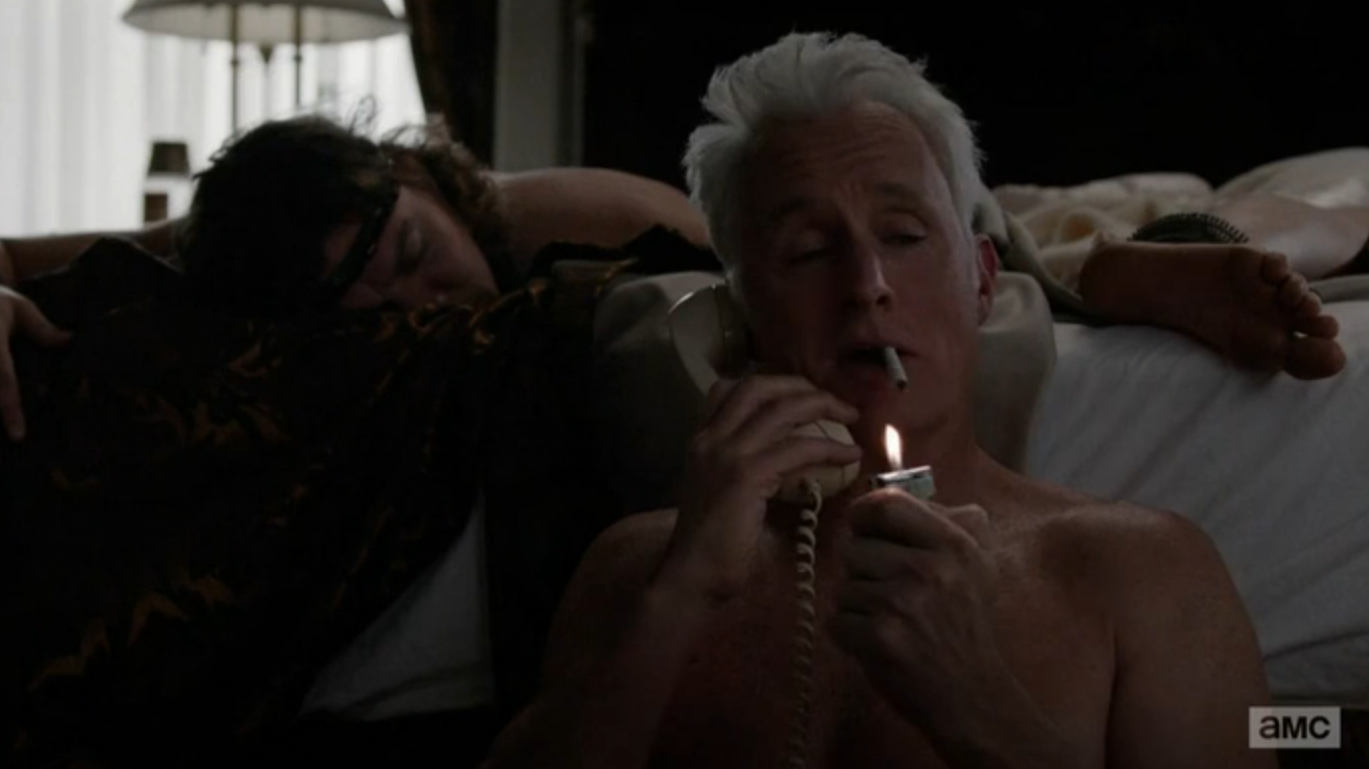 While we've seen plenty of these characters at home, at work and in various hotel rooms since we entered the show's universe in 1960, one aspect of SC&P has been conspicuously absent: the company softball team.

We seek to rectify that today. Until Matthew Weiner weighs in here's a look at the potential lineup: With an eyepatch hindering his depth perception, Cosgrove is limited to duties behind the plate. The veteran accounts man has been the subject of PED rumors, especially after debuting a hyperactive home run celebration, and none of his teammates are quite sure why he insists on wearing a "D. Algonquin" jersey for most games. With catlike reflexes and an almost otherworldly ability to make tough plays look easy, Joan Harris is the true leader of this ballclub. A gritty gamer in a form-fitting uniform with stirrup socks pulled high, Harris simply turns the other cheek on near-constant trash talk from the opposition. Although her contributions to the squad are unquestioned, rumors have circulated about how she first earned her starting spot -- and why her son cheers so loudly when Roger Sterling steps into the batter's box. Benson was handed a starting infield slot after claiming that he'd played shortstop for a previous agency, but scandal ensued when it was revealed he was only that club's batboy. The newcomer eventually won over most of his teammates with insatiable enthusiasm and a habit of supplying enough coffee for the whole squad, but friction remains with double-play partner Pete Campbell. Benson's untraditional game shorts look has also earned him a sizeable fanbase, but they do make sliding much more painful. A true star with the ability to hit for contact and power while producing the best damn day's growth on the field, Draper is also legendary for his pregame motivational speeches. Memories of his "If you don't like the score, change the scoreboard" tirade in the '63 playoffs still bring several teammates to tears.

Unfortunately, Draper rarely arrives before the third inning and is sometimes too hungover to take the field at all. He was also once deemed ineligible for entering himself twice on the lineup card, once as Don Draper then again as Dick Whitman. Slimy and ambitious, Pete Campbell lacks the arm and range necessary to play short but has remained entrenched at the position for several seasons through a combination of backroom dealing and outright blackmail.

That may change soon, however, with Pete spending more of his time investing in West Coast real estate and Bob Benson playing like an emerging star. Campbell has also proven a liability with Robin Ventura-esque performances in several benches-clearing dust-ups, so a midseason trade -- perhaps for old friend Duck Phillips? -- would hardly be a surprise. If nothing else, the SC&P squad will always have his postgame tradition of putting cole slaw directly on a hot dog. Rizzo brings a powerful all-or-nothing approach at the plate but has a liberal view of fielding, which often elicits criticism from fellow outfielder Peggy Olson. Stan's locker room etiquette -- most notably an insistence on parading around in the nude -- has also ruffled a few feathers. The team's newest member, Ted can handle the bat and swipe a bag atop the SC&P lineup. He has strong range in center field, but tension with Peggy in right has led to communication issues on contested popups. With soft hands, incredible range and the ability to deke baserunners with cunning and charm, Peggy Olson is the perfect shortstop. Unfortunately, an era of unchecked misogyny has relegated her to an outfield corner. At the plate, she first learned to avoid prolonged slumps by taking Don's advice to heart ("It will shock you how much this strikeout never happened"). Wacky and witty, there's no spot on the field that suits Sterling better than the mound. Though he's lost a little on his fastball, the veteran hurler can still carve up batters with a variety of breaking pitches and distracting one-liners. Team rules allow The Rog up to three mid-inning martinis to steady his control, but he's barred from toeing the rubber on "Doc Ellis days." Too smart for his own good, Ginsberg is relegated to the traditional stomping grounds of forward-thinking geniuses with questionable facial hair: the bullpen. You know, like a beatnik Craig Breslow. The Casey Stengle-esque Bert Cooper manages the team, though at this point he's more of a figurehead than anything else. He'll often trot out to the umpire, shoes off, to kick up some dirt if there's a disputed play at first base, but is otherwise quite content to sit back, take in the ballgame, and leave a few nuggets of zen wisdom along the way.

The Sterling Cooper & Partners team has plenty of talent, but they lack the size or depth to truly compete with the larger agencies like BBDO and McCann Erickson. The team has also fallen prey to a number of bizarre controversies, from the tragic lawnmower incident that took their groundskeeper's foot to Megan Draper's oddly sensual rendition of the national anthem to the lack of an official scorekeeper since Miss Blankenship's untimely death three seasons ago.

Perhaps with a focused campaign from Draper and a larger role for Olson, the SC&P Nine could overcome these obstacles and produce the cinderella season they've always hoped for. Sadly, after six years in the league, it's far more likely that this group will once again fall victim to the heavy drinking, in-fighting, self-sabotaging ways that have made them famous -- and forever kept softball glory out of reach.