Ranking the Mets fans dressed as Thor for WS Game 3

When Odin uttered those magical words, "Whosoever holds this hammer, if he be worthy, shall possess the power of Thor," I don't think he realized just how many people would turn out to be worthy. Because with the Norse god of pitching, Noah Syndergaard, taking the mound for the Mets in a pivotal Game 3 on Friday, costumed fans turned out en masse -- their long locks and mjolnirs in tow.

Syndergaard proved to be the hero that the team needed, pitching six innings of three-run ball in the victory -- but if the pitcher needed saving, just which of these fans would be most ready to step in and help? We ranked those that arrived in fighting form, going from least Thor to prime Thor.

Is this a Thor? Or just a guy with an enviable head of hair? While he may be hiding in plain sight, a la Donald Blake, we may have to assume he would just make a great extra in "Point Break": We said "Thor" not "Blonde Gallagher" It's OK, we've all made that mistake. Hey, the helmets are fun, but there's a lot more to Thor than just some sweet headgear. Read enough comics and you'll surely come across the classic "Evil person has taken our hero and split their qualities into two separate entities" trope. This one is clearly warrior Thor and beachy vibes Thor. Great together, not as useful apart. Sure, all the pieces are here -- helmet and mjolnir, so could probably help save New York if necessary, but a certain Thor-y je nais se quois is missing. Which is a phrase Thor would never, ever use. And for that, I apologize. Need a good Thor to curl up on the couch with? Someone to help keep you warm during those harsh trips to Jotunheim, the land of the Frost Giants? Have no fear, this Thor is here to help with his protective cape blanket. And here we find an incredible Thor -- one with the mass and grace needed to take down all manner of foes. Only problem: Which team does he claim allegiance to? The Mets? We can only assume. But as the old saying goes, when you assume something ... you don't really know anything at all, do you? In an alternate reality, there is a Thor who, when not Thor-ing, absolutely shreds on the guitar, playing all manner of '80s hair metal hits. This is that Thor. 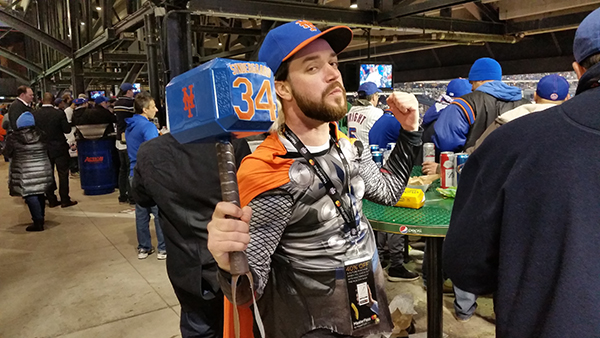 And here we have it, the Thor who bested all opponents in the contest of champions. Here we have a Thor who not only looks the part, but who has also incorporated the Syndergaardian Thor with a Mets orange cape and a personalized Mjolnir. Sure, Odin may not like his precious hammer being covered in more decorations than the back of a 1978 VW bus, but fortunately, we don't have to worry about what he wants.

This is our Thor. And he's our hero.