Pedro stole the show at the Hall of Fame ceremony

Pedro Martinez stole the show at Hall of Fame

With all due respect to the other Hall of Fame inductees on Sunday afternoon, all of whom had amazing careers and more than earned their trip to Cooperstown, they simply do not rank next to Pedro Martinez. For Martinez is not just a pitcher and not just a Hall of Famer, but a man whose life is performance art. Whose every action seems more like something from a tall tale than something a flesh and blood human being would do.

Just take a look at this fond memory of Pedro's career:

"A prankster on his days off from pitching, Martinez more than once staged his personal theatre of the absurd by running naked "rally laps'' in the Sox clubhouse. During one session, his pitching mate, Derek Lowe, interrupted a conversation with reporters.

'I have a hard time talking with this guy running around butt naked,' Lowe said."

So it should be no surprise that Pedro stole the show at the Hall's induction ceremony on Sunday, even if he wasn't running around in the nude.

And wasn't even rocking a headband: 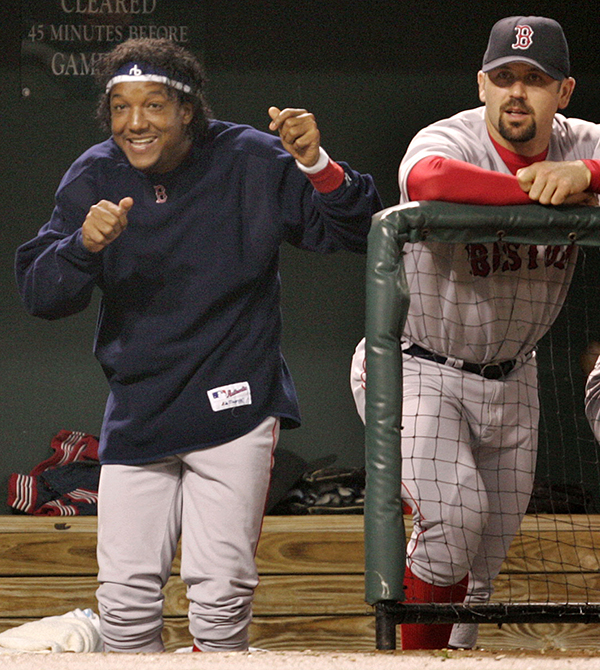 Arriving in a flashy Pete-from-Mad-Men-style blue suit and with a contingent of Dominican fans cheering for him in the crowd, Pedro started dancing before ever taking the podium:

Martinez also switched between English and Spanish, for, as he said at the beginning of his speech:

"Remember I'm Dominican, even though I get away with English pretty well. "

He then thanked the other Hall of Famers, being sure to tell Randy Johnson that he was his "brother from another mother." At the end of the speech, and with Sunday being Father's Day in the Dominican Republic, Pedro brought out the only other Hall of Famer from his home country, Juan Marichal, to help celebrate his induction:

Clear your schedule and watch his entire speech below. Because he's Pedro and he's worth it: