The Red Sox traded Jon Lester and Jonny Gomes (their H's are staying behind in Boston) to the Athletics for two-time home run derby champ Yoenis Cespedes on Thursday and, in doing so, totally rocked the baseball world.

There are about a million reasons why this trade is exciting for the A's, but here are just a few:

Lester's finishing his time in Boston with the ninth most wins in Red Sox history, as well as the fourth most strikeouts, trailing only Roger Clemens, Tim Wakefield and Pedro Martinez.

Need more proof? Here he is striking out 12 batters just a few weeks ago -- something he's done five times in his career:

While Lester like missing bats, sometimes he feels the need to destroy them instead. Seriously -- the things he does to them are often unkind:

3. And he's got some slick defensive moves too

Pitchers are crucial in preventing runs, so it helps when they can lend a hand in the field too. Check out this slick barehanded play from the 2013 World Series against the Cardinals:

Gomes is a valuable outfielder with some nice pop in his bat. But, even more than that, he loves America. This is irrefutable fact. 5. And he comes with his own insane tattoo

Yeah, OK, it's Red Sox themed -- but just imagine the tattoo he'd get if he helped bring a title to Oakland? 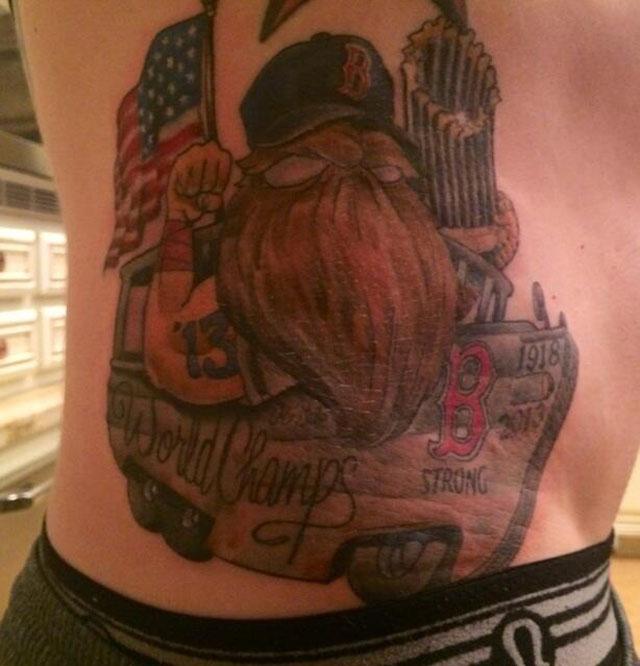 6. In fact, Gomes has many talents

Apparently, including gator hunting and cricket:

7. But sometimes, he doesn't know his own strength

And as a special bonus, the A's also brought in defensive wizard Sam Fuld. Get ready for an awful lot of circus catches: