A review of the weird year that was, from A to Z

Get the scrapbooks out. Fire up the Vitamin C. Yes, sadly, the 2015 season really has come to an end -- you can currently catch prospects tumbling all over the basepaths in the Arizona Fall League, but it won't be long until we reach the barren and baseball-less winter.

To nourish our spirits in preparation for the coming hibernation, it's only fitting to take one long look back at all the ups, downs and in-betweens of 2015. It's been a long and winding road, full of home run boats and triple plays and all kinds of #WeirdBaseball, so throw on your favorite shirsey and let's get to work.

A is for Andrew McCutchen, American Hero

There may in fact be something Andrew McCutchen can't do, but if that thing exists, we certainly haven't found it yet. Consider this brief rundown of his 2015 season: He walked off the Pirates to win after win, he responded to being brushed back by doing some pushups and smacking a double, and he even bent the weather to his whim:

All of which is totally unimpressive compared to the gift he gave a couple of young Pittsburgh fans back in June -- after notching a win over the Padres, Cutch handed over his batting gloves, and melted hearts across the nation:

B is for Bat flips all over the place

Jose Bautista's ALDS-winning toss into the stratosphere was the one we'll be talking about for years to come, but it was just the cherry on top of the bat flip sundae that was 2015. There were pitcher bat flips, bat flips on foul balls, even bat flips on the Wiffle Ball field. And now, with KBO star Byung Ho Park possibly on his way to the Twins, a new bar has been set for next season:

C is for Creative catches

Used to be that a fan could just bring a glove to the ballpark and call it a day. It was a simpler time, a time before anybody who was anybody decided to start catching foul balls in their beer:

That was but the opening salvo in the Great Fan Catch War of 2015. Before it was over, adorable babies were brought to the front lines, and no one's hat was safe.

D is for Dogs in fedoras

This one just about explains itself. There were many dogs who captured our hearts in 2015 -- we are all Reds Dog Who Just Wants A Bite of That Hot Dog -- but when there are canines in novelty headware involved, the only competition is for second place: E is for Eating your weight in ballpark food

Funnel cake cheeseburgers. S'mOreos. Deviled eggs on one gigantic stick of bacon. Your wildest food-related fantasies? No, just your average Major League ballpark. Although, even with that admittedly heightened bar, fried chicken stuck inside of a waffle cone is one of the great wonders of the modern world: 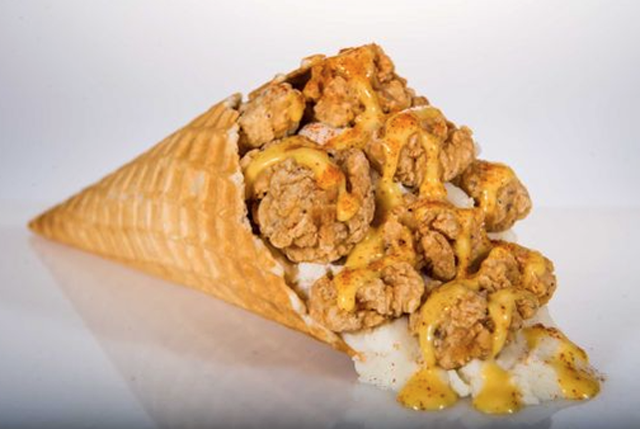 F is for Fashion statements

Since the dawn of the stirrup sock, baseball has carried the banner of high fashion. It was in safe hands in 2015, from Andrew McCutchen and his custom striped socks to the A's rocking the Barry Zito look to honor their former starter.

Alas, with great power comes great responsibility, and the burden of style proves far too much for some. Which is how we wound up with Mark Teixeira sporting the shadow of the ghost of a mustache. G is for Galloping into (and sometimes through) outfield walls

Sure, in the unceasing battle between humans and walls, the walls have traditionally come away victorious. But in 2015, a few intrepid outfielders struck a blow for the little non-concrete guys. Joc Pederson, for example, went full Wil E. Coyote to rob poor Justin Upton and save a win for the Dodgers:

Impressive, sure -- but at this point, if you aren't running directly through walls, we're uninterested.

Eventual champ and hometown hero Todd Frazier did it once to advance to the final ...

... before almost doing it again to win the whole thing. Next year's edition may actually melt the Internet.

I is for Interpretive dance in the batter's box

We would ask if you remember this Japanese high schooler's mid-AB dance routine from earlier this summer, but of course you do, because you've watched it continuously for months now, so we'll just get out of the way:

J is for Jumping all over the field, and sometimes out of it

Traditionally, baseball games have been confined to, well, baseball fields. But nobody told that to the fielders of 2015, who took it upon themselves to play one season-long game of parkour H-O-R-S-E. Back in April, Nolan Arenado turned himself into a human trebuchet and went full-on into the stands to make a catch:

Josh Donaldson saw him a stands-crashing grab and raised him going fully airborne:

His teammate Russell Martin, however, outdid them all by turning entire stadiums into his personal jungle gym.

If 2015 were adapted into a movie -- you know, after the inevitably epic "Prince Fielder v. Third Base" trilogy -- it would probably be something like "There Will Be Strikeouts." Because, whether it was Corey Kluber blowing our minds with 30 strikeouts over two games or Chris Sale just completely going Super Saiyan, fans were treated to a whole lot of whiffs:

L is for Launching Baseballs into Orbit

Though Kyle Schwarber made a pretty serious run at the "most jaw-dropping slugger" title:

This is a pretty good problem to have heading into 2016. Well, unless you're a baseball.

In a season overflowing with great starting pitching, it takes a lot to stand out. Like, say, one of the best starts in baseball history, followed up by a no-hitter just for fun. Oh, what's that? That was how Max Scherzer spent the month of June?

And, as is customary, his reward was sweet, sweet chocolate syrup:

N is for No-hitters galore

Speaking of historical pitching performances! Some highlights: Jake Arrieta's dominance in L.A. inspired the Cubs to throw on their finest pajamas, Mike Fiers made the Astros look like Trade Deadline wizards with a no-no for his new club, and Cole Hamels said goodbye to Philadelphia by blanking the Cubs at Wrigley Field -- well, barely:

O is for Orbit, Lord of the Mascots

A complete documentation of the many adventures of Orbit, Astros mascot and everyone's favorite alien, would require a whole lifetime of GIFs. So, instead, we leave you with his crowning achievement, the standard to which all other mascot shenanigans shall be measured: Orbit doing the "Single Ladies" dance.

There were plenty of starters who dominated on the mound this season. But that's so traditional. Madison Bumgarner set out to show everyone that he was more than just a hurler, and did it by showing no regard for the welfare of his fellow pitcher:

But he wasn't alone: Zack Greinke bat flipped and bashed his way into our hearts, while Tim Hudson went yard at the tender young age of ... 40.

Q is for Questioning the laws of physics

Much as we love to celebrate the fantastic achievements of our favorite Major Leaguers, sometimes the Baseball Gods feel compelled to make clear just who's in charge here -- bending our understanding of the way the world works, just for a laugh. Like, for instance, by plunking an innocent baserunner with a throw, or foiling Pedro Alvarez's best attempts at hitting a groundball:

Humanity would strike back, though -- we have Mike Trout, who might as well be supernatural:

R is for Running the bases with abandon

Baseball is a game of soaring highs and devastating lows -- wins and losses, strikeouts and dingers, going warp speed to score from first on a single and ... uh, this:

But take a lesson from Prince Fielder: You may fall down (repeatedly), but what matters is that you commit.

S is for Standoffs of every sort

"But," you may be asking, "just how many different types of standoff can a baseball player find himself in?" Well, let us count the ways: There were standoffs of the "pregame chicken" variety, two stoic warriors staring each other down, waiting to see which one of them will act like an adult and actually head back to the dugout.

And then there were the standoffs on the basepaths, runner and fielder engaged in an existential struggle for control -- though both sides know how it must end:

It's truly a tradition unlike any other -- primarily because not many traditions involve endangering life and limb. But such is the risk incurred by going anywhere near the head of Adrian Beltre. The reward? Behold:

U is for Underestimating the prowess of Bartolo Colon

Sure, this may not seem like the swing of a hitter who strikes fear in the hearts of pitchers:

But be warned: Take the Almighty Bartolo lightly at your own risk. Because just when he's lulled you into a false sense of security, he'll pull a fast one on you:

No wonder he set a new career high with eight hits this season.

V is for Vendor madness

Hard work. Dedication. Hand-eye coordination. Lemonade. With all due respect to the World Series, the most hotly contested battle of the 2015 season may have been fought in the concourse -- for the honor to be called MLB's Top Vendor. The eventual winner? Derrick "Lemonade Guy" Moore of the Diamondbacks, who's got a unique pitch and some even more unique dance moves:

W is for Wacky walk-off celebrations

Just when you thought walk-offs couldn't get any better, here come the Nationals with bottles upon bottles of chocolate syrup and reporters getting the Gatorade shower. (The Nationals also busted out a bucket of filth, though the less said about that, the better.)

Elvis Andrus and Adrian Beltre took things so seriously they might still be on the field at Globe Life Park, waiting for one of them to blink:

Somehow he managed to survive without his partner in double plays and sliding, Dustin Pedroia.

Y is for the Year of the Rookie

While it may be true that we label every year as the Year of the Rookie, 2015 marked the first time where the crop of first-year players made us look like geniuses for it. There are almost too many to talk about, but we'll try anyway: Kris Bryant spent his time launching baseballs off of his own virtual face, Byron Buxton might actually be the Flash, Kyle Schwarber's home runs have their own zip codes, Joc Pederson three true outcome-d his way into our hearts and Carlos Correa does things no 21-year-old has any right doing. Other than that, though, the kids were really slacking off.

Z is for Zoos at the ballpark

Last we checked, MLB rules did not sanction the use of a jungle cat in official play, so we'll assume that the Rangers were simply hoping for a little motivation/speed-through-osmosis when they brought an actual cheetah into the dugout before a game against the A's:

In far less terrifying animal news, the Cubs invited practically the entire animal kingdom over to Wrigley in September, which undoubtedly carried some sort of Joe Maddon dark magic. Oh, and the A's won this Trade Deadline and all successive Trade Deadlines with the acquisition of a clubhouse chinchilla (!):

But we were also shown the darker side of man's interaction with nature -- and Dodger Stadium is still trying to get the smell out of the dugout:

Thanks for all the memories, 2015. May your winters be warm and free of skunks.