Having already conquered baseball, the Royals took over late-night TV on Wednesday

It's been a fun few days for the Royals, what with winning the World Series, eating lots of celebratory pizza and even attending a parade held in their honor. But Kansas City is not content to merely rest on its perch atop the baseball world. The team had far grander ambitions: namely, to take over late-night television, and the revolution began on Wednesday night.

The operation got underway on the East Coast, as Eric Hosmer and World Series MVP Salvador Perez took the Commissioner's Trophy to "The Tonight Show Starring Jimmy Fallon":

Once they arrived, they decided to hand the hardware over to ... Aziz Ansari?

Oh, and, of course, there was a Jimmy Fallon Gatorade shower: 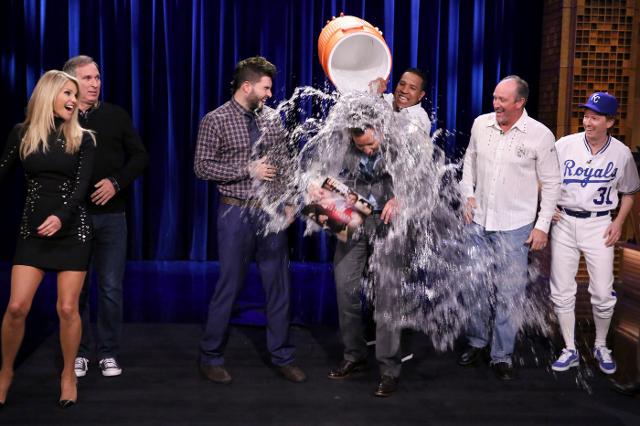 But a battle of this scale cannot be confined to just one theater. And so, like Napoleon before them, Kansas City divided and conquered -- dispatching Jeremy Guthrie, Mike Moustakas, Drew Butera and superfan/ambassador Eric Stonestreet to exact vengeance on "Jimmy Kimmel Live!"

You may recall that Kimmel, a Mets fan, challenged Stonestreet to a World Series wager via the Wheel of Terrible Bets. The stakes? The loser had to jump around in a bounce house for a full minute, while the winner shot at him with a paintball gun.

The Royals won the series in five, and rest assured that Stonestreet brought along some of his friends to help dispense wonderfully juvenile justice.

Tonight I will be collecting on my bet with @jimmykimmel. I will have some KC Royalty to help me provide the welts. @JimmyKimmelLive ������ ��

Even Seth Rogen got in on the action:

Beware, Stephen Colbert, for you may be next.