After secretly watching Child's Play at the age of nine, I was terrified of my toys coming to life and killing me. So when Toy Story came out, I thought of it more as a horror flick instead of the humorous family film that other people did. As I've grown older and come to accept that dolls are rarely possessed, I've been able to appreciate the film for its intelligent storytelling and heartwarming story about friendship.

But when the Giants celebrated Pixar Day on Sunday, all those old fears came rushing back. No, not because John Lasseter was in attendance or for the Pixar-style player introductions:

Rather, it's because of Kirk Rueter. Nicknamed "Woody" for his resemblance to the animated cowboy, the two look so much alike that it's almost enough to convince a full grown adult that his toys could morph into people if not closely watched: 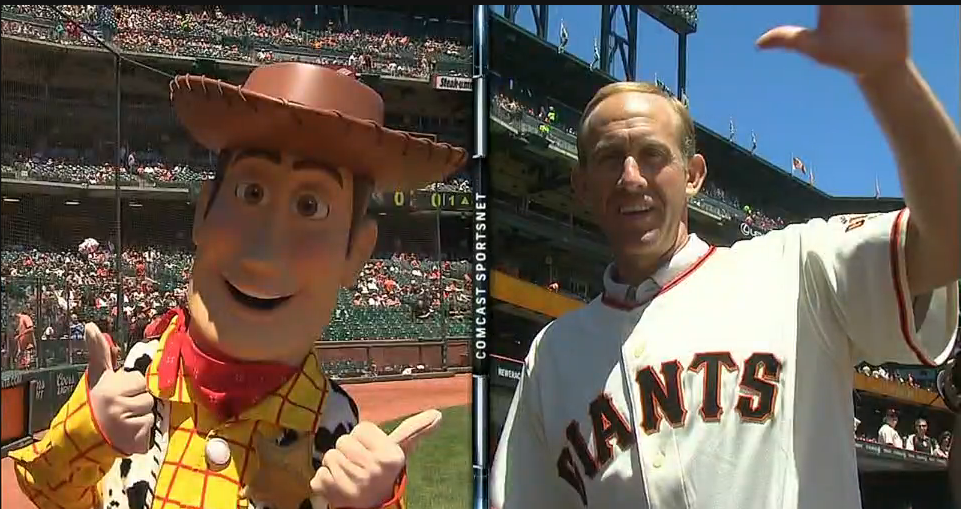 But if Kirk Rueter is Woody, how does the rest of the cast shake out?

Buzz Lightyear is clearly Eric Hinske, down to the square jaw and tuft of hair on his chin: Stinky Pete and Sean Doolittle could swap lives for a day and no one would blink an eye: And Rex's closest match is obviously ... this terrifying Tyrannosaur that threw out the first pitch for the Padres: Now we just have to hope that Disney decides to make a live action Toy Story. Because we've already got the cast.