This Ray used a biomechanist to fix his swing

This story was excerpted from Adam Berry's Rays Beat newsletter. To read the full newsletter, click here. And subscribe to get it regularly in your inbox.

ST. PETERSBURG -- During the Rays’ series in Seattle two weeks ago, Brett Phillips went to the plate eight times and struck out eight times. He struck out again in his first at-bat in Anaheim, giving him nine consecutive strikeouts. The next night, when the Rays were no-hit by Reid Detmers, the affable outfielder’s average dipped to .143 and his OPS to .450, and he had struck out in 45 percent of his plate appearances.

At that point, Phillips knew something had to change. He asked for help.

“The willingness came down to hitting .140 and striking out eight times in a row. You’ve got to make an adjustment,” he said Wednesday morning. “If something is not working, what’s the definition of insanity? Doing the same thing over again and expecting different results. Change something.”

Over the last week, something has changed.

On Monday, Phillips had a career-high-tying three hits, including a double and a home run. On Tuesday, he homered again, the third time in his career he’s gone deep in consecutive games. On Wednesday, he pulled a single to right field. It was only three games, but it was encouraging.

After Monday’s performance, Phillips credited a bunch of people for helping him work his way out of that funk. Hitting coaches Chad Mottola, Dan DeMent and Brady North. Special assistant Denard Span. His wife, Bri. And Jillian Hawkins, who has the title of “applied biomechanist, performance science.”

In short, what Hawkins does is measure and evaluate players’ movements to try to help their performance or, primarily with pitchers, recognize warning signs that could lead to injuries. Working with coaches and Tampa Bay’s training staff, she helps players move more efficiently and get themselves in the best position to succeed.

In this case, she spotted a flaw in Phillips’ swing -- the angle of his hands, specifically -- that was holding him back. When the Rays returned home from their West Coast trip, Phillips sat down with Hawkins to break down three videos. One was from 2014, when Phillips hit .310/.375/.529 as an Astros prospect. The other was from the Seattle series, when he couldn’t hit anything. The last one was from May 10, when Phillips hit a single off (noted two-way rival) Shohei Ohtani.

They went frame by frame through all three videos. They paused the film, went into the batting cage, hit off a tee with the hitting coaches, made adjustments, then returned to the video until they found what they were looking for.

“First time I’ve worked with a biomechanist,” Phillips said, smiling. “Jillian brings a different perspective. Having a different set of eyes has just been so beneficial for myself and getting back to where I need to be.”

When getting into his load position, ready to hit, he was essentially tilting the bat head backward. Most good hitters, Phillips explained, have the bat angled back toward the mound to create a more direct path to the ball. (Imagine Ken Griffey Jr.’s iconic stance and sweet swing as a perfect example.) The way Phillips had been set up to swing, with his barrel dragging, he could only get to strikes down and away. Just think about how the modern game is dominated by high fastballs, then look at where his whiffs were coming. 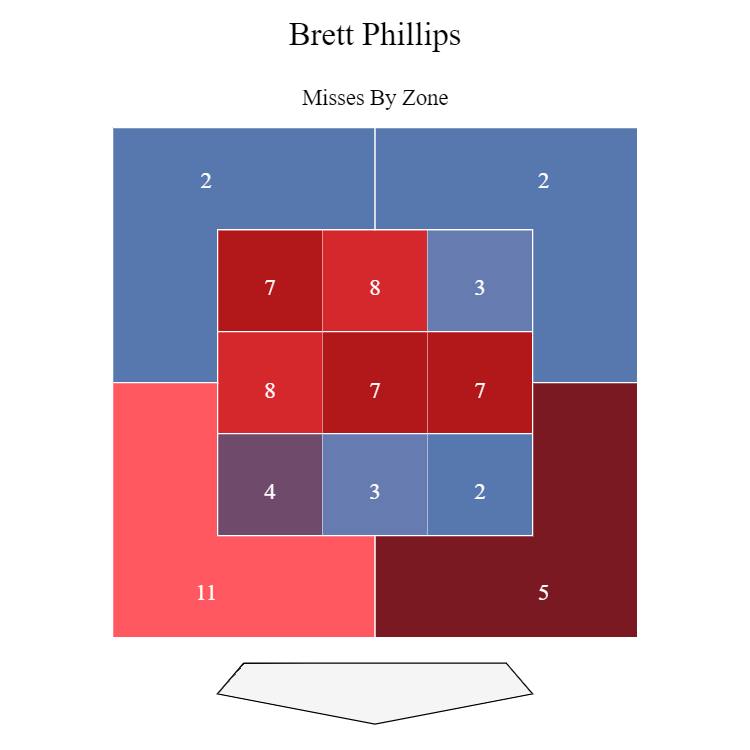 Phillips doesn’t need to be a dominant offensive force to contribute. According to Statcast’s outs above average, he has been the second-best defender in baseball this season -- behind only Detroit’s Jonathan Schoop -- with 6 OAA. But if he can combine that defense with the way he hit in the Tigers series, he’ll be that much more valuable.

“It’s just been a group effort. I feel like they’re in the trenches with me,” he said. “I depend a lot on my defense, but they’re going to need me and my offense, too. For my coaches to be grinding like that and helping me as much as they have and believing in me, it’s helped me a lot.”