My grandma taught me how to love baseball, and maybe she can still teach you, too

My grandmother passed away recently. That’s generally how it is with grandmothers, especially when they are 88 years old and in fading health. But, still -- it seems strange.

Her life was hard. Born in Detroit in 1931, she lost her mother when she was five years old. Her father, who didn’t know how to raise a daughter on his own, gave her to a neighbor down the street. She told us about how she would stand in that front yard and lean over the railing so she could see her home, the one she couldn’t return to. Later, after countless sleepless nights and skipped meals, he took her back. But he would die too, when she was just 12 years old.

She lived near Navin Field-turned-Briggs Stadium (later it became the famous Tiger Stadium) and she would spend her time at the ballpark. Her uncle worked as a plumber at the stadium, so she could often get in for free. She befriended the players and would even go bowling with them as a teenager. When the great slugger Hank Greenberg was sent to the Pirates in 1947, she wrote to tell him how much he would be missed in Detroit. He answered her postcard thanking her for her thoughts, relating how much he would miss the city. He added his autograph.

Decades later, and after years of telling me that the autograph would come into my possession when I was old enough, she gave it to me. I kept it pinned to the mirror in my bedroom but, unfortunately, the autograph was lost after I moved back to the East Coast from Los Angeles. We noticed it right after Christmas – so, with wrapping paper still littering the ground around the tree, we broke the news to her. You have never seen an old woman so upset. She cried and wailed, having lost this crucial piece of her past.

In the end, we fixed the situation as best we could by buying a new Hank Greenberg autograph on eBay. I perhaps like this one more than the original postcard – imbued in it is both my grandmother’s Hank Greenberg story and now my own. Naturally, she announced a belief that perfectly encapsulates who she was: “I feel strong that it will be found and soon.” Sadly, it hasn’t yet.

As an adult, she mostly lived in Cincinnati. It was there she found the love of her life (except for maybe her children, grandchildren and tiny dogs … maybe): The Cincinnati Reds. She lived there during the height of the Big Red Machine, when the Reds dominated Major League Baseball and collected World Series trophies like children collect rocks and buttons.

She watched every night. She read the newspaper the next day. “You know what I just found?” she’d tell me on the phone, years later. “The sports section from the 1990 World Series. I’ll send it to you in the morning.” I probably have the largest collection of Cincinnati Enquirers for someone who has never lived in or near the city for a day in their life.

Even as she got older and the rest of her life changed -- friends passing away, her mobility limited and no longer able to drive her own car -- she still followed the Reds. She loved Joey Votto. “What a cutie,” she’d say, smiling and winking at me, when he walked to the plate. If he was in a slump, she’d turn and say “I’m worried about my Votto. He looks depressed.”

She wore her “Joey to the World” sweatshirt in all seasons -- though, she loved Christmas more than anything. So, when the Reds’ season would end, from November until the new year, she would mainline Christmas movies. At least then the sweatshirt was seasonally appropriate.

Four years ago, she no longer could live on her own and it was time for her to move in with my parents. I flew out with my mother to help pack her apartment. While we were there, we took her to one final Reds game. It was over Easter weekend, so the weather was cold for normal people. But my grandmother, who would walk out on a summer day in a parka, gloves and winter hat, was absolutely frozen. We covered her as well as we could -- which wasn’t nearly good enough -- but between shivers and multiple hot chocolates, she clapped and cheered and sang. And, like all Cincinnatians – both real and honorary -- we ate cheese coneys.

Before she left Cincinnati for the last time to move in with my parents, I flew out to take her to one more Reds game. Even though she was freezing the whole time, she still sang and cheered and we ate cheese coneys and it was great. pic.twitter.com/TqiY66p9hQ

We took her to the team store and draped her in goods. We bought everything we could get our hands on. We wanted her last game to be a truly magical trip, like a kid walking into a candy store and being allowed to fill their pockets. (I also need to apologize to the Reds -- we paid for most of the merchandise, but a few pins slipped down in her wheelchair, and we didn’t find them until later.) 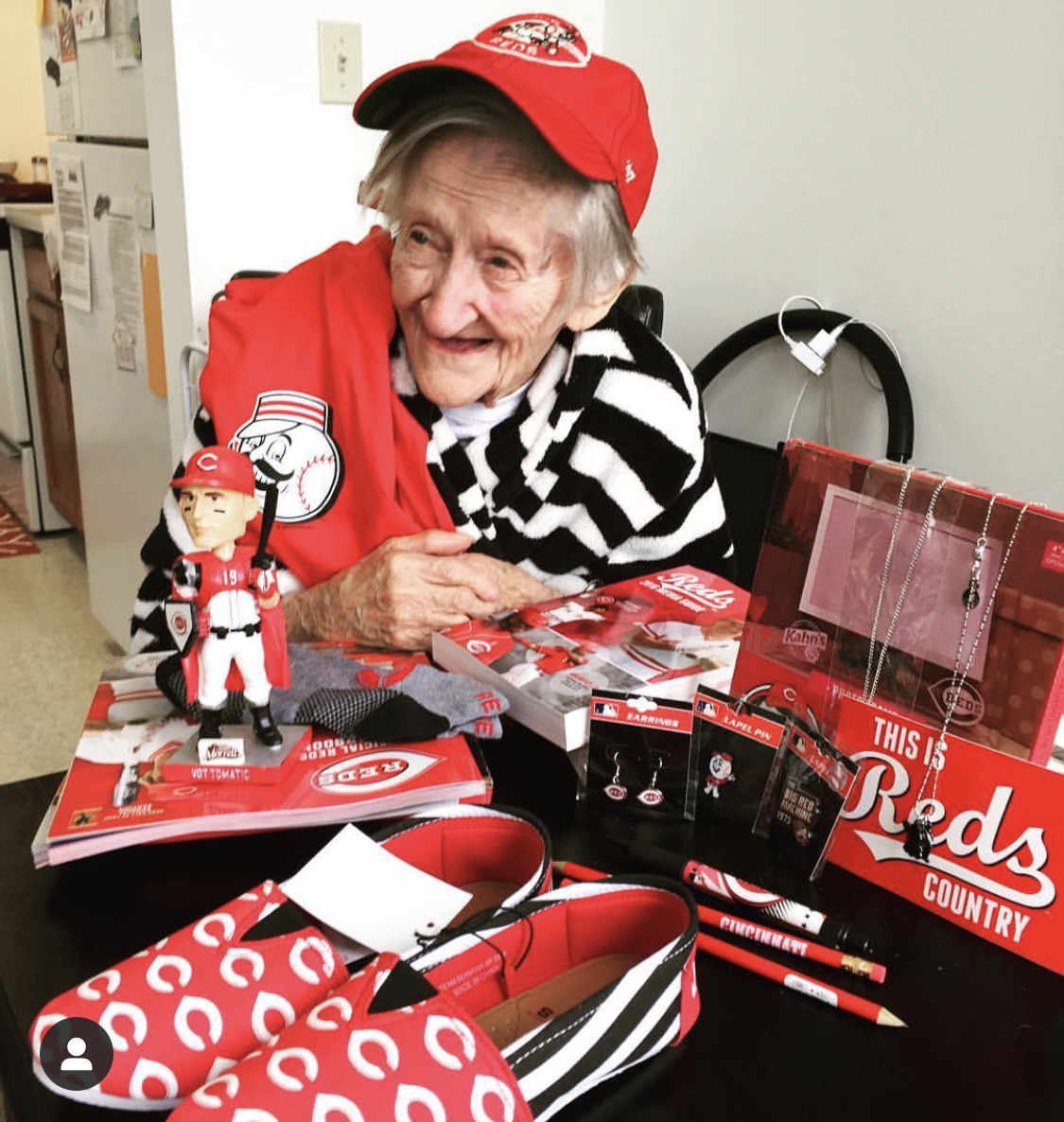 Her memory faded quickly after moving in with my parents, though she always remembered a few things. Namely: Her love of Milky Ways, the names of her children, grandchildren, great-grandchildren and their spouses and significant others, and, of course, to ask for the Reds to be put on at 7:05 p.m. every night.

Our conversations became simpler. When I would ask her what the score was, she’d reply, “I don’t know.” But she liked the games on, she liked the sounds of the action and the soothing voices of the broadcasters. When the Reds would hit a home run, she’d clap her hands and smile -- even if she wouldn’t necessarily remember who hit it or even that it had been hit at all by the time they stepped on home plate.

My grandmother is gone now and there’s a gap in my life. I’ll miss sitting with her in her stifling, 80-something-degree room and sweating while watching baseball together. I’ll miss laughing with her and using silly voices and telling stupid stories.

Fortunately, baseball is not gone. When April rolls around and the clock ticks to 7, I’ll turn on the Reds game. And I’ll know she would be watching, too.

Up Next
What do you get when you combine a block party and a baseball league?
Follow Cut4
Related
Inside Texas sandlot baseball
Joey Votto wears shirt about his alleged decline
Ranking the weirdest regional hot dogs