The Mets have had a fascinating overlap this July with the Nathan's Hot Dog Eating Contest. First, Joey Chestnut stopped by their clubhouse at Citi Field prior to throwing an odd-but-appropriate first pitch. Now, the shoe is on the other foot, as a Met stopped by the contest itself to serve as a celebrity judge on July 4.

Jeff McNeil was named to his first career All-Star team on June 30. Turns out that he was also named to the New York City bench -- the Nathan's bench anyway:

Excited to be a judge in the @originalnathans Hot Dog 🌭 Eating Contest on July 4th! Thanks @joey.chestnut for stopping by the game this past weekend!

McNeil was indeed on hand at Coney Island for the hot dog-eating festivities. Some might consider it a challenge to take on a new task like judging how many hot dogs are being guzzled down in front of you, but McNeil isn't a utility man extraordinaire for nothing. 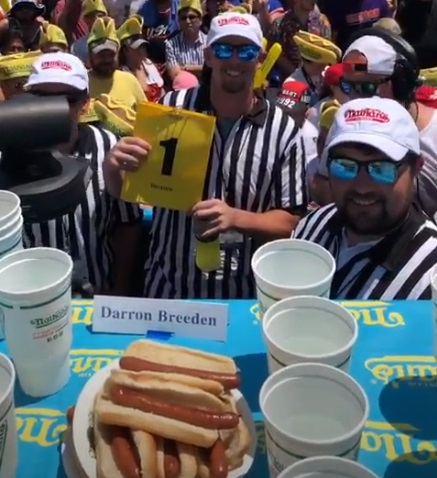 The batting eye that has helped McNeil lead the National League in hitting in the first half is clearly coming in handy.

When the smoke had cleared, McNeil's pal, Chestnut, emerged victorious with his 12th Hot Dog Eating Contest title. We're all just witnesses to a true dynasty.

A #July4th for the record books. @JeffMcNeil805 was a judge at the @originalnathans Hot Dog Eating Contest. Congrats to @joeyjaws for taking home the 🥇. pic.twitter.com/Ent33kOCtG

Up Next
What do you get when you combine a block party and a baseball league?
Follow Cut4
Related
Joey Chestnut throws first pitch, eats hot dog
Jeff McNeil and Pete Alonso are best friends
Pete Alonso gets polar bear tribute in Mets dugout