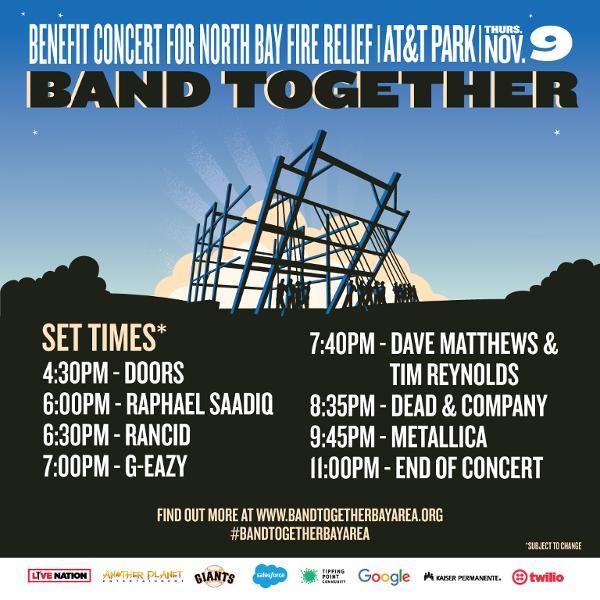 Doors open at 4:30 and guests are encouraged to be in their seats no later than 5:45 p.m. for an interfaith blessing from members of the San Francisco Interfaith Council, followed by a video tribute to the resilience and strength of the North Bay communities impacted by the firestorm.

The five-hour show will recognize first responders and local heroes, honoring the more than 40 victims who lost their lives in the firestorm. Raphael Saadiq will kick off the musical portion of the evening at 6 p.m., followed by Rancid at 6:30 p.m., G-Eazy at 7 p.m., Dave Matthews & Tim Reynolds at 7:40 p.m., Dead & Company at 8:35 p.m. and culminating with a performance at 9:45 p.m. by Metallica. In between

each set, local celebrities and athletes, including AT&T Park public address announcer Renel Brooks Moon, 49ers legend Joe Montana, San Francisco Giants legends Barry Bonds and Buster Posey and Olympic gold medalist Natalie Coughlin will honor heroes who rose to the occasion during the tragic fires. The program will also include a moment of remembrance for the victims of the the firestorm.

Limited tickets are still available for the nearly sold out show. 100% of ticket sales from the concert will go to an emergency relief fund established by Tipping Point Community. Tipping Point will direct funds to North Bay community foundations, service providers and government partners supporting the low-income communities hit hardest by the fires. The best seats in the house will be donated to first

responders, volunteers and families impacted by the firestorm for an evening of solidarity, respite and hope.

Organizers are encouraging guests to take the following ridesharing or public transit lines to the show:

Parking is located in Lot A, Lot C, Pier 48 and Pier 30/32. Parking lots open at 3 p.m. and cost is $38 per car. Secure bike parking is also available on the Portwalk between the viewing portals and the Dignity Health Center, and is operated by the San Francisco Bicycle Coalition.

For more information, to purchase tickets or make a donation, visit bandtogetherbayarea.org .