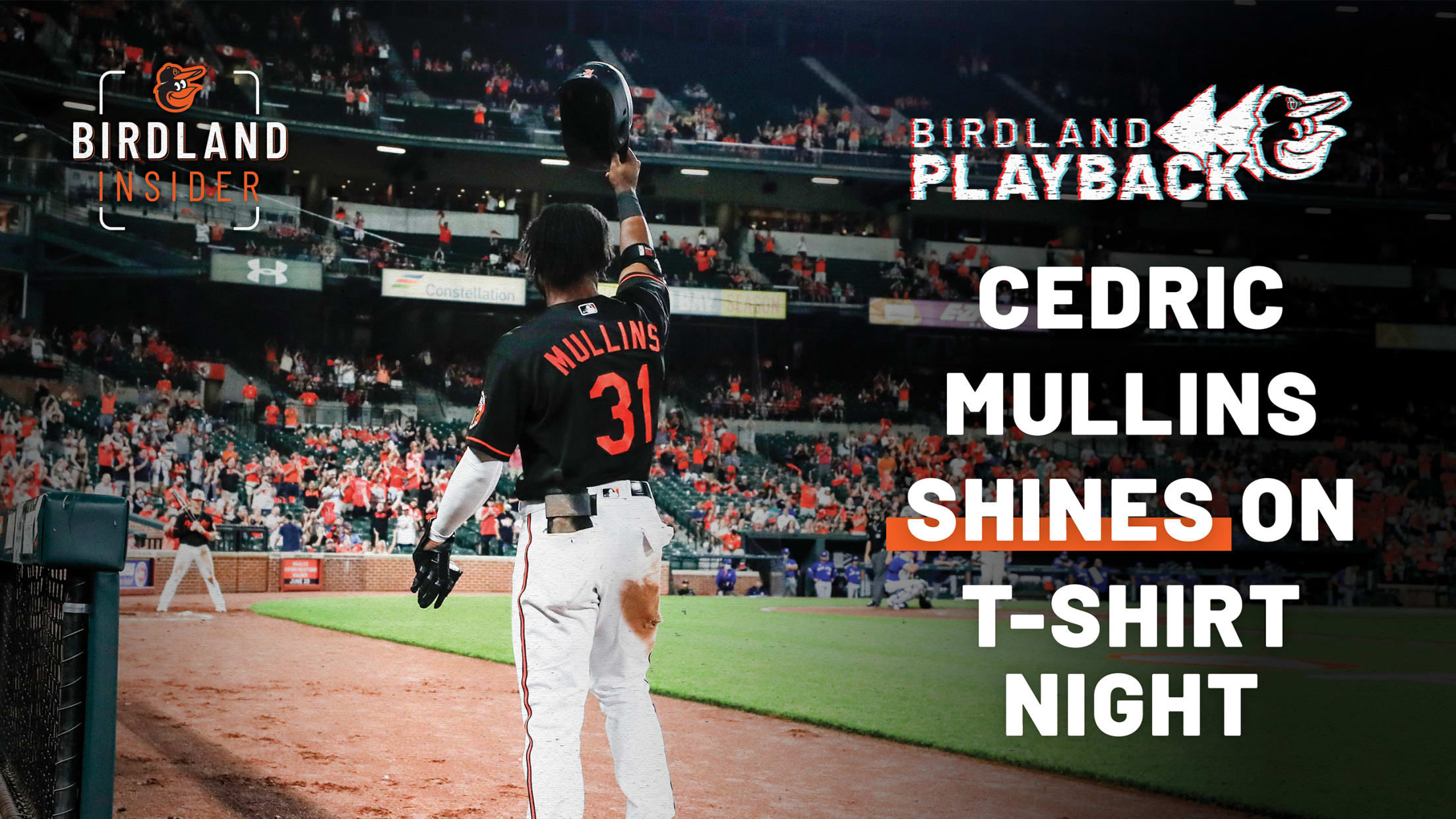 Most Orioles fans know that the 2021 season was not only the best season of Cedric Mullins’ career, but one of the most dominant performances in baseball this year. His accolades included his first-ever All-Star appearance, the club’s first season of 30 homers and 30 stolen bases in franchise history, and being named the unanimous winner of the Most Valuable Oriole award.

But one of his most memorable moments of the 2021 campaign came during a summer night in Baltimore on June 18 against the Toronto Blue Jays.

At the time, Mullins had already been enjoying an impressive first half, leading the team in several offensive categories and earning himself early All-Star consideration. As he continued his surge, it was becoming clear this was more than just a lucky start to the year.

Following Mullins’ successful first two months to begin the season, the Orioles announced in late May that they would host their first T-shirt night of the summer on June 18, featuring none other than the 5-foot-8 outfielder taking the baseball world by storm.

In the third installment of Birdland Playback, Mullins recalls his performance and the incredible crowd support during his T-shirt night at Oriole Park.

After “Cedric Mullins T-Shirt Night” had been announced to the public, Mullins’ teammates were the first to don the shirts and show their support for the All-Star hopeful. Orioles players wore their ‘31’ shirts around the clubhouse and during batting practice for days leading up to the celebratory night – most of whom continued to do so long after the special evening had passed.

On the night of June 18, the Orioles were opening a six-game homestand after concluding a road-trip that saw them drop eight-straight games. Although the team was struggling, Mullins was enjoying an exceptional month of June, where he was batting .400 (20-for-50) in 13 games so far.

As the sea of orange was still taking their seats, Mullins immediately showcased the power that Orioles fans had been witnessing all season long.

On the first pitch thrown by the future 2021 AL Cy Young winner Robbie Ray, Mullins belted a lead off home run to put the crowd on their feet and give the Orioles an early 1-0 lead.

The two teams would battle it out for most of the night. The Orioles held their 1-0 lead until Lourdes Gurriel, Jr. put the Blue Jays on the board and tied the game with a solo shot in the top of the fifth inning.

In the bottom half of the frame, Mullins recorded his second hit of the evening with a single to center field. Two batters later, Austin Hays gave the Orioles the lead again, 2-1, with a single of his own. It would remain a tight one-run game until the Orioles took a commanding lead in the eighth inning, thanks to none other than Mullins himself.

After a pair of RBI hits by Freddy Galvis and Maikel Franco to give Baltimore a padded 4-1 lead, Mullins put the final nail on Toronto’s coffin – a play that resulted in one of the best moments at Oriole Park this season.

With two runners on base and two outs in the inning, Mullins sent a ball flying to deep right field for his 11th home run of the season and his second dinger of the night. The homer put the Orioles ahead 7-1, which would be the final score.

After rounding the bases and navigating through a swarm of high-fives in the Orioles dugout, Mullins realized the Birdland faithful were still clamoring for more.

“I just felt the energy of the crowd,” Mullins recalled. “I was at the edge of the dugout already putting my stuff down and that’s when it hit me, ‘Oh, they want the curtain call.’”

As he emerged to the standing ovation, his teammates cheered right along with the roar of the crowd.

“It was just awesome,” Mullins continued. “My teammates were excited to see that themselves. How that night unfolded, it’s hard to replicate. That environment -- the fans were awesome and really came out to support that day.”

“It was a goosebumps moment.”

Mullins would go on to earn that much-deserved All-Star nomination as he put together one of the best offensive seasons in the American League. In November, he received his first-career Silver Slugger award, the top offensive recognition in Major League Baseball given to the season’s best players at each position, selected in a vote by MLB coaches and managers in their respective leagues.

While there were several exciting moments in 2021, it was an O’s win in the middle of June that provided one of the most electric nights at Camden Yards this season.

“That’s the most energy I’ve seen in the ballpark in my three years here,” said manager Brandon Hyde after the game. “I felt like the guys really fed off that. The crowd was unbelievable. And for the fans to recognize Cedric and his great night like that, it was a super cool moment.”