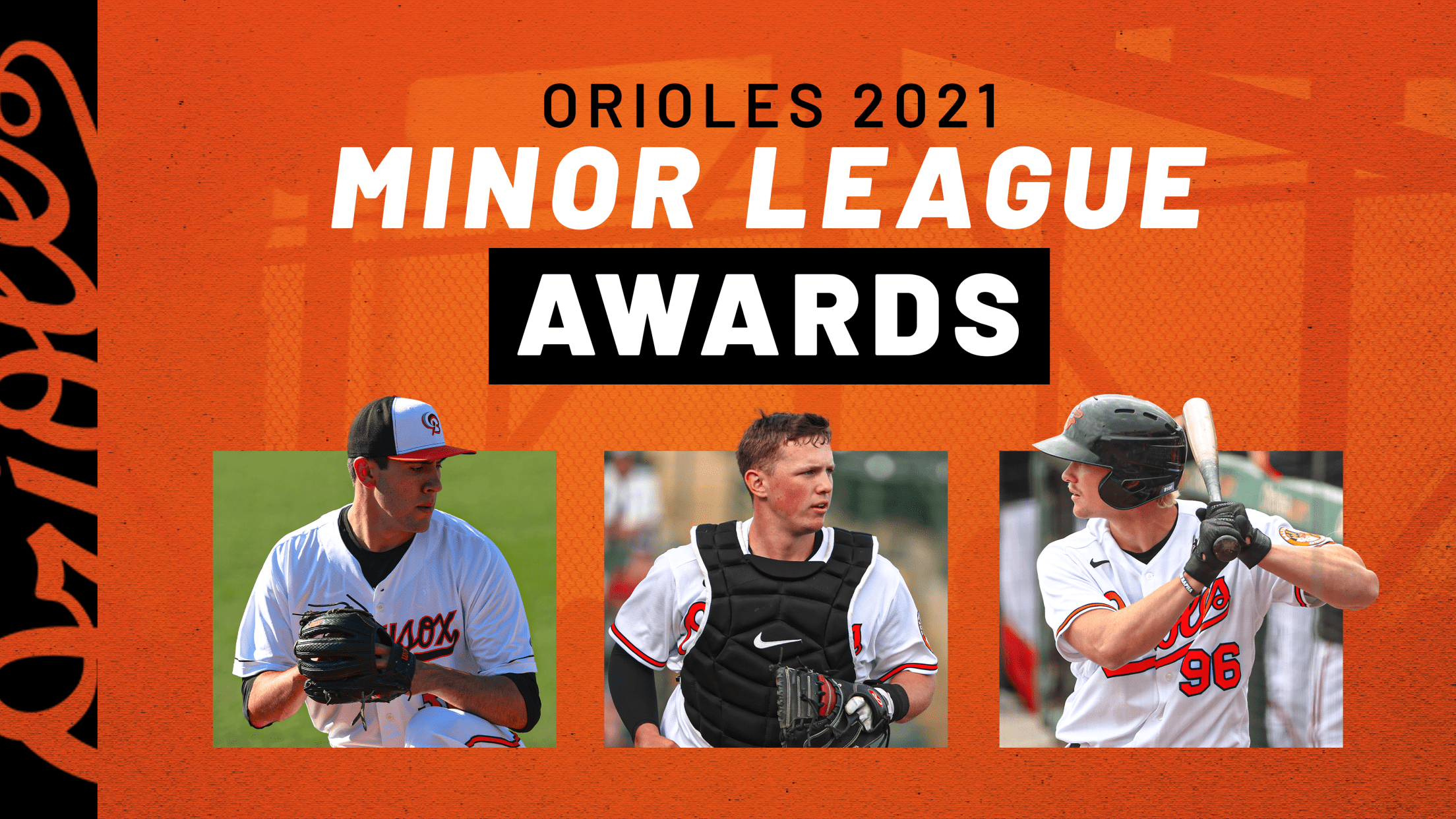 On Sunday, the Orioles announced the winners of their player development and scouting awards for 2021, including catcher Adley Rutschman and outfielder Kyle Stowers as the club’s top minor league players.

The award winners were honored in an on-field ceremony prior to Tuesday night’s game against the Boston Red Sox, with awards presented by Director of Player Development Matt Blood, Director of Minor League Operations Kent Qualls, and Supervisor of Domestic Scouting Operations Brad Ciolek.

After much of their training was done out of the spotlight in 2020 – at the Alternate Training Site in Bowie and during Fall Instructional League workouts at Ed Smith Stadium in Sarasota – the presentation of the Orioles’ 2021 minor league awards capped a successful minor league season, which saw baseball return to communities throughout Birdland and top prospects continue their climb to Camden Yards. The stellar performances of the winners are made even more impressive considering the Orioles have the best farm system in baseball according to MLB Pipeline, and their No. 2 ranking by Baseball America is Baltimore’s highest in the publication's 38 years of ranking farm systems.

Rutschman, 23, has been named Orioles Brooks Robinson Minor League Co-Player of the Year. The backstop is the No. 1 prospect in all of baseball according to Baseball America and MLB Pipeline. He began the year with Double-A Bowie before earning a promotion to Triple-A Norfolk on August 10. In 38 games with the Tides through September 28, Rutschman is batting .319/.415/.522 (44-for-138) with nine doubles, two triples, five home runs, 22 runs scored, 20 RBI, and 22 walks.

“It’s really special (to share this award with a teammate)," said Rutschman. "Me and Kyle are super close and having the opportunity to play with him this year again for the first time since 2019, it’s a blessing and we’ve had a lot of fun this year. It's great to be able to share this with him.”

Stowers, 23, has been named Orioles Brooks Robinson Minor League Co-Player of the Year. The left-handed slugger burst onto the scene in 2021, appearing in 120 games across three levels of the Orioles minor league system. He began the season with High-A Aberdeen before being promoted to Double-A Bowie on June 22 and Triple-A Norfolk on September 7. As of September 28, Stowers leads all Orioles minor leaguers with 27 home runs, 51 extra-base hits, and 229 total bases. He notched two multi-homer games for the Baysox this season and registered a career-high four RBI on September 3 prior to his promotion to Norfolk.

“It means a lot (getting this honor)," shared Stowers. "Obviously any validation of the work you put in is super special and even to win it alongside Adley, who’s one of my best friends and someone I just love playing the game with and love being around, I think that makes it even more special.”

Rodriguez, 21, has been named the Jim Palmer Minor League Pitcher of the Year for the second consecutive season. The right-hander helped lead Double-A Bowie to the Double-A Northeast Championship following his promotion on June 1. Prior to his promotion, he was named the Orioles Minor League Pitcher of the Month and High-A East Pitcher of the Month for May after going 3-0 with a 1.54 ERA (4 ER/23.1 IP), five walks, 40 strikeouts, and a 0.69 WHIP in five starts for High-A Aberdeen. He struck out at least eight batters in three of the five outings, including 11 punchouts through 5.0 innings on May 15. Rodriguez surpassed that mark with a career-high 12 strikeouts through 5.0 innings on July 18 while with Double-A Bowie. He was named High-A East Pitcher of the Week on May 23 after tossing 6.0 scoreless innings with one hit and eight strikeouts in the IronBirds’ victory on May 21. He went 6-1 in 18 regular season starts for the Baysox, posting a 2.60 ERA (23 ER/79.2 IP), with 22 walks against 121 strikeouts. He had 30 more strikeouts than the next-closest pitcher on the club, and his innings pitched also led the team. His 121 strikeouts led all Double-A Northeast hurlers and ranked tied for fourth in all of Double-A baseball.

He is rated as the No. 2 prospect in the Orioles system by Baseball America and MLB Pipeline, as well as the No. 1 pitching prospect in baseball. He is ranked as the game’s No. 7 prospect by Baseball America and No. 8 by MLB Pipeline. Rodriguez was selected by the Orioles in the first round (No. 11 overall) of the 2018 First-Year Player Draft out of Central Heights (Texas) High School.

“I was extremely excited (to get this award)," said Rodriguez. "Obviously anything with Jim Palmer’s name on it is a pretty high achievement and being able to share that award with Mike Baumann in 2019 was pretty special, especially after my first full season, and this year again, getting the award alone, that’s just really special to me.”

Bowie Manager Buck Britton has been named the winner of the Cal Ripken, Sr. Player Development Award, named for the late Orioles coach and manager who is widely regarded as the architect of “The Oriole Way.” Each year, a minor league staff member who exemplifies Ripken’s qualities as an instructor is recognized with the award. Britton is in his fourth season as a coach in the Orioles system, and second as Bowie’s manager, after a nine-year professional career in the minor leagues from 2008-16, predominantly in the Orioles system. The Baysox finished the regular season with a record of 73-47, earning a trip to the 2021 Double-A Northeast Championship. Due to the cancellation of the 2020 Minor League season because of the COVID-19 pandemic, it is Britton’s second-straight season leading his club to the finals, after playing in the 2019 Eastern League Championship Series.

“It’s incredible, honestly. I’m just here to represent what my staff was able to pull off,” said Britton. “I had a really, really talented staff in Bowie, and a lot of good players. They say the key to being a good coach is to hang around with the good players so I got to hang around with a lot of them this year. But to anything that has Ripken’s name on it, Sr.’s name on it, is a huge honor, and I’m super humbled and appreciative of it.”

Area scout Brandon Verley was named the Jim Russo Scout of the Year Award, named in honor of the man who spent 33 years in various scouting capacities with the Orioles beginning with their move from St. Louis in 1954. Verley has been a key member of the Orioles’ scouting operations for more than a decade, covering the Pacific Northwest – including Idaho, Montana, Oregon, and Washington – from 2010 to 2019. Since 2020, Verley has covered south Florida and Puerto Rico, recommending players for the First-Year Player Draft.

With the top farm system in baseball, the 2022 season will certainly feature more breakout performers in the Orioles’ minor league ranks, and most importantly, promotions to the Major Leagues as the club’s top prospects continue their ascent to Camden Yards.