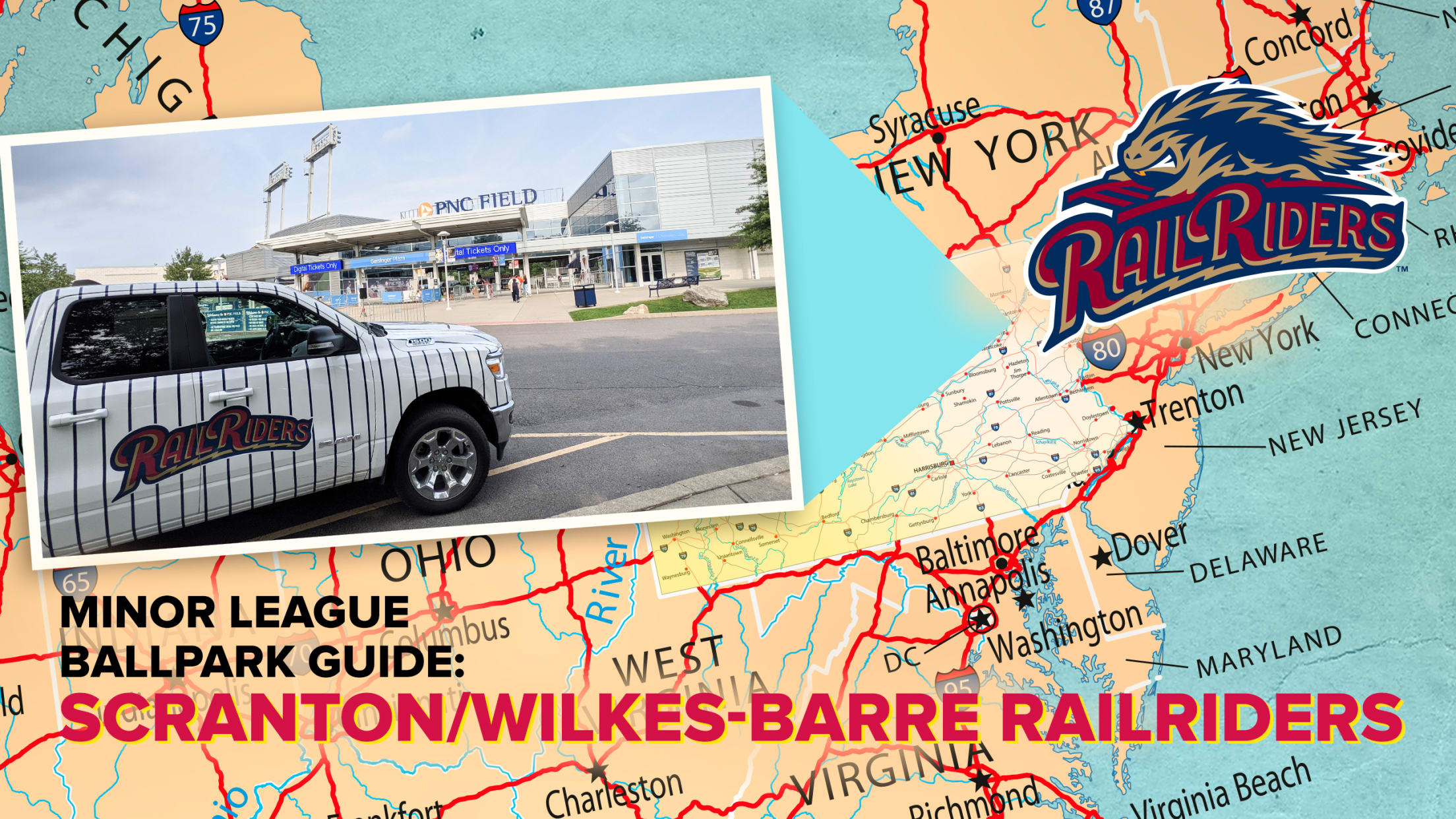 Welcome to PNC Field in Moosic, Pa., where they couldn’t move mountains to build the ballpark, so they built right up to them. Take a trolley to the game or stay in a hotel overlooking the field, then escape the sun beneath trees on the right-field berm and root for your favorite Yankees legend in the mascot race. 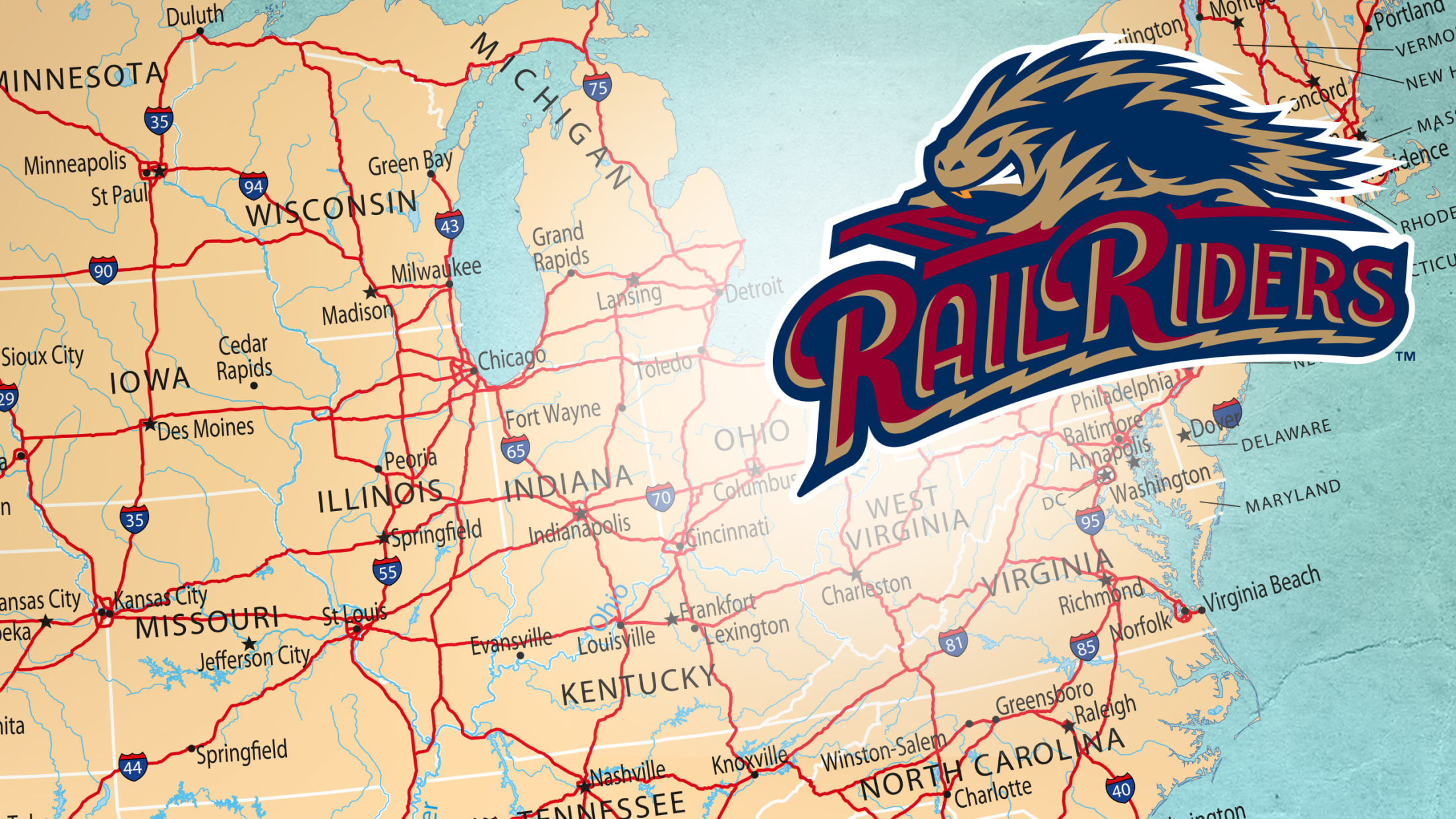 The Scranton/Wilkes-Barre region had Minor League baseball as early as 1886, when each city had a team. Imagine the rivalry between the Scranton Coal Heavers and the Wilkes-Barre Coal Barons in the 1895 Eastern League! But after the demise of the Scranton Miners in 1953 and the Wilkes-Barre Barons in ’54, Lackawanna County was without organized baseball until 1989, when the Triple-A Scranton/Wilkes-Barre Red Barons moved down from Maine as a Phillies affiliate to play in what was then Lackawanna County Stadium. The parent club switched to the Yankees in 2007, and in 2013, a renovation – you might call it a rebuilding – of everything except the layout of the field and the main seating bowl produced a brand-new ballpark. 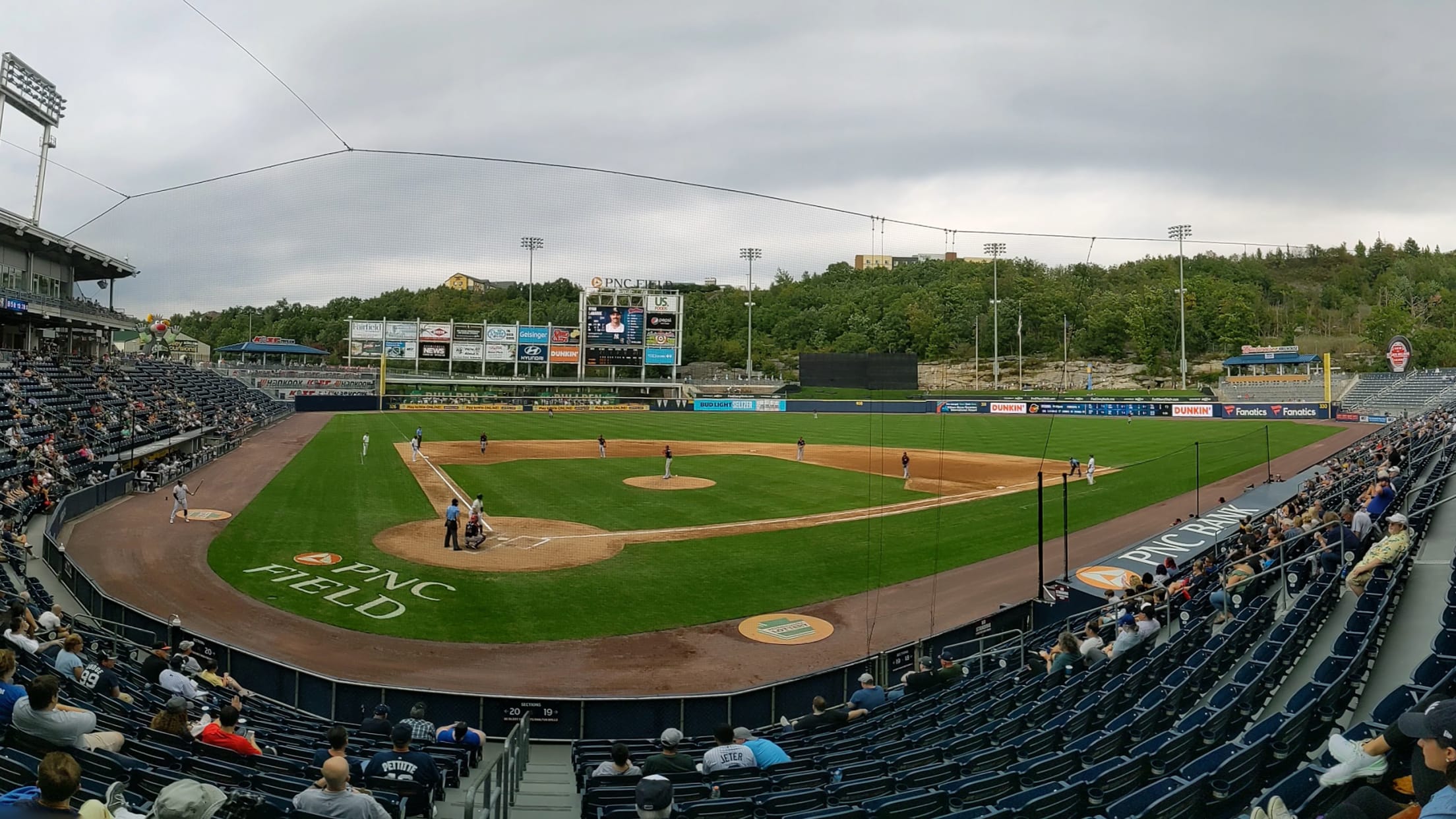 Nestled in the Wyoming Valley, Scranton is Pennsylvania’s sixth-largest city and the Lackawanna County seat. Two of the city’s nicknames led to the RailRiders moniker the team adopted in 2013. When electric lights were first turned on in 1880, Scranton became known as “The Electric City” – a sobriquet strengthened six years later when America’s first streetcars to run only on electricity began traversing the avenues. The other nickname, Steamtown, stems from five railroads that served the city, carrying passengers and coal along the Delaware, Lackawanna and Western; the Delaware and Hudson; and the Erie railroads. Trains are a pretty big deal in the area.

And who doesn’t know Scranton as the home of a branch of the Dunder Mifflin Paper Company from NBC’s “The Office?” The team recognizes Michael Scott and Co. with a theme night each season. 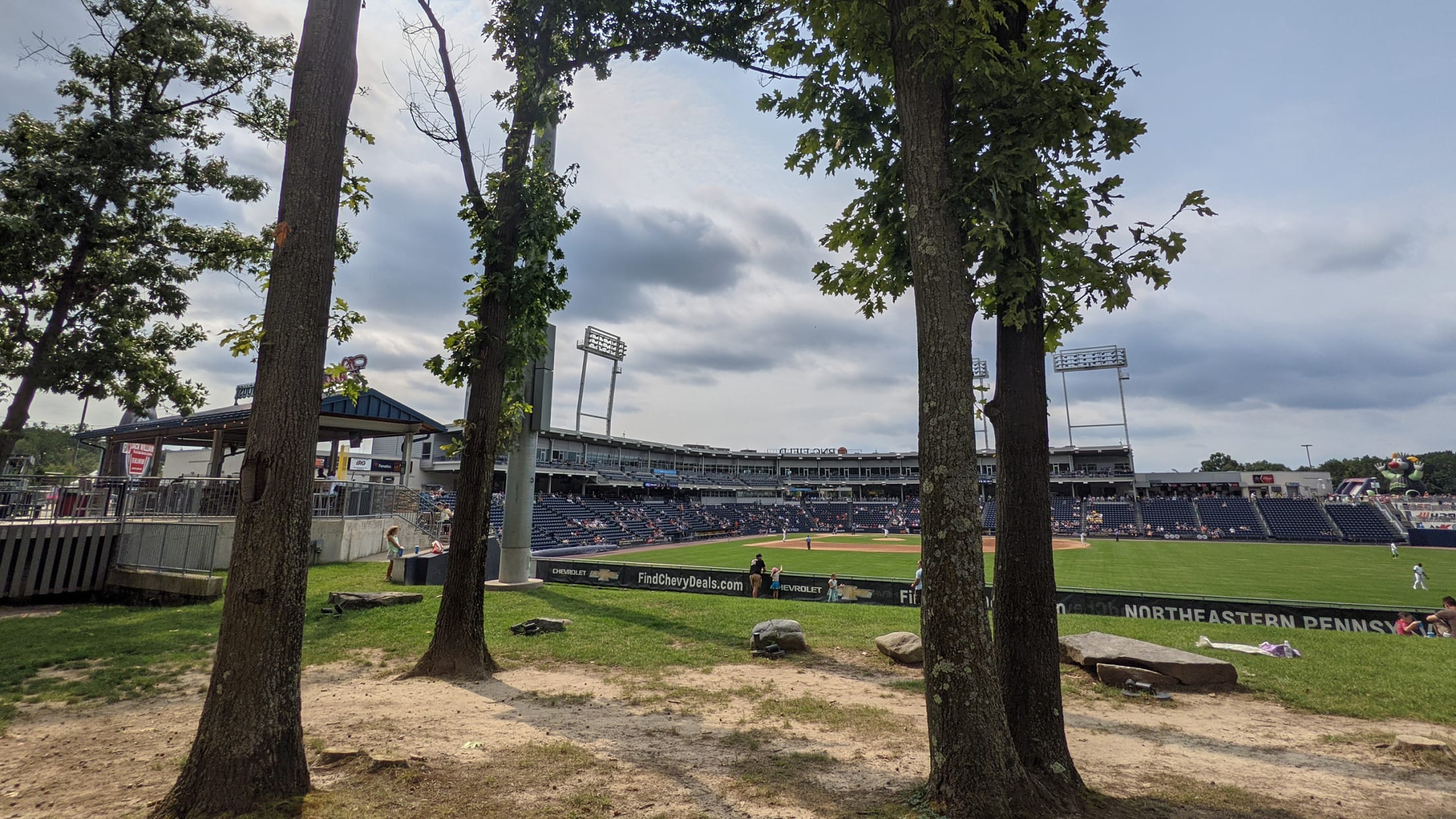 The 2013 renovation of PNC Field introduced a 360-degree concourse and plenty of options to choose your view of the ballgame if you don’t like the perspective from your seat – or you just want to buy general admission tickets.

Stand along ledges behind the seats in the main bowl, enjoy dinner at the terraced tabletops in front of the Budweiser RailHouse in right field, relax in high-backed swivel chairs in the outfield or gather your group around a picnic table in center field or above the bullpens in left field. There’s also a small berm section in left-center field between the bullpens and the batter’s eye, and a larger one behind most of the right-field wall. 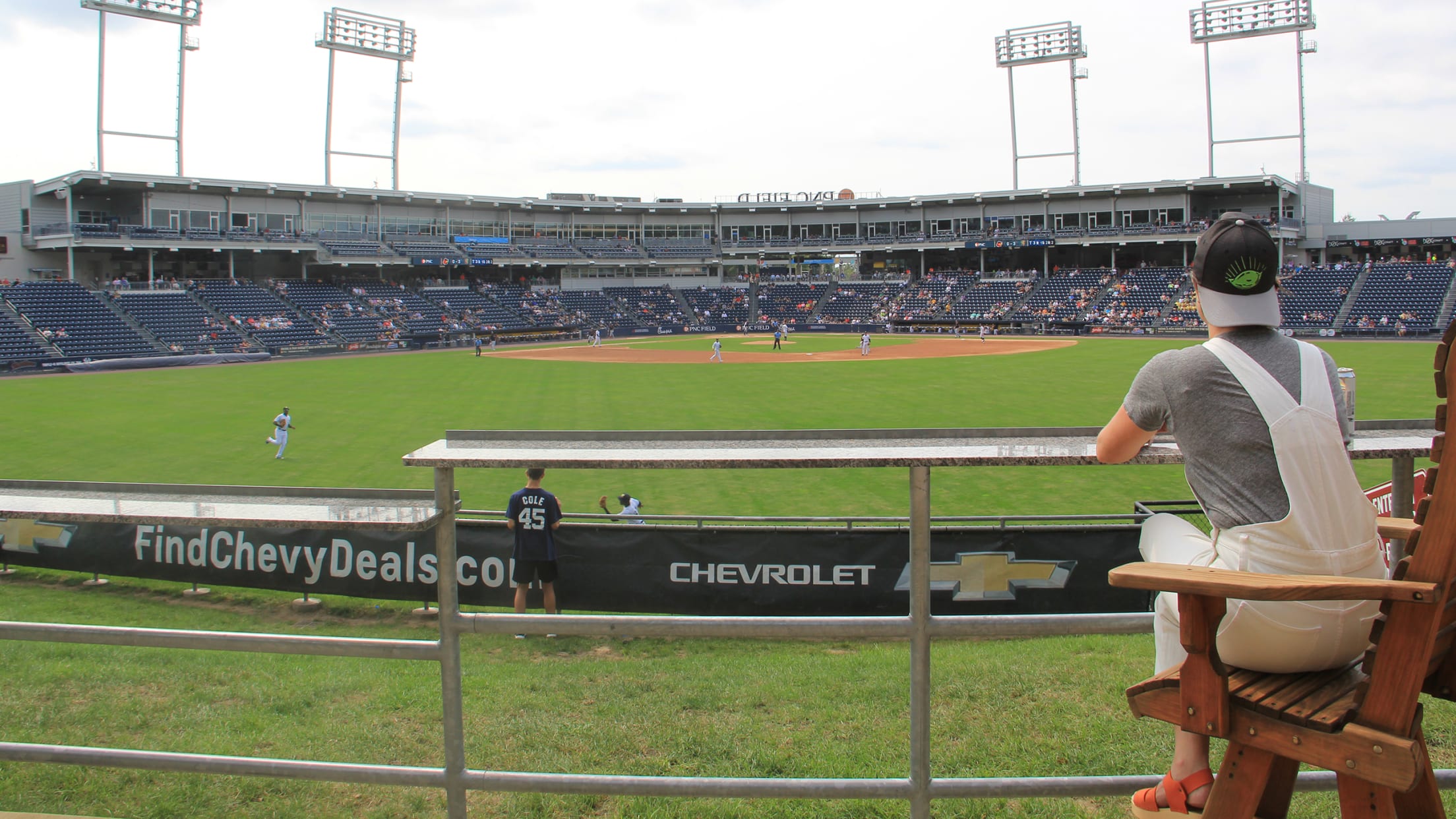 Additions to the general ballpark fare include pierogies, mac and cheese and Chickie's & Pete’s seasoned “crab fries.” The Budweiser RailHouse includes a Smokehouse BBQ stand – with the smoker right there! – and smoked meats are also available on soft tacos and loaded nachos at a kiosk on the third-base concourse.

Craft beer options – available at the RailHouse as well as kiosks on both sides of the main concourse – include Susquehanna Brewing, Stone, Troeg’s, Shock Top, Dogfish Head and Allagash. 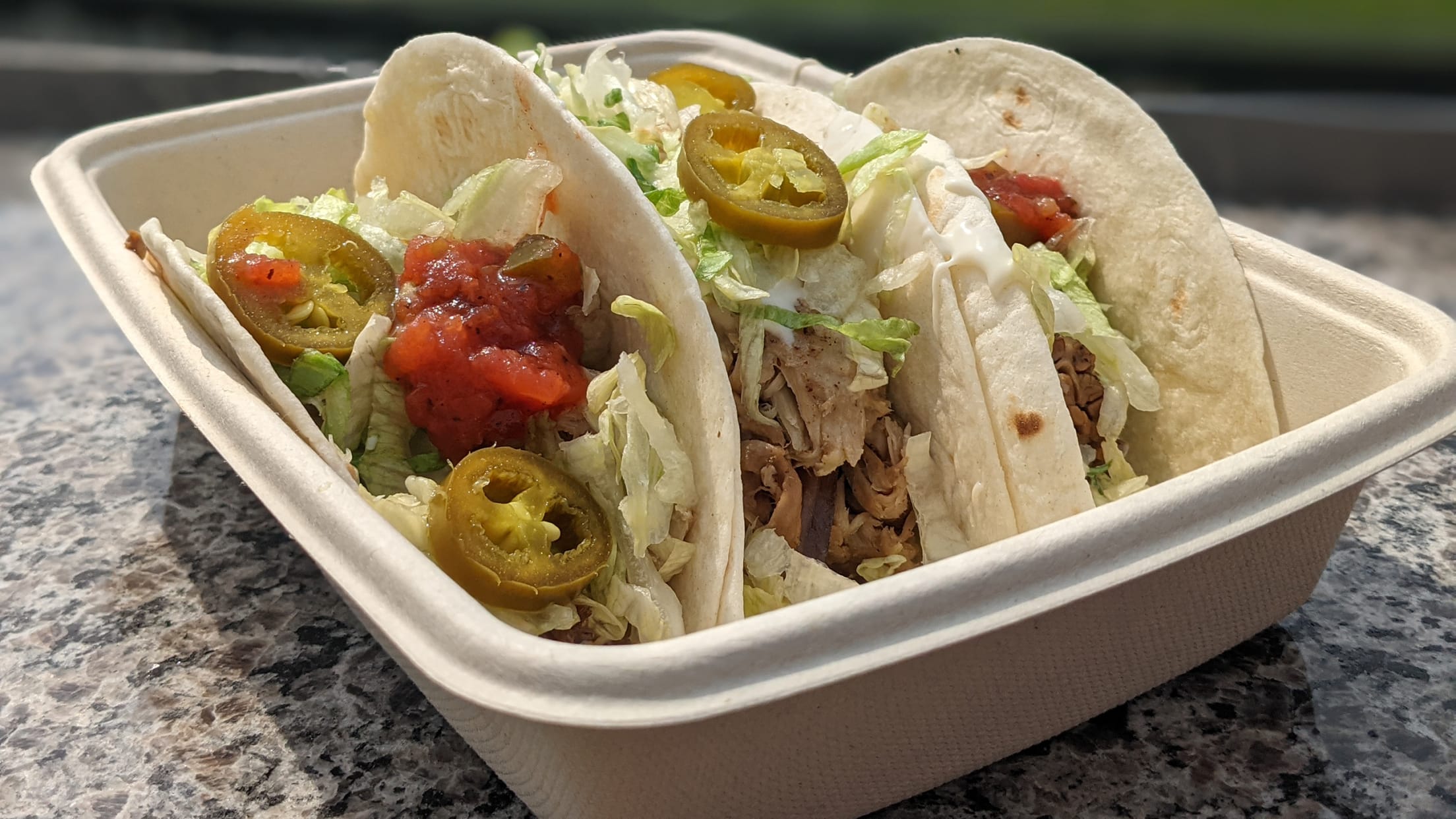 You might find Champ waiting at a table just inside the main gate, ready to sign autographs. He’s also very accessible during the game, strolling the concourse or settling into an empty seat to watch the action on the field. He’ll also be there at the finish line of the Yankees Legends Race, contested by Joe DiMaggio, Mickey Mantle, Billy Martin and Thurman Munson. 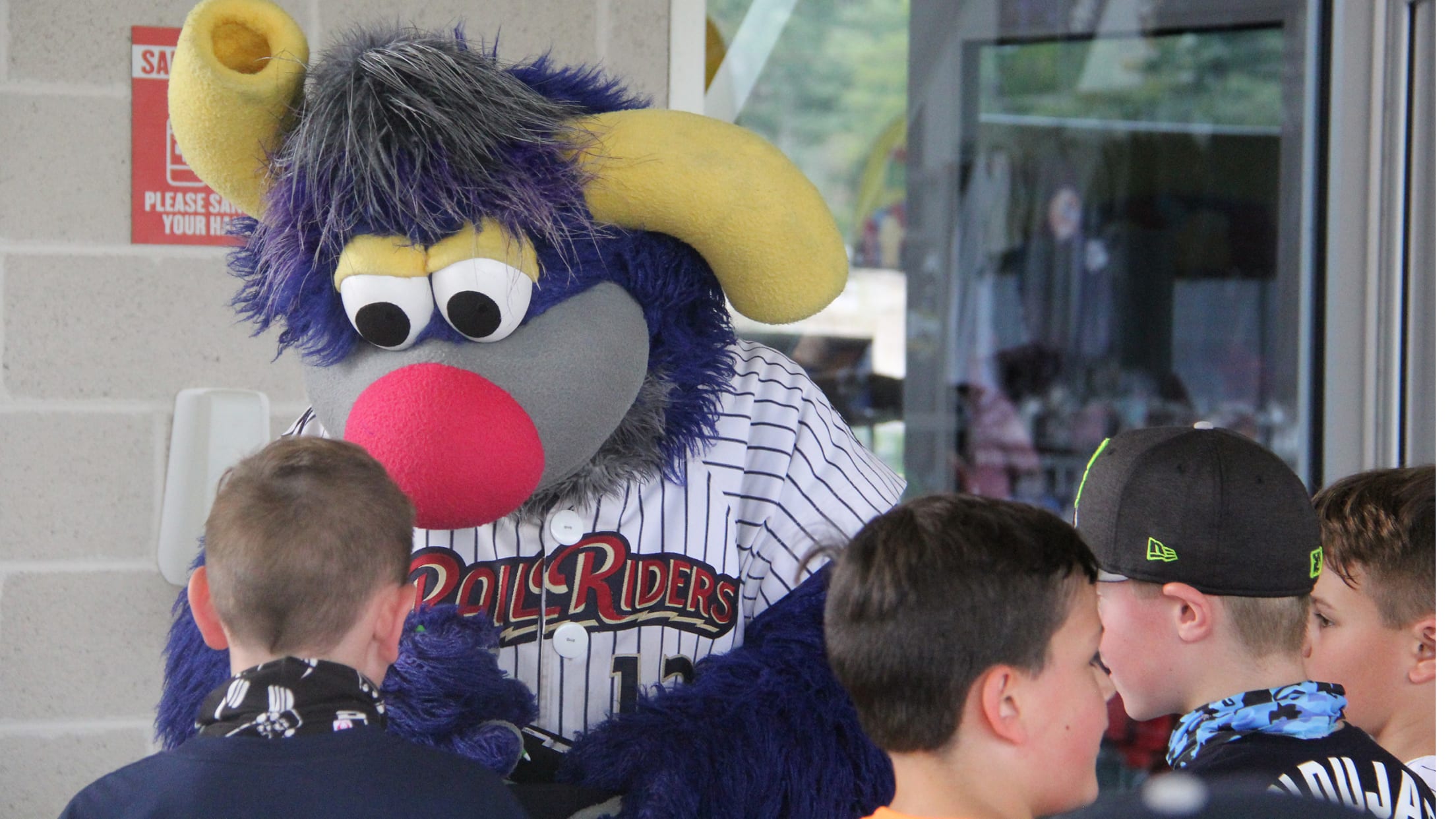 For anyone who likes to check off national park sites and ballparks in the same day, Scranton has you covered. Steamtown National Historic Site, centered around the working turntable and roundhouse of the former Delaware, Lackawanna and Western Railroad yards, contains exhibits, rail cars and locomotives – some deteriorating, some refurbished, some operational! – all maintained by the National Park Service. Check the park’s website for schedules of out-and-back excursions on vintage passenger cards pulled by original steam engines.

If you’d like to ride the rails right to the ballpark, get on board at The Electric City Trolley Museum, adjacent to Steamtown NHS, which offers trips to the ballpark for select games each season on a restored trolley car. 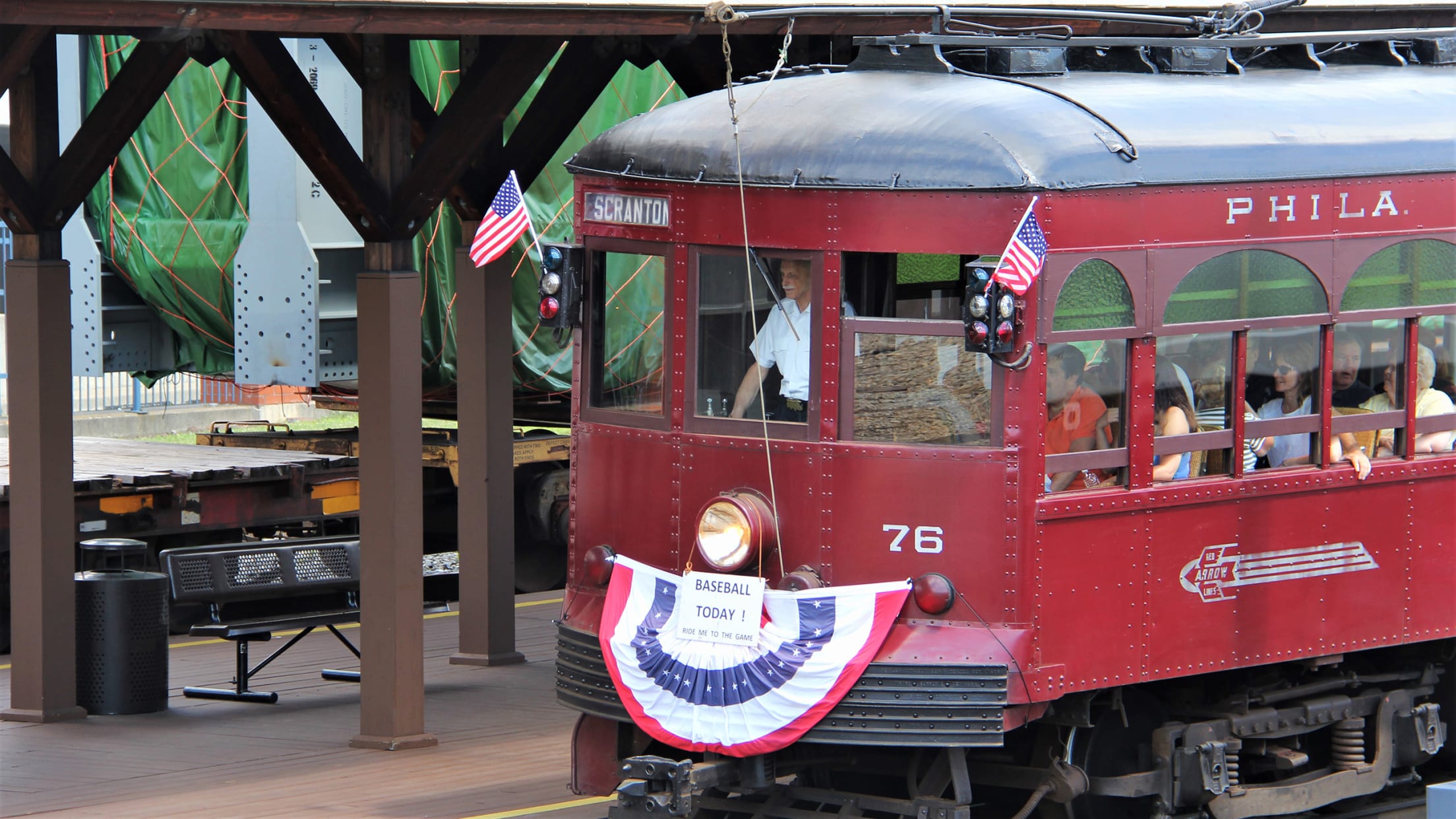 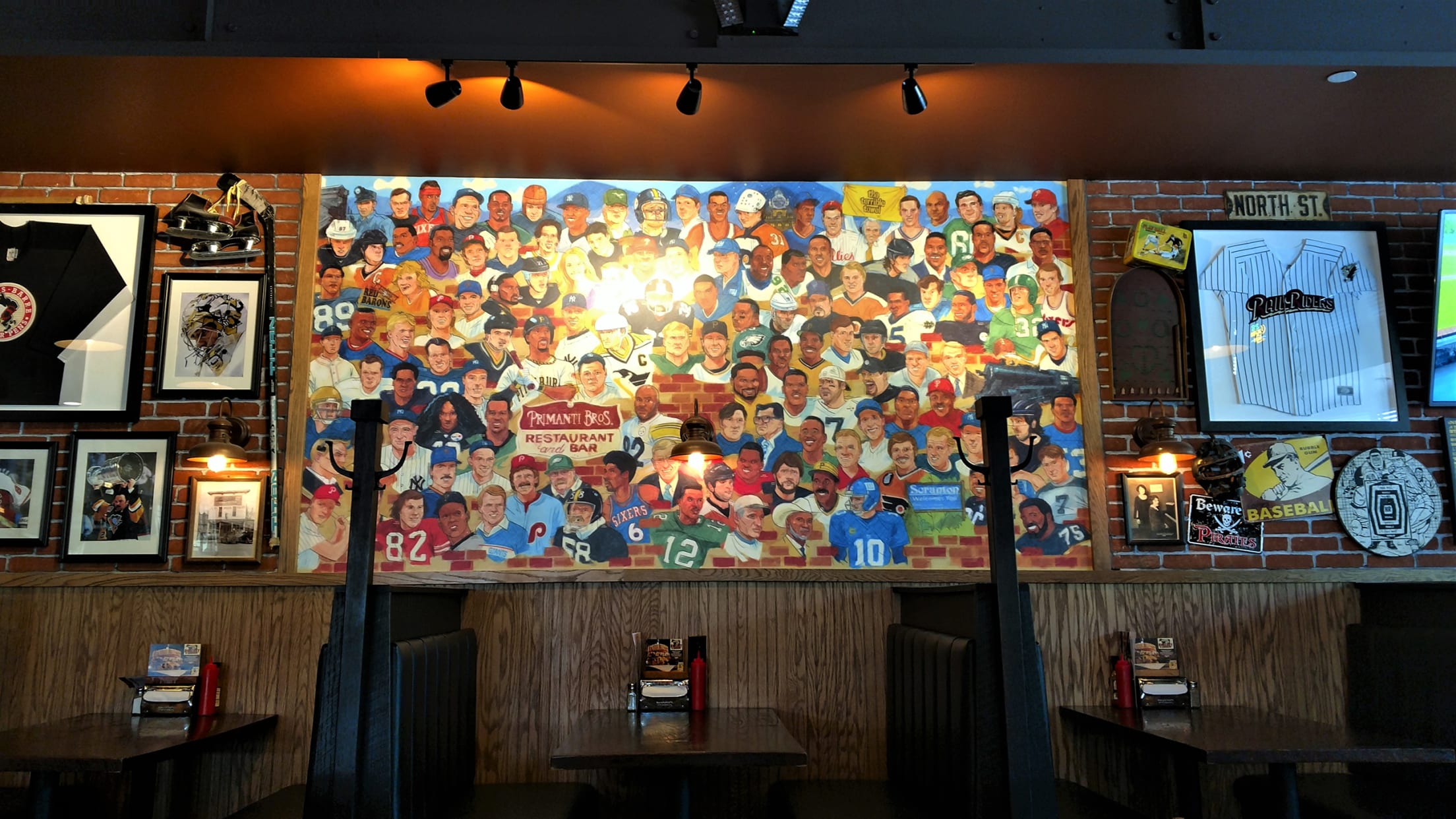 Primanti Bros. may be a Pittsburgh institution, but its easternmost outpost is just north of Scranton, in Dickson City. Why have French fries as a side item when they can be packed into the sandwich itself? Downtown Scranton boasts 60 restaurants, cafes and pubs, and the University of Scranton offers a downloadable map to navigate the streets.

While cans of Susquehanna Brewing Co. are available at the ballpark, the brewery is nine miles south in Pittston. The tasting room is open seven days a week, with happy hour Wednesday-Sunday and bar snacks available.

The RailRiders’ website lists several hotels near the ballpark, including a Fairfield Inn and Suites and TownePlace Suites with a few select rooms that just might offer a view down to the field from their perch on the mountain beyond the outfield wall. For a sense of historic Scranton – and to fully embrace the RailRiders lifestyle – check out the Radisson Lackawanna Station Hotel Scranton, a converted 1908 train station in the heart of downtown.

The RailRiders are the northern- and eastern-most of the six affiliated Minor League teams in Pennsylvania. Their closest neighbor is also a Triple-A rival, the Phillies’ Lehigh Valley IronPigs affiliate located 90 minutes south in Allentown. Continuing south and west from there, you’ll find the Reading Fightin Phils (Philadelphia’s Double-A affiliate), the Harrisburg Senators (Double-A, Nationals), Altoona Curve (Double-A, Pirates) and – in the northwest corner of the Keystone State – the Erie Sea Wolves (Double-A, Tigers).

The Road to New York 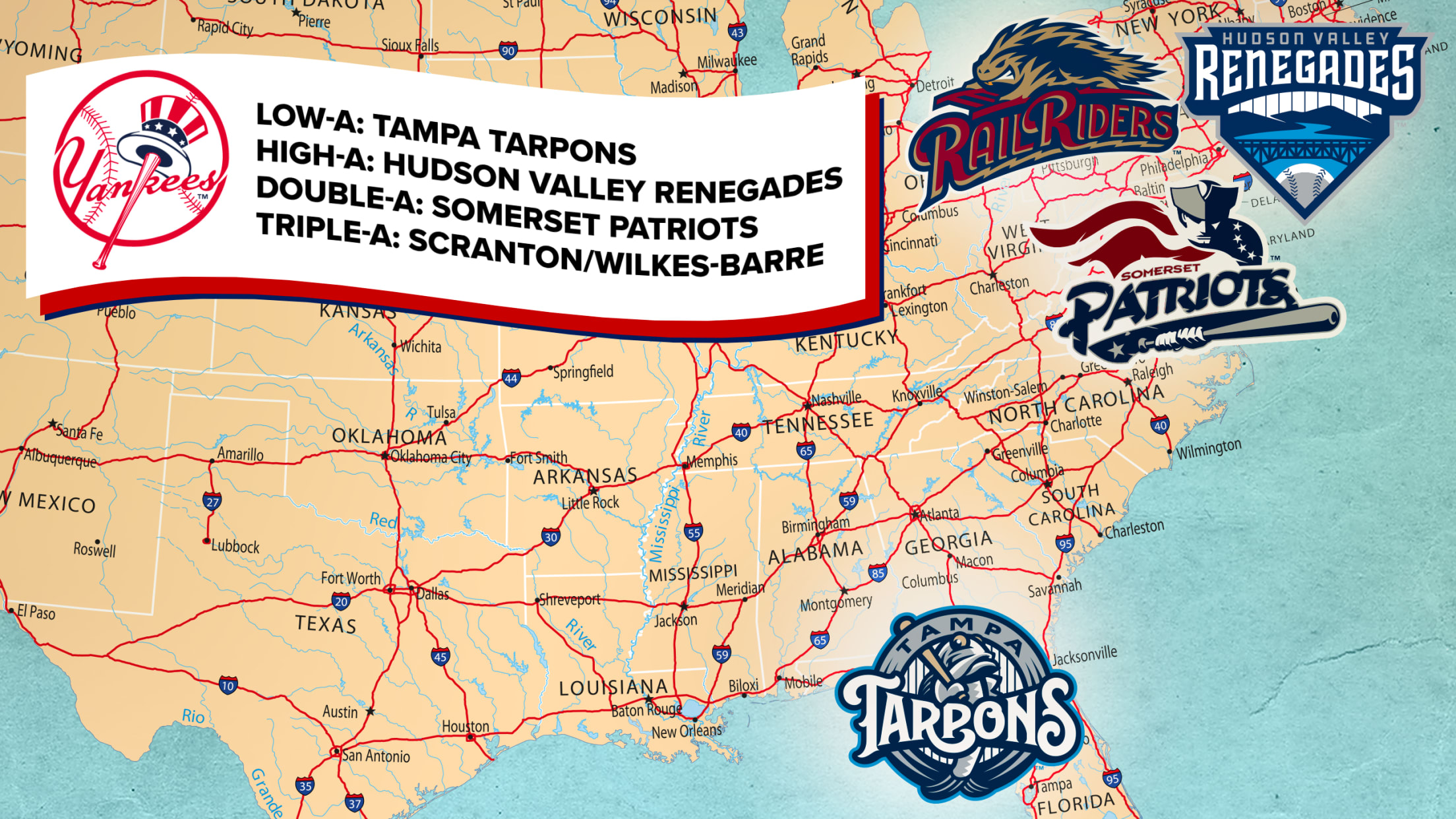 The Yankees have the New York-New Jersey-Pennsylvania tri-state area covered with their three top affiliates. The RailRiders and Renegades play in ballparks nestled into the hills but still close to major highways for easy access. The Patriots are in suburban New Jersey, while the Low-A Tarpons use the parent club’s Spring Training headquarters as their home field.