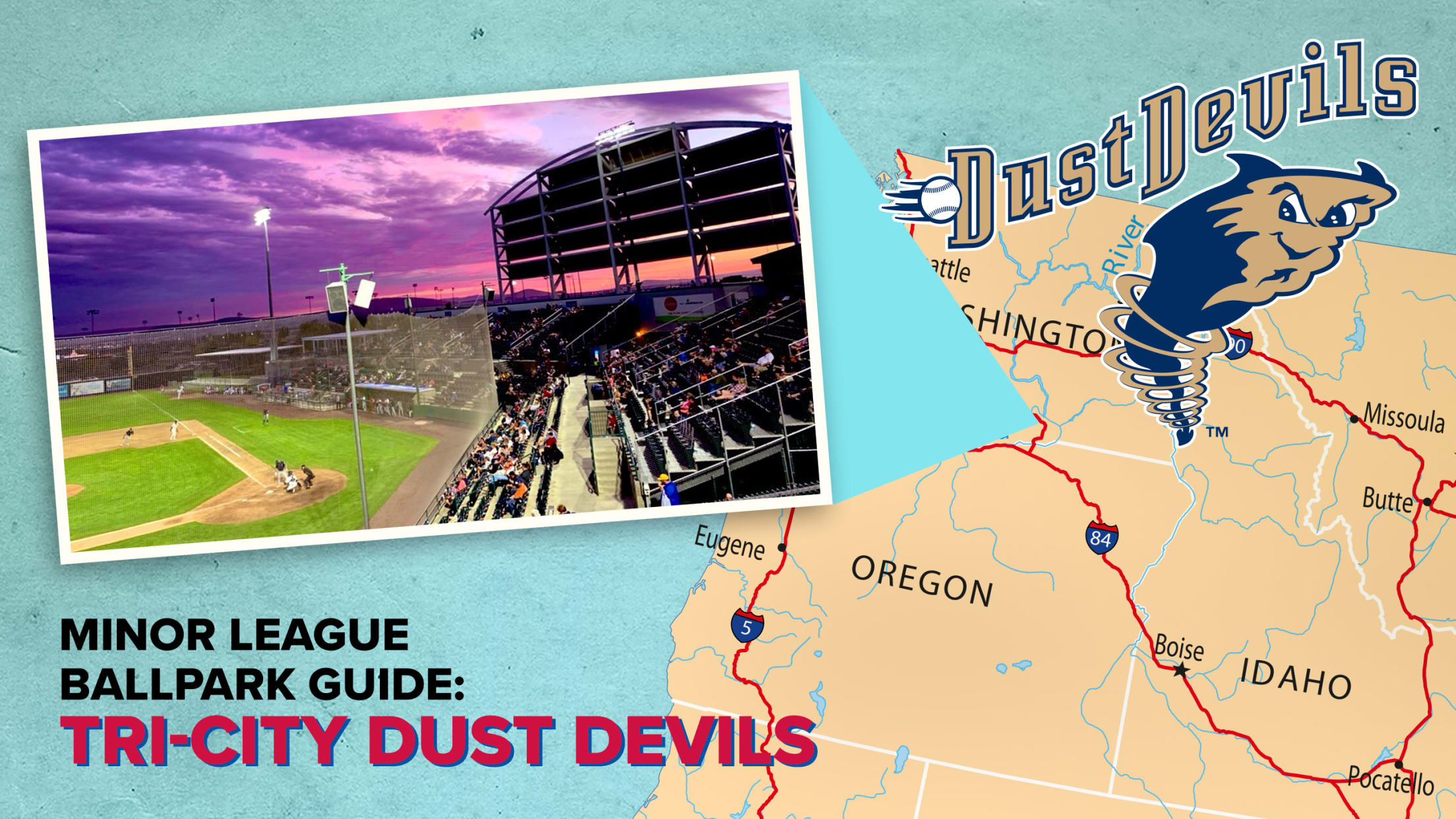 Welcome to Gesa Stadium, located in Pasco, Wash. Soak up the shade in a desert climate, sip on local wine, say hello to Erik the Peanut Guy and root for the Dust Devils as they strive to become Angels. 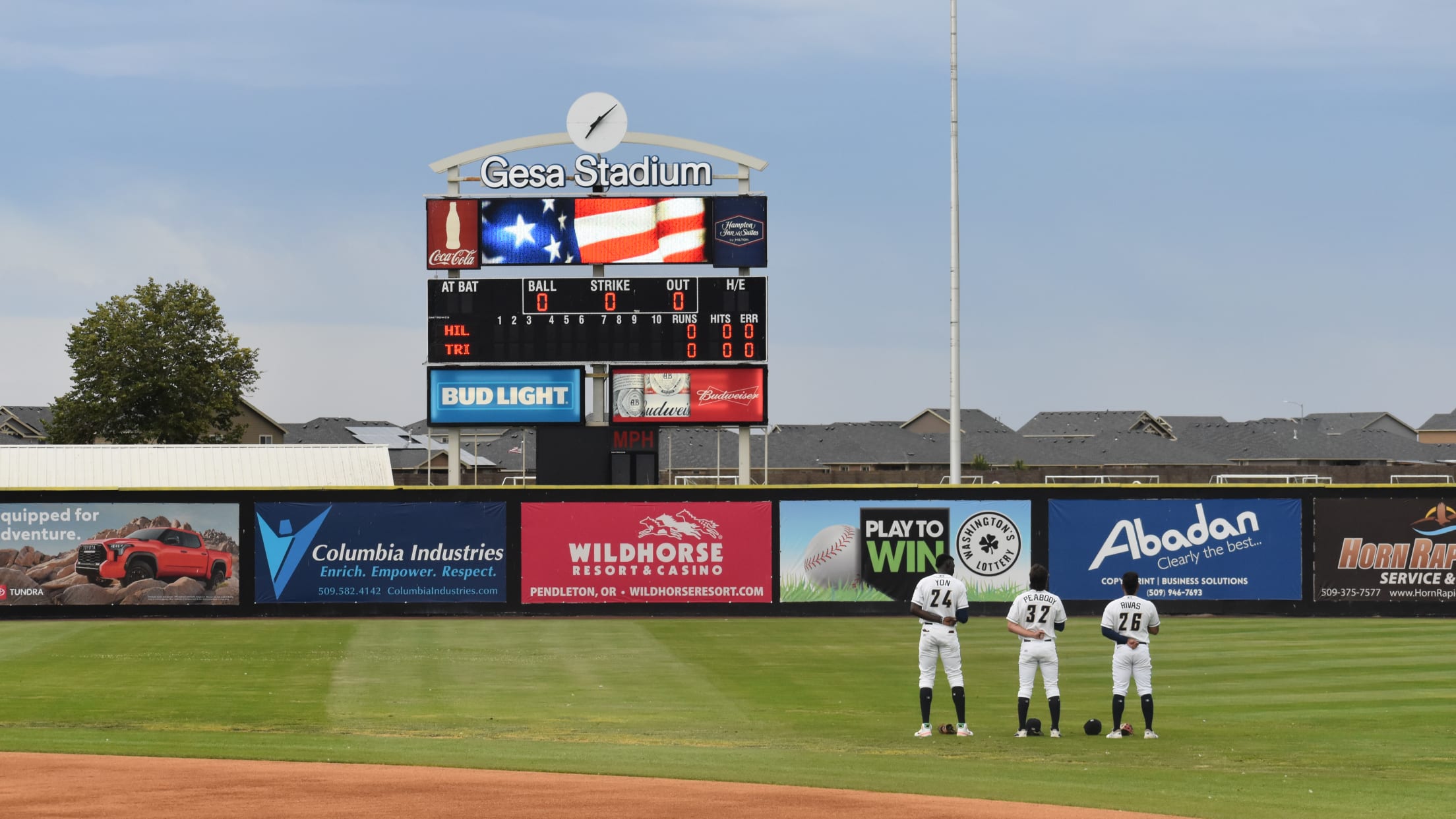 The Tri-City Dust Devils can lay claim to having the most geographically indistinct name in all of Minor League Baseball. What three cities? And where?

The triumvirate of municipalities in question are Pasco, Kennewick and Richland, located in eastern Washington's Columbia Basin Region. All three cities have been home to a Minor League Baseball team at some point, beginning with the Richland-based Tri-City Braves of 1950. 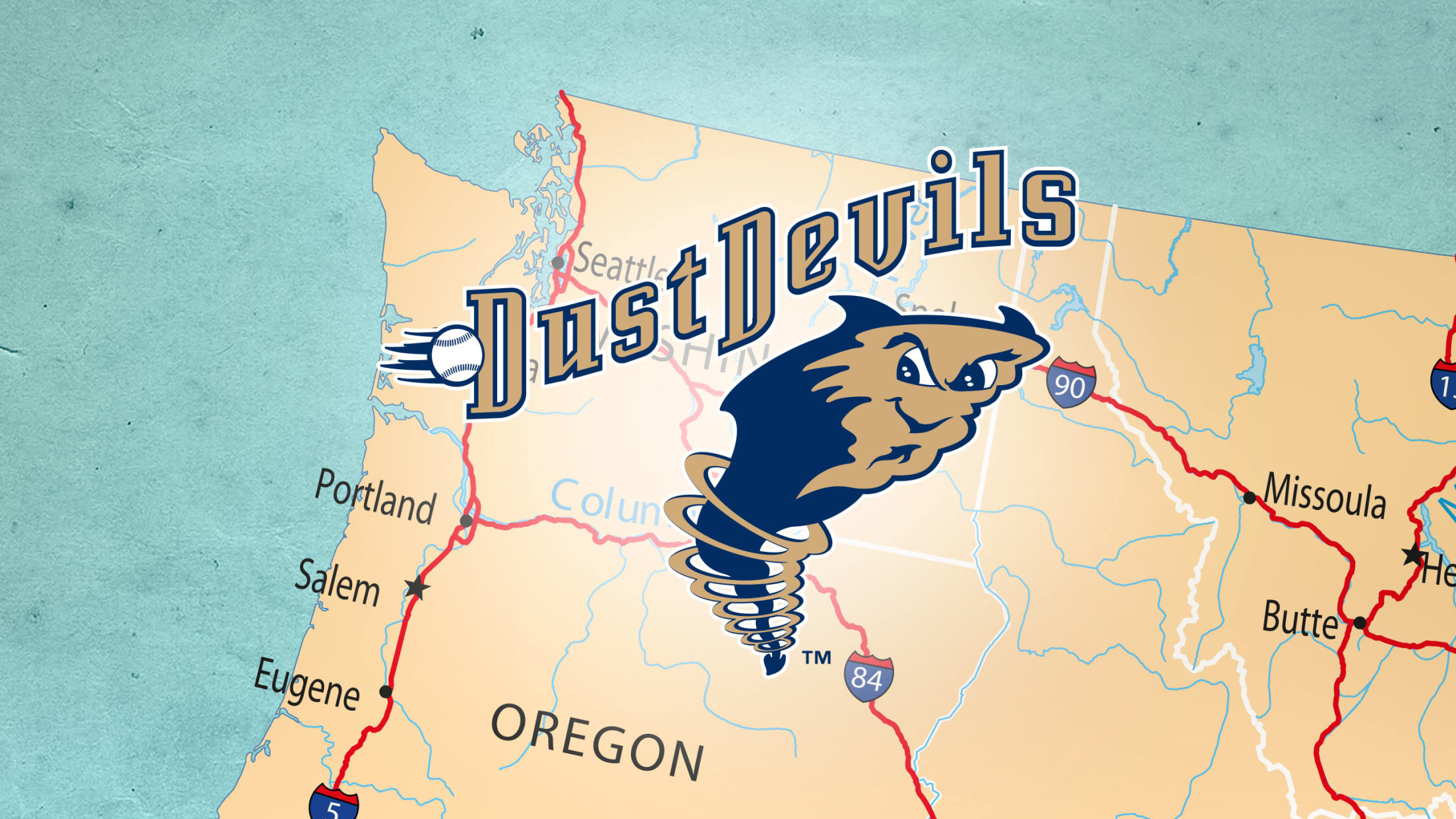 The Dust Devils, based in Pasco, arrived on the scene in 2001 following a relocation from Portland, Ore. They operate out of the Northwest League, which was classified as a Class A Short-Season circuit through 2020. In 2021, following a restructuring of Minor League Baseball, the Northwest League was shifted to the High-A level. The Dust Devils now start the season in April, as opposed to June, a circumstance that required them to acquire a ballpark tarp (it almost never rains during the summer months).

The Dust Devils were a Colorado Rockies affiliate through 2014, continuing a partnership that had begun when the franchise was in Portland. This was followed by six seasons with San Diego; their current affiliation with the Los Angeles Angels began in 2021. 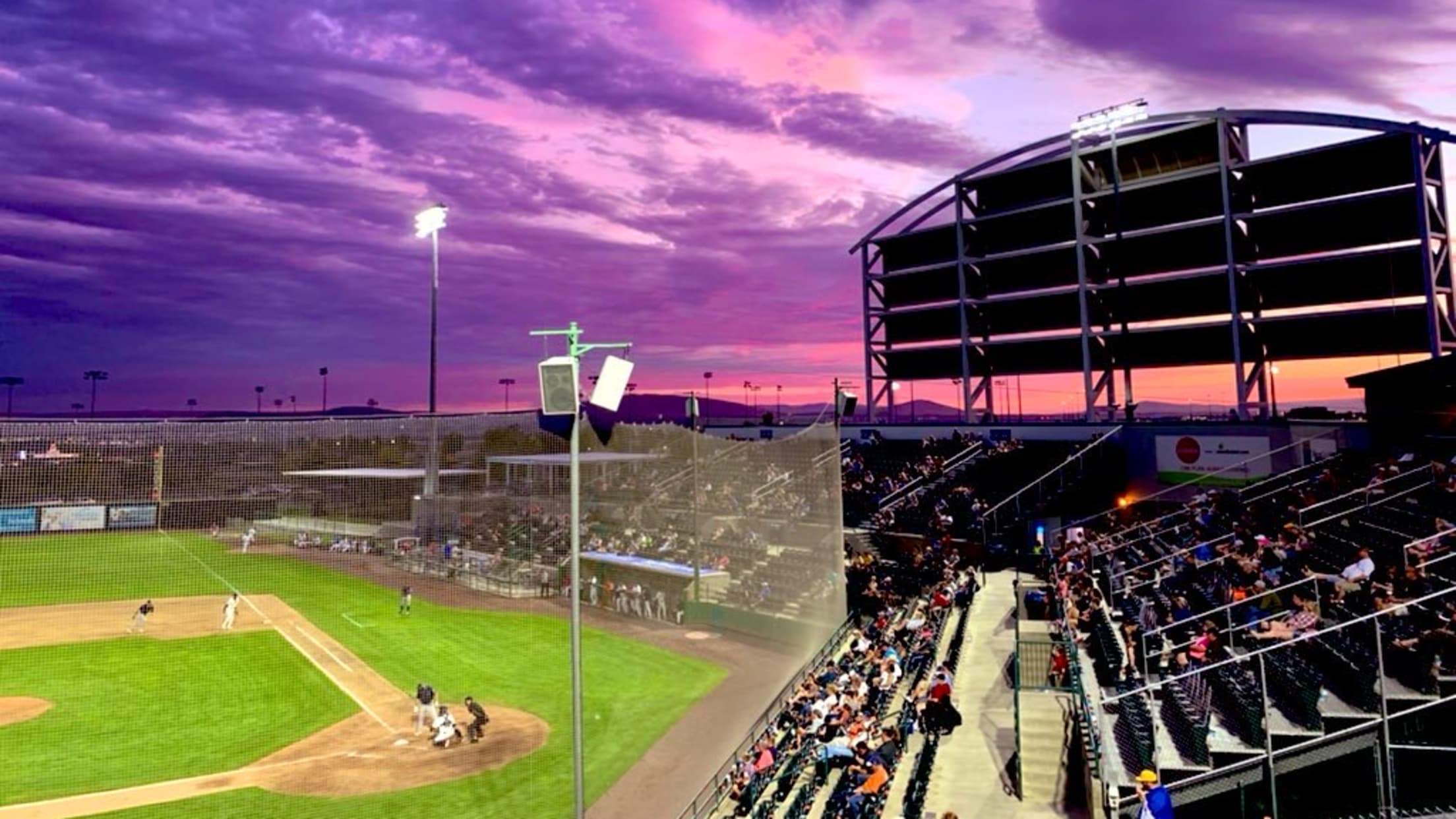 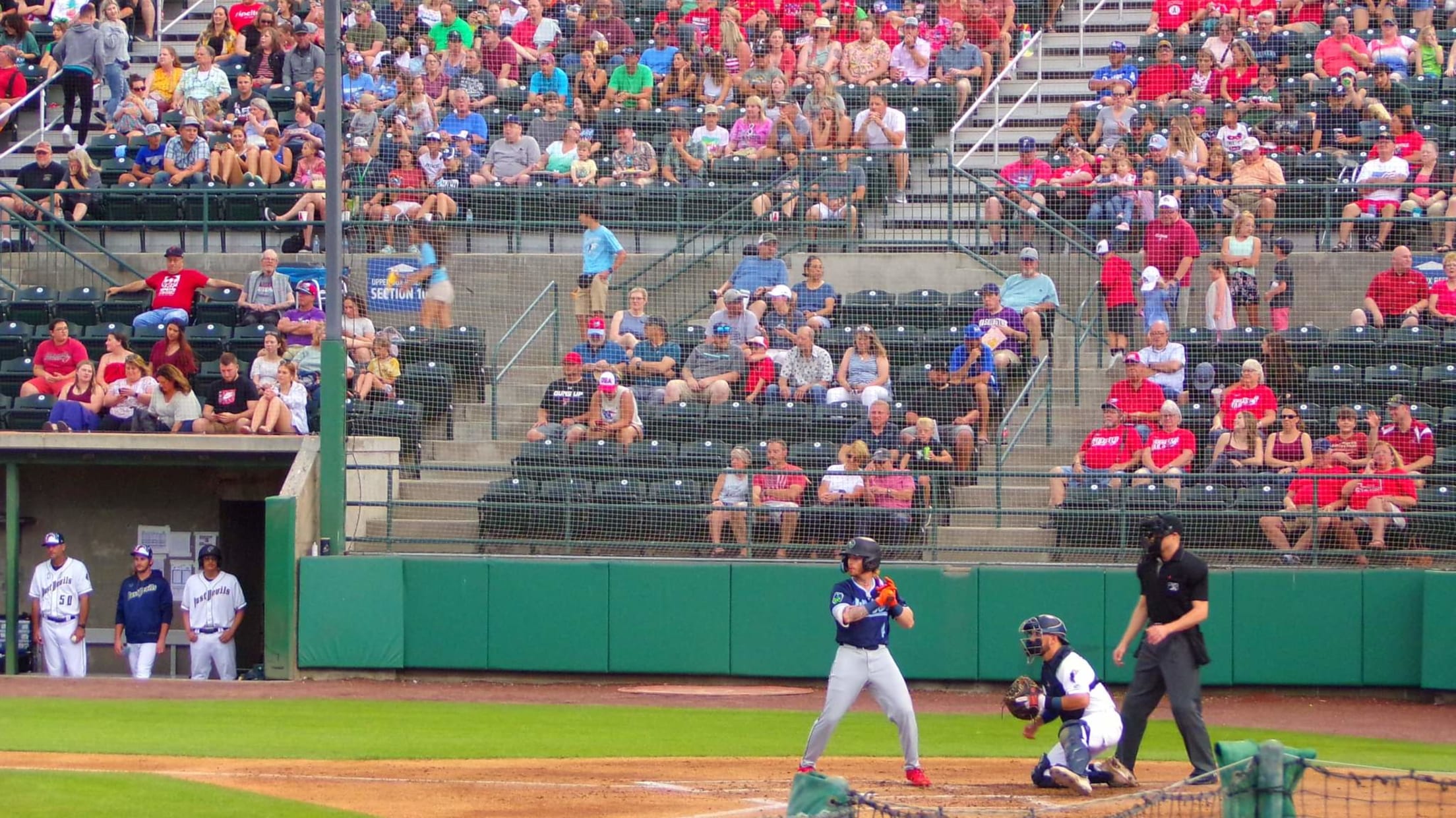 Gesa Stadium, originally known as Tri-City Stadium, opened in 1995 as the home of the Tri-City Posse (an independent team). The Dust Devils supplanted the Posse in 2001, and are now in their third decade of residency. The facility is located off of I-182, which branches off from I-82 in the neighboring town of Richland. Rolling hills are visible beyond the outfield fence, while the Columbia River is to the west and south (where it serves as the border between Washington and Oregon). The Snake River, which flows into the Columbia River, is to the east. 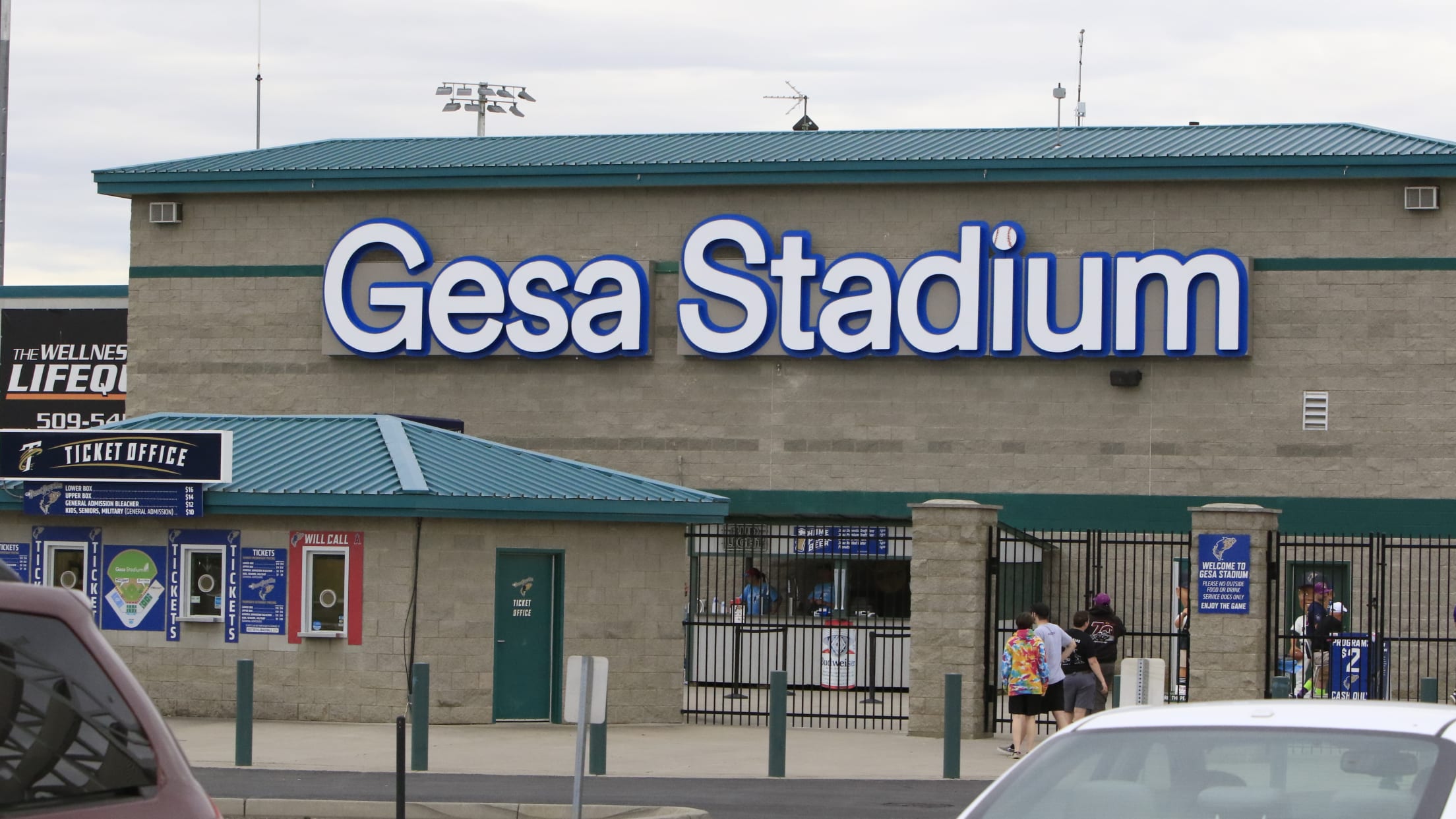 Rainouts are rare at Gesa Stadium, but perhaps you'll see a dirt-based mini-tornado sweep through the area (a phenomenon that gave the Dust Devils their name). The ballpark is aligned to the south, and while this provides views of Kennewick and its surrounding Horse Heaven Hills, it led to a major issue, as the third-base side of the ballpark was essentially uninhabitable when the sun was still up.

To rectify this problem, the Dust Devils in 2007 installed what immediately became Gesa Stadium's most unique architectural element: A massive sunshade, 56 feet high and 152 feet across, towers above the first-base grandstand. 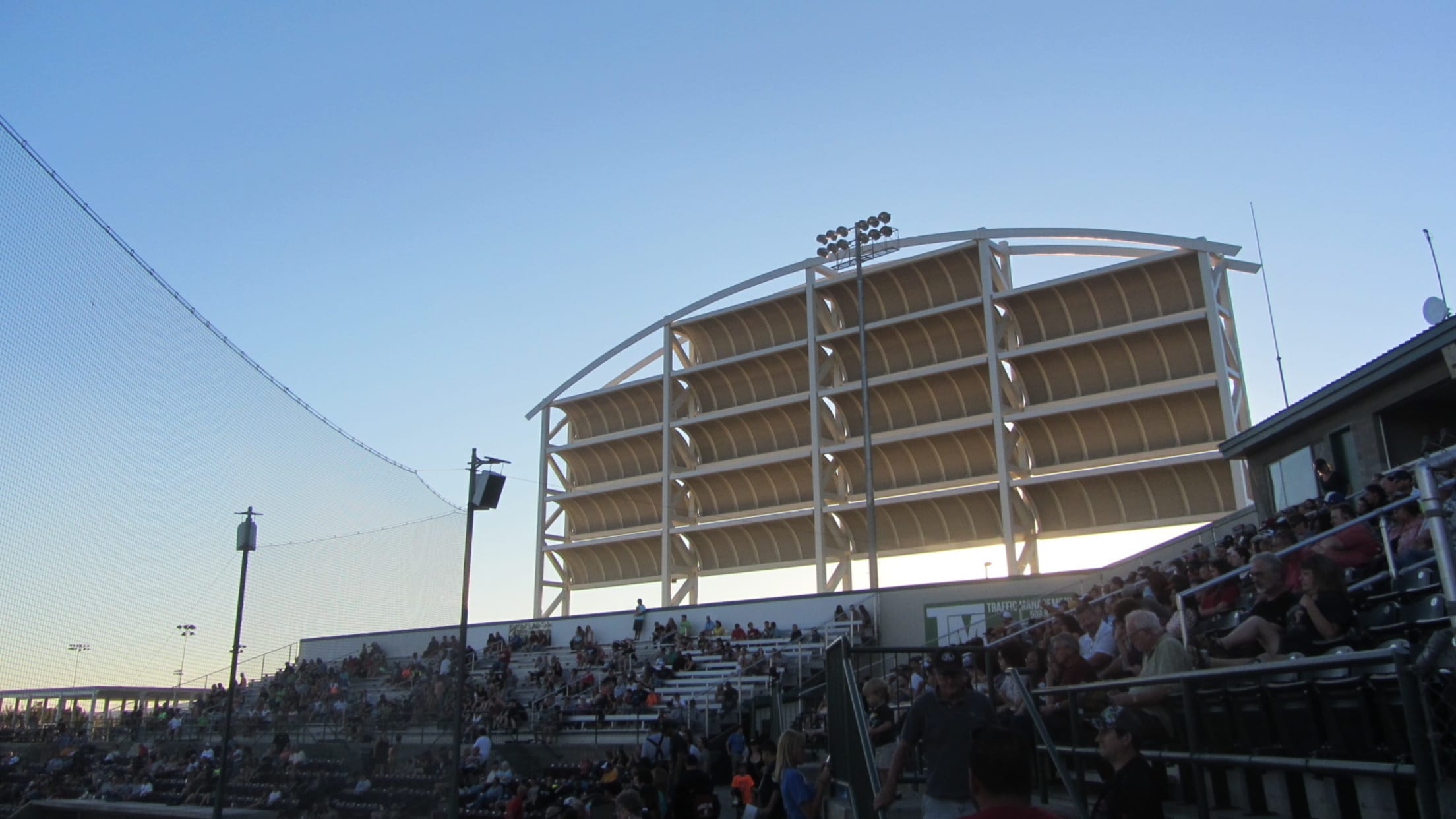 Gesa Stadium, earth-toned and low-slung, is an intimate facility. The seating bowl extends just past the infield dirt on both sides, with a section of general admission bleacher seating located on the third-base side. Dusty's Deck, a patio with room for 200 patrons, is situated down the first-base line. An external concourse is located behind the seating bowl, where fans can find restrooms and souvenirs.

Improvements to Gesa Stadium include the installation of a new seating bowl and LED field lights in 2019. Other additions of recent vintage include a new infield, new batting cages and upgraded signage. In short, the ballpark is well-positioned to host Minor League Baseball for years to come. 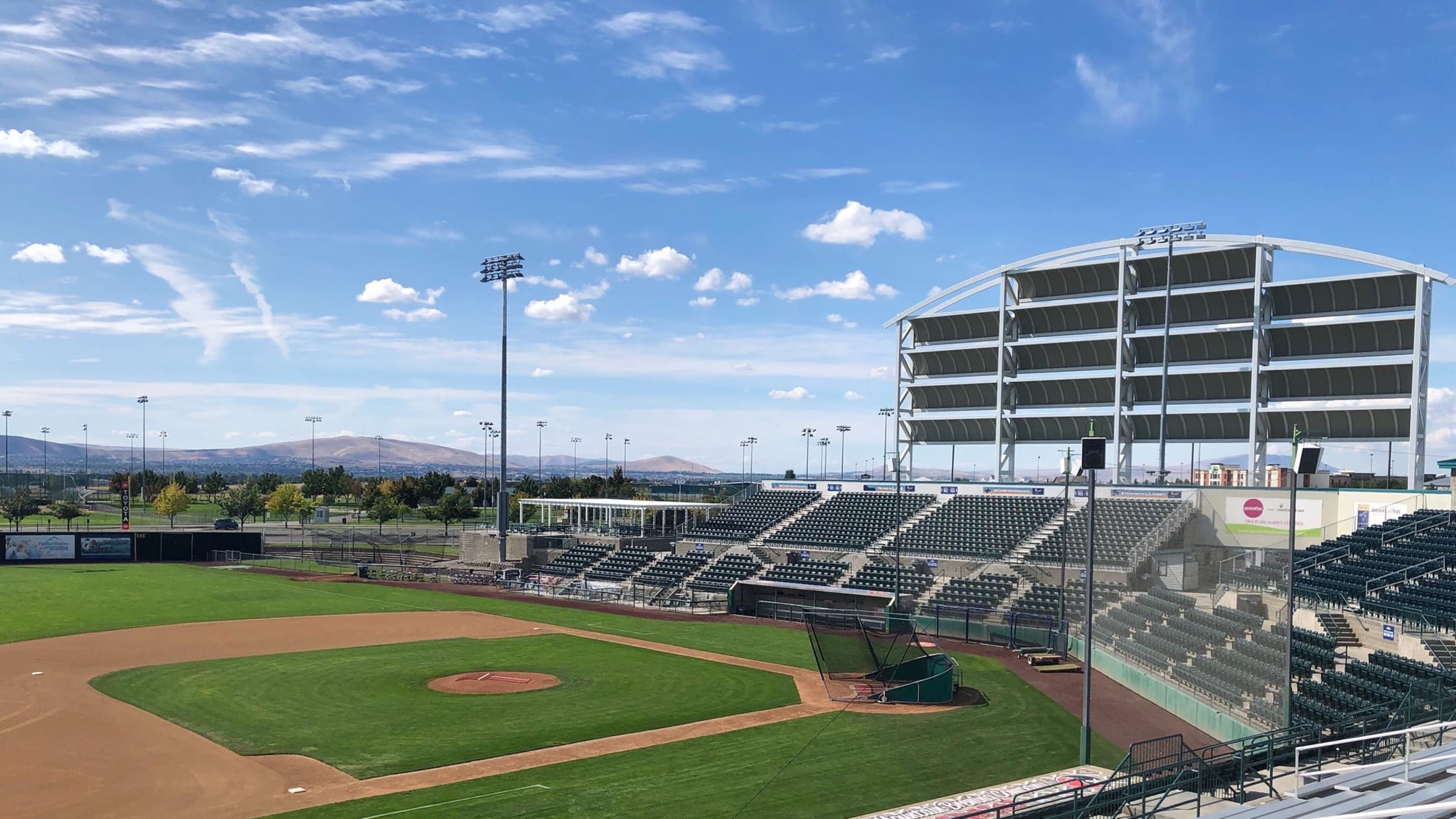 Concession stands are sprinkled throughout the concourse, offering ballpark staples as well as pizza and Mexican fare. One of the more recent additions is Dusty's Grill, serving up fresh-made burgers and sausages. Local beer, cocktails and wine are options as well. The latter is an important industry in the Tri-City region, and the Dust Devils pay tribute via their purple-hued Copa de la Diversión alternate identity, Viñeros de Tri-City. 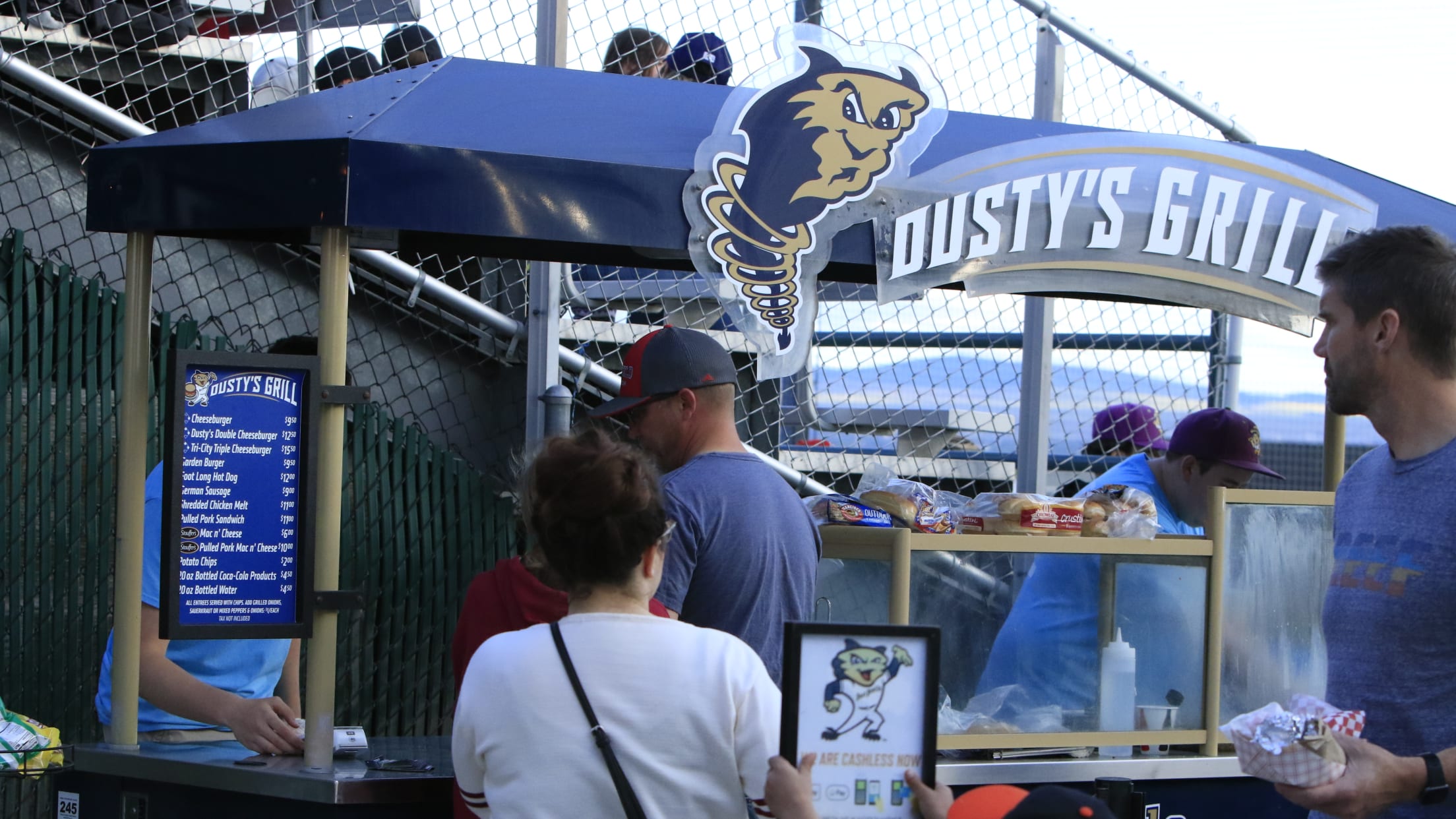 Erik Mertens - a.k.a. Erik the Peanut Guy - is not the Dust Devils mascot. But he's been with the Dust Devils since their inception, initially as "just" a peanut vendor and eventually adding on-field emcee to his resume. He can be spotted at every game wearing his signature apron and bow tie ensemble, engaging with fans in a manner that he describes as an "amped-up, caffeinated, super-fan version of me." In short: Erik embodies the Gesa Stadium fan experience to the extent that a life-size bobblehead in his likeness has been installed on the Gesa Stadium concourse. It's not a Dust Devils game without him. 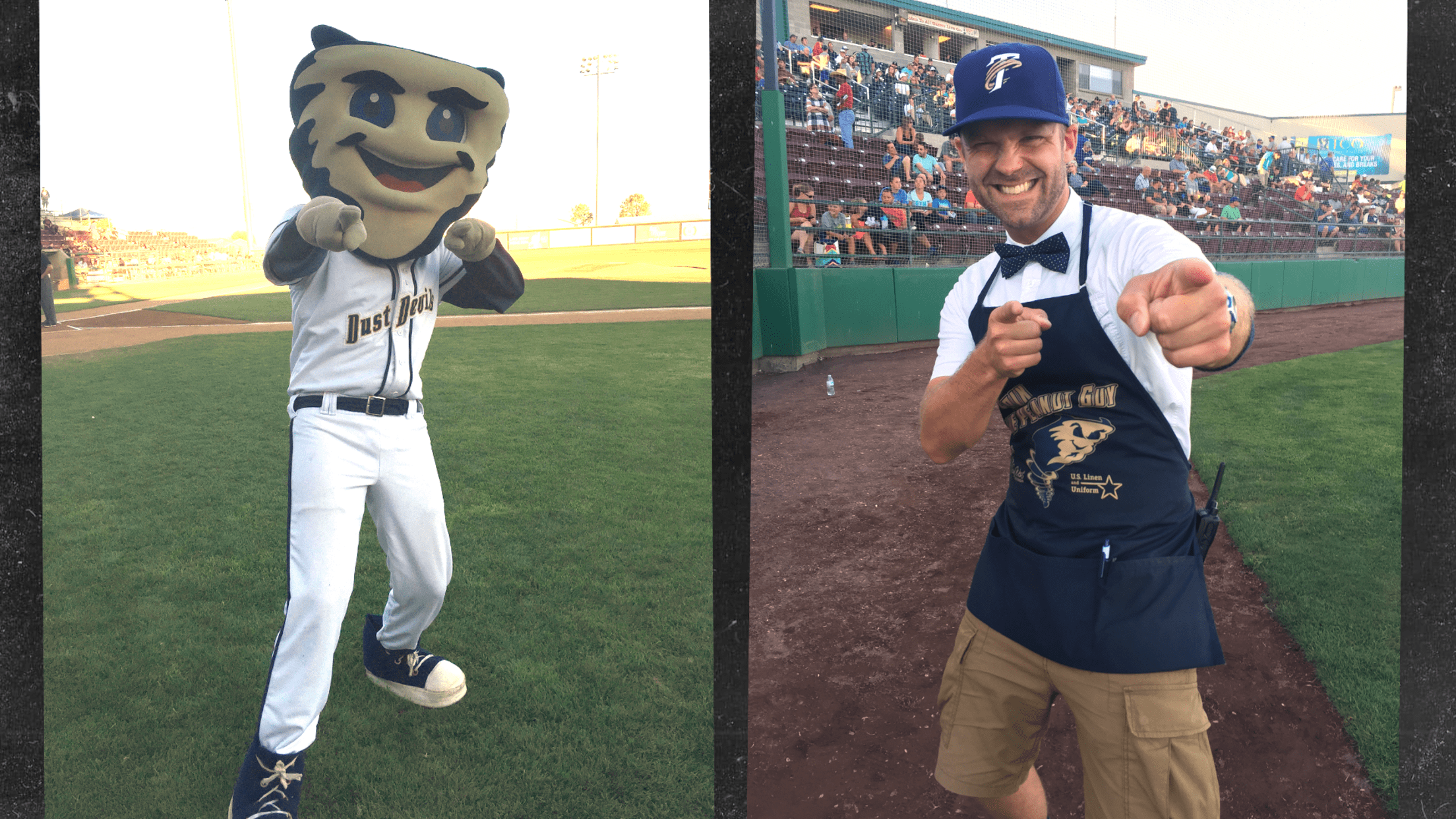 Erik, then, is more of a team ambassador. The mascot is Dusty, a whirling dervish of dirt who stirs up enthusiasm and fun wherever he goes. Spending time with Dusty is a great way to blow off some steam.

In 2022 the Dust Devils introduced their Columbia River Rooster Tails alternate identity, which celebrate the Unlimited Hydroplane races that take place during the last weekend of July. This, of course, is just one of many river-based activities in the region. 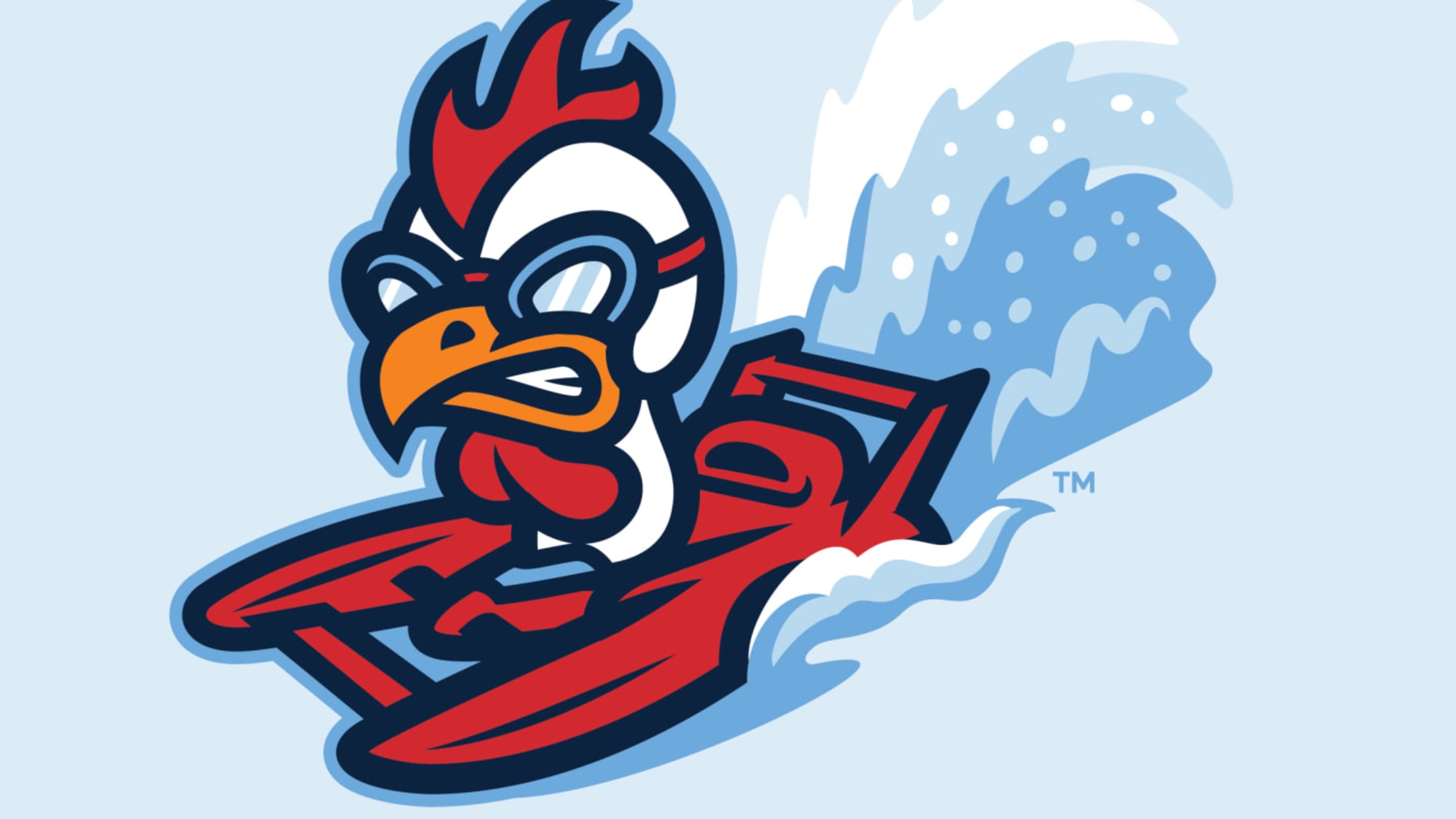 Begin your explorations at a riverfront park - Erik the Peanut Guy recommends Columbia Park in Kennewick and Howard Amon Park in Richland. Another prime outdoor activity, per Erik, is to hike Badger Mountain (at sunrise or sunset, if possible). If level surfaces are more your thing, the Tri-Cities are home to an abundance of golf courses. To learn about the history of the region writ large - including its role in the Manhattan Project - visit the REACH Museum. 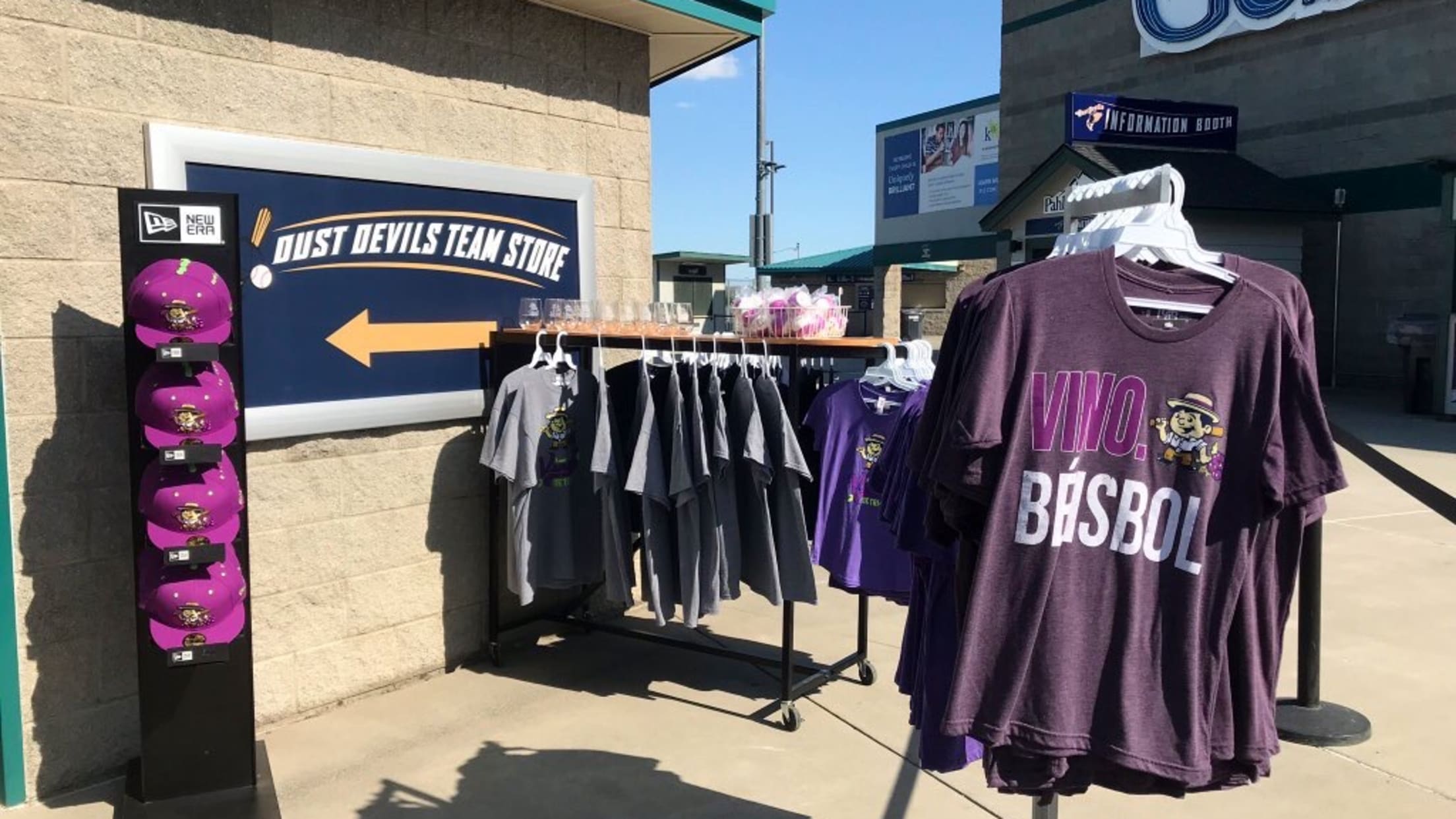 The Dust Devils' Viñeros de Tri-City alternate identity pays tribute to the local wine industry and the migrant workers who make it possible.

The Tri-City region is the epicenter of Washington's wine country, a fact amply illustrated by the the Dust Devils' Viñeros de Tri-City alternate identity. Over 200 wineries are located within a hour's drive. Prefer beer? The Tri-Cities are home to over a dozen breweries.

The area's diversity is reflected through its restaurant scene, which features cuisines from all over the world. Mexican is particularly well-represented. Try Trejo's in Pasco; Picante in Kennewick or Tumbleweeds in Richland (to name three of several hundred).

Gesa Stadium neighbors a convention center, and as a result nearby hotels are plentiful. If you're looking for something off the beaten path, consider spending the night in a converted grain bin.

The Northwest League is a scenic, sprawling circuit, and the Dust Devils are more or less in the middle of it. The Spokane Indians are the only team located further to the east, as the other clubs (Eugene, Hillsboro, Everett and Vancouver) are situated closer to the coast. The Triple-A Tacoma Rainiers and their parent club, the Seattle Mariners, are located between Hillsboro and Everett, so go ahead and add those to the itinerary as well.

The Angels' system begins close to Los Angeles, with the Inland Empire 66ers. From there it goes to Washington, detours all the way to Alabama and then heads back west to Salt Lake City. 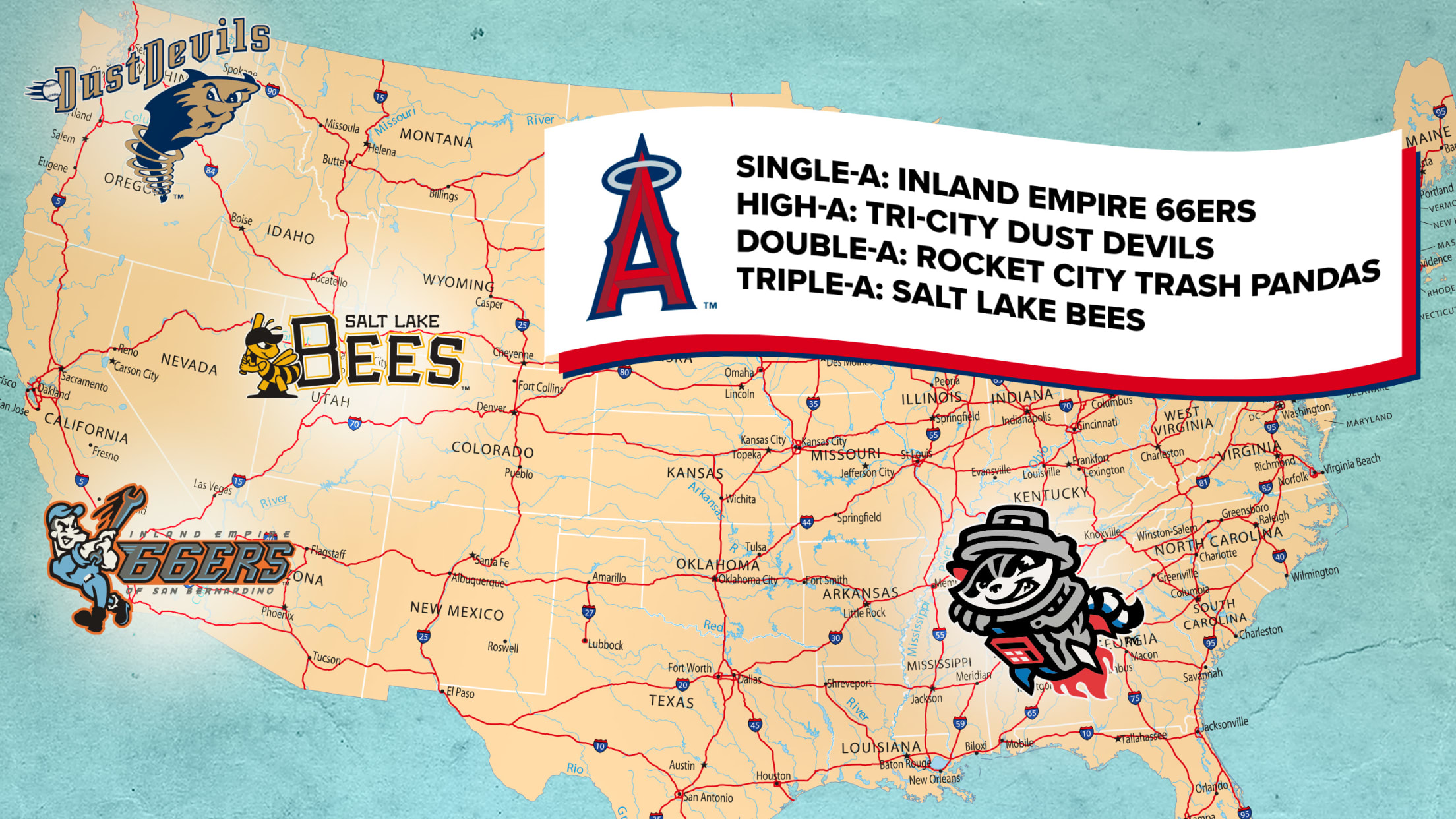