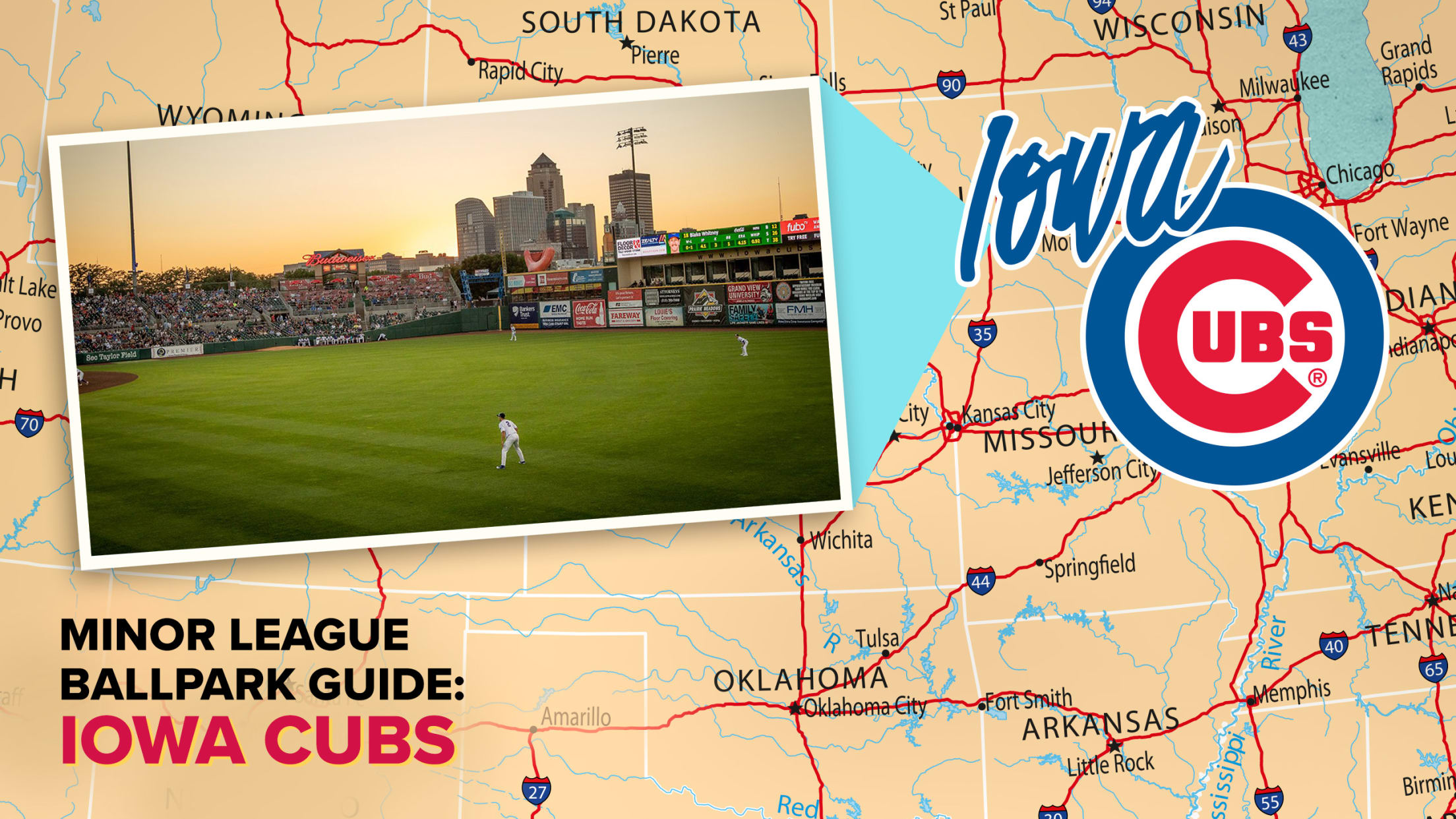 Welcome to Principal Park in Des Moines, home of the Iowa Cubs. Order up a pork tenderloin, take in the gorgeous downtown views and root for the Cubbies of tomorrow. 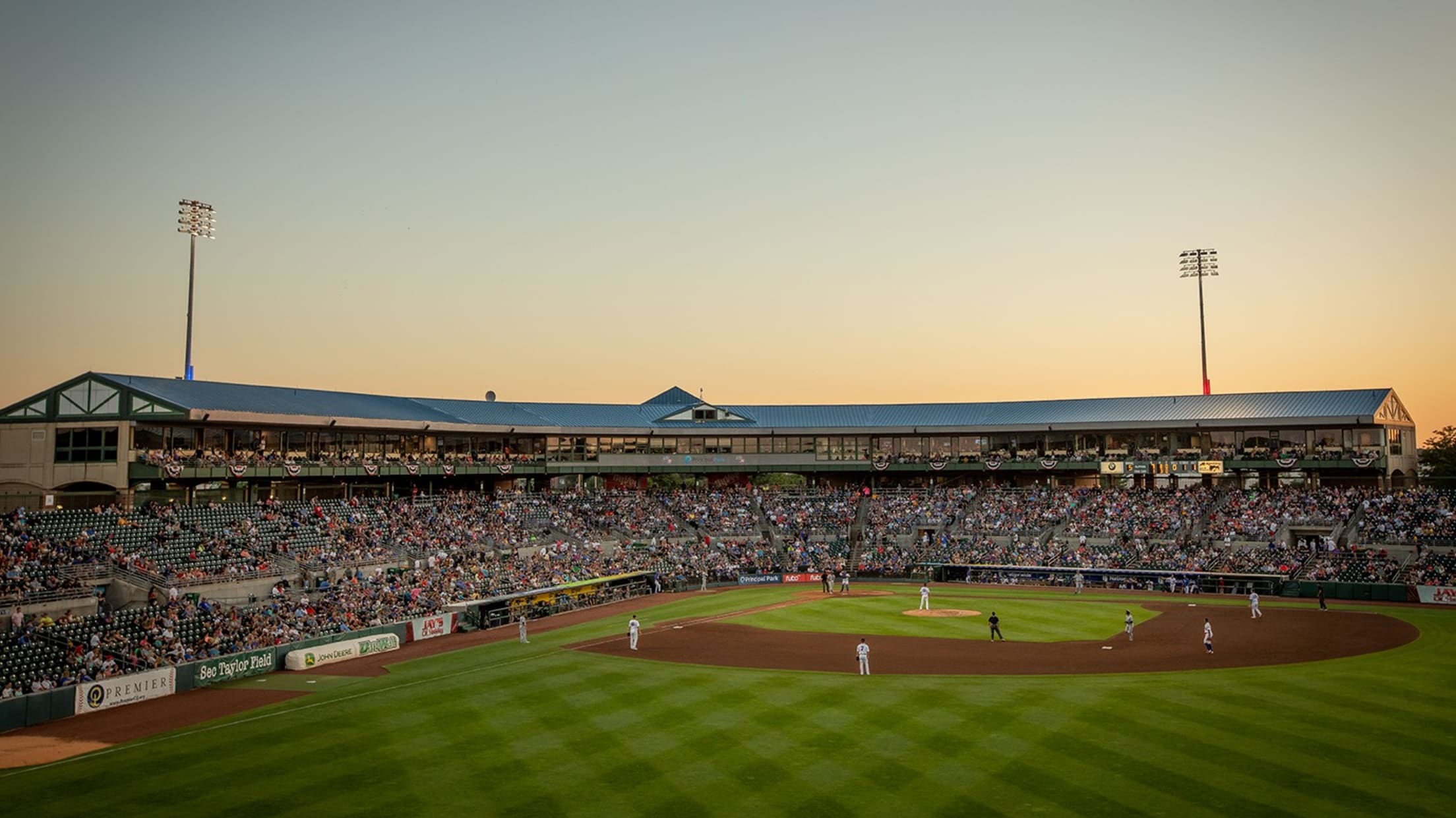 The Iowa Cubs aren't the only Minor League team in Iowa, but they are based in the state's most populous city (Des Moines) and compete at the highest level of play (Triple-A). The franchise began its existence in 1969 as the Iowa Oaks, a name that referenced Iowa's state tree as well as its Oakland affiliation. The moniker endured through subsequent partnerships with the White Sox (1973-74; '76-80) and Astros (1975), as well as during the team's inaugural 1981 season as a Chicago Cubs affiliate. The Iowa Cubs name was adopted in 1982 and, more than 40 years later, it remains. Iowa's affiliation with the Chicago Cubs is the fourth-longest in all of Minor League baseball. 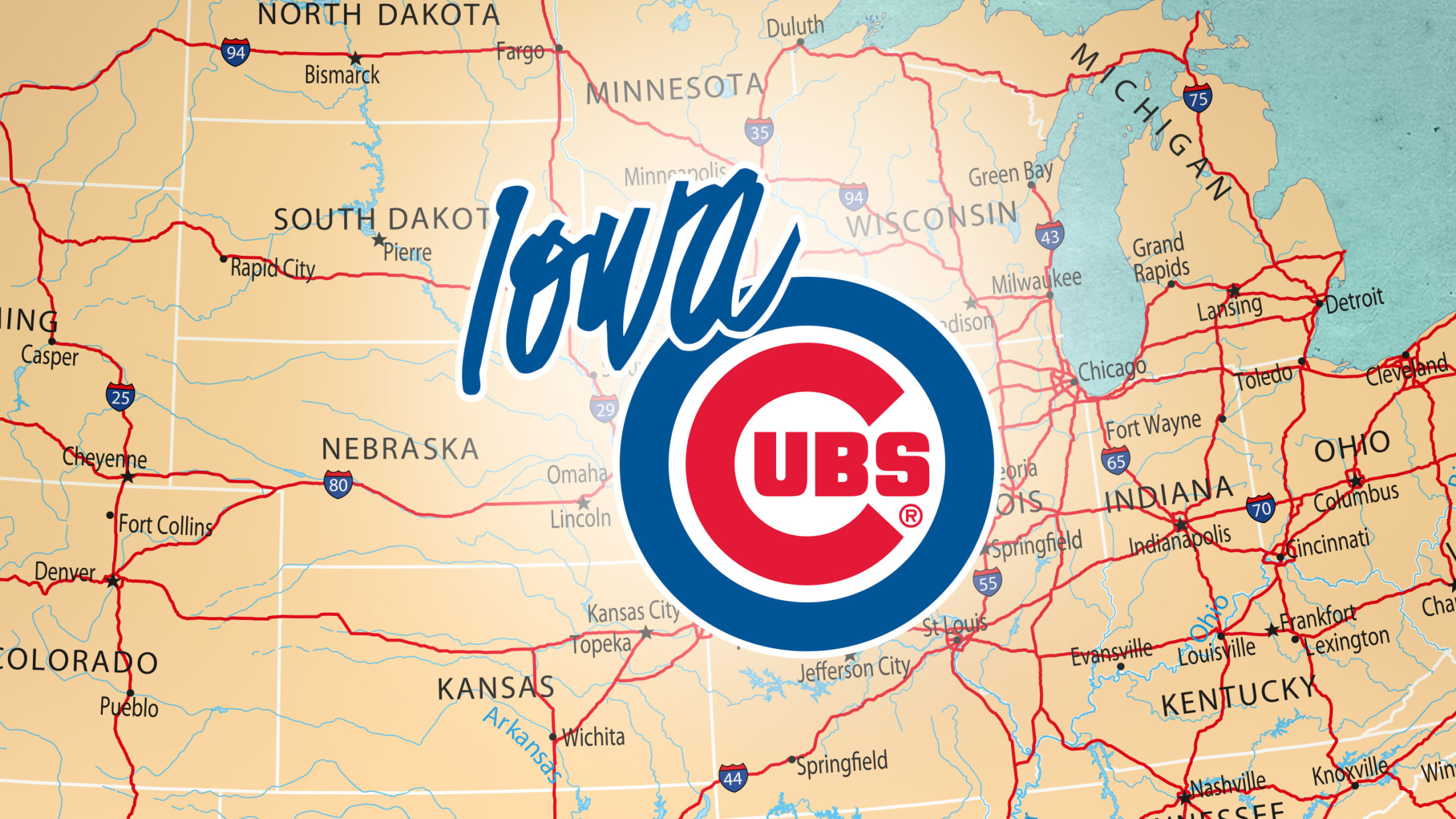 Des Moines' team has always played at the Triple-A level. The Oaks/Cubs played in the American Association from 1969-97, switching to the Pacific Coast League in 1998 following the AA's dissolution. In 2021, as part of a larger organization of Minor League Baseball, the I-Cubs were transferred to the 20-team High-A East. The High-A East became the International League in 2022, resuming a league history that dates back to the 19th century. 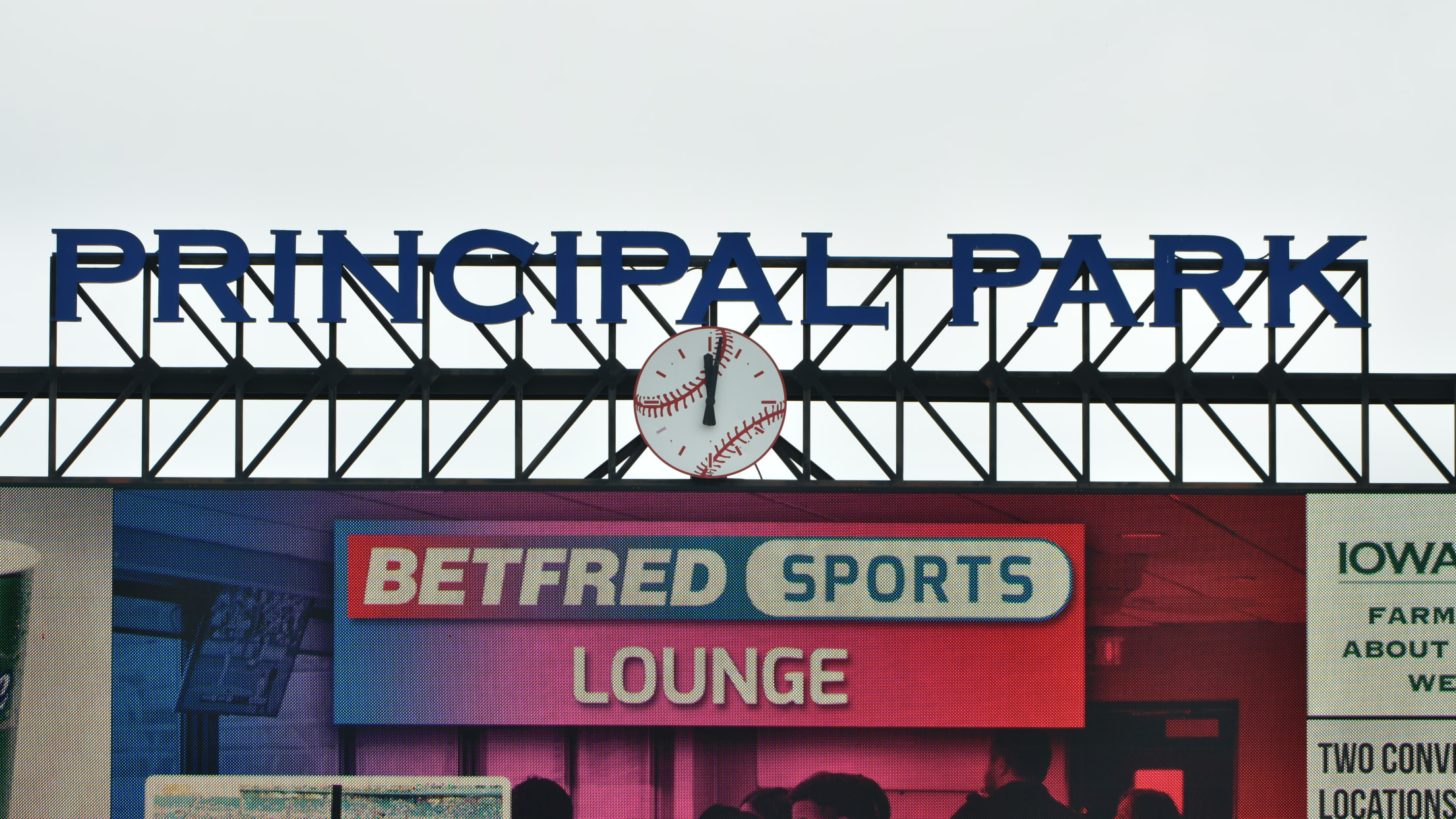 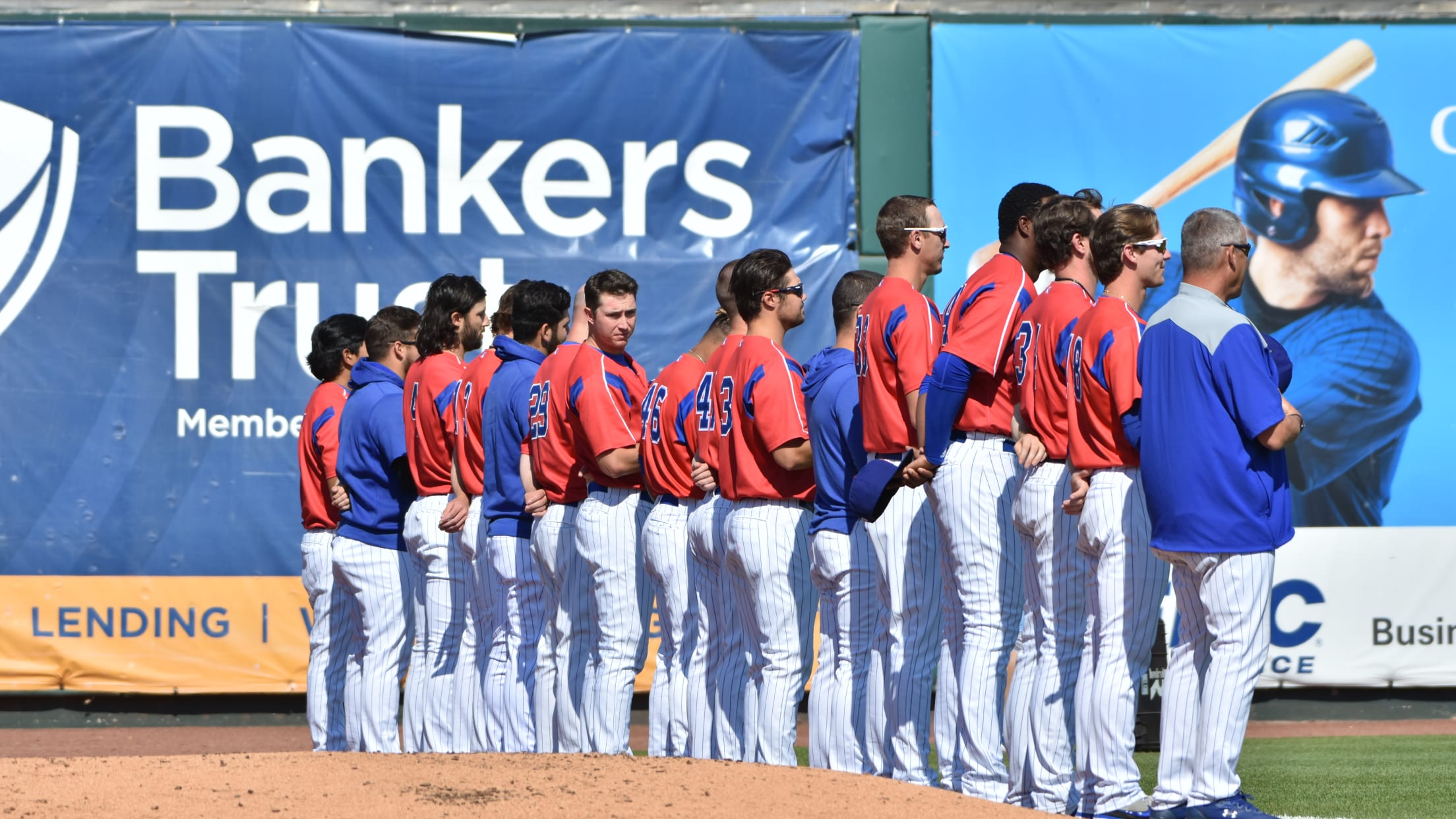 Principal Park opened in 1992, built on the same site where its predecessor, Sec Taylor Stadium, had stood. The new facility retained the Sec Taylor name through 2003, continuing to honor the longtime sports editor of the Des Moines Register. The Principal Park moniker was adopted in 2004, the result of a naming rights deal with Principal Financial Group.

Its no wonder that Principal Park was built in the same location as its predecessor, as it's a beautiful spot for ballpark that boasts some of the best in-game views in Minor League Baseball. It's situated in downtown Des Moines at the confluence of the Raccoon and Des Moines Rivers, with the former running past the first-base side of the facility and the latter flowing just beyond the outfield. 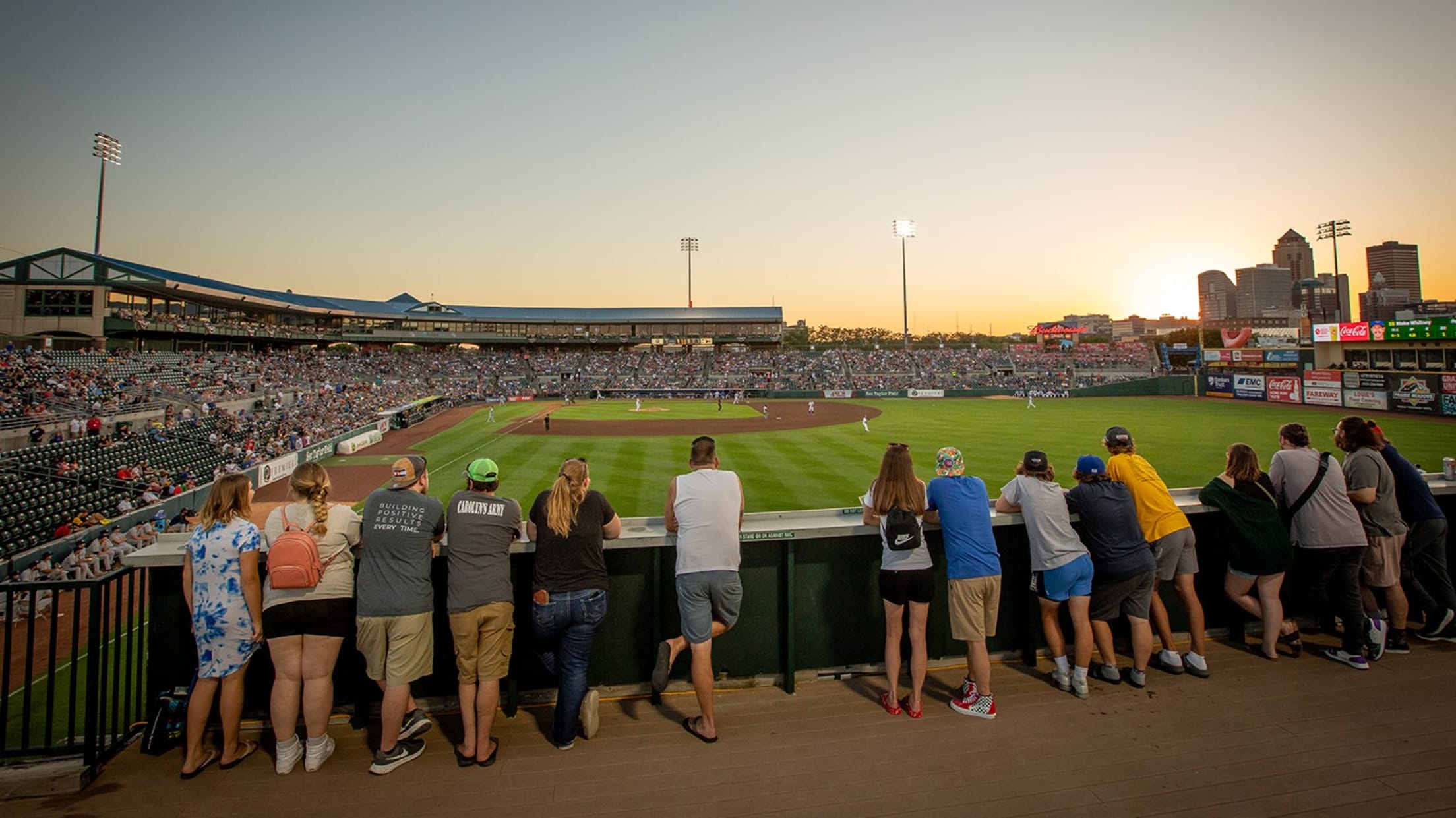 Fans take in an I-Cubs' game at Principal Park with the Des Moines skyline in the distance.

The Des Moines skyline looms beyond the ballpark, with most of the buildings concentrated in the left-field corner. The Iowa State Capitol building, topped off with a gleaming spire-topped dome, is located past center field. The State Capitol building is less prominent than it once was from within the stadium, thanks to the addition of an expanded batter's eye that protects hitters from the glare of the dome. It is now visible from the 10th row of seating and above. 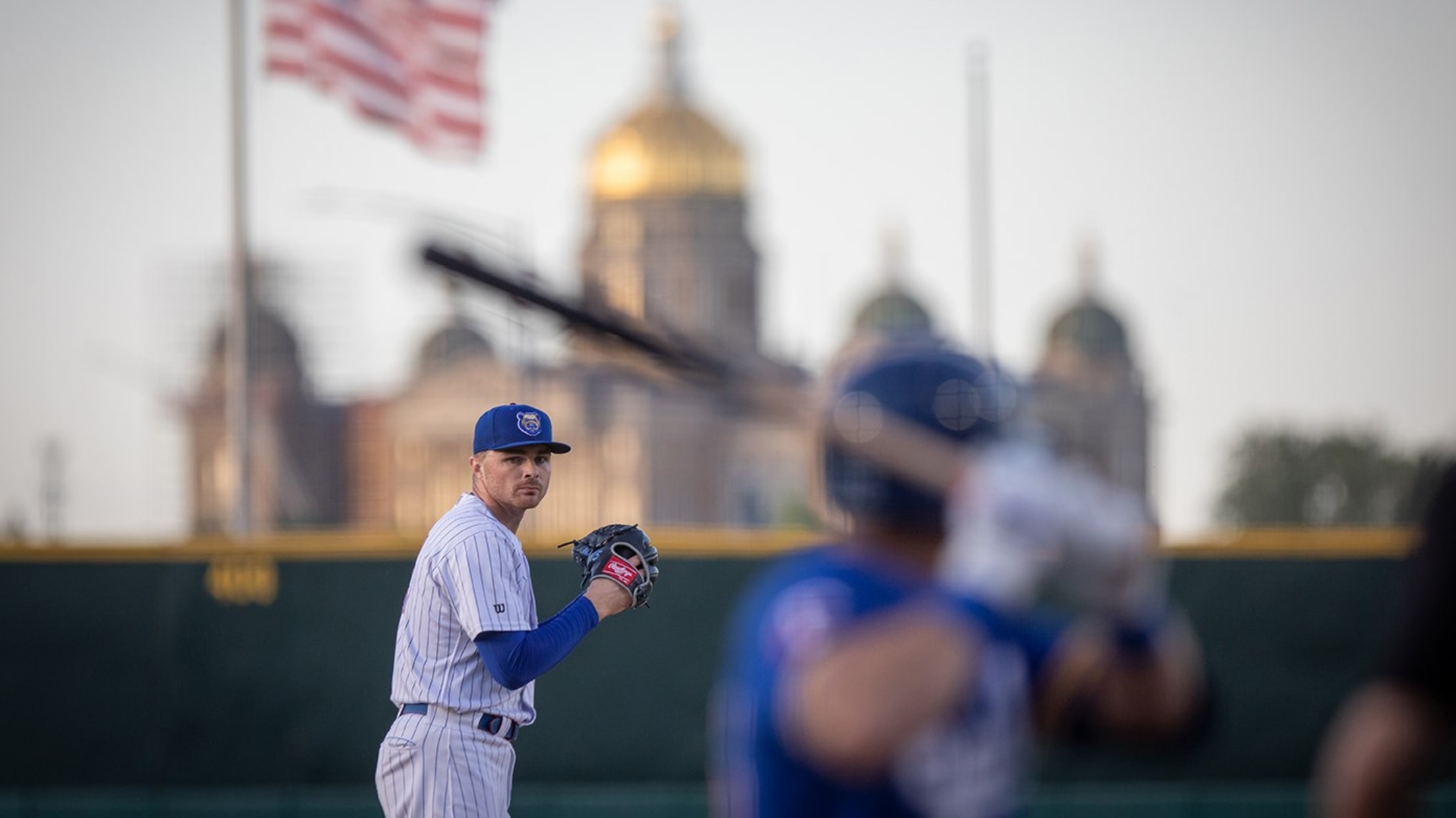 The Iowa State Capitol Building, as it looked prior to the installation of a new batter's eye.

Principal Park is picturesque from the outside as well. Well-manicured pathways, dotted with public art works and adjacent to a grassy riverbank, lead to the front entrance. Four large parking lots flank the ballpark, behind it and on the third-base side, but those staying in downtown Des Moines may find it easier to walk. The I-Cubs encourage fans to bike to the ballpark as well; Gate D, on the home-plate side of the ballpark, has space for cyclists to park their rides.

With room for 11,500 fans, Principal Park boasts one of the largest capacities in Minor League Baseball. The seating bowl, bisected by a concourse walkway, runs from foul pole to foul pole. Left field is home to the Betfred Sports Lounge, a climate-controlled bar and restaurant. Tables can be procured as past of a food and beverage-inclusive ticket package, but fans with tickets in other areas are also welcome to visit. 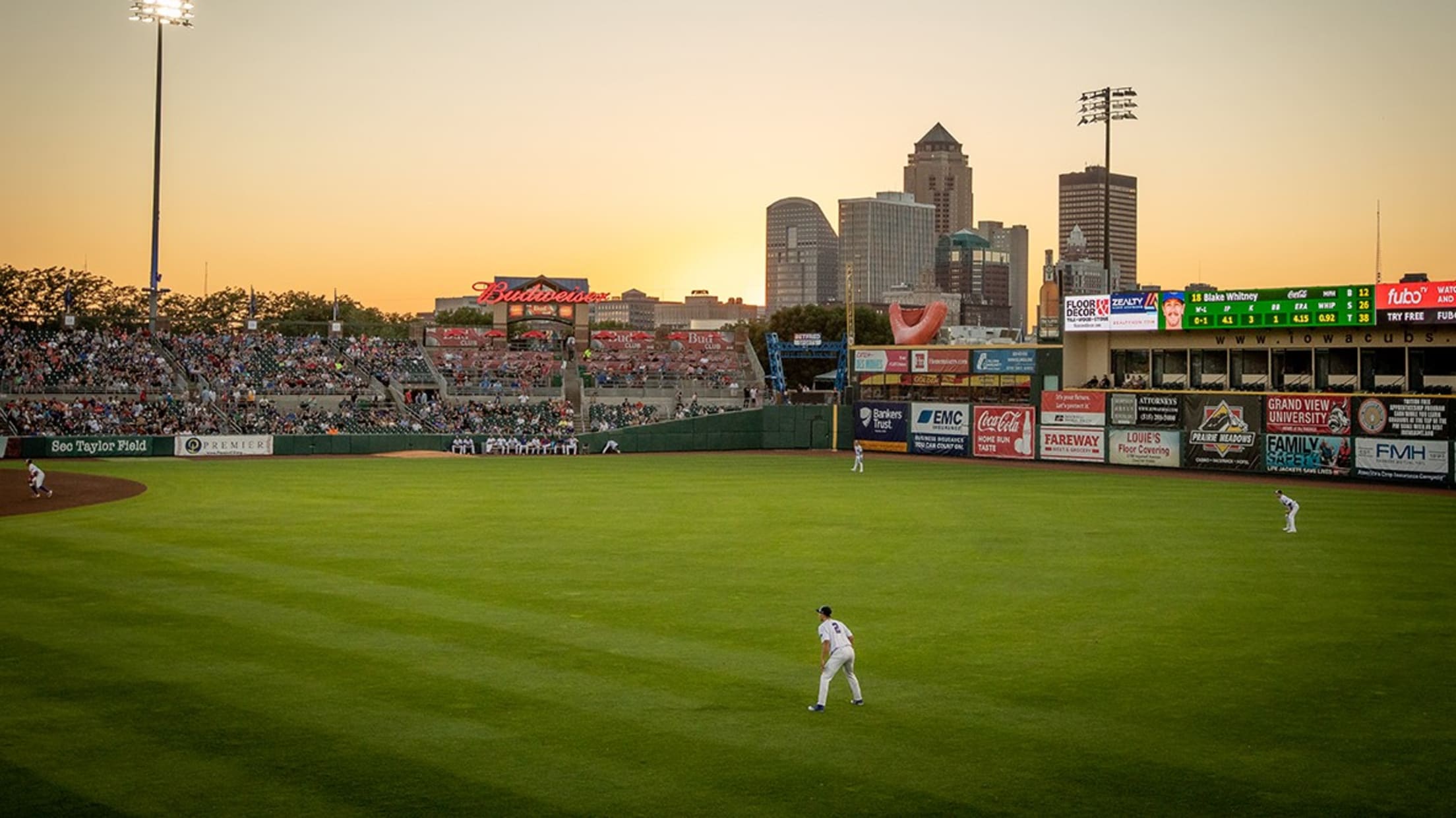 The Right Field Party Deck, a group area, includes a section of bleacher seating located beneath the scoreboard. The external concourse, running behind the ballpark, is home to myriad concession stands, restrooms and the team store. The First Amendment is prominently displayed on the first-base side of the concourse, posted there by former owner Michael Gartner (a Pulitzer Prize-winning journalist who owned the team from 2001-21). Gartner's civic-minded legacy also continues via the I-Cubs' annual July 4th citizenship ceremony, in which individuals from all over the world formally obtain status as legal permanent residents. 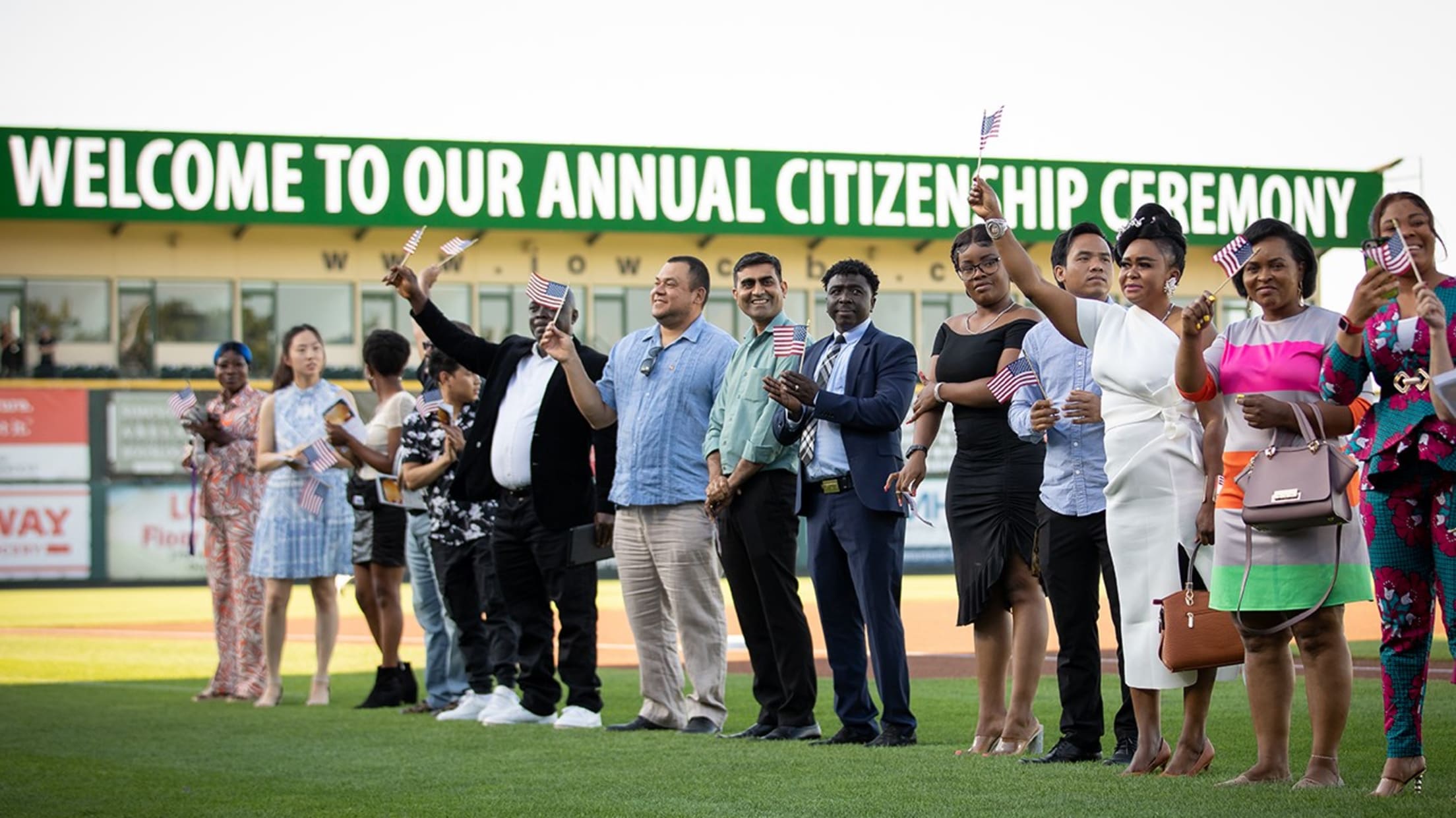 One of the most popular spots in the ballpark, particularly for young fans and even more particularly on hot summer days, is the splash fountain in the right-field corner. Kids also flock to the two-story play area in the right field concourse, featuring a tube slide that swings outside of the ballpark before coming back inside for the exit.

If it's an election year, you might have the chance to mingle with a presidential candidate at Principal Park. Each of the last three presidents (Obama, Trump, Biden) visited the I-Cubs in the lead-up to the Iowa Caucus. In 2019, the team paid homage to its state's "first in the nation" voting status by revealing an Iowa Caucuses alternate identity. 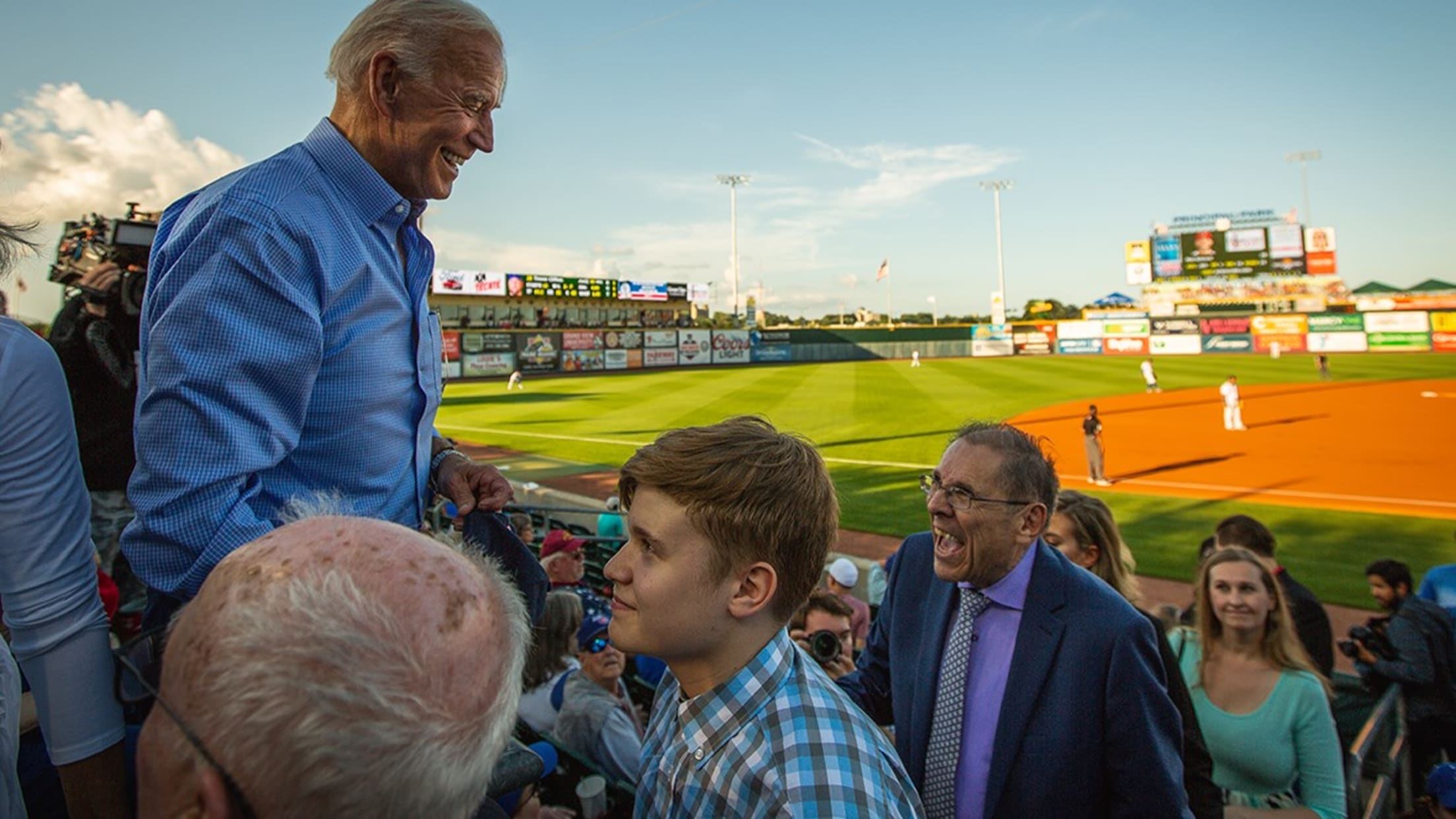 Those looking for a taste of Iowa should visit the Hot Corner concession stand for a pork tenderloin sandwich, featuring a breaded and fried meat patty far larger than the bun it is served upon. Des Moines is home to the Iowa State Fair, which takes place over 11 days in August. Fans can obtain fair fare all season long at the State Fair Snack Stand, which serves up specialties like hand-dipped corn dogs and pulled pork grilled cheese sandwiches. If you're torn between dessert and an alcoholic drink, split the difference with an order of Sweet N Boozy ice cream. 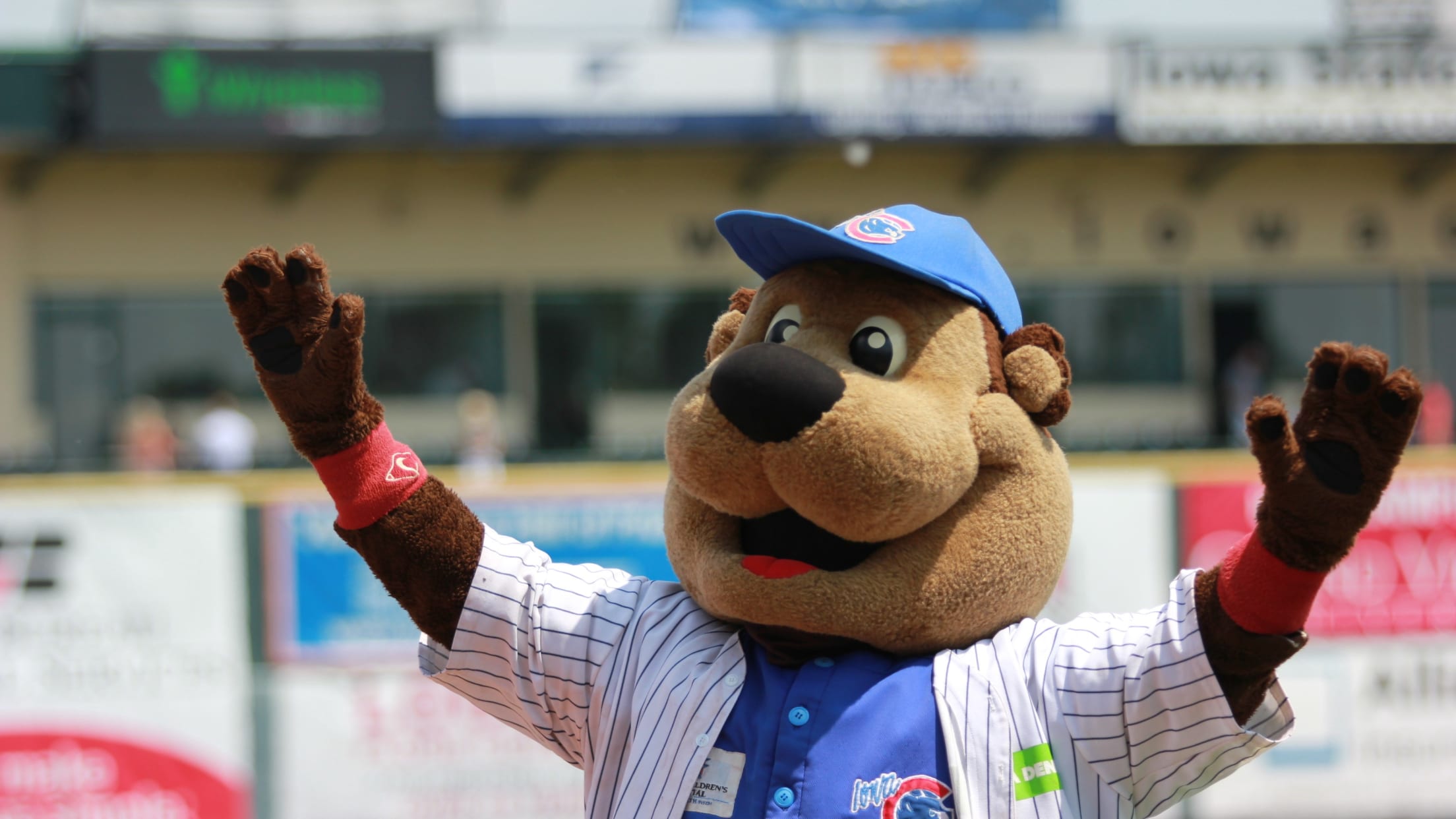 The Iowa Oaks changed their name to the Cubs prior to the 1982 season, and as soon as they did so Cubbie Bear arrived on the scene. Cubbie may hibernate during the winter, at least when he's not doing community appearances, but during the baseball season he's a constant and much sought-after presence at Principal Park.

After seeing the Iowa State Capitol building from a distance during an I-Cubs game, why not schedule a tour to see it up close? Numerous statues and memorials are located nearby, as well as the State Historical Museum of Iowa. The John and Mary Pappajohn Sculpture Park, located on the western edge of downtown, showcases 28 sculptures by a wide variety of prominent artists.

If possible, combine a trip to Principal Park with a visit to the aforementioned Iowa State Fair. In addition to deep-fried snacks, highlights include annual "Biggest Boar" and "Ugliest Cake" competitions. If you're looking to see cubs of a different sort, check out the Blank Park Zoo. If you're more partial to curios, ephemera, knick-knacks and whatnot, then wile away the hours at the Brass Armadillo Antique Mall.

Another retail destination is Raygun, located in Des Moines' East Village. If you like T-shirts emblazoned with all manner of snarky, self-aware pop culture, sports and politics-related slogans, then perhaps you'll agree with Raygun's humble self-assessment: "The greatest store in the universe."

As befits a downtown facility, there are plenty of places to eat and drink before and after a game. Options include, but are far from limited to, El Bait Shop (wide-ranging menu, hundreds of craft beers), Hessen Haus (German food, hundreds of beers) and The Royal Mile (British-style pub).

Snookies Malt Shop, located in Des Moines' Beaverdale neighborhood, is a summertime institution specializing in ice cream, milkshakes and, of course, malts. Classic Frozen Custard, on the Southside, is less prominent in the Des Moines dessert scene. But a local in the know says that the quality of its ice cream always makes it worth the visit.

(The "local in the know" is Scott Sailor, longtime I-Cubs front office denizen. Thanks to Scott for providing information and recommendations that enlivened this Ballpark Guide throughout.)

So it goes with food and drink options, so it goes with hotels: Principal Park's downtown location results in a plethora of nearby options. The closest hotels are just a couple blocks from the ballpark, and there are plenty of others within a walk or short drive.

From Des Moines, the closest Minor League team is the Cedar Rapids Kernels of the Midwest League. From there, it's a comparatively short drive to a trio of other MWL entities: the Quad Cities River Bandits, Peoria Chiefs and Beloit Sky Carp. If you're looking to stay at the Triple-A Level, head west toward the Omaha Storm Chasers or north to the Saint Paul Saints (and their nearby parent club, the Minnesota Twins).

The I-Cubs are the only Chicago Cubs farm team who play west of Chicago. Before making it to Des Moines, the system includes stops in South Carolina, Indiana and Tennessee. 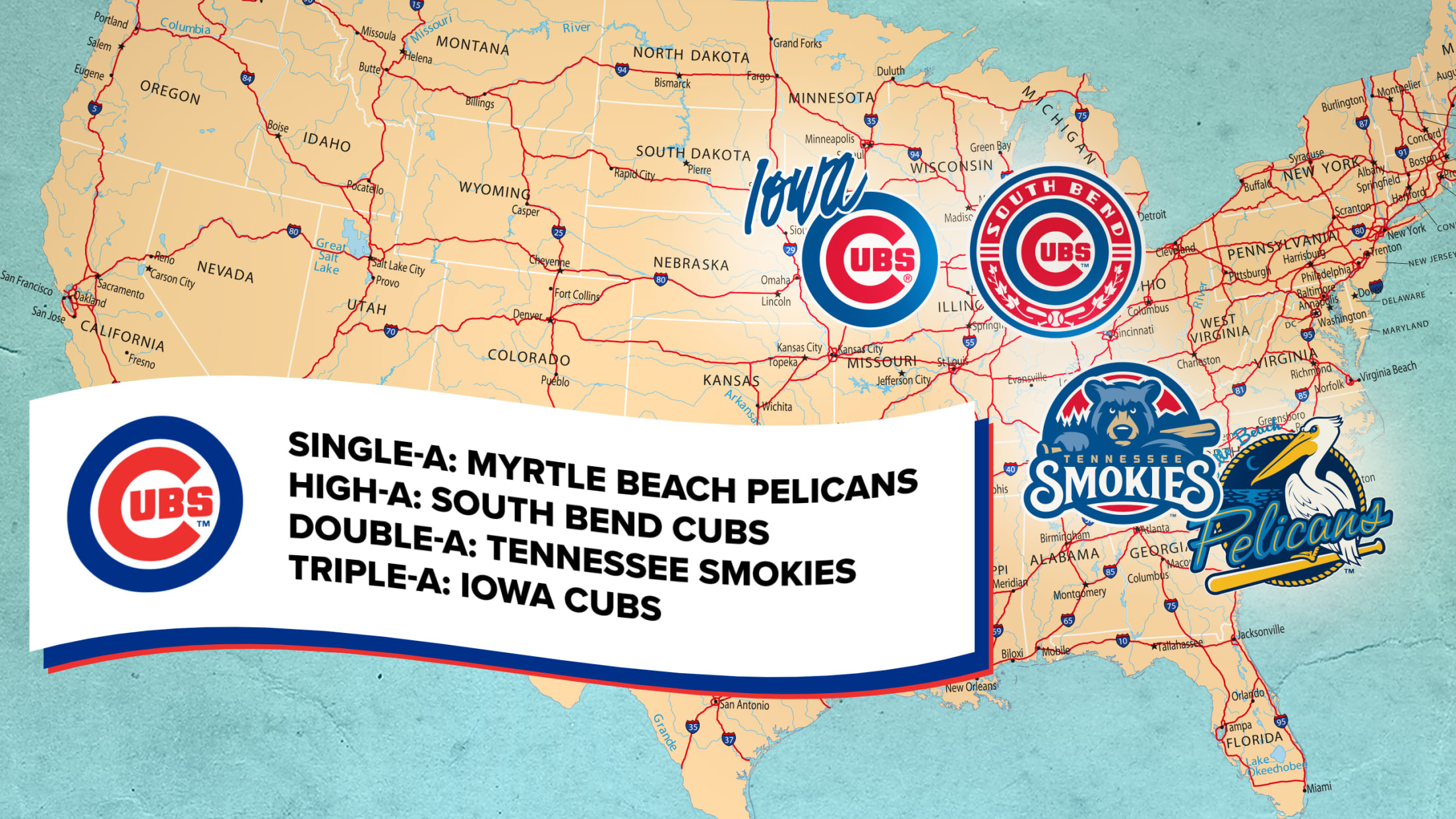