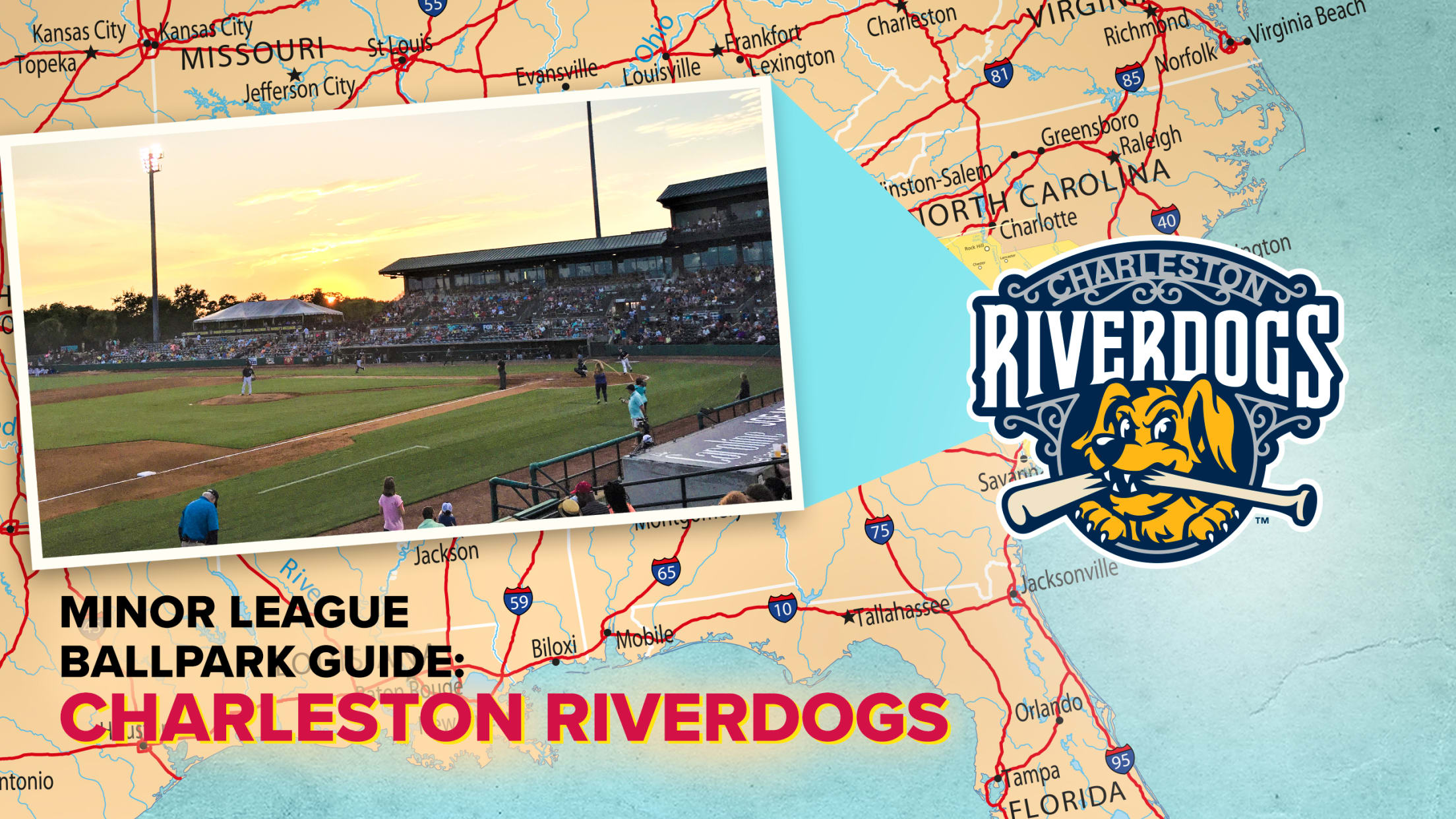 Welcome to Charleston's Joseph P. Riley Jr. Ballpark, known simply as "The Joe." This has long been one of Minor League Baseball's most irreverent environments, presided over by "Director of Fun" Bill Murray. 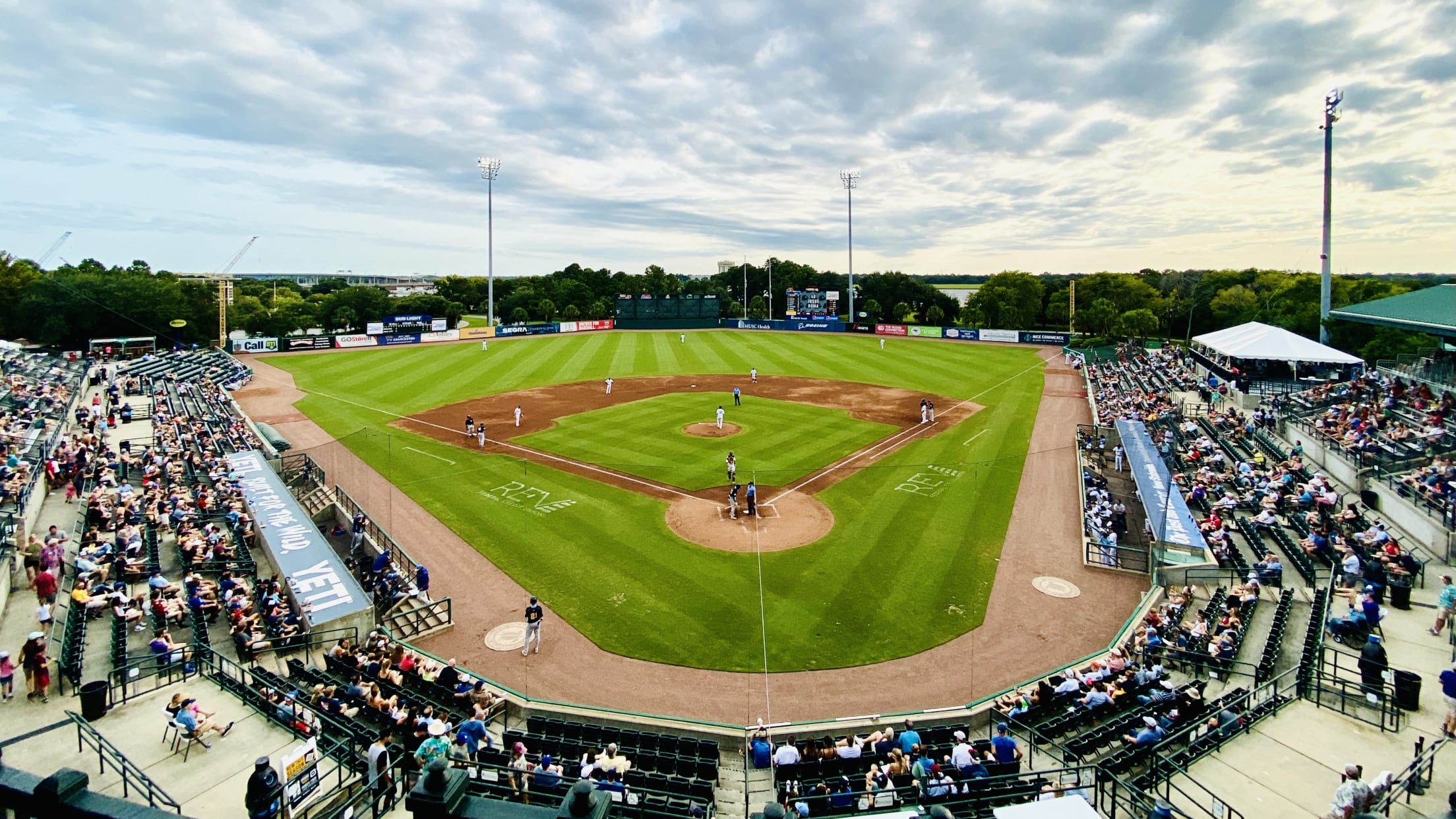 Charleston, S.C., is the home of Fort Sumter, where the Civil War began in 1861. This essentially marked the start of the city's baseball history as well, as the game was popularized in the region by Civil War soldiers. (While Abner Doubleday may not have invented the game of baseball, he was Union soldier stationed at Fort Sumter.) Charleston's first professional team debuted in 1886; since then, far more often than not, a Minor League Baseball team has called the city home. 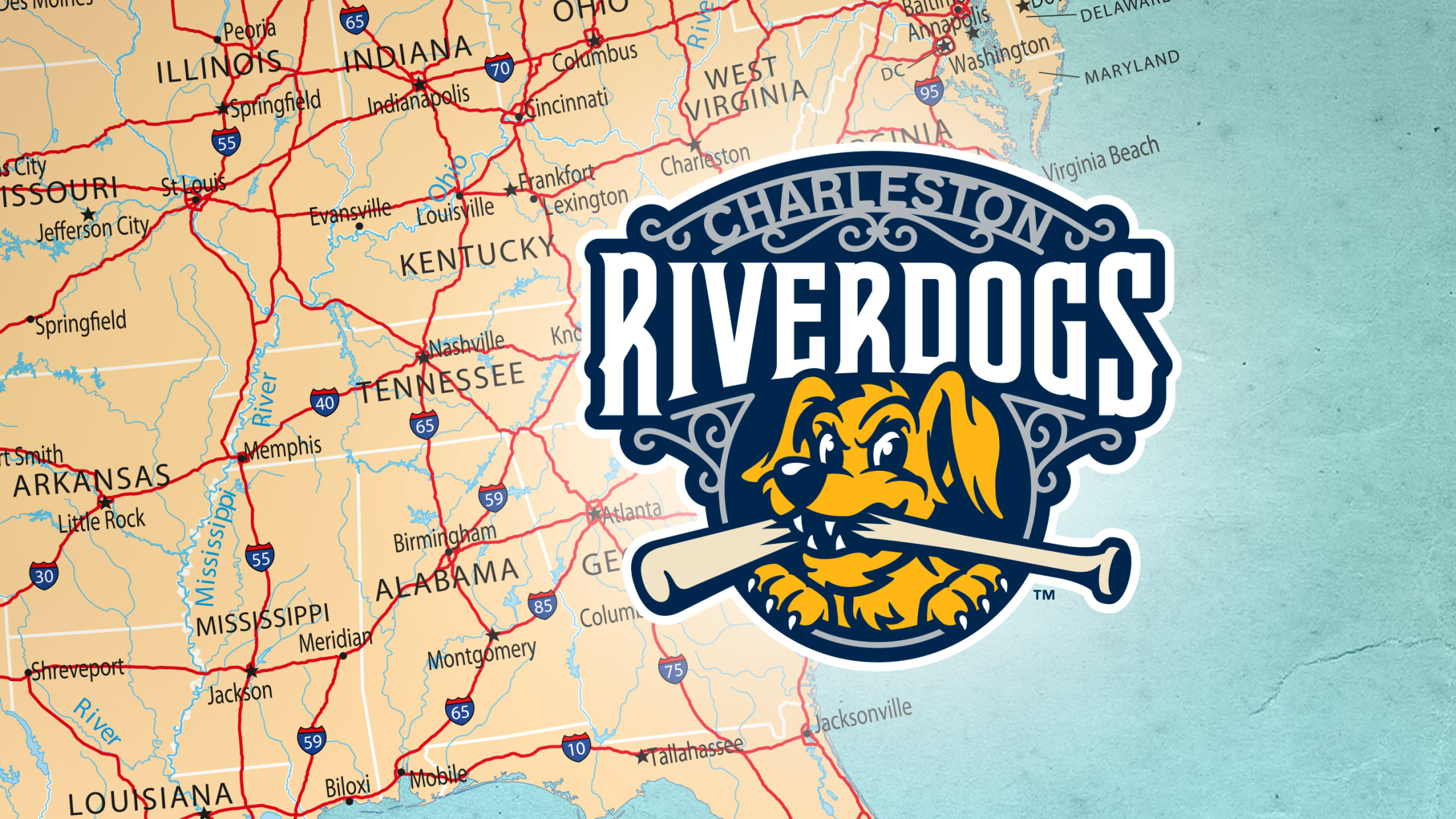 The current iteration of Charleston's team arrived on the scene in 1980 as the Charleston Royals. The name was changed to the Rainbows in 1985, in conjunction with an affiliation switch from Kansas City to San Diego. The RiverDogs' moniker, a reference in part to Charleston's location at the convergence of the Ashley and Cooper Rivers, was adopted in 1994. Three seasons later, the team moved into its current home of Joseph P. Riley, Jr. Ballpark.

In 2021, following 17 seasons with the Yankees, the RiverDogs became a Tampa Bay affiliate. This marks their second go-round with the Rays, with the first occurring from 1997-2004. 2021 also saw the franchise's first championship, as well as the first season in which the team played outside of the South Atlantic League. That circuit, referred to as the Low-A East in 2021, is now known as the Single-A Carolina League. 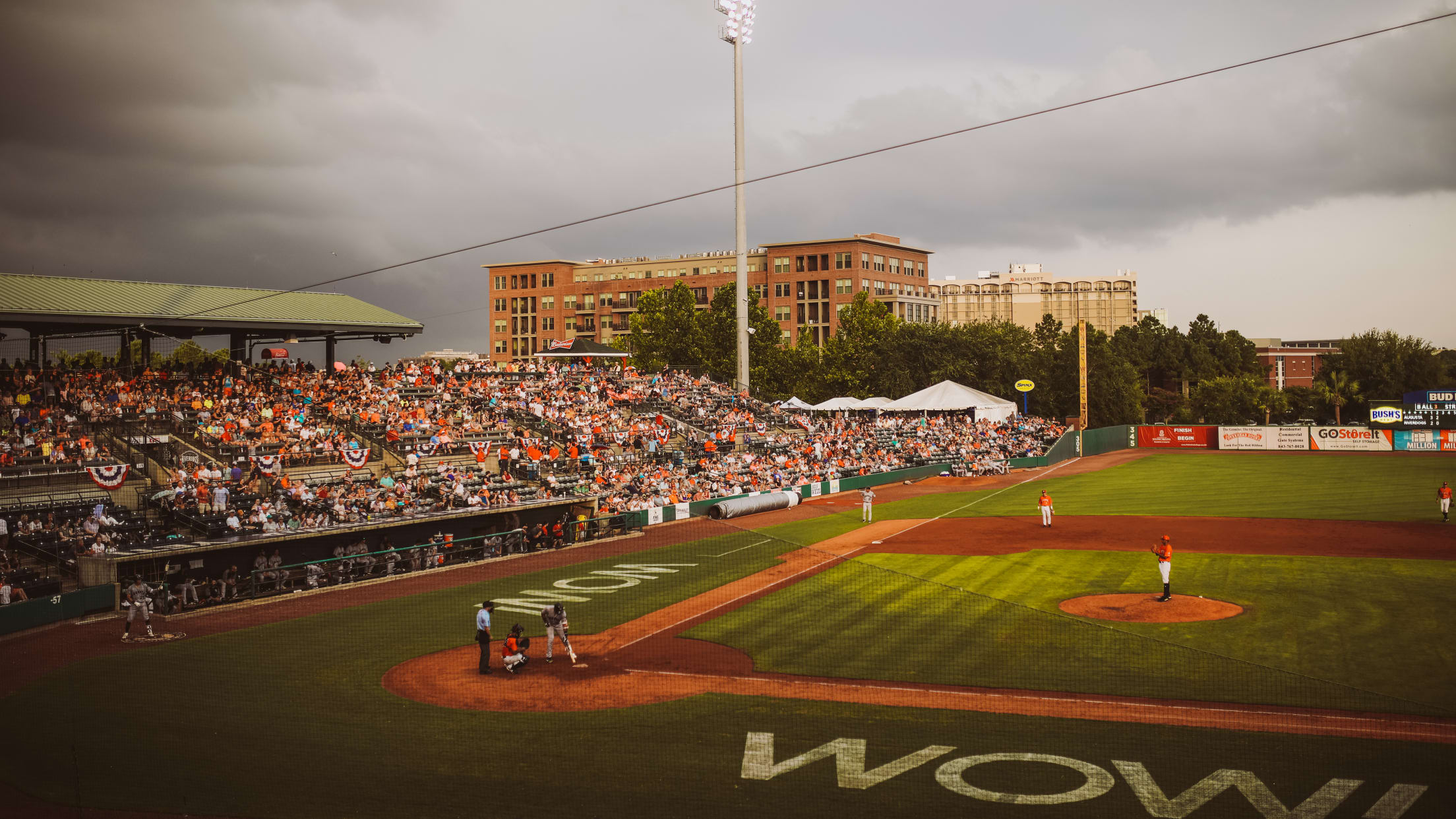 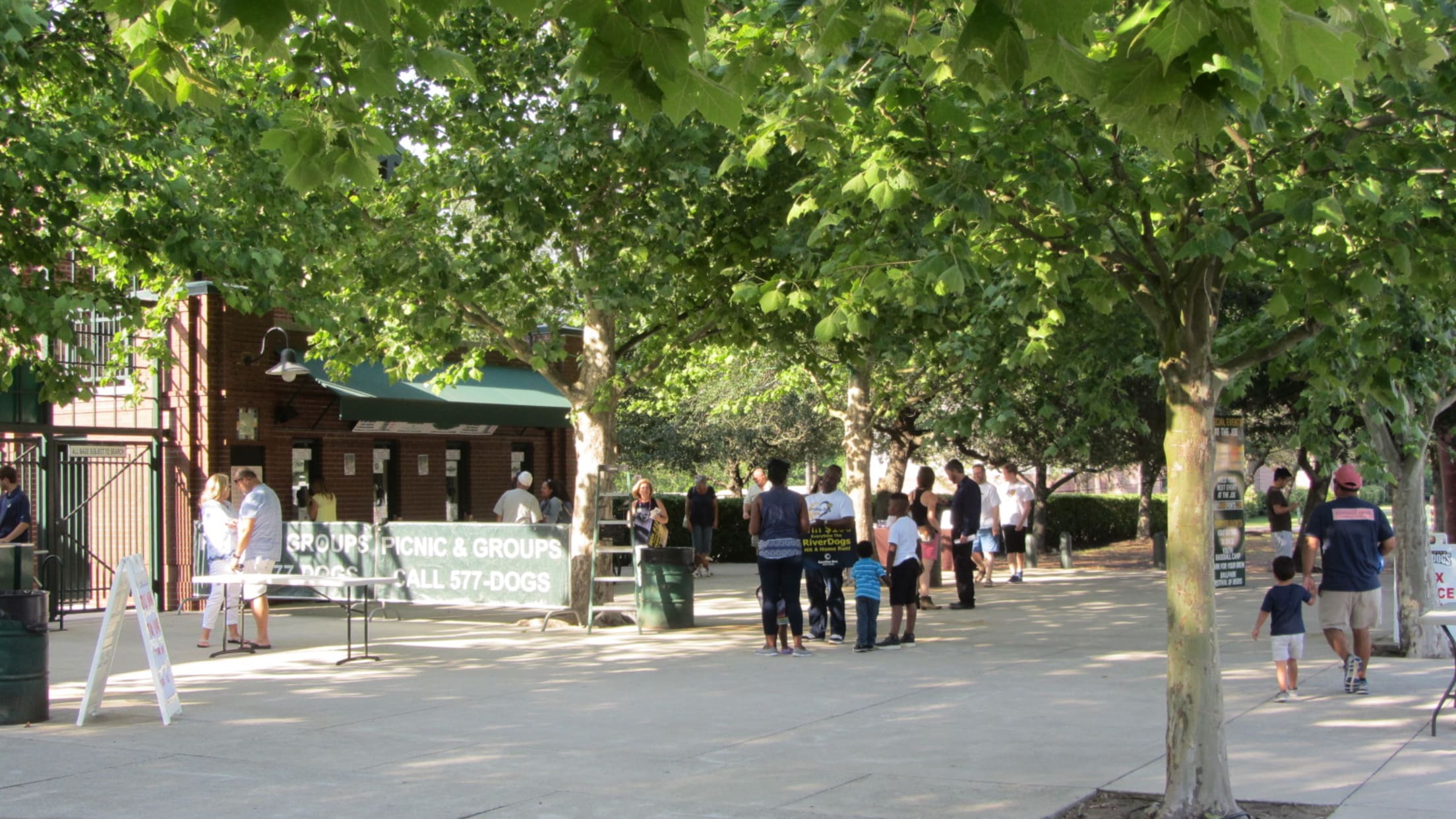 From 1940 through 1996, Charleston's various Minor League Baseball teams played at College Park. That facility is now owned by The Citadel, who utilize it as a practice facility for their Bulldogs baseball team. The Citadel received College Park as part of a land swap; in return the city of Charleston received a plot of land located on the banks of the Ashley River in the city's Westside neighborhood. This is where Joseph P. Riley, Jr. Ballpark was constructed. Since 1997 it as served as the home of the RiverDogs as well as the Citadel Bulldogs.

The ballpark, often referred to simply as "The Joe," was named after former Charleston mayor Joseph P. Riley, who played a large role in making it a reality. The Joe has long been renowned for having one of Minor League Baseball's most boisterous and irreverent atmospheres, largely due to a "Fun is Good" front office philosophy instilled by an ownership group that includes Mike Veeck (son of legendary baseball executive Bill Veeck) and Bill Murray (no introduction needed). Murray, who owns a house in Charleston, visits "The Joe" on a regular basis and is listed on the RiverDogs' staff page as "Director of Fun." Nice work if you can get it. 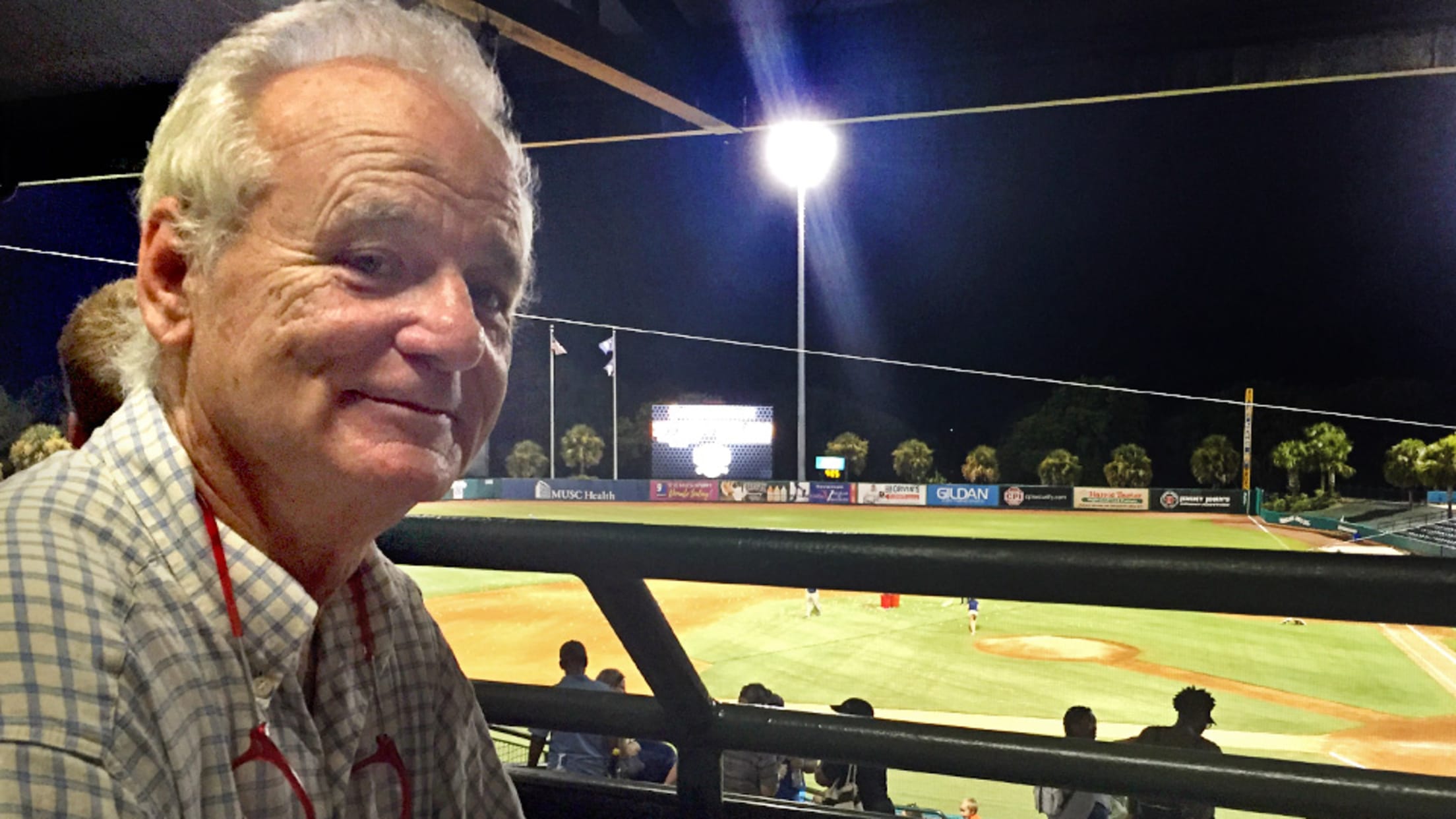 RiverDogs Director of Fun Bill Murray, in his element.

The ballpark's front entrance sits behind a tree-lined sidewalk. Upon entering the facility one must leave the lush vegetation behind, but natural beauty still abounds. The Ashley River, which looks particularly beautiful as the sun sets, are visible from the main concourse. That concourse, wide and spacious, rings the facility from roughly foul pole to foul pole. The seating bowl is bisected by a narrow, secondary concourse, with numerous group areas incorporated throughout.

More recent additions include The Dogout and The Segra Club. The former is a smaller group area located atop the concourse adjacent to the press box, the latter a premium area with floor-to-ceiling windows overlooking the Ashley River wetlands. 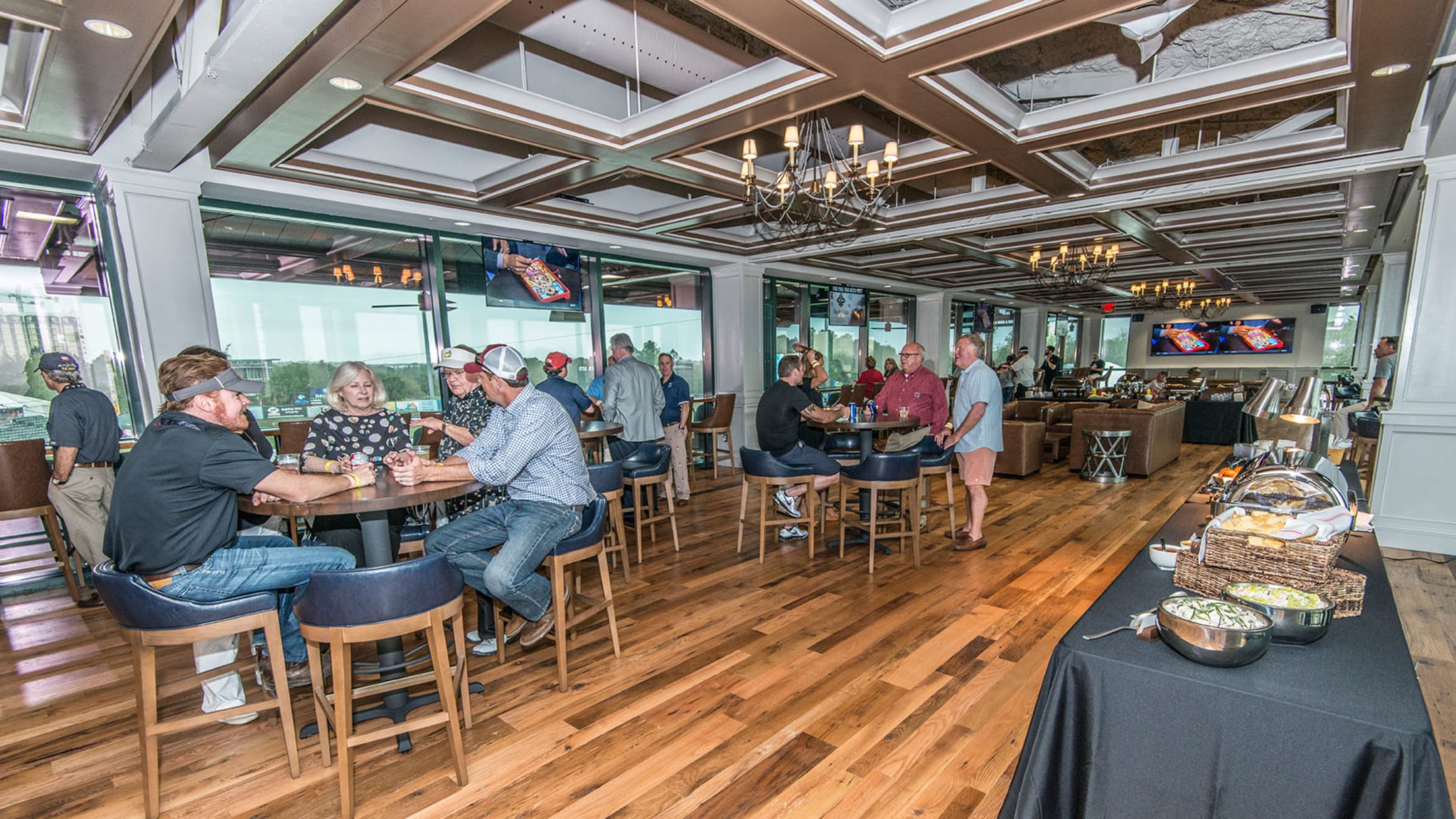 In addition to an abundance of the basics, the RiverDogs have long had a reputation for culinary creativity. Over the years the team has served up pickle dogs, beer shakes and myriad forms of unorthodox sausage, to name just a few of their many innovations. Speaking of sausage, visit the Wicked Sausage Stand down the left field line for a Man Salad, a 10-ounce German-style pretzel served with three kinds of sausage and Wicked Weed beer cheese. The Tacon Pie stand features its namesake item (taco filling inside of a pie shell) as well as the heartily-portioned Kitchen Sink Nachos. Joe's Shrimp Shack, located behind home plate, serves up Mexican street corn Po Boys, shrimp rolls and the Stadium Fish Stick (a foot-long battered cod filet served on a stick).

When in doubt, go with the RiverDogs signature item. That would be The Homewrecker: a hot dog topped with cole slaw, pimento cheese, pickles, okra and barbecue sauce. 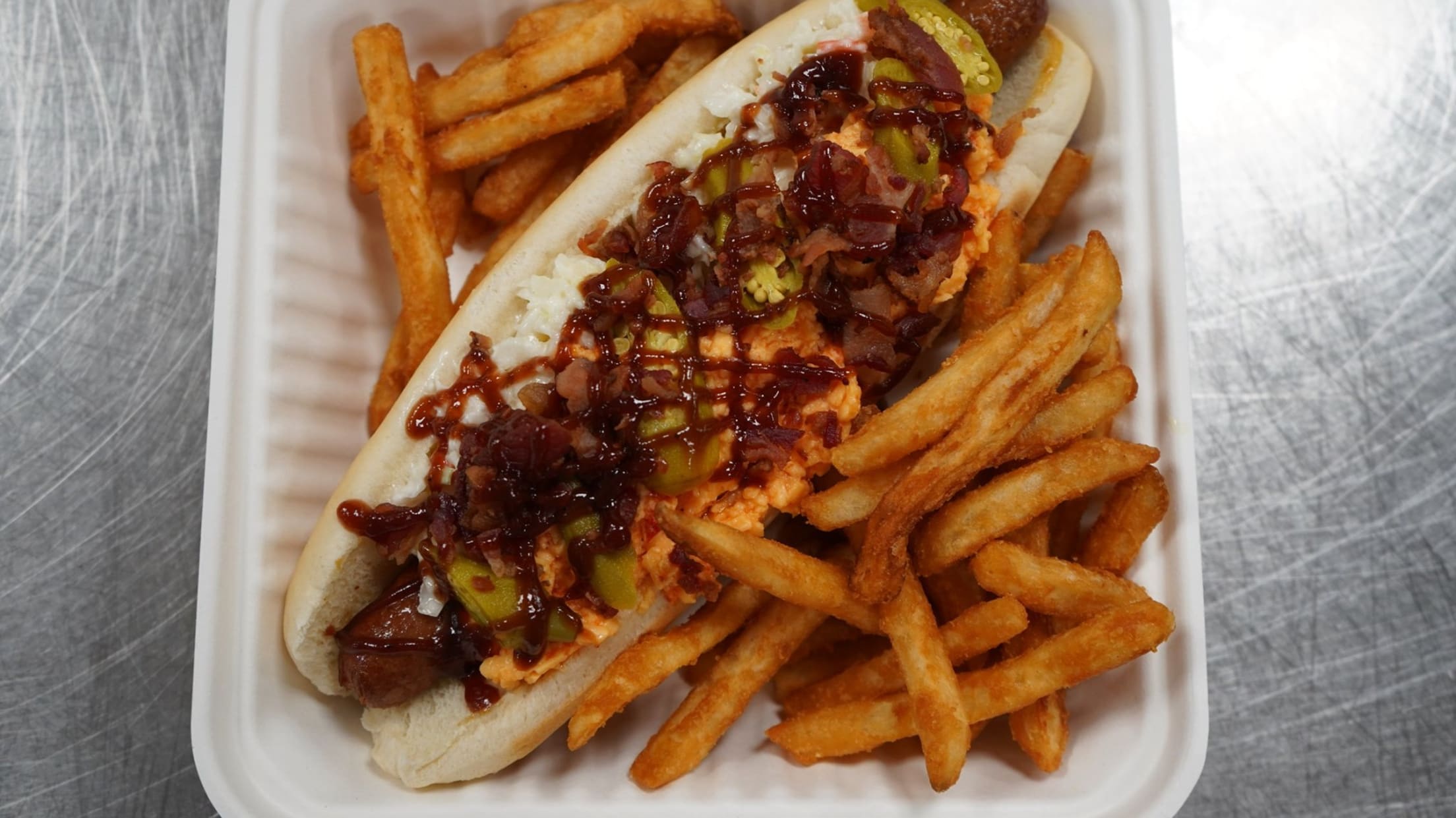 Charlie T. RiverDog arrived on the scene in 1994, the same year that the RiverDogs' name debuted. Charlie is, of course, a dog. He considers himself to be "fan's best friend," and as such spends his time at the ballpark interacting with those in the stands. In recent years Charlie has been joined at the ballpark by many of his canine pals, who are granted entry for Tuesday "Dog Days" promotions. 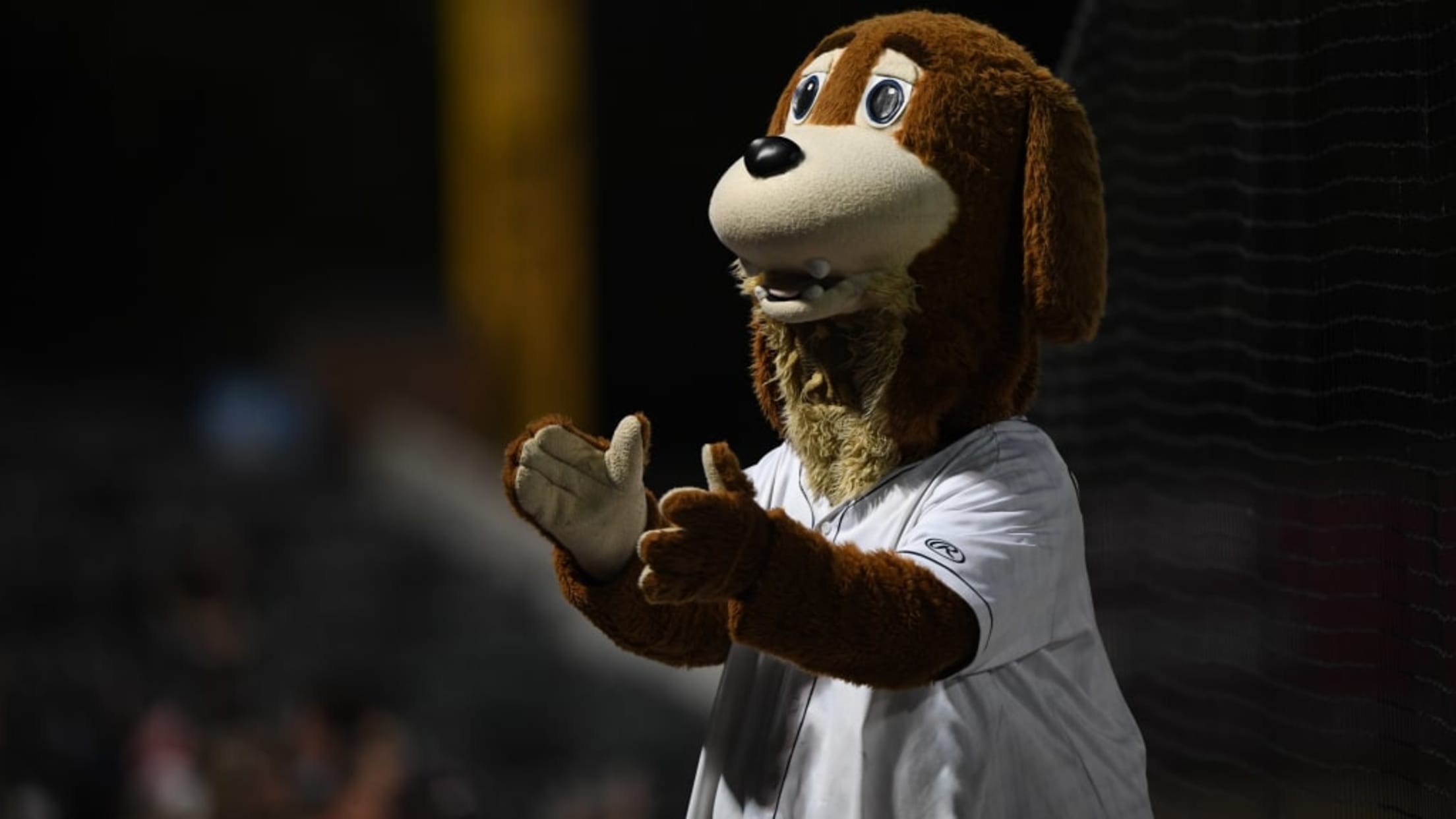 Shots fired! The Civil War began at Fort Sumter, which can be visited via a boat tour that also passes by Battery Park, the Arthur Ravenel, Jr. Bridge and Fort Moultrie. For a more mysterious aquatic adventure, visit the Hunley. This combat submarine disappeared in 1864, shortly after completing the first successful combat submarine mission. It was finally found in 1995 and raised out of the water in 2000. Patriots Point Naval and Maritime Museum utilizes the WWII aircraft carrier USS Yorktown as its centerpiece.

Charleston's rich history, and gorgeous architecture, can further be explored via guided walks, carriage rides and ghost tours. Or just visit the self-explanatorily Charleston Museum, dedicated to educating visitors about the "natural and cultural history of the South Carolina Lowcountry." Other popular destinations include the many vendors of the Charleston City Market and the South Carolina Aquarium.

Charleston's restaurant scene is unique and vast, offering endless opportunities to sample Lowcountry specialties like shrimp and grits and She-crab soup. Harold's Cabin, a corner store and restaurant, has close connections to the RiverDogs. It is run by former food and beverage director John Schumacher, and received financial backing from team co-owners Mike Veeck and Bill Murray. Beyond that, it's hard to know where to begin as there are over 150 restaurants in downtown Charleston alone. Hank's Seafood, located near the iconic local shopper's paradise that is the Charleston City Market, is a perennial favorite. Lewis Barbecue, where the meat is cut before your eyes and sold by the pound, is one of the city's best barbecue establishments.

There are several hotels located near the ballpark, to the south. But there are innumerable destinations throughout the city, not surprising given Charleston's year-round status as a tourist destination. Bigger spenders might want to search for a room at one of the city's many historic inns.

South Carolina has five Minor League Baseball teams, with the RiverDogs located the farthest to the south. Drive up the coast in a northeasterly direction in order to visit the Myrtle Beach Pelicans. The Augusta GreenJackets (located in North Augusta, S.C.), Columbia Fireflies and Greenville Drive are located to the northwest. Thinking bigger, a Carolinas ballpark road trip is always a good idea. North Carolina is home to 10 Minor League teams, more than any other state.

The Road to Tampa Bay

The RiverDogs are lowest rung on Tampa Bay's Minor League ladder. From there, prospects traverse to Kentucky, Alabama, North Carolina and, finally, The Show. 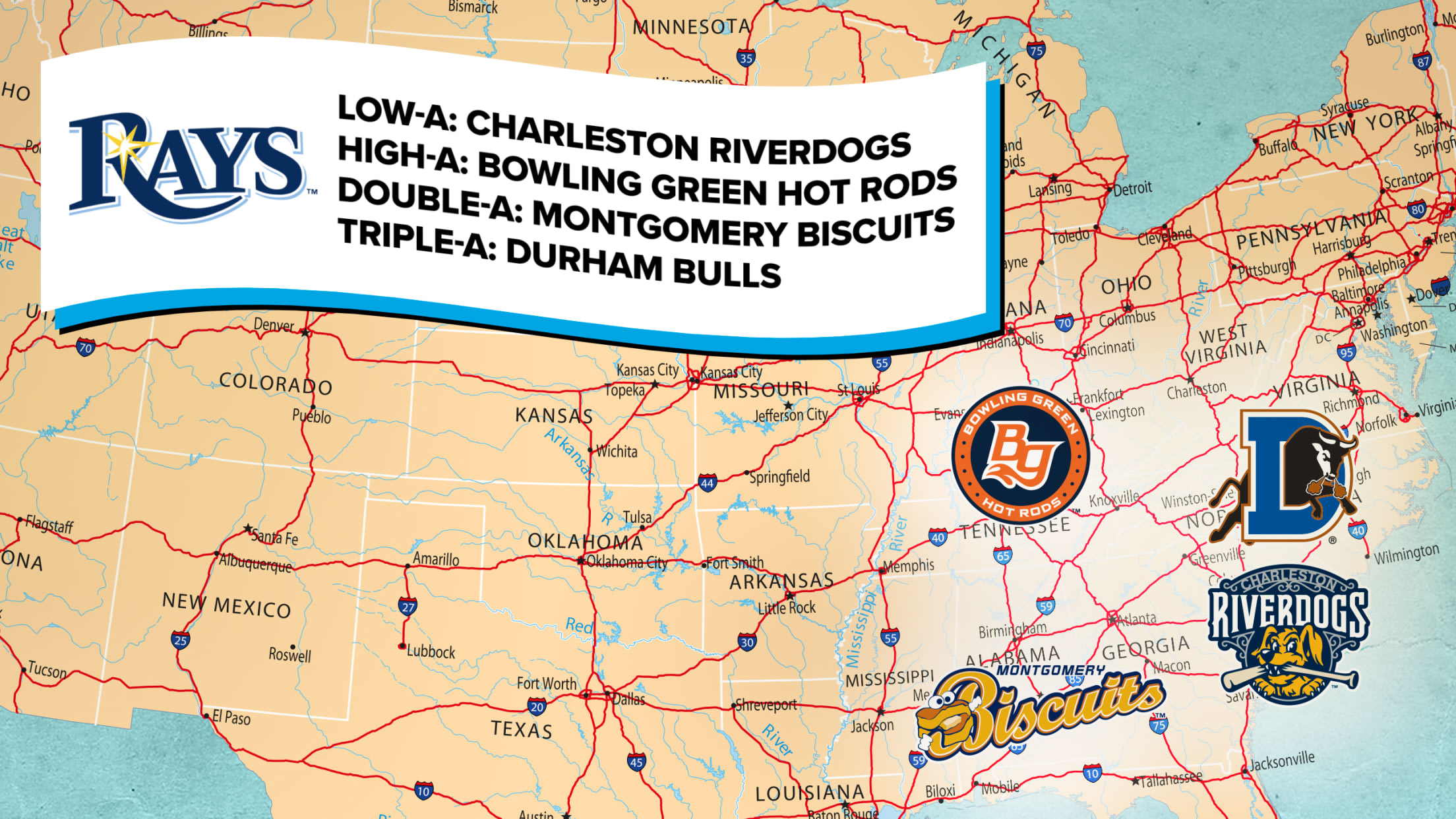