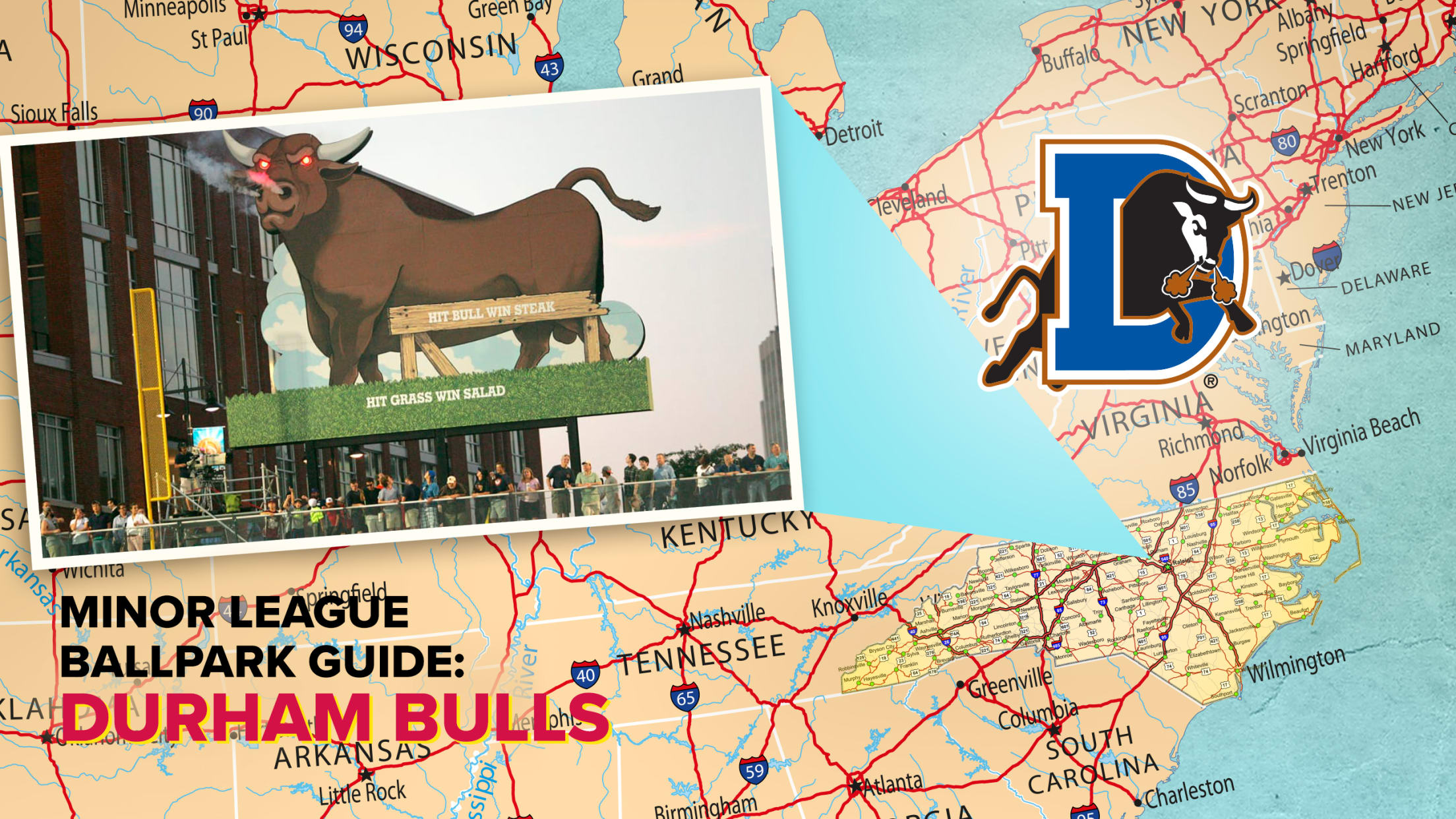 Welcome to Goodmon Field at Durham Bulls Athletic Park, where fans are greeted by a billboard-sized snorting bull above left field and the smoky smell of Carolina barbecue. Though not at the same location where the 1980s classic “Bull Durham” was filmed, the movie’s legacy lives on at the ballpark known as “the DBAP.”

The Bulls retired Chipper Jones' number at the DBAP in 2013. | Art or Photo Credit: Dano Keeney/MiLB.com

The Bulls trace their lineage back to 1902, when they took the field for a shortened season as the Durham Tobacconists. The club didn't return to action until 1913, while professional baseball found its footing in the region, reforming as the Durham Bulls and eventually becoming Major League affiliated in 1932. They’ve been a farm team for 10 MLB clubs, most notably the Braves (1980-97) and the Rays (1998-present). 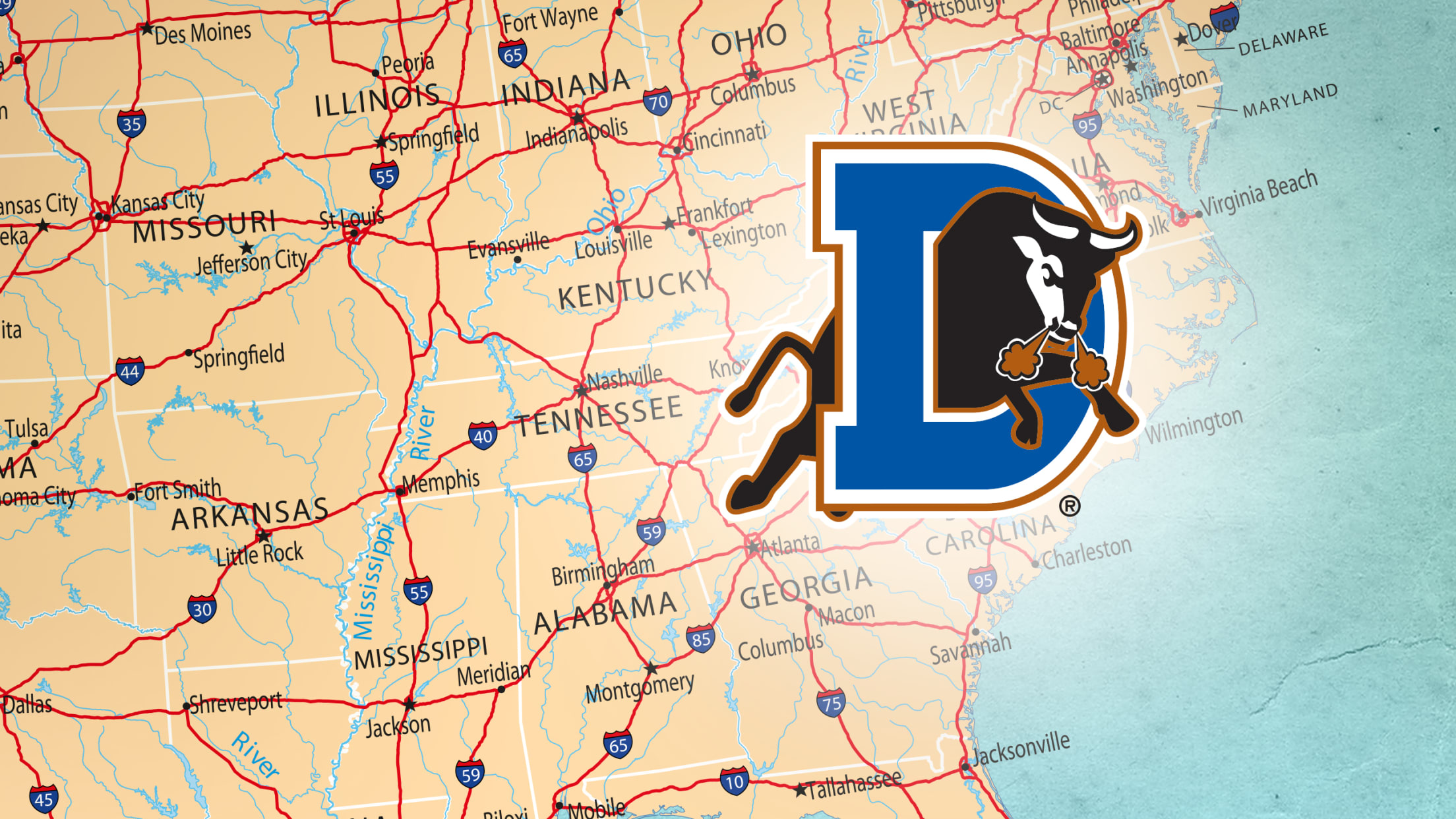 After going without pro baseball for most of the 1970s, Durham saw the Bulls return for good in 1980. But it wasn’t until the ballclub was featured on the big screen eight years later that the Bulls acquired national fame, forever changing the game-day experience in Durham.

The 1988 release of the rom-com hit “Bull Durham” renewed interest in the team just as ownership was raising funds to make the move up from High-A ball to Triple-A, one step away from the big leagues. Kevin Costner and Co. arrived for filming in late 1987, with the crew bringing along the mechanical bull and its “HIT BULL WIN STEAK” promotion for the movie. The film’s success led to record-setting attendance figures and an eventual move to Triple-A in 1998 with the arrival of the Tampa Bay’s expansion team. In recent years, the DBAP has been the place to see some of the top prospects in baseball, all while the Bulls collect Triple-A championships. 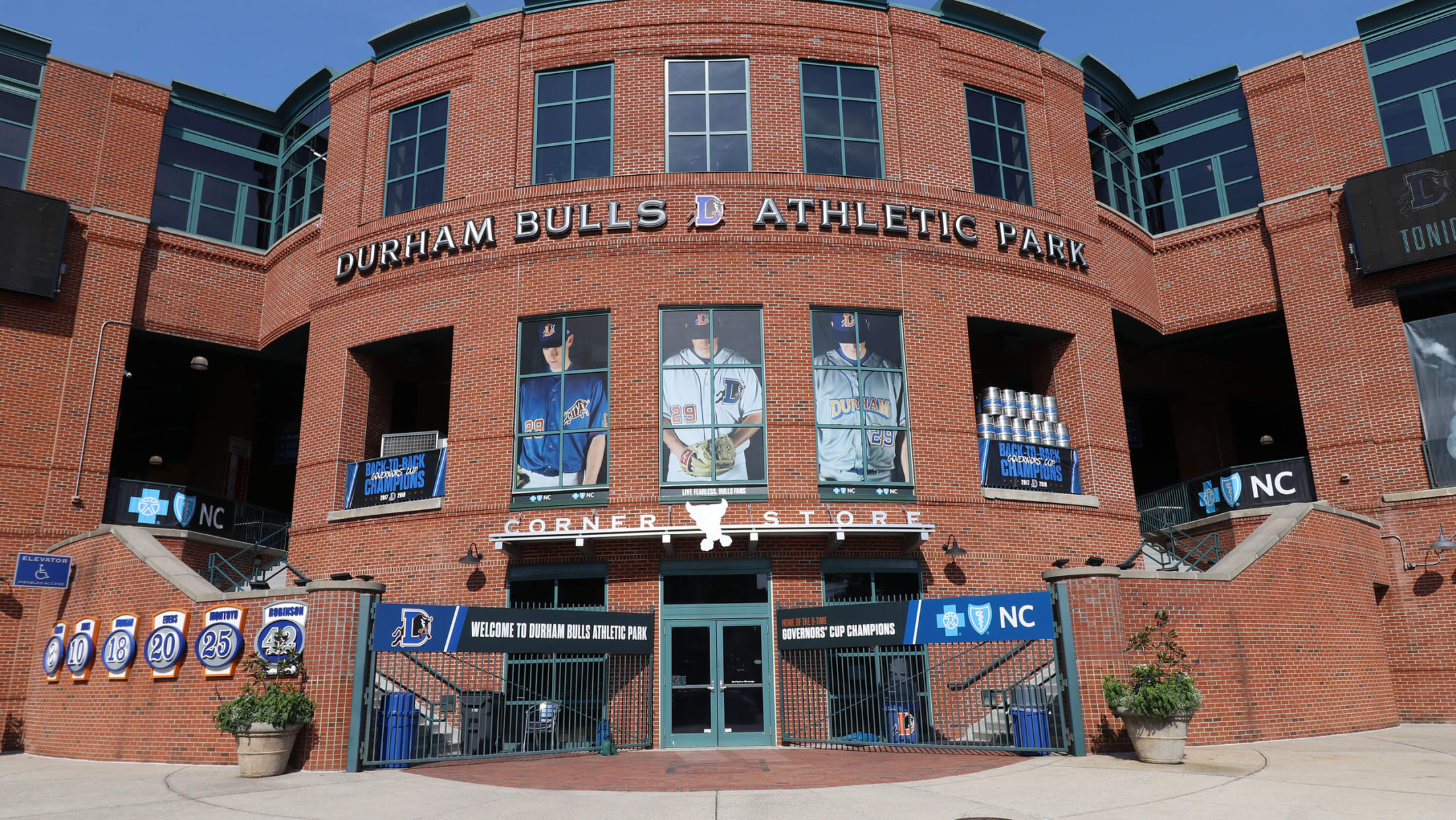 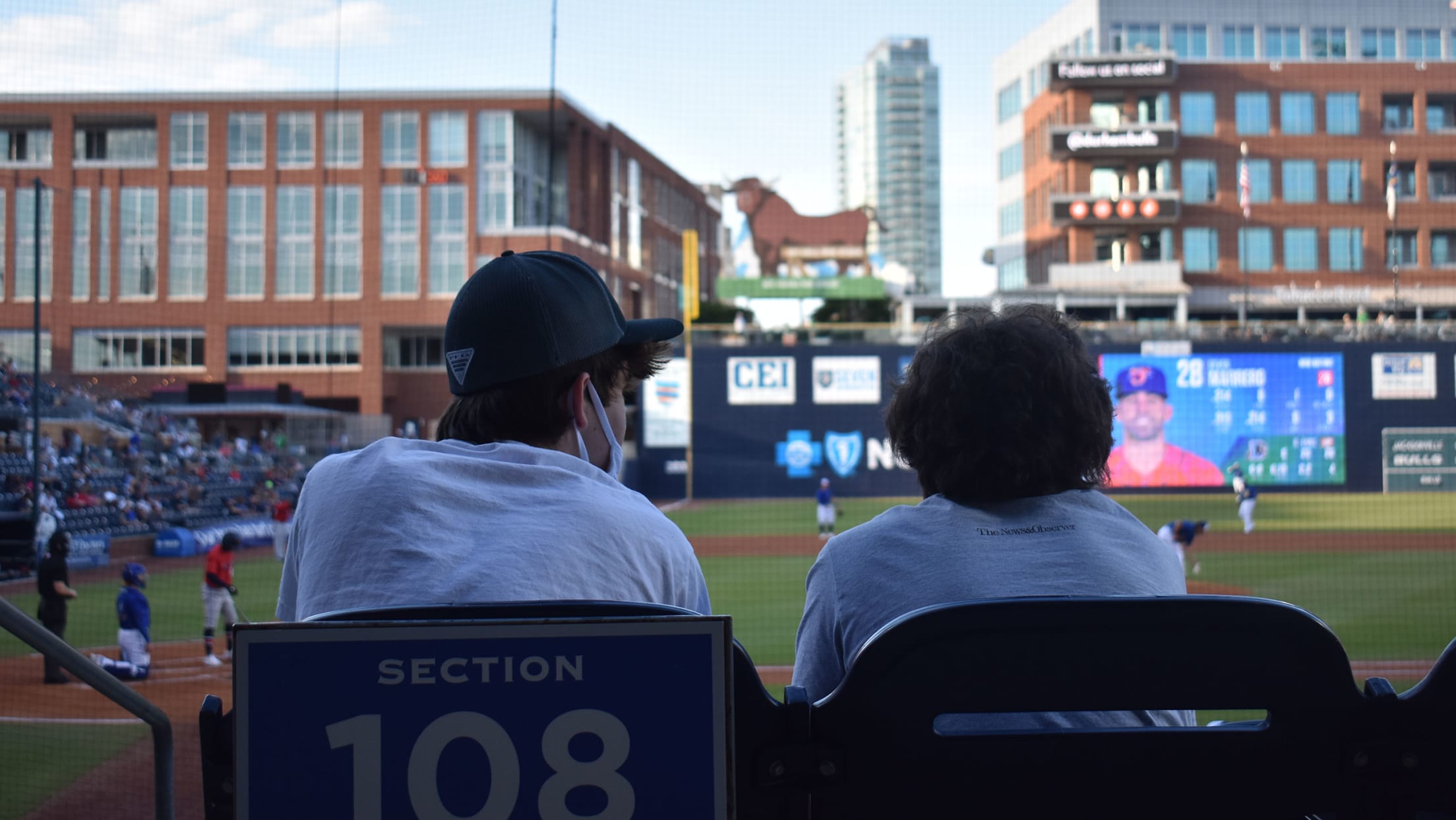 The DBAP (pronounced DEE-bap) opened in 1995 and is part of the American Tobacco Campus in downtown Durham, a modernized development on the site of a former tobacco factory. The ballpark has helped revitalize the area after that industry left town, and the historic Lucky Strike towers and smokestacks can be seen from inside the DBAP. The ballpark is adjacent to the NC 147 highway and to the Durham Performing Arts Center, so access via car and parking is easy for first-time visitors.

The DBAP has split-level seating from foul pole to foul pole, with a covered sections behind home plate -- helpful for those sunny and/or rainy North Carolina summers. There’s a picnic area and more seats beyond right field, a grassy berm in center and a concourse walkway above center field and the Blue Monster -- a 32-foot wall in left field, a nod to Fenway Park’s iconic Green Monster.

Take in the views from atop the left-field wall and snap a pic underneath the mechanical bull, but watch out for home runs! A stairway leads down to the bullpen dining area and back to the split-level seating sections along the third-base line. Outside the ballpark and just beyond the left-field concourse, the Tobacco Road sports café offers a unique dining experience, with patio seating where a long ball might land in your lunch.

Despite saying goodbye in 1994 to Durham Athletic Park -- the club’s longtime home made famous by “Crash” Davis and “Nuke” Laloosh -- the Bulls will forever be linked to the Hollywood hit. The snorting bull, which fans and players grew to love after the Hollywood crew left it behind, is an iconic presence at any game, especially when good things happen for the home team. When a Durham player homers, the bull’s red eyes light up, smoke blows from its nose and the tail wags. The mechanical beast also swings into action after the final out of a Bulls win. The “HIT BULL WIN STEAK” promotion -- where a player who homers off the bull is rewarded with a free steak at a local restaurant -- also carried over from the movie, with one slight change. The green grassy part of the billboard underneath the bull now reads, “HIT GRASS WIN SALAD.”

“Bull Durham” wasn’t the only time the Bulls have been featured on the silver screen. In 2002, “The Rookie” portrayed the story of Jim Morris, a high school teacher and coach who made his MLB debut at the advanced age of 35. Though he only played 21 games in the Majors, Morris’ story of perseverance was another feelgood hit featuring the Bulls.

If younger legs grow restless, there’s the Wool E. World playground beyond the right-field foul pole with activities for kids to work out that energy. The play area is near restrooms, dining and the Jackie’s Landing bar, with great views of the game and outside the ballpark from the elevated deck.

The ballpark is also home to the Duke University baseball team, which has its own locker room at the DBAP, and Atlantic Coast Conference action often features future MLB-caliber talent. With the USA Baseball academy also nearby in Cary, the DBAP hosts its share of international competition as well.

Despite Durham’s beefy team name and mascot, Carolina-style barbecue is all about pulled pork. At the DBAP, you can have BBQ several ways, even atop a hot dog or nachos -- and don’t forget some hush puppies on the side.

The usual ballpark fare is also available, and the Bulls often partner with local eateries (and microbrewers) to deliver some extra Carolina flavor to the ballpark experience.

Wool E. Bull (the E stands for Education) became the official mascot in 1992, named by a fan who was inspired the oldies song “Wooly Bully.” Unlike the sluggish bull mascot that Laloosh plunks on the head with a wild pitch in “Bull Durham,” Wool E. brings high-energy antics to delight fans young and old. Those often include a race against a youngster around the bases, on-field dance routines and a speedy go-kart ride along the warning track.

Crossing over to basketball, get an up-close look at the Tobacco Road rivalry with self-guided tours of both Duke and the University of North Carolina’s historic facilities. Take a stroll through the Duke Basketball Museum & Sports Hall of Fame located at Cameron Indoor Stadium in Durham.

Follow that with a 30-minute drive to Chapel Hill and the Carolina Basketball Museum, next to the Dean E. Smith Center (aka the Dean Dome) where Michael Jordan’s jersey hangs among other Tar Heel greats.

After taking in Durham and Chapel Hill, complete the Research Triangle with a trip to Raleigh, home to the N.C. State Wolf Pack, the NHL’s Carolina Hurricanes and many other attractions in North Carolina’s capital city. The Piedmont region is also home to expansive trails and lakes for plenty of outdoor adventure.

Sticking with the “Bull Durham” theme, the renowned Washington Duke Inn & Golf Club offers a touch of elegance at its aptly named Bull Durham Bar. And thanks to the international draw of the Research Triangle and its universities, Durham’s restaurants offer a wide array of cuisines. Finish it off with a round of pool at the Green Room, where Nuke Laloosh once punched Crash Davis (with his non-pitching hand, of course).

Over in Chapel Hill, eat like a college student along Franklin Street at local favorites like the Time-Out restaurant, Sutton’s Drug Store diner and the Top of the Hill rooftop eatery.

Staying close to the DBAP, about a half-mile stroll away in the heart of downtown Durham there's a variety of hotel options. The area can have an active night life, with many popular restaurants and bars (including some inside the hotels) for an extra touch of Southern flavor.

If you're seeking a more refined stay, there's the Washington Duke Inn & Golf Club, located on the Duke campus -- and home to the Bull Durham Bar. The historic inn was designed as an English country estate, and its more modern sister property, the JB Duke Hotel, is just across the street.

Located in the heart of the former Carolina League (1945-2020), Durham is an incredible destination to include on a Minor League road trip, with ballparks in just about any direction. North Carolina alone is home to 10 teams across the Minor Leagues, with Low-A Carolina Mudcats and High-A Greensboro Grasshoppers each less than an hour from Durham.

The road to Tampa Bay

The Bulls are the final hurdle before joining the Rays in the always challenging American League East. It’s a Minor League journey that can include stops in South Carolina, Kentucky, Alabama and North Carolina, before the ultimate trip south to Tropicana Field in St. Petersburg. 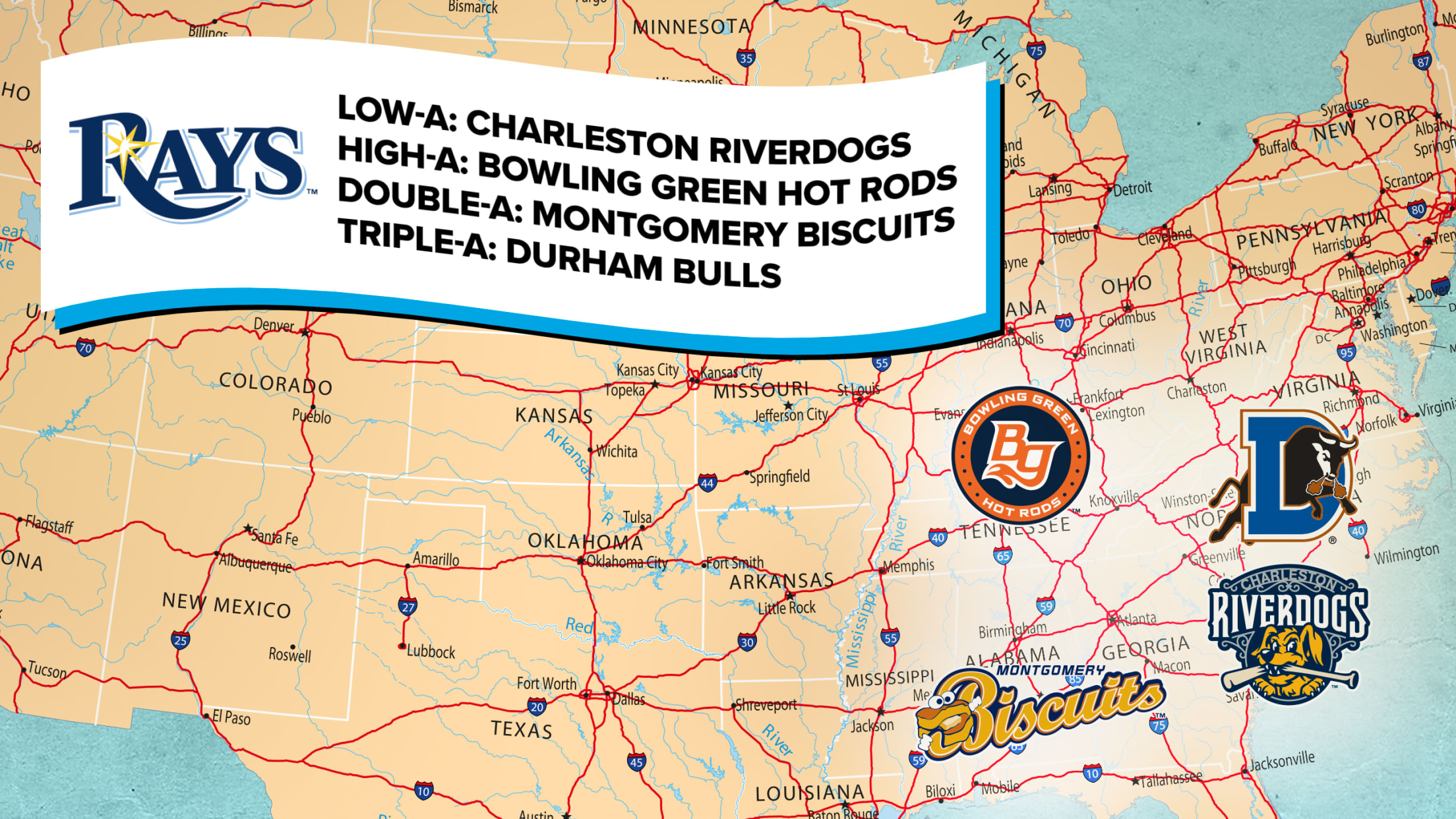