Scioscia adjusts, but stays true to self

Angels manager has fostered winning environment since taking post in 2000

But you don't become Major League Baseball's longest-tenured and one of its highest-paid managers without adjusting to the times.

For Scioscia, it's steady as you go -- win or lose.

"I know I've never looked past a day," Scioscia said as he sat in his office before a game this week against the Rays. "When you're in this position, you're consumed on a daily basis with what you have to do. You have to keep moving forward.

"It's almost like you're here day to day and it adds up to all these years. I never really think about the longevity or stuff like that." 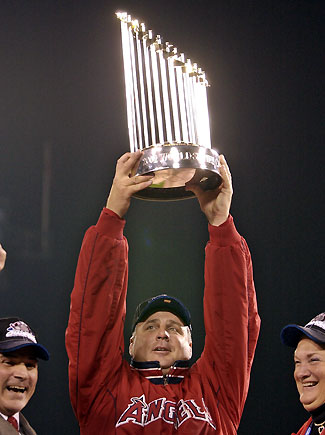 Scioscia took over the Angels in 2000 after coaching in the Dodgers' system and one year (1999) as manager at Albuquerque, their top Minor League affiliate. In 2002, he led the Angels to their first and only World Series championship, beating San Francisco.

His enormous success earned him in 2009 an almost unheard of 10-year extension through 2018 that pays about $5 million a year.

With a World Series title and all those division titles, I feel certain he's headed to the Hall of Fame once he retires. None of his teams have finished below third place.

"The players should be thankful they play for Mike Scioscia," said hitting coach Don Baylor, who himself managed nine years with the Rockies and Cubs. "Unlike other managers I've played for, there's no screams, no hollers, no panic. He's calm -- even when we're going through a bad streak -- and that's so important."

Scioscia, 56, played his entire career (1980-92) for Tommy Lasorda and the Dodgers, "but also had influences from guys like Roy Campanella, Del Crandall, Johnny Roseboro. Growing up in the Dodgers' organization, their knowledge of the game was unbelievable.

"When I came here, Preston Gomez was one of the brightest baseball minds I was ever around, looking at the roster, looking at the game,' Scioscia said. "You pick pieces from people you're around, and that's what I did."

Baseball, especially managing, has changed dramatically since 2000, and although Scioscia says he uses all the tools available in this new era, he insists vehemently he hasn't changed his approach or philosophy.

"When I first started, I wanted to peel the paint off things and see which direction to go," he said. "I created an environment on how I wanted to teach the game, how I was going to focus on winning and all the components that lead up to a win. That's never changed."

He added: "There's too much focus on the batter's box, what hitters are doing. There's so much that goes on in a game that ends up being just as important. You have to pay attention and that's what I tell my players."

He disagrees managing has dramatically changed.

"Yes, in the last 10 years there has been an analytical component that's never been part of our game. I believe a lot of the sabermetrics that analyze the data has many uses, but most are for the front office to make determinations on players."

He admits, though, that some of these data "at the game management level, I'm finding very useful."

When Scioscia began his managerial career, "I went with a lot of the old common-sense metrics of what a player was doing. As far as the shifting component, tendencies on a hitter, we have much more data now. It helps us a lot in making a game plan. So you can say I'm a crossover manager."

"It can be," he said. "How can wins above replacement help a manager? How does balls in play help a manager? We're dealing in situations and specifics. Of all the analytics out there, very few are applied in the dugout to game management.

"But a lot of the homework we've done in the dugout is going to help the next generation of managers. The managers today come with all different resumes. The skillset you need is similar across all generations."

Creating a winning environment is the bottom line, and that's Scioscia's greatest asset.

"The biggest thing is he wants to win and does whatever it takes to reach that goal. That's what you want in a manager," says 2014 AL MVP Mike Trout. "When we're down, he picks us up. When we're going well he's there to support us."

The Angels had been struggling scoring runs when they came to Tropicana Field this week, but they moved to .500 after winning two of three games, including Thursday night's 6-2 victory.

"I am convinced as the summer goes on, we're going to evolve into a championship-caliber club," says Scioscia.

Across the field, Rays rookie manager Kevin Cash has fewer than three months in this rugged business, and he is in awe of Scioscia's tenure.

"Mike's won with different types of teams. Years ago, there was a very much of a manufacturing-type offense -- a lot of hit-and-run, a lot bunting. Now, he's adapted to his roster with plenty of capabilities to knock the ball out of the park," said Cash.

To suggest the key to Scioscia's success has been changing with the times is entirely wrong.

"It's just the opposite," he said. "You have to be true to your philosophy the whole way. You can make adjustments along the way, but the one thing that is you is your philosophy -- teaching baseball and creating an environment for winning.

"If you compromise, that you're starting to unravel. And for 16 years, my philosophy is as true as it was the first day I stepped in here."