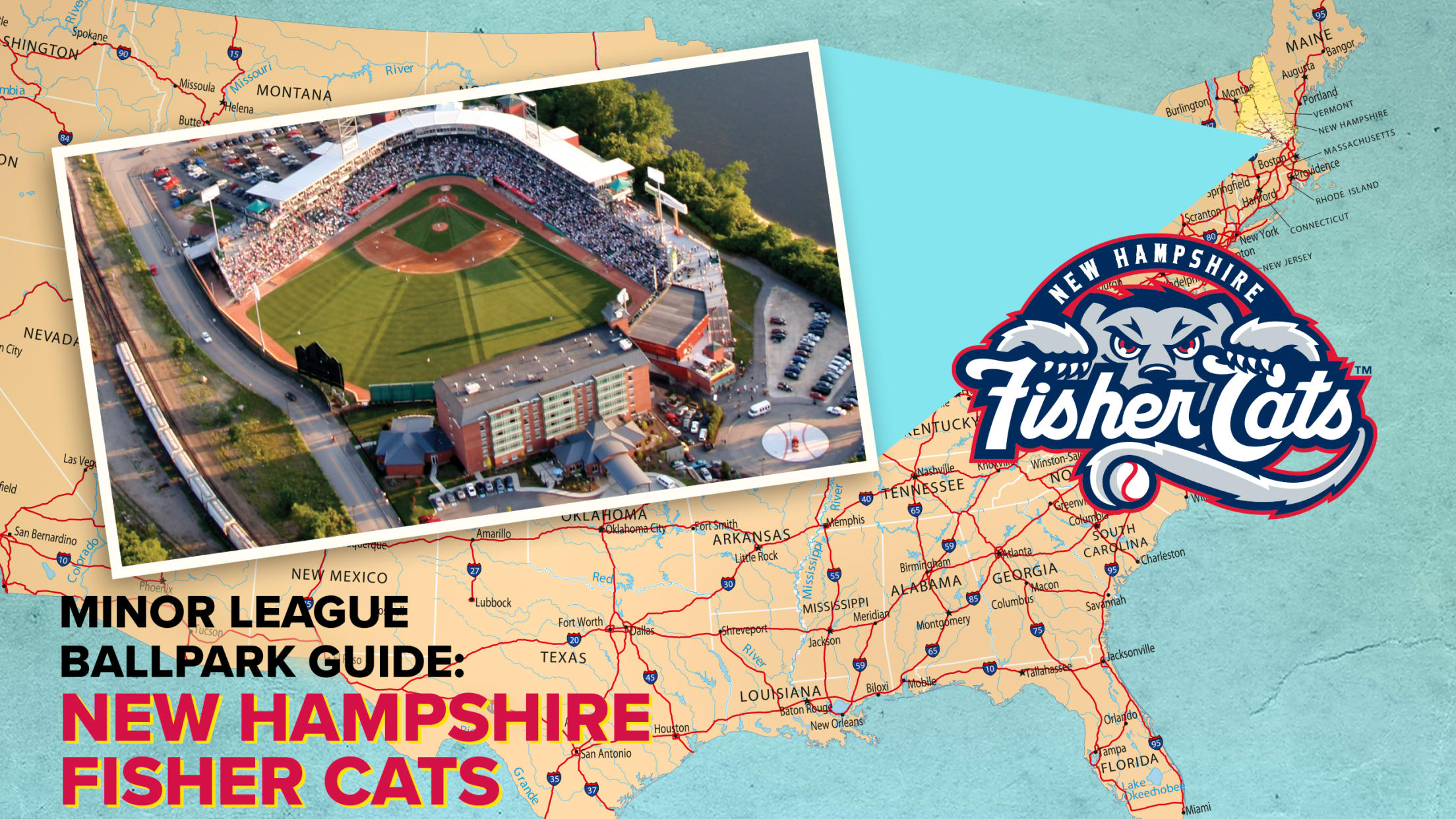 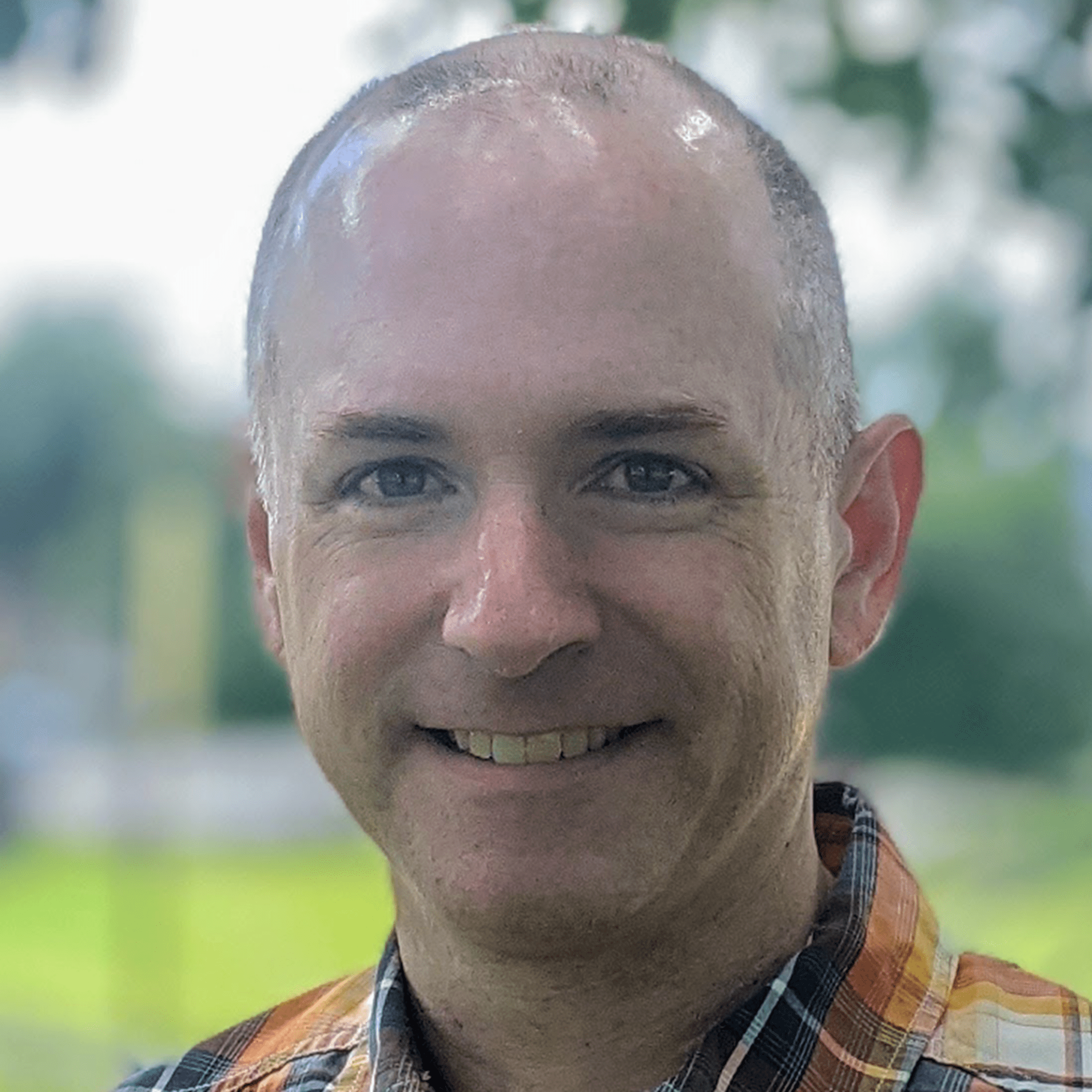 Welcome to Delta Dental Stadium in Manchester, N.H., where you can visit the only Frank Lloyd Wright houses open to the public in New England, grab some chicken fingers at the restaurant that claims to have invented them, or head a little farther upstate to climb Mount Washington or frolic in Lake Winnipesaukee. 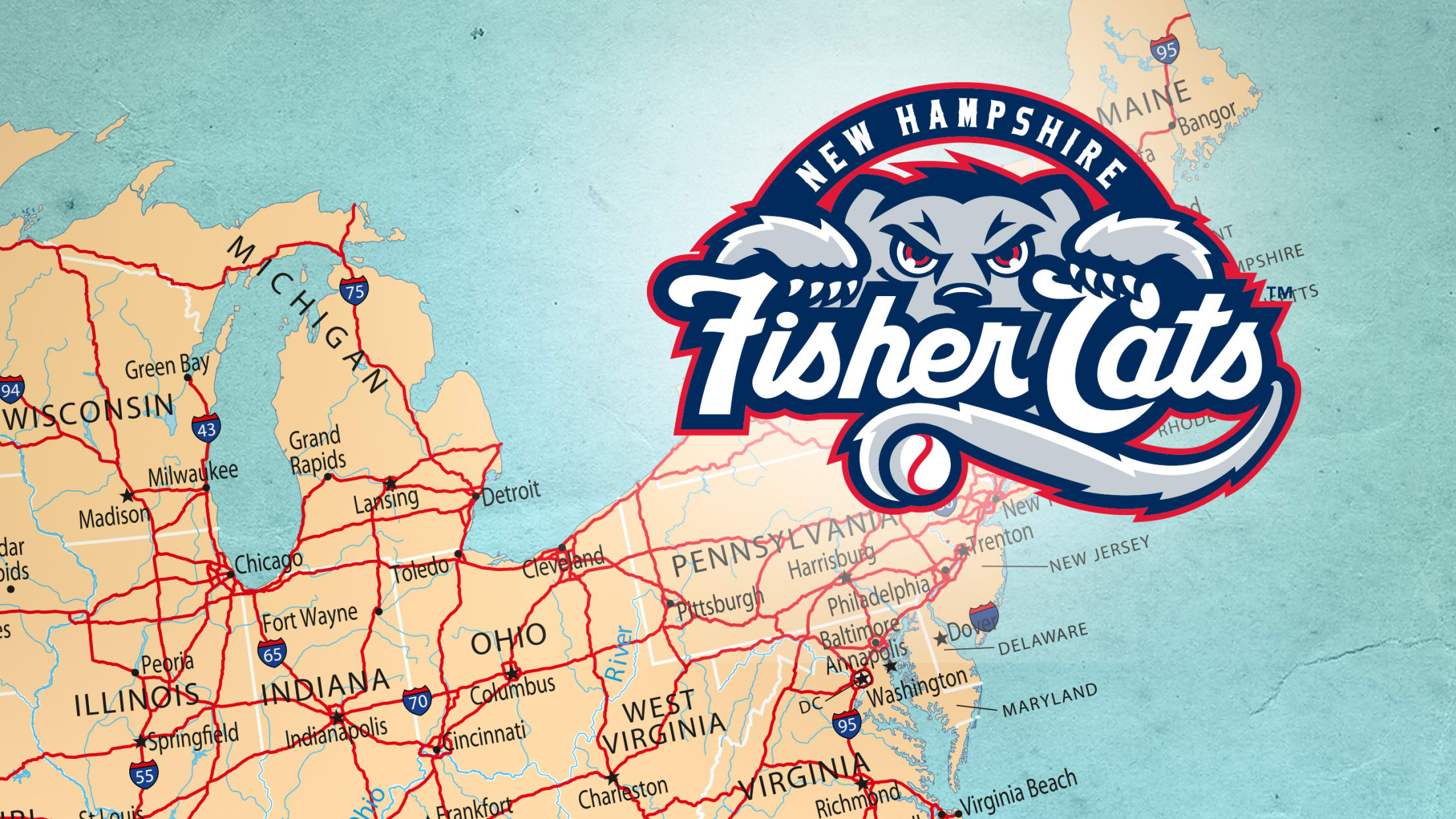 Manchester, N.H., is the largest New England city north of Massachusetts, with a population of 115,000. It’s been home to more Minor League teams than any other city in New Hampshire or Vermont (and is second only to Portland among Maine communities) and was the first among those states to field a team, beginning in 1877. The Fisher Cats, who arrived from New Haven, Conn., in 2004, are the longest-tenured team to call the Queen City home, far surpassing the Manchester Blue Sox, who played in the New England League from 1926-30. Prior to the Fisher Cats’ arrival, the last team to call the city home was the Eastern League’s Manchester Yankees from 1969-71. 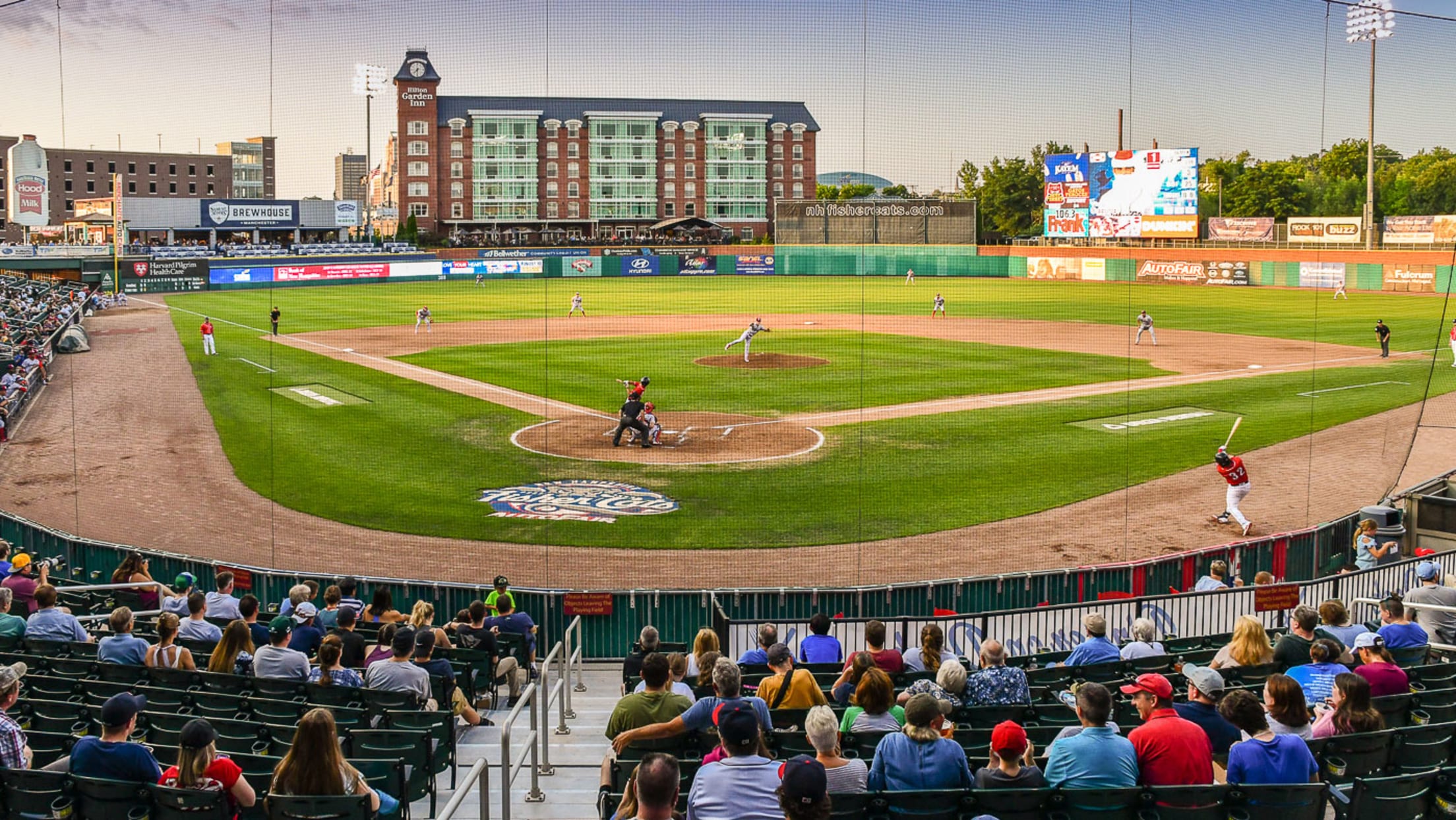 When the New Haven Ravens moved north, the original plan was to change the team name to the New Hampshire Primaries in recognition of the first-in-the-nation elections held every four years. But after local fans urged the team to reconsider, a name-the-team contest put it up to a vote among five finalists: Manchester Millers, Granite State Mountain Men, New Hampshire Granite, New Hampshire Primaries and the ultimate winner. The team has held alternate-identity promotional nights over the years where it has played as the Primaries. Though generally the size of a common housecat, a fisher cat is a carnivorous mammal in the weasel family – so, not actually a cat. 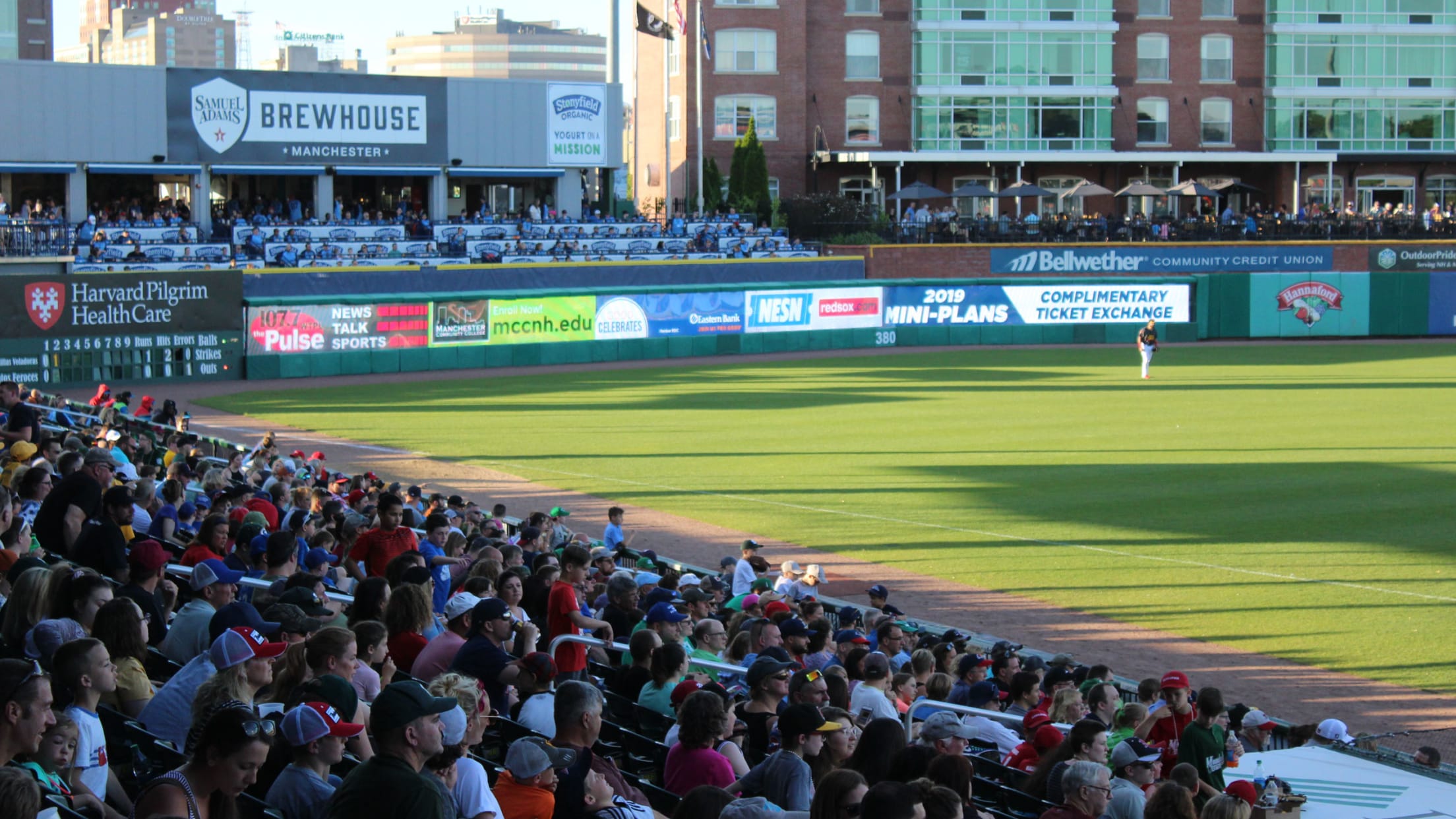 Delta Dental Stadium sits along the eastern bank of the Merrimack River, just south of downtown Manchester. An open concourse allows for views of the field from any vantage point, and the upper level of the ballpark includes 32 suites and two party decks. A major renovation in 2017 added tiered seating beyond the left-field wall and a new entrance plaza with a tiki bar, a gaming area, a stage for live music and a rock waterfall at the top of the main stairway. 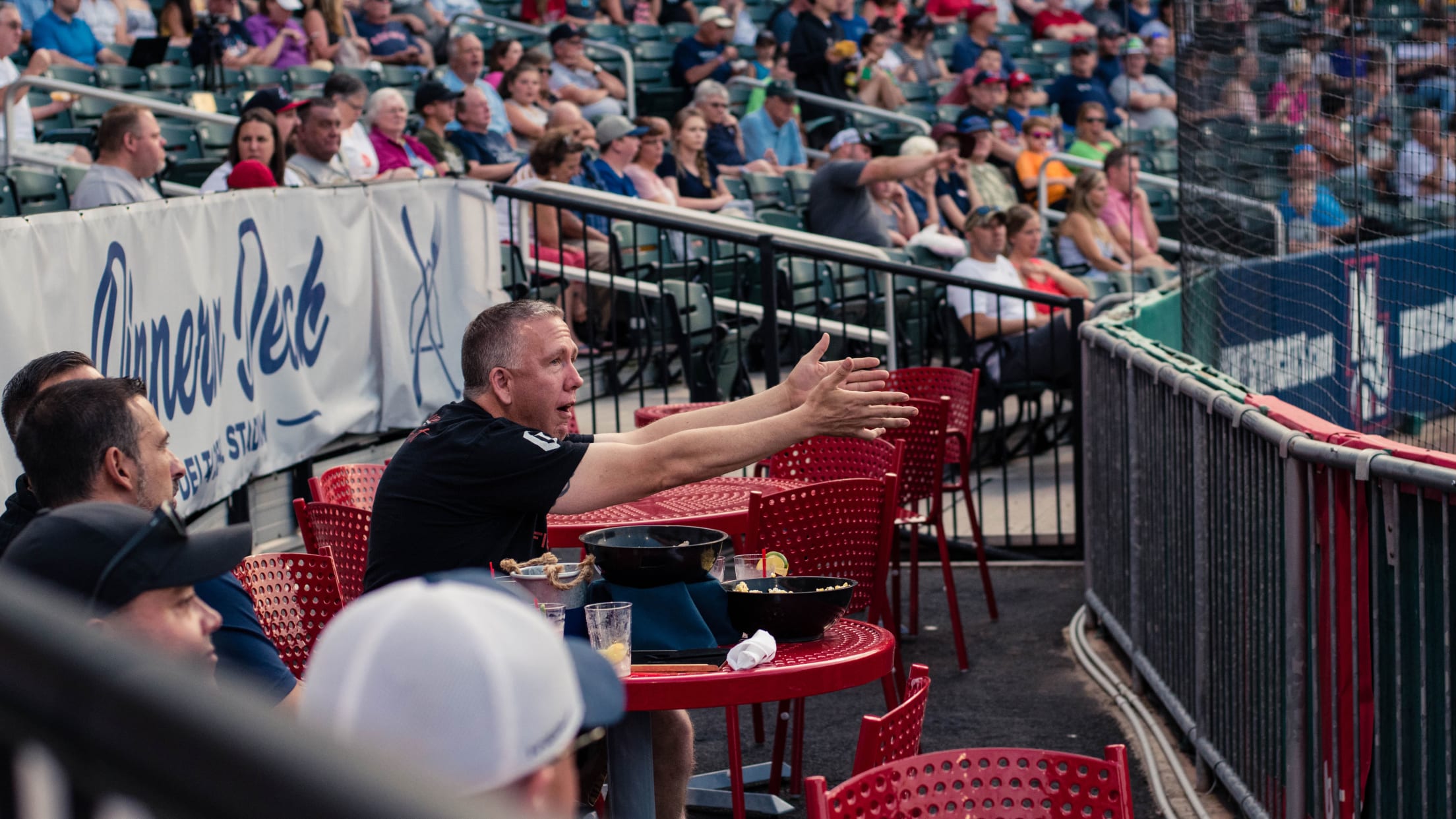 Dinner on Deck seating puts fans right next to the field.

The most popular hospitality area since its introduction in 2019 is Dinner On Deck, a series of picnic tables right behind the Fisher Cats’ on-deck circle. There’s full wait service, complimentary drinks and snacks, and a menu of tasty ballpark fare.

The Sam Adams Brewhouse, a full-service restaurant, opens onto the left-field seating area. A true sports bar, it includes high-definition TVs and an 85-foot bar. The adjacent tiki bar features live music every Thursday through Saturday.

And though New Hampshire may have only 18 miles of Atlantic coastline, this is New England – lobster rolls are on the menu here. 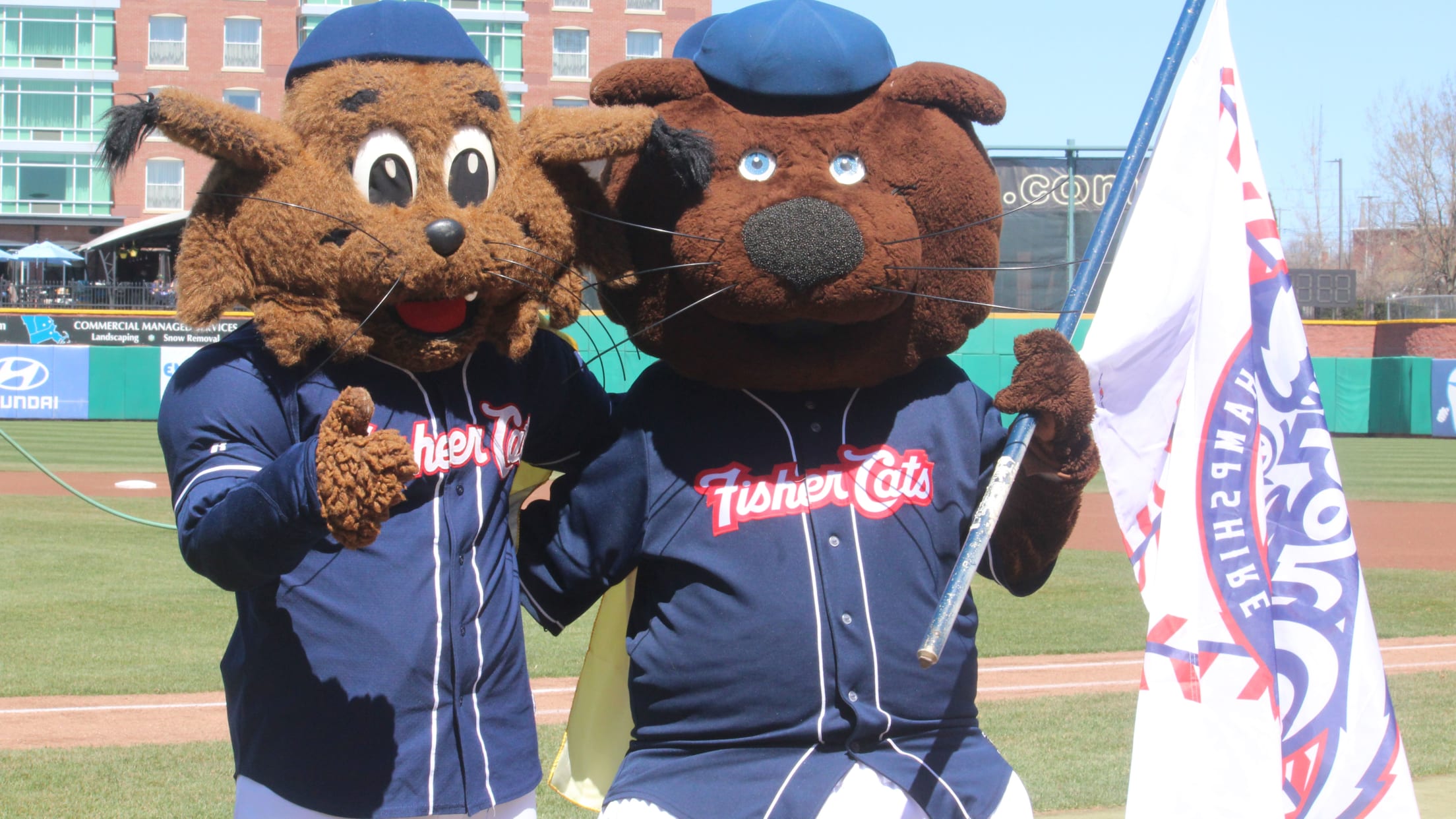 Slider and Fungo are more cuddly than actual Fisher Cats.

Delta Dental Stadium is home to two fisher cats known as Fungo and Slider. According to local lore (or the team website), Fungo floated down the Merrimack River from the White Mountains in 2003, just before the team arrived. His favorite food is whatever he’s eating at the moment, his favorite player is Vladimir Guerrero Jr. and his life philosophy revolves around his belief that a hot dog is a sandwich.

Slider is Fungo’s second cousin once removed and known as the “resident mischief-maker” at the ballpark. But he’s not all pranks and antics; off the field, he cherishes his gym time and studies Eastern philosophy. He’s a learned fisher, that one.

The Fisher Cats will also have a new bat dog this season, debuting in May.

Half a mile from the ballpark is the Millyard Museum, part of the historic Amoskeag Millyard complex, with exhibits on the history of the industrial city and the people who have lived along the Merrimack River, going all the way back to the Native Americans who first settled on the land. The SEE Science Center is also part of the complex.

A little over an hour from the ballpark is Lake Winnipesaukee, New Hampshire’s largest lake and the third-largest in New England. Twenty-one miles long and one to nine miles wide, it covers 69 square miles and is great for boating, Jet Skiing, stand-up paddleboarding, canoeing and swimming. Several towns surround the lake and offer shopping, dining, lodging and rentals for various activities; check out Alton, Gilford, Meredith or Wolfeboro. 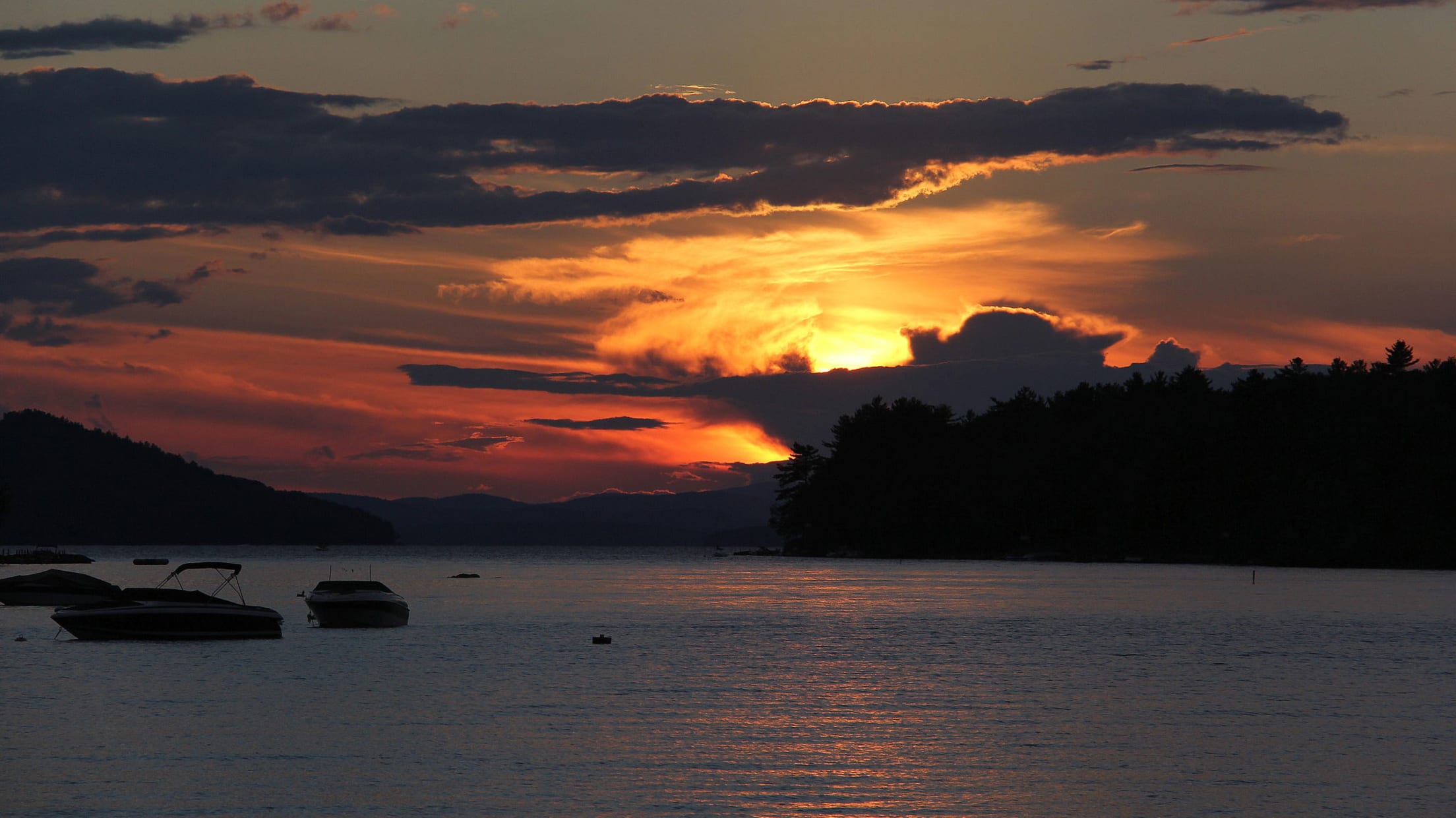 The sun sets on Lake Winnipesaukee. (Photo by Dan Cichalski)

About three hours north of Manchester, Mount Washington rises 6,288 feet above sea level, the highest peak in the northeast. Known for its extreme weather – the Mount Washington Observatory once recorded a windspeed of 231 mph – the peak can be reached via the Appalachian Trail (among other hiking routes), the historic Mount Washington Cog Railway or an auto road (responsible for bumper stickers often seen throughout the region).

On the way to Mount Washington, stop off in Franconia to see the Old Man of the Mountain – or, rather, where he used to be. The iconic granite formation resembled a man’s face in profile and was such a landmark that it has appeared on postage stamps, New Hampshire license plates, state highway signs, and the obverse of the New Hampshire state quarter. The coin was issued in 2000, three years before the Old Man crumbled onto the mountainside below.

Today, the site features a viewing plaza with a clever substitute: several steel rods have the Old Man’s profile attached to them. Guides on the ground direct visitors where to stand. Looking up at the peak of Cannon Mountain where the formation used to be, you can see into the past at what it used to look like. There’s also a museum celebrating the history of the formation, as well as a gift shop.

Every four years, when presidential hopefuls and the media hordes covering them descend on the Granite State for the New Hampshire primaries, they’re sure to find their way to the Red Arrow Diner, which is celebrating its 100th anniversary this year. Or head up to the Puritan Restaurant, which claims to have invented the chicken tender, now a staple at ballpark concession stands. The Fisher Cats will rebrand as the Chicken Tenders for one game this season.

You can literally stay at the ballpark at the Hilton Garden Inn Manchester Downtown – rooms on its southern side look onto the field and have shatterproof glass on the windows to prevent home runs from invading guests’ privacy. Other downtown options within a few miles of Delta Dental Stadium include Tru, DoubleTree and Residence Inn properties. 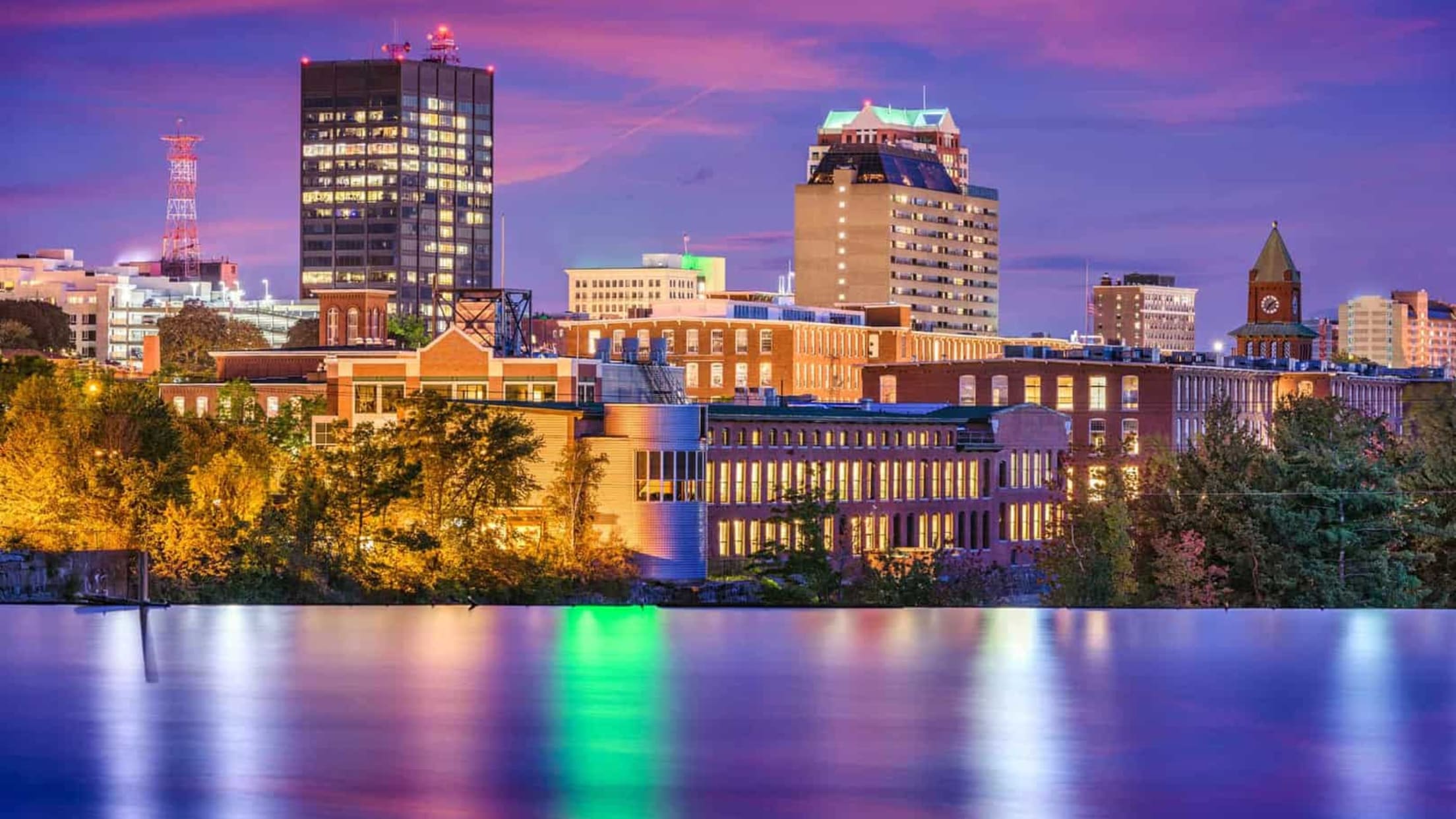 The Manchester skyline at dusk.

The Fisher Cats are the only professional team in the Granite State, but the New England Collegiate Baseball League – a 14-team wood-bat summer circuit – has two clubs in New Hampshire. The Keene Swamp Bats are about 60-70 minutes west, and the Winnipesaukee Muskrats are an hour north in Laconia. And the Portland Sea Dogs, Boston’s Double-A affiliate and New Hampshire’s local rival, are about an hour and a half away in Maine.

The Road to Toronto 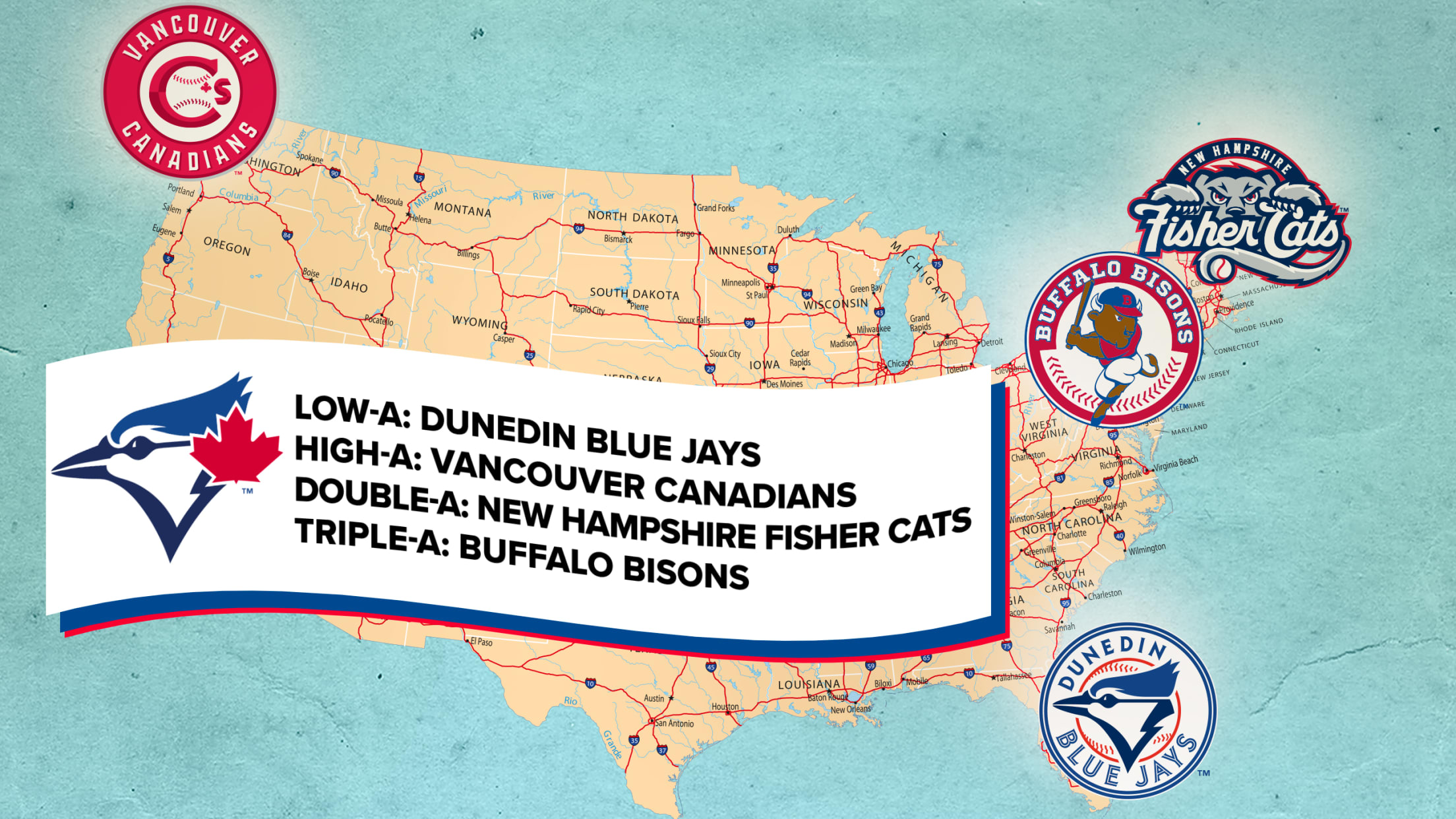 The Blue Jays’ top two affiliates are close to Toronto in the northeast United States, but the two lower levels are in different corners of the continent. Their Low-A affiliate plays in the parent club’s Spring Training home in Florida. The High-A club is in Vancouver, British Columbia, more than 3,000 kilometers (or 2,000 miles) west of Toronto. Manchester is about 600 miles east of Ontario – via Niagara Falls and Buffalo, then a long haul east across the New York Thruway if you’re driving. The Triple-A Buffalo affiliate is only a two-hour jaunt from Rogers Centre.