Around the Horn: Regimen preps Segura at short

This is the eighth installment of an Around the Horn series that has already bounced around the diamond to cover the starting rotation, the bullpen, second base, right field, first base, center field and catcher. Up next: Shortstop.

PHOENIX -- Brewers shortstop Jean Segura is finally comfortable admitting he wore down at the end of his full season in the big leagues, and spent the winter trying to ensure it does not happen again.

Six days a week beginning in November, often twice a day, Segura met his uncle on a track or a dusty baseball field near his family's home in San Juan de la Maguana, a city in the western part of the Dominican Republic less than an hour's drive from the Haitian border. Oscar Antonio Encarnacio, Segura's mother's brother, is a former champion middle distance runner who was training for the 1996 Summer Olympics when he stumbled on a rough patch of road and blew out his knee. These days, Uncle Oscar is Segura's personal trainer.

"We would be sitting here for two days if I told you everything we did," Segura said.

They ran for distance and they sprinted. They did agility drills and baseball drills. On two-a-days, they worked out from 6 a.m. to 9 a.m., had breakfast, then took the field from 10 a.m. to noon for infield work. After lunch and a nap, Segura would be back on the track at 5 p.m.

On Tuesdays and Saturdays, Segura took the afternoon off. On Sunday, he rested. On Monday, it was back to the track.

"It was fun," Segura said. "I felt I needed more rest from baseball in the offseason, but I still worked hard to be prepared for this season. I always worked with him for a short time [over the winter], but this was the first time we worked a full schedule. We worked hard." 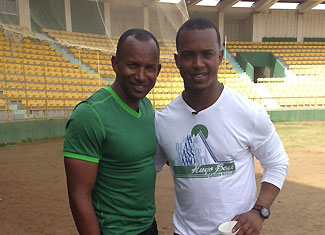 Segura had time for these workouts, because for the first time in as long as he could remember, he did not play winter ball. This was by order of the Brewers, who saw the way Segura fatigued during the second half of the 2013 season.

One could not blame Segura for being a bit tired. He was traded to the Brewers in the July 2012 deal that sent Zack Greinke to the Angels, then saw his first extended action in the Major Leagues beginning in August. After the season, Segura joined the Gigantes del Cibao and won the Dominican Winter League battle title. Less than two months later, he was vying for starting shortstop duties in Brewers camp. On June 1, he led the National League in average, hits, total bases and multihit games. In July, he was an NL All-Star.

The grind took its toll. Segura's on-base plus slugging percentage declined every month, from .985 in April to .601 in July to .552 in September. He hit .214 with only three extra-base hits in the season's final month.

"Everybody knows -- you can look at it -- I got a little bit tired," Segura said. "I don't want to try to make an excuse, to [blame numbers in the] second half because I was tired, you know. ... I went out there on the field to compete and play my game, I wanted to do the right thing all the time, and sometimes it doesn't happen."

So he went to work over the winter to fix it.

"I didn't sit down at home and watch TV," Segura said. "You know, I believe the guys that work hard, at some point in his career they're going to get success. I always work. I never take anything for granted."

Even with his second-half fade, Segura finished the season as the Brewers' leader in batting average (.294), hits (173), and stolen bases (44) while tying Carlos Gomez for the team lead with 10 triples. Segura led the Major Leagues and set a Brewers record with 44 infield hits.

He also played a terrific shortstop, an ability that was questioned when the Brewers traded for Segura in 2012. Because of his relatively short stature, some scouts predicted Segura would one day wind up at second base. Brewers manager Ron Roenicke does not buy that analysis.

"Any time somebody sees him, he's fabulous [at shortstop]," Roenicke said. "The second half, he didn't play as well. He didn't, whether it was injuries or worn down or whatever the reason. But defensively, this guy can really play. He's got great range, he's got a great arm, and it's a really quick arm. So when he gets the ball, it's not this long stroke to throw it. It's right here, and he's really got something on it. I expect him to be a really good Major League defensive shortstop for a long time."

Was Segura's breakthrough a surprise?

"Not really, because when you have experience you can see when a young guy is going to be a success," said Gomez, who will probably pair with Segura atop the Brewers' batting order this season. "Everything he does is simple. He's not going to get in big slumps. Me and Siggy are two different kinds of swings.

"I have more movement. He uses his hands. He's 'inside' every time. He's going to hit. He's strong and he plays hard. This was a good decision for the Brewers' organization to get a young shortstop who is going to be here for a long time."

There is already chatter about a contract extension. General manager Doug Melvin said he is open to the idea but has not reported any progress with Segura's agent, Joe Klein. They plan to talk more this spring.

"I'm hoping what we saw the first half [last season], we see the whole year," Roenicke said. "If we see that, we've got a great player."

Adam McCalvy is a reporter for MLB.com. Read his blog, Brew Beat, and follow him on Twitter at @AdamMcCalvy.
Read More: Milwaukee Brewers, Jean Segura