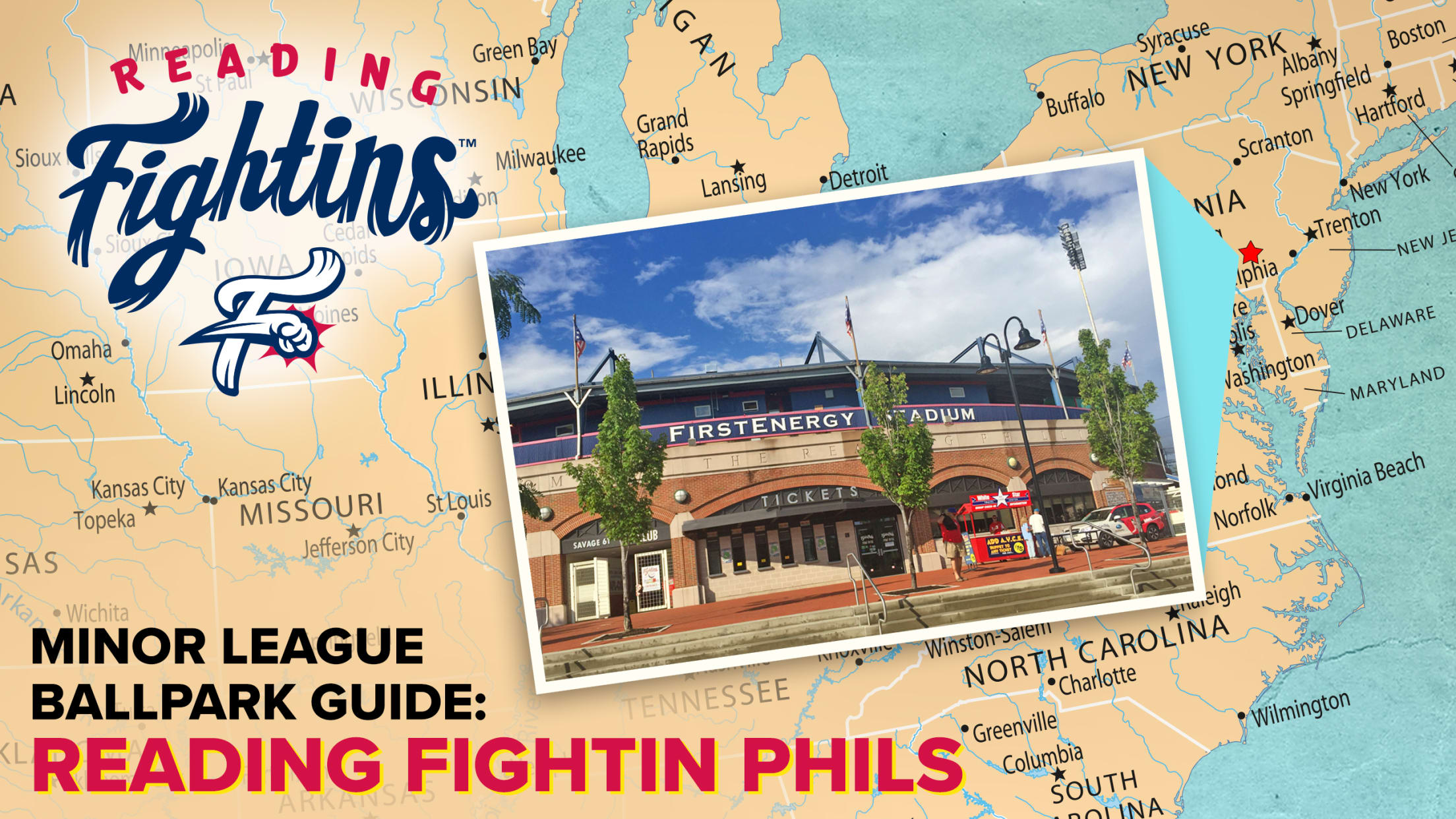 Welcome to FirstEnergy Stadium, a historic facility populated by a unique stable of ballpark characters. Cheer for the Reading Fightin Phils, scream for the Crazy Hot Dog Vendor and rock out with the Mascot Band. This is Baseballtown, and there's no place quite like it. 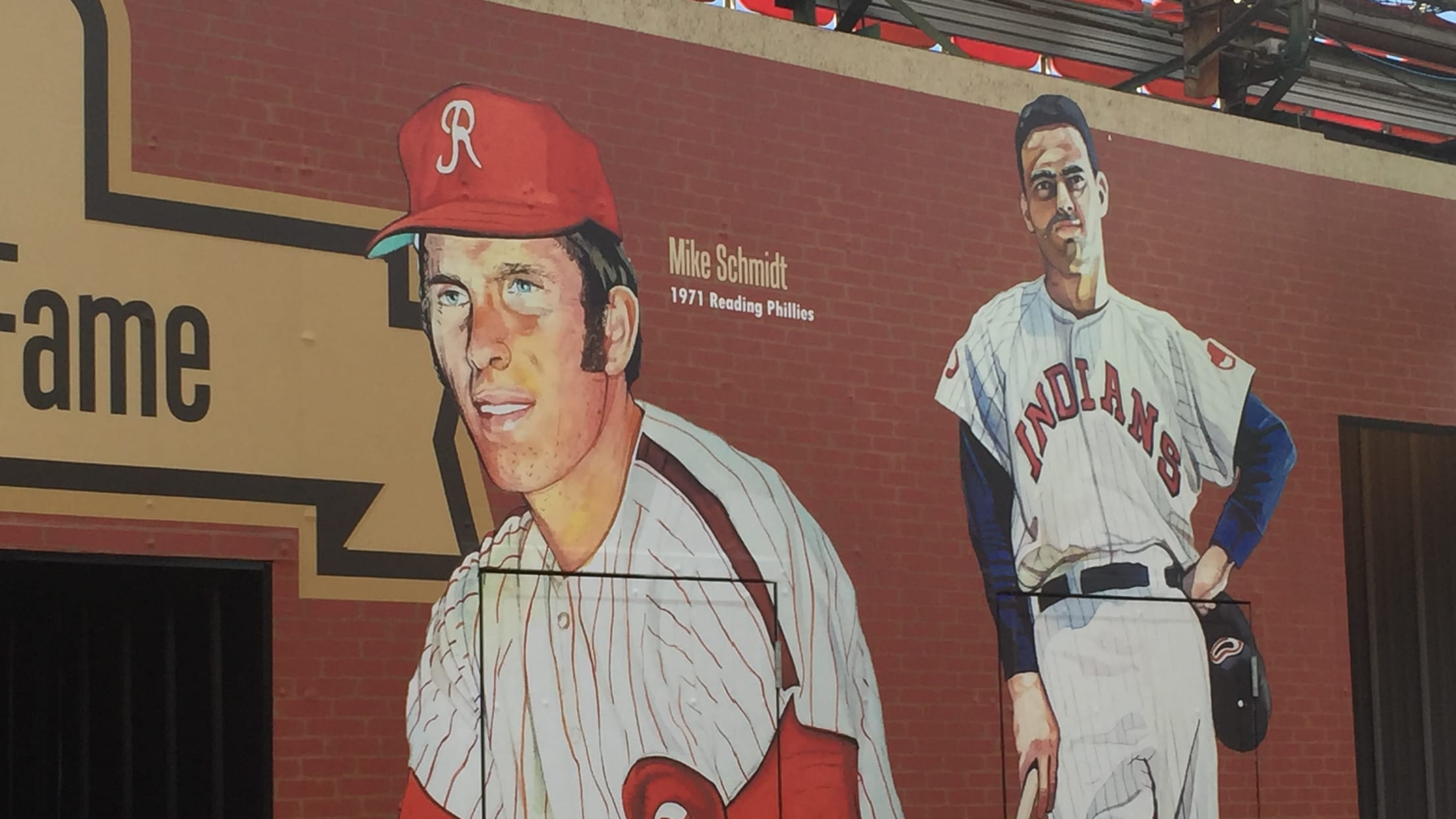 Reading, Pa., located 75 miles to the northwest of Philadelphia, boasts a long and storied baseball history. The city's first professional baseball team, the Reading Actives, debuted in 1883. The ensuing six decades remained active, with Reading going on to field teams such as the Coal Heavers, Pretzels, Marines, Aces and Keystones. 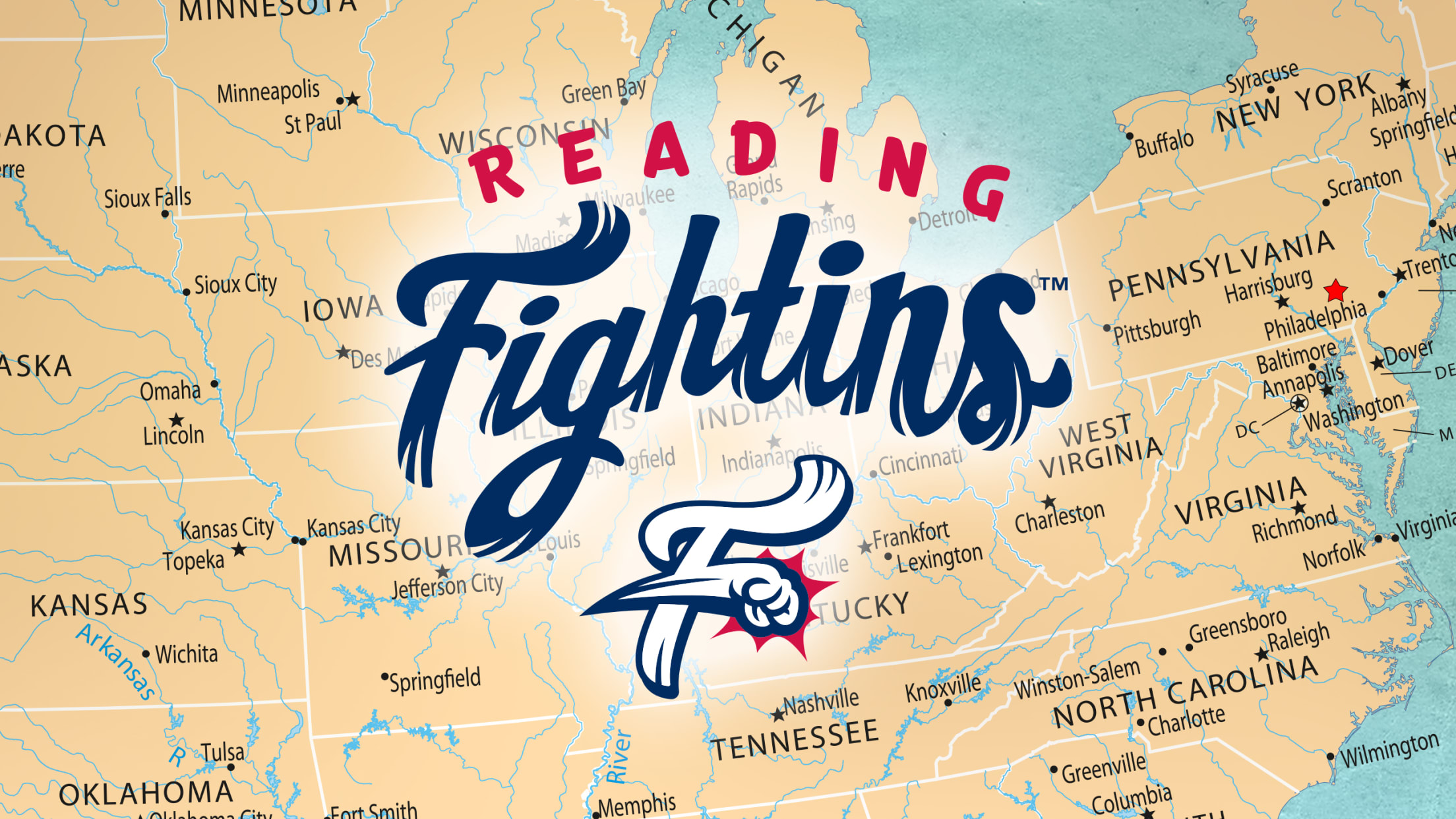 From 1952-61 and again from 1963-65, Reading was home to an Eastern League team. In 1967 the EL returned yet again in the form of the Reading Phillies, the same franchise that calls Reading home today. Prior to the 2013 season the team changed its name to the Fightin Phils, a move that allowed them to forge a distinct identity while still retaining an explicit connection to their longtime parent club. The partnership between Reading and Philadelphia, dating back to 1967, is tied with Lakeland and Detroit for the longest current affiliation in all of Minor League Baseball. 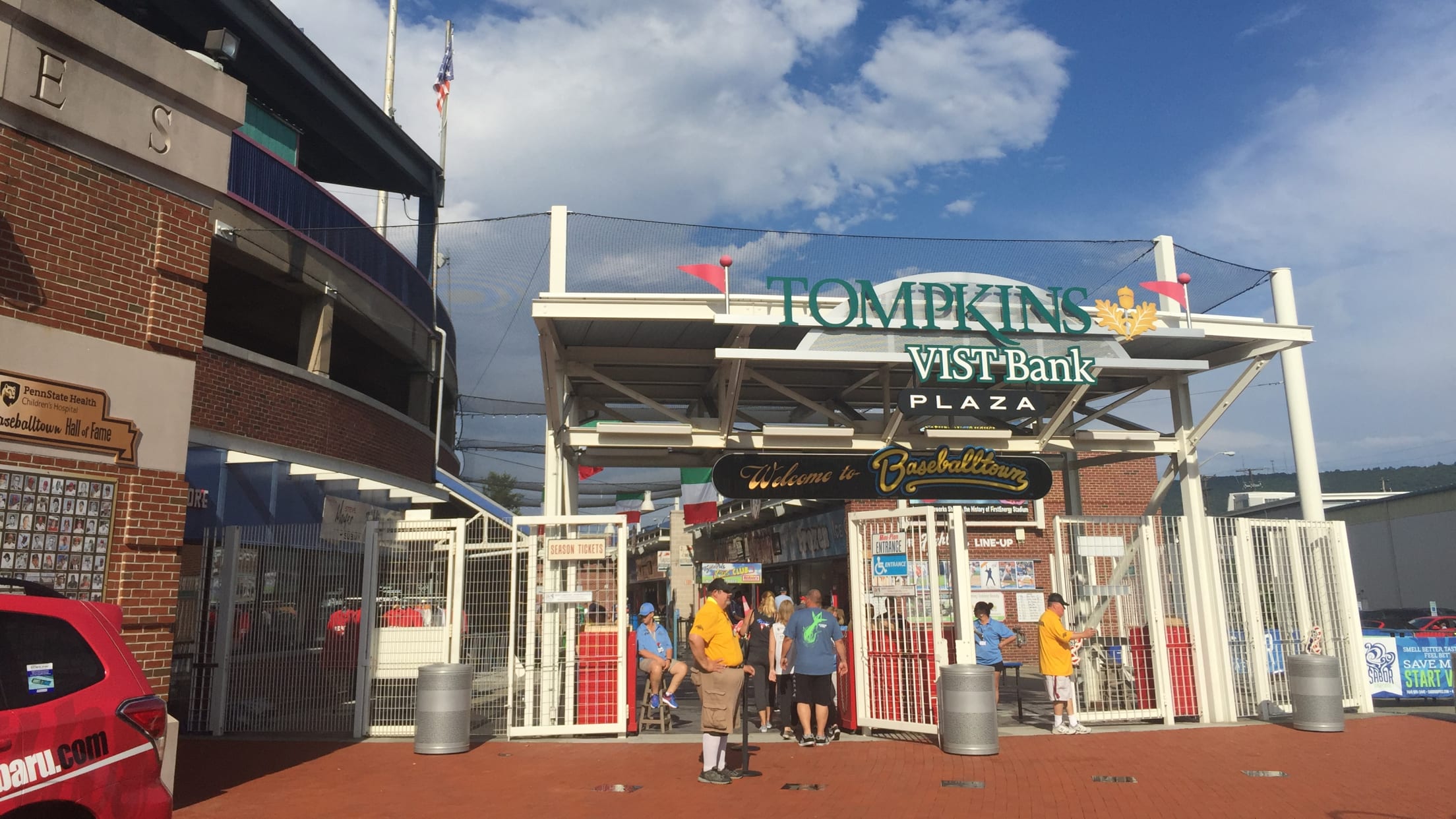 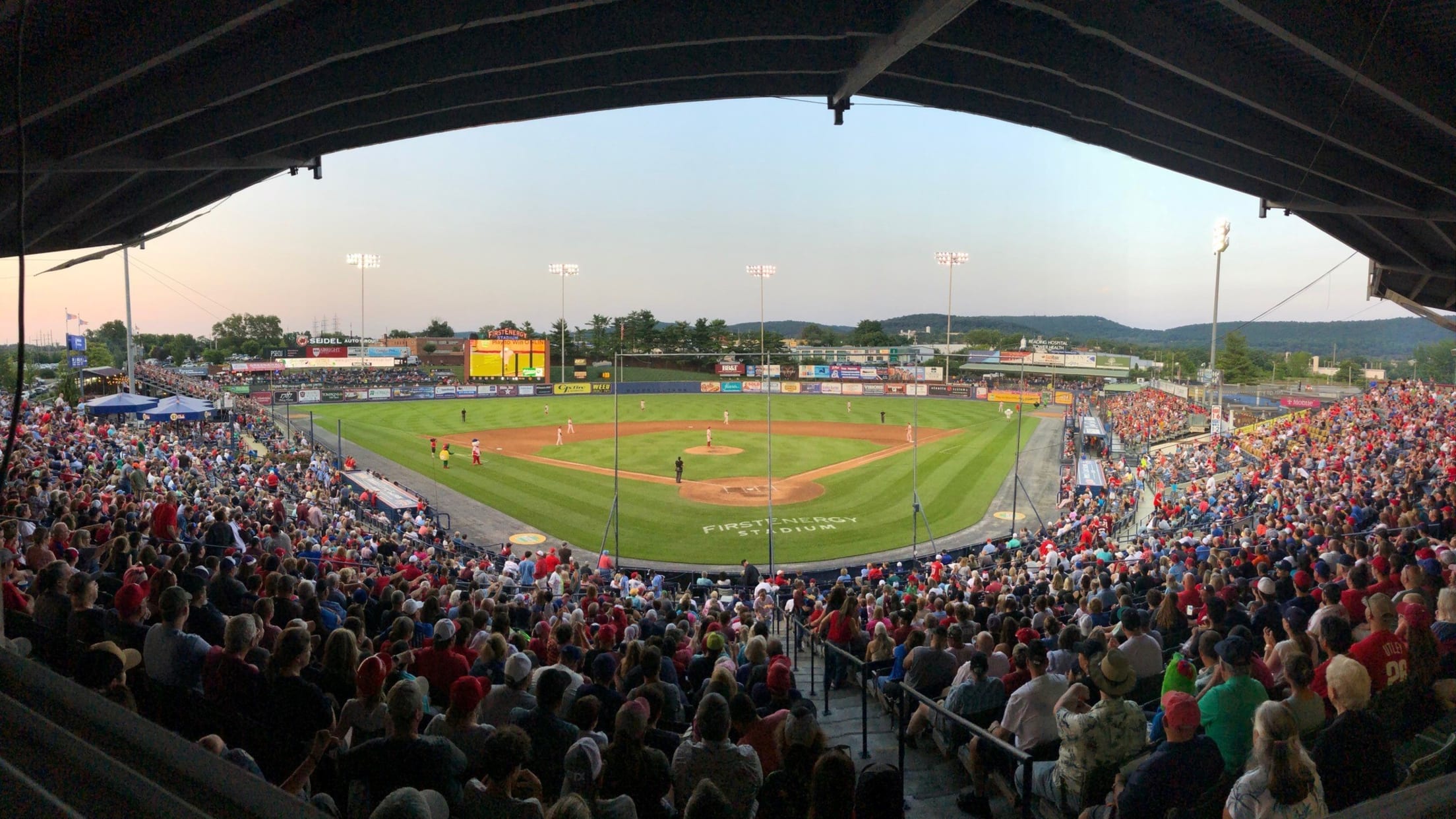 Seventy-one-year-old FirstEnergy Stadium is perhaps the premier example of a "best of both worlds" Minor League atmosphere, in which an old ballpark retains its throwback charm while offering a modern entertainment experience. The history and proximity between Reading and Philadelphia results in a fan base that is both passionate and knowledgeable. The same goes for the front office staff, which has featured far less turnover than is typical in the industry.

This is a ballpark rich in color and character, set against a bucolic Berks County backdrop. A Fightin Phils game is equal parts sporting event and county fair, a sensory overload mash-up of the traditional and idiosyncratic that, somehow, all seems to make sense. 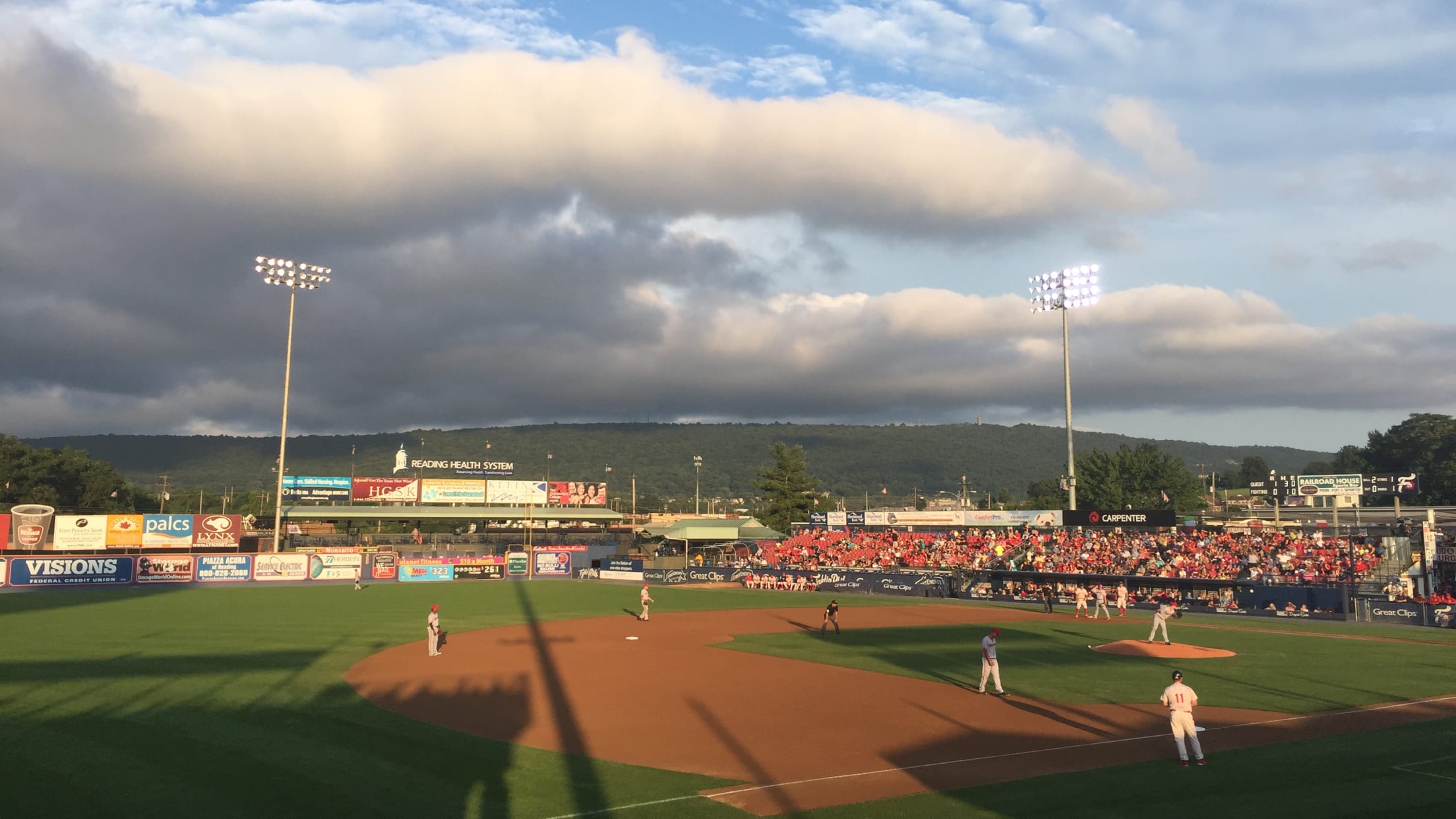 The Fightin Phils refer to their ballpark and its immediately surrounding area as Baseballtown, a self-evident sobriquet. FirstEnergy Stadium, originally known as Reading Municipal-Memorial Stadium, emits a classic feel via its brick exterior and arched entranceways. The main entrance is located along the first-base side, leading to a plaza that houses a bar, boardwalk-style concession stands and a performance stage. On this stage one can often find the Fightin Phils' Mascot Band, a group of costumed characters that specialize in classic rock covers. The band debuted in 2001 and has since performed over 300 ballpark concerts.

FirstEnergy Stadium's open-air plaza is adjacent to a closed concourse, situated behind home plate and extending up the baselines on both the first- and third-base sides of the field. The concourse leads to an idiosyncratic area down the third-base line, featuring a bar, more concessions and an improvised picnic area within what used to be a batting cage. The entire ballpark perimeter is filled with artwork and photographs celebrating Reading's deep baseball history and, in particular, its connections to the Philadelphia Phillies. Over the past 50 years, virtually all of the Phillies' homegrown stars have spent time in Reading before flourishing in the city of Brotherly Love. 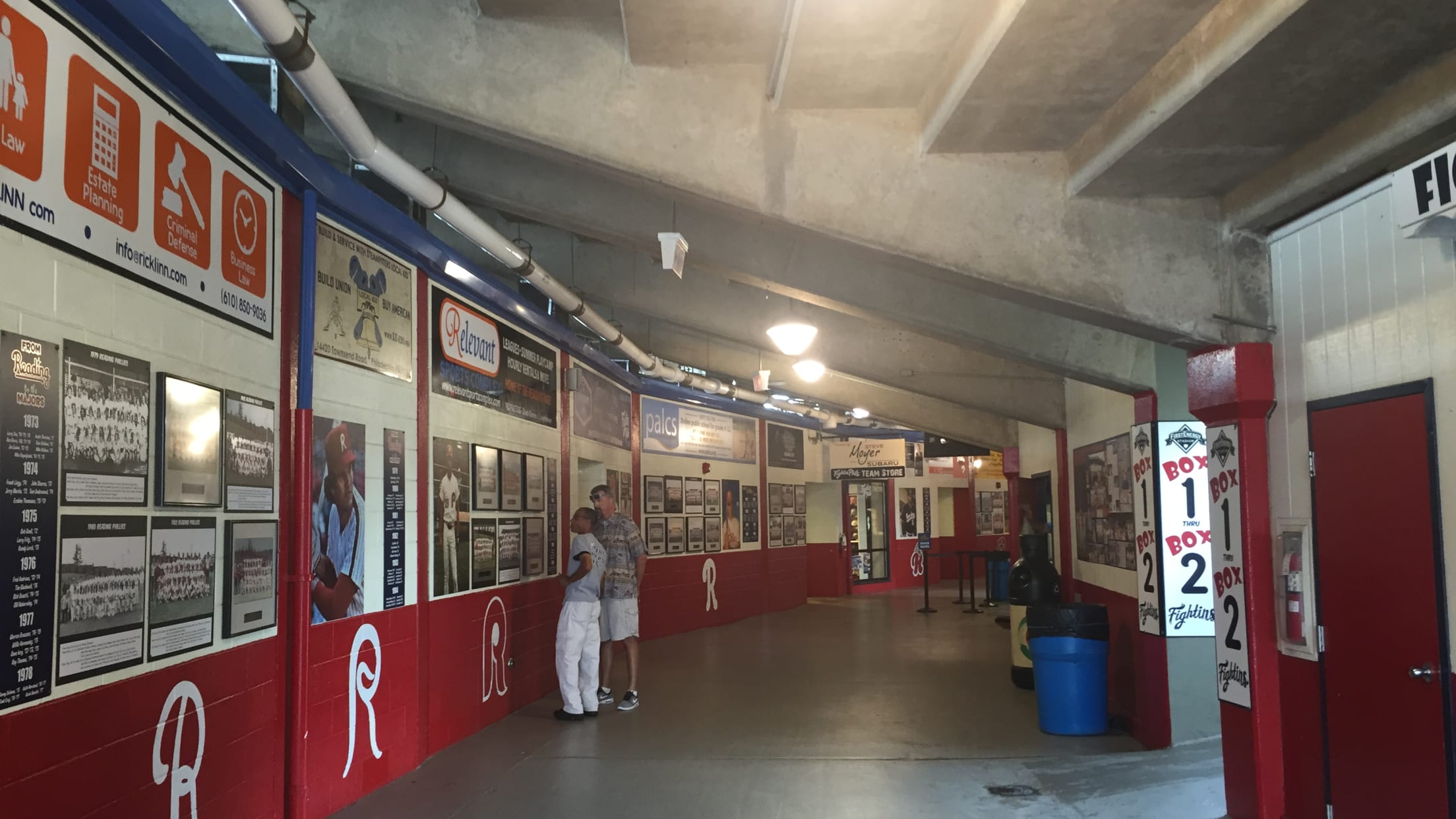 The Fightin Phils front office has done a great job maximizing the space immediately surrounding the ballpark, but all this is prelude to enjoying the ballgame itself. The FirstEnergy Stadium seating bowl, comprised of differently-colored sections, extends roughly from foul pole to foul pole. A spacious group picnic area is located down the third-base line; other group areas include a party deck in left and a pool pavilion in right. Specifically this is a heated pool pavilion, as the water temperature is a toasty 87 degrees. 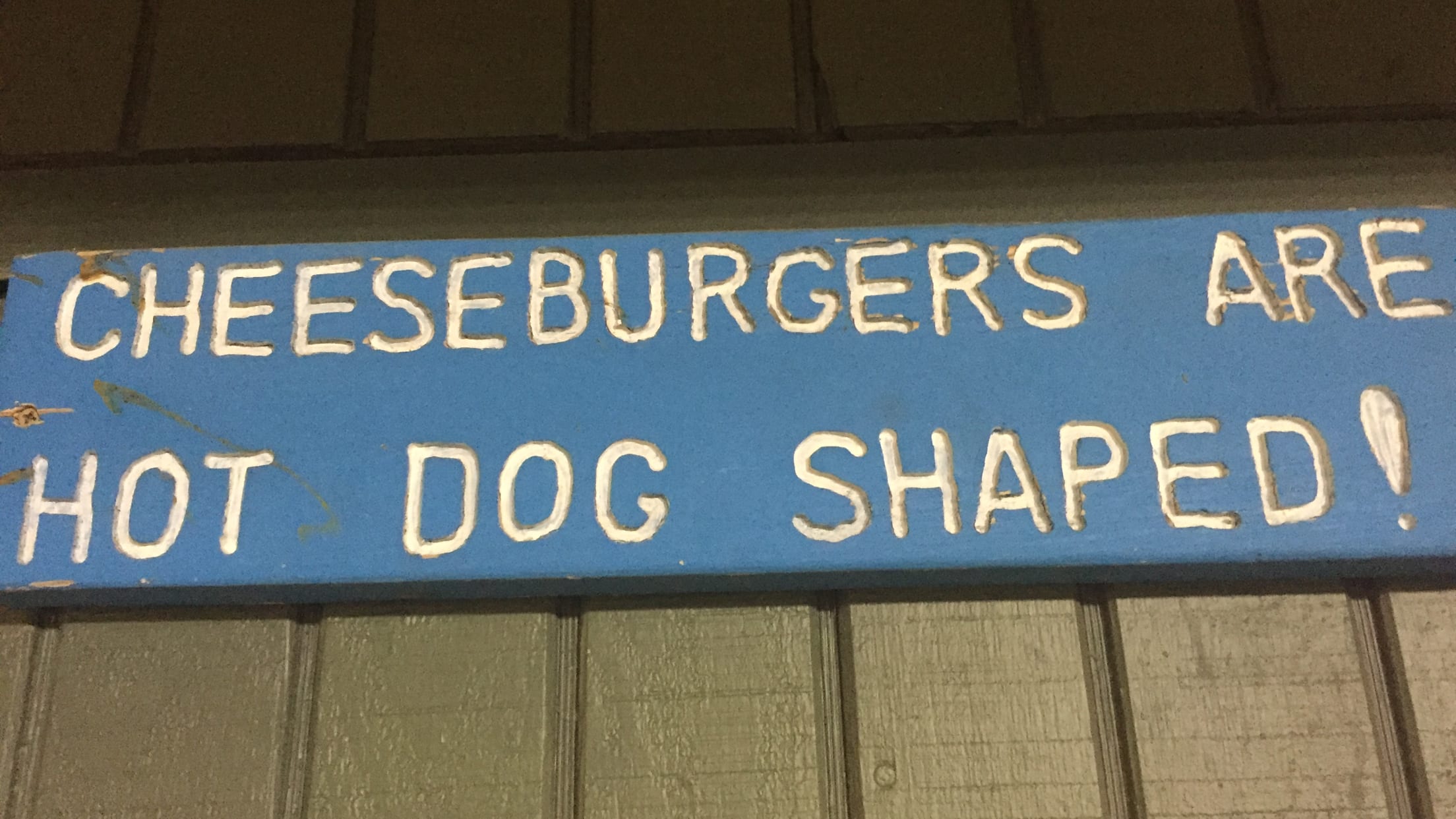 FirstEnergy Stadium is ringed with concession stands and kiosks, and there are plenty of items from which to choose. These include the Churger (a hamburger patty and chicken breast, separated by a piece of cheese), aromatic funnel cakes and Manny's Fries (a beloved spud-centric concession stand located on the concourse). Another standout is the so familiar and yet so unusual Cheeseburger Dog, a cheeseburger molded in the shape of a hot dog.

Actual hot dogs, provided by local Berks Packing, Inc. are the most popular item in the ballpark and the Fightin Phils go to great lengths to celebrate them. They even play as the Reading Hot Dogs on select Sunday ballgames, celebrating a classic American food at a classic American ballpark. In short: If you don't get a hot dog tossed to you by the Crazy Hot Dog Vendor, make sure to seek one out. 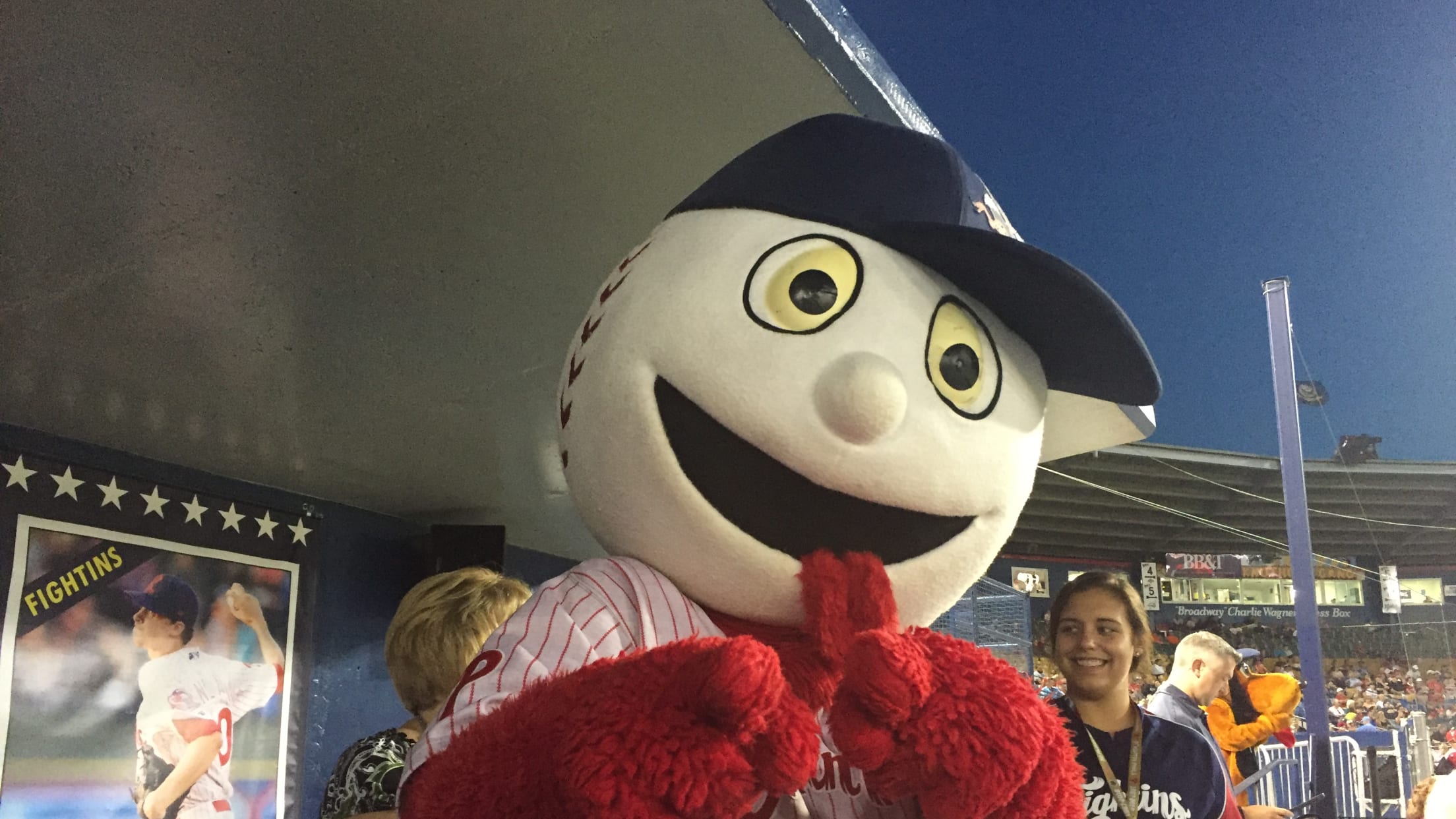 As mentioned previously, the Fightin Phils have a literal mascot band: Screwball, Change-Up the Turtle, Quack the Duck, Bucky the Beaver and Blooper the Hound Dog. All five of these accomplished instrumentalists can be seen roaming the ballpark on game days. Screwball has the most seniority and, as such, is the team's most recognizable mascot. He has red fur, googly eyes, a perpetually outstretched tongue and, most crucially, a baseball for a head. Make sure to say hello.

The Reading Pagoda is Reading's most distinctive and well-known landmark. This seven-story structure, built in 1908 as a luxury resort that never opened, is situated atop Mount Penn and offers a panoramic view of Reading and the larger Berks County region. It is to Reading what the Eiffel Tower is to Paris. 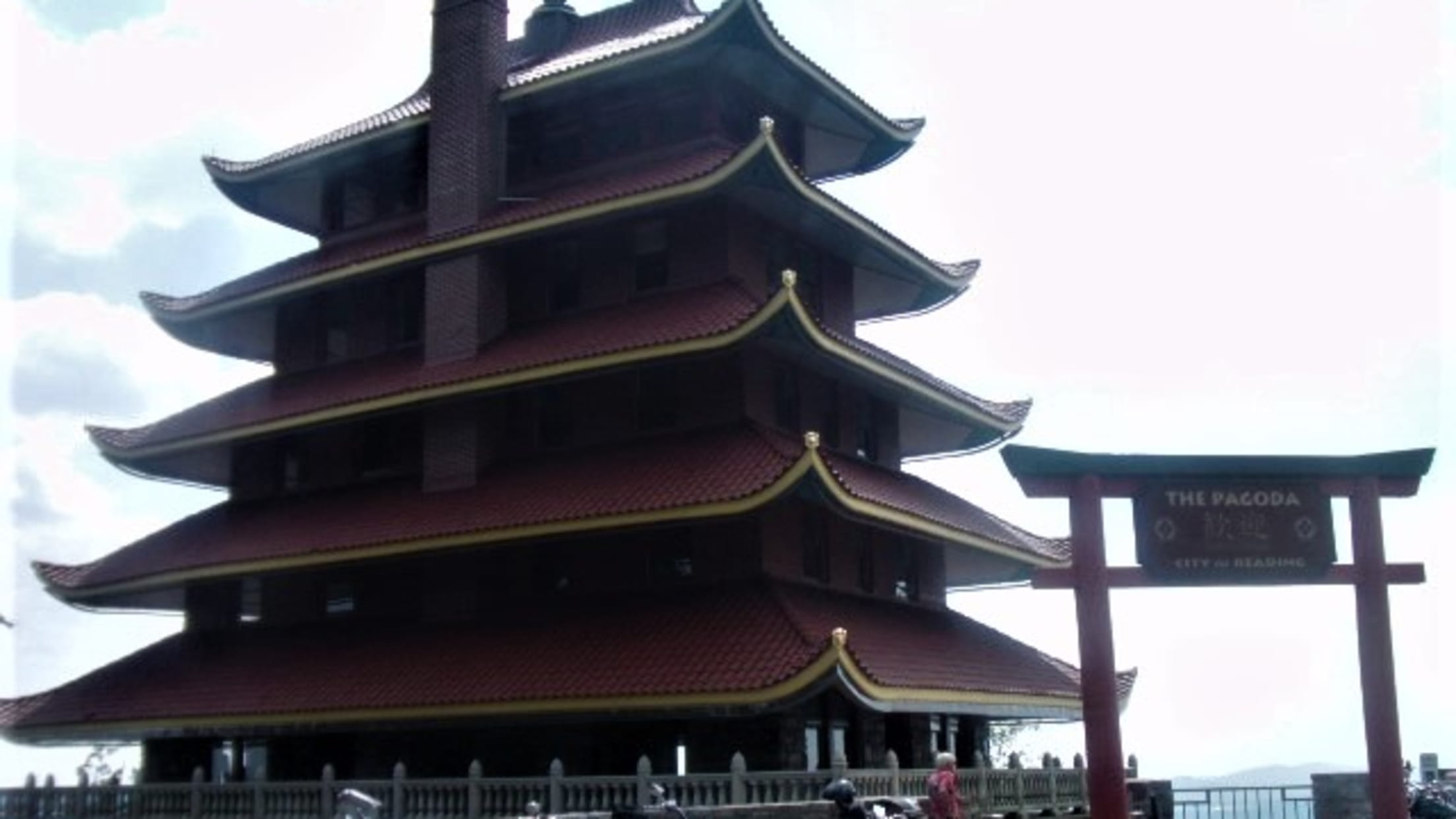 Berks County is Pennsylvania Dutch country, and as such this is a region with a deep appreciation for pretzels. Get your fix at Tom Sturgis Pretzels, a bakery and store in nearby Shillington. The Julius Sturgis Pretzel Bakery is in Lititz, approximately 30 miles to the southwest of Reading. Here, one can tour the family's original pretzel bakery. Pretzels go well with beer. Take a half hour drive to Pottsville in order to visit the Yuengling Brewery, Museum and Gift Shop. It's the oldest brewery in America, established in 1829.

The Reading Railroad has long been world famous, thanks to its inclusion on the Monopoly game board. Learn all about it at the Reading Railroad Heritage Museum, located in Hamburg. Speaking of trains, the Colebrookdale Railroad, in Boyertown offers "scenic expeditions into the secret valley" aboard restored historic cars. Further afield, but well worth the visit, is Knoebel's Amusement Park in Elysburg. It's a classic in every sense of the word, and a must for roller-coaster aficionados.

If you want to eat and drink like a local, then keep Mike's in mind. Mike's Tavern, just two blocks from the ballpark, is a warm and inviting neighborhood bar and, as such, a great option for pre and/or postgame drinks. Mike's Sandwich Shop, renowned for its cheesesteaks, is not affiliated with Mike's Tavern. It's located just one block from the ballpark and has long been a favorite of visiting players and coaches. Fightin Phils general manager Scott Hunsicker calls both of these establishments "hidden gems."

Perhaps slightly less hidden, but still a gem, is the "World Famous" Pike Café. This casual spot boasts a wide-ranging menu, dozens of HD flat screen TVs and a diverse and loyal clientele. In 2017, owner Mikey Pullano (yes, another Mike) received a "Fightin for Reading Award" from the Fightin Phils organization.

The 18-story Abraham Lincoln Hotel, a landmark downtown Reading building, has been converted into an apartment building and event space. Stop in the lobby in order to meditate on the life and times of John Philip Sousa, who died in one of its rooms in 1932. If you're looking for accommodations worthy of a world-famous bandleader, check out the The Gables at Stirling Guest Hotel located in Reading's Centre Park Historic District. Otherwise, there are numerous chain options located within a 10-mile drive of FirstEnergy Stadium.

The Reading Fightin Phils are situated just an hour away from the Allentown-based Lehigh Valley IronPigs, the Phillies' Triple-A affiliate. From there it's a short drive east to see the Brooklyn Cyclones, Somerset Patriots and, further south, the Jersey Shore BlueClaws (the Phillies' High-A affiliate). Of course, the Philadelphia Phillies themselves are located 75 miles to the southeast of Reading. An additional pair of Pennsylvania-based Minor League teams, the Harrisburg Senators and Altoona Curve, are located to the west. Or head south to check out the Wilmington Blue Rocks and Bowie Baysox. In short, options abound.

The Low-A Clearwater Threshers play at the Phillies' Spring Training home of BayCare Ballpark. The remaining three teams in the system are all located within 75 miles of Philadelphia. 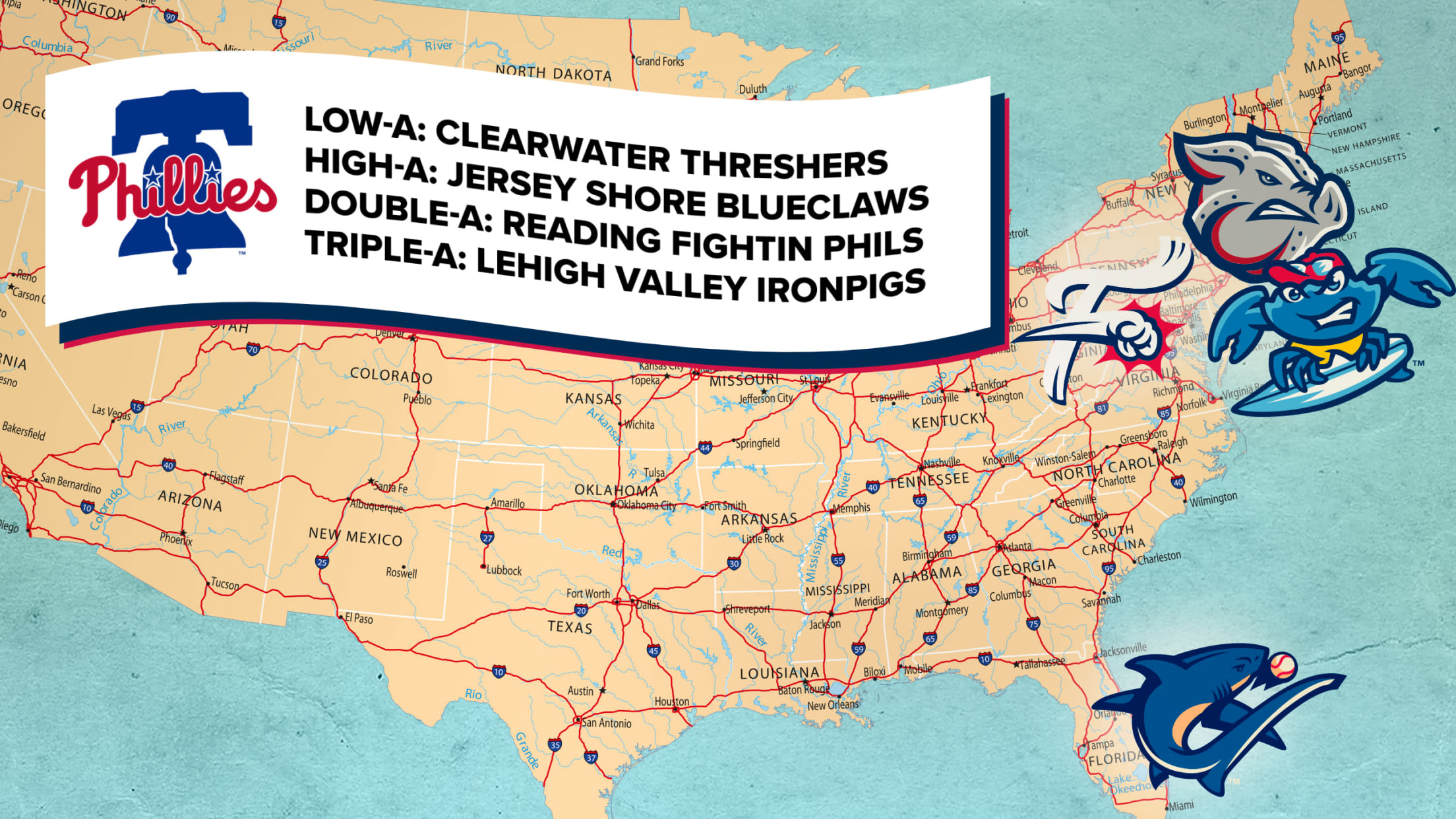